I’ve only been here 12 days and I’m already subconsciously compiling a mental list of things I’m going to miss when I go home.  Number one on the list are Tim Tams (the metro, my sweet as duvet cover, and calling kiwis “kiwifruit” are others, to name a few).  Tim Tams are these unbelievably delicious cookies – I mean biscuits – that are basically what people are referring to when they say “the food of the gods.”  I discovered the chocolate hazelnut variety yesterday and they may well be the death of me.

In other news, I’ve been to each of my three classes at least once by now, and I think I’m going to really like them all.  My environmental psychology professor is actually American and refers to everyone (students in the class, famous psychologists, inanimate objects) as “characters.”  He spent most of our first class talking about optical rangefinders and most of our second class talking about world religions, so based on that and the actual environmental psych book, I think it’s going to be a pretty cool class.  My biological psychology class has about five different lecturers coming in over the course of the semester to talk about their different areas of expertise.  Today in that class, I sat next to a girl from UC who studied abroad at Geneseo last semester!  It was such a funny coincidence; she was even on Emaline and Vishu’s floor in Steuben!  She also said she really loved Geneseo and wants to go back sometime, which was nice to hear because, after how amazing and exotic New Zealand seems to me, I’d been worrying that Kiwi exchange students would find western New York pretty boring!  Finally, I had my first te reo Māori (Māori language) class today – it’s SO COOL.  One of my flatmates, Mikaela, is in the class as well, which is nice.  I don’t really know how to say anything yet because it was just an introduction to the course, but stay tuned!  Our lecturer’s name is Phil, but he told us we could call him Philly or Bro or Cuz, and asked if we’d mind if he wears board shorts and jandals (flip flops) to class.  I would not mind.

Oh.  Bad (or completely insignificant) news, depending on how you look at it.  It appears that the majority of the New Zealand population shares my goal of morphing into Bob Dylan circa 1963, so my sunglasses are no longer cool or unique (you may argue that they are not cool or unique in the United States, but I would not listen to you).  Also, if I ever lose them, they would probably be snatched up by some cool and unique Kiwi and never find their way back to me.  This is a potential hazard that I will be watching out for.

Not much else is new right now.  It’s my flatmate Chelsea’s birthday today, so we’re having a little shindig tonight.  Katharina and I made Tim Tam ice cream cake.  It’s really a masterpiece.  I guess this was more like a long, drawn-out monologue about loving Tim Tams, rather than an actual ode – Meg, maybe I could commission you? 🙂 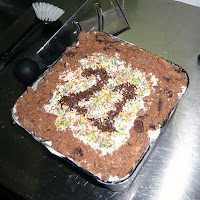 3 thoughts on “An Ode to Tim Tams”