I’ll get to why today is Opposite Day in a moment, but first I have to catch up on yesterday.  I opened the shop with Susannah yesterday morning and worked until noon, and then had Townes for the afternoon again!  Townes always calls it “Fun Day,” even if we just do something for the morning or afternoon.  It was hot, muggy, and smoky out yesterday, so we decided it was a good afternoon for an indoor activity – so for this Fun Day, we went to the Roanoke Island Aquarium!  I had never been, and Townes hadn’t gone since last year, so he was really excited to go again and to show me around.  We had such a fun time – Townes wanted to jet straight to the big shark tank as soon as we got there, of course.  There happened to be scuba divers in there right then who were hooked up to underwater microphones and would answer audience questions from inside the shark tank!  So cool. 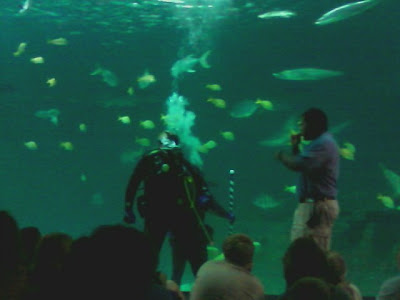 Townes asked if they name any of their sharks.  Dean the Diver told him that they don’t, because they try to treat all their sharks as true wild animals and naming them would mean treating them more like pets.  After hearing that, Townes leaned over and whispered to me, “Well, Shadow is definitely not a wild animal!”
After the shark tank, we hightailed it to TR’s second-favorite exhibit: the river otters!  They were so cute and playful and energetic, and were swimming around, flipping underwater, jumping off things, and generally showing off nonstop while we were there!  Townes couldn’t get enough of them and kept giggling when they’d  do a flip, and giving me advanced notice when one of them was about to swim near us again. 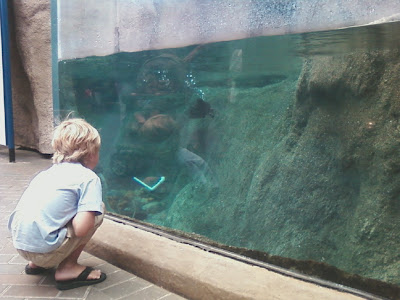 How cute is he?!?
We made the rounds of the rest of the aquarium (TR had no interest in checking out the gift shop, which I was very impressed with – my six-year-old self wanted to check out every gift shop in existence), and then got back on the road so we’d have plenty of time to make it back over the bridge, even with the horrendous afternoon traffic still residual from Fourth of July weekend.  During the half hour or so it took to get from Manteo to Nags Head, Townes and I kept track of all the state license plates we saw.  When I mentioned that we could count mine, too, since we were in Perry, he exclaimed, “Yeah!  Let’s count the Subaru’s license plate!  New Ork Geneseo!”  Ah, what a state that would be…
There are obviously lots to choose from, but one of the reasons I value my time down here on the Outer Banks so much is the opportunity I’ve had to spend time with Townes.  I would not be a regular part of his life at all if it weren’t for my summers down here, and I just love him to death! 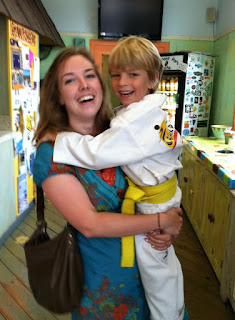 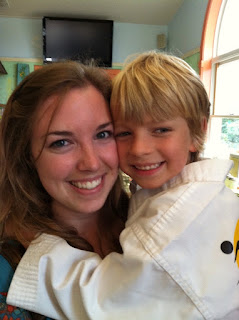 I dropped Townes off at Tae Kwon Do, and then headed home for a relaxing and uneventful evening.  I had to be in bed early to open the shop again next day, so I just curled up on the couch and watched The King’s Speech.  I know, I know, I totally missed the boat on that one, but at least I saw it eventually!  Anyway, it completely surpassed any expectation I’d had of it, and I finally understood all the Oscar hype!  It.  Was.  Incredible.  Colin Firth and Geoffrey Rush were both unbelievable as actors, and it was just such a good film.
Today I was up at 4:45am and in the shop by 5:15 to open by myself for the first time.  It went really well, and Susannah was in around 6:00 as first backup.  It was a pretty slow morning and we spent lots of time just hanging around and chatting.  We were talking about our family reunions at Piseco Lake, and how Susannah took me wakeboarding on my eighth birthday by letting me stand between her feet on the board.  She’s sort of doing the same now at Front Porch!  Anyway, the dead early morning was followed by a completely opposite, absolutely insane late morning rush!  The café, pottery studio, and bead store filled up instantaneously and we were running around like madmen taking care of everyone and everything.  It was never unmanageable, though, and even though I ended up staying until 1:30 instead of leaving at noon as scheduled, it was a great morning and a satisfying feeling to get through a challenge like that at work knowing you’ve done well!
Having worked more than eight hours before it even struck 2:00pm, I wanted nothing more than a relaxing afternoon.  I wanted to sit somewhere with my laptop and a book, listen to good music, and catch up on letter-writing.  In short, I wanted to hang out at a coffee shop!  I certainly wasn’t going to risk being put back to work, though, so I put on an oversized hat and dark sunglasses so nobody would recognize me and drove up the bypass to – gasp! – Starbucks, where I am now.  My head keeps snapping up every time the door opens, because I’m so afraid someone is going to catch me cheating on Front Porch!  I actually had to think long and hard about whether any of my OBX acquaintances read my blog – I don’t think they do – before I even posted this!  It’s a (mostly) playful rivalry.
Well, my battery and my iced soy latte are about equally drained, so I’m going to head home, plan dinner, and sit out on the deck.  In contrast to the gross mugginess of the past week or so, we had a wonderful rain shower a couple of hours ago, so it’s nice and cool right now – I’m actually wearing jeans for literally the first time since May.  It really is Opposite Day!