For the most part, I have a pretty regular routine down here – sleep, work, beach – but this past week has brought about a few special events that were definitely not business as usual. 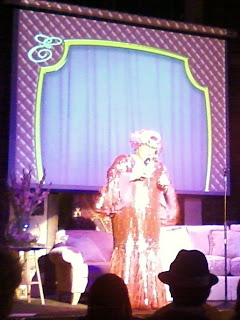 Last week was the first annual OBX Pridefest, and the level of brightly-colored camaraderie was accordingly high.  I met so many wonderful, friendly customers who were visiting from out of town for the Fest – my favorite was a 50-something man, clad head-to-toe in orange tie-dye, who asked me to help him find the Front Porch Facebook page on his iPad so he could “like” us while he was still right there in the shop.  There were plenty of events going on up and down the beach all weekend, but given that I was working the early shift most days, I didn’t partake… until the last night.  Even then, I was working at 6:30am the next morning, but Maria told me that I was being lame and convinced me to go out with her.  So we went out to the grand finale of OBX Pridefest: Dame Edna at the Brewing Station.  I’d never heard of her before, but apparently Dame Edna is a well-known comedy character and is now played by many different people all over.  This Dame Edna was actually Michael Walters, a very normal looking guy who had come into Front Porch himself to put up flyers for the “Elegant Evening” a few days earlier.  He’d been wearing a t-shirt and board shorts then, so it was pretty funny to see him in a floor-length dress, purple wig, and two-inch red fingernails! 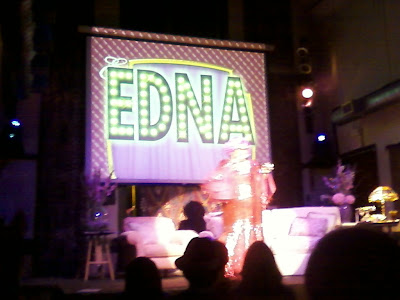 Michael as Dame Edna was hilarious, and also happened to have an absolutely incredible operatic singing voice!  The funniest part was that you could tell that he was a really unbelievable classically-trained singer, but that during the show he was singing really goofy songs, either in style or subject matter.  My favorite was when he sang “Hello, Dolly!” as a duet between Carol Channing and Louis Armstrong – but he sang it by himself, doing impeccable impressions of both parts!  Maria and I were laughing hysterically and simultenously marveling open-mouthed at how honestly talented the guy was!  I also made new friends named Paul and David, who were visiting from Virginia Beach and came to Front Porch for breakfast and to say goodbye the next morning!  How sweet.

We had another treat a couple days after our truly elegant evening with the Dame.  Our representative from the Republic of Tea, Gary, came in to Front Porch Nags Head to give our staff a personal tea workshop!  It was really fun – I got to try seven or eight different teas, and I learned SO much!  We stock, sell, and make a ton of different varieties of Republic tea at Front Porch, but I’ll admit that before this workshop, I did not have much knowledge to share with customers other than what was black, what was green, what was regular, what was decaf, and which tea was my favorite.  No longer!  Gary taught us about the differences between black, oolong, green, white, red, and herbal teas, the many varieties that are available of each, and how to brew each to perfection.  I honestly learned more than I could reasonably share here, but I’ll give you the highlights and some of the things I found the most interesting!

I could go on and on, but I’ll stop there!  The most important thing I took away was how completely essential an exacting brewing process is to a good cup of tea.  Gary intentionally brewed one tea for us to try for too long – about eight minutes – and it was unpleasantly bitter and vegetable-y tasting.  He then made another pot of the tea, infused for about three minutes, and it was absolutely lovely and fragrant!  I couldn’t believe what a different a few minutes made, and it made me see the error of my tie-the-teabag-around-the-mug-handle-and-leave-it habit… although I can’t say I’ll likely change that for my nightly cup of cheap-o generic English breakfast tea (and yes, I recognize the irony of a nightly cup of breakfast tea).  I learned so much about tea that was extremely interesting in its own right, but has also been useful even in the few days since with customers who are looking for a cup of tea at the shop!  I even ended up talking with one lady about the teas we carry and what I’d learned at the workshop in such detail that she asked for my email address and sent me some information about a series of mystery novels that are all about tea!  Too funny – I’ll have to look them up once I finish (er… once I start, then finish) The Bone People.  I’ll stop rambling obsessively about tea before I run the risk of turning into Professor Trelawney and seeing death omens in my tea leaves from looking at them for too long.  I’ll leave you with a few recommendations, if you happen to be in an area that sells or steeps Republic of Tea!  My favorites were Jasmine Pearls, Açai Green (delicious iced!), and Milk Oolong – the last Gary described as “positively the most silky sip of heaven” he has ever tasted, and I have to agree.
Compared to a drag show and a lesson in tea school, the rest of the week was less noteworthy, but nonetheless enjoyable!  I finally got Perry a good car wash to rid him of the salty, sandy topcoat he’d been developing, had a great family day at the beach with Paul, Suz, and Townes, and went to First Friday in Manteo with my visiting best friend from preschool – blast from the past!
Now it’s time to try and catch a view of any number of fireworks displays from the deck, before going to bed early in preparation for what will surely be a very hectic holiday tomorrow at work!  Happy Fourth, everyone!