Hi friends!  It has certainly been a while, and I have no excuse other than the usual: I’ve been BUSY!  Here’s what I’ve been up to…


I passed my barista test almost two weeks ago, so I am now the real deal!  Baristas are the senior employees on each shift so I’ve also been in charge of my closings and taking the bank deposit.  I’ve also been trained on opening the shop by myself, gotten store keys, and taken over inventory for KDH.  It’s been a lot of new responsibilities all at once, so work has been busier than usual.  I’ve really been enjoying it, though – it’s a good feeling to know that Paul and Susannah trust me and rely on me, and I also like that I’m still learning new things on this job, even after so much time!

I went to Asheville!

Get ready for more photos from my dazzlingly inept camera phone!  I had a glorious and previously unheard-of FOUR DAYS OFF from work last weekend to go visit my old roommate, Abby.  Abby (and her daughter, Haley) and I were roommates during my previous two summers on the Outer Banks.  We didn’t know each other before I moved in, but we worked together at Front Porch and quickly became really close.  Abby moved to Asheville, North Carolina at the beginning of the summer to pursue a career in baking (she has a culinary degree in baking).  I’m really excited for her, because she has been wanting to get into this field and also to experience somewhere other than the beach, where she’s lived all her life… but I’ve also really missed living with her and Haley.  Haley is spending the summer here on the Banks with her dad before she moves to Asheville with Abby permanently in August.

Almost as soon as I got down here this summer, Abby and I started planning a visit.  Since Abby and Haley have also been apart since Abby moved out there, we thought it would be fun for Haley to come with me for a few days.  It finally worked out for last weekend, so I packed up Perry, picked up Haley from her dad’s, and we were off!  We made the eight-hour drive on Saturday, and Haley was great.  I won’t lie, there were copious amounts of soft-serve, Happy Meal toys, and pit stops at Chik-Fil-A playplaces involved, but I couldn’t help myself from spoiling her!  We got to Asheville on Saturday evening, while it was still light enough to take in the beautiful views.  I love the beach, but I really miss the mountains when I’m down here. 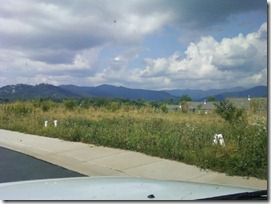 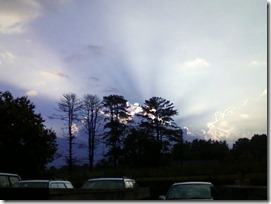 I won’t go into über-detail about my time in Asheville, but it was wonderful.  We spent the days exploring the area – Abby showed Haley and I her favorite coffeeshop and her new workplace, Haley got to pick out some things for her new bedroom in their apartment, and I walked around the Sunday open-air markets downtown.  Asheville is very unique and pretty hippie-dippie, but it’s a really cool place.  Everyone sort of does their own thing and nobody else thinks anything of it.  Every restaurant and café has vegan and gluten-free options, and of all the couples I saw walking around, I’d estimate that 90% of the boyfriends had much longer hair than their girlfriends.  Everybody was extremely friendly, and openly so – waves and shouted hellos, even to strangers, were commonplace.  On our last day, we went hiking on the Blue Ridge Parkway with Abby’s family, who were visiting for the day.  It was a perfect day and a gorgeous hike! 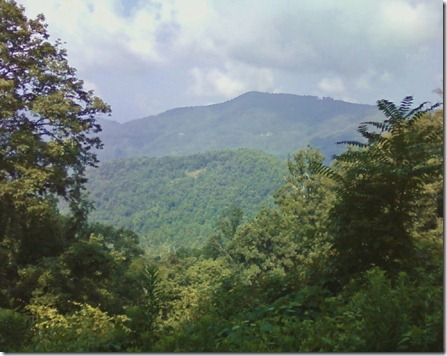 Abby, Haley, and I spent the evenings just hanging out at their apartment.  Haley played while Abby and I laughed and chatted, and we watched four Harry Potter movies in the three and a half days that we were there.  It was just like the good ol’ days of living together and made me realize again how much I miss them!  Finally, on Tuesday, it was time for Haley and I to buckle down for another eight-hour drive, which we accomplished relatively painlessly with the help of Haley’s chosen playlist – I swear that girl must have been the DJ at the IB in another life.  After many hours of buckled-in dancing to Ke$ha songs in the back seat, she crashed hard… and soon enough, we were home! 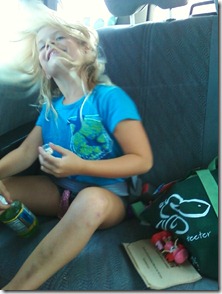 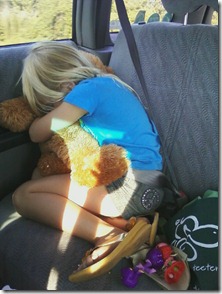 I’ve been thinking a lot lately about my original plan to leave the Outer Banks and go home to New York in mid-August, as usual.  This was a great plan for the past two summers, and I always felt ready but not overly eager to leave.  However, it just hasn’t felt like the right decision this time around, for a few reasons.  First of all, that timeline was always predetermined by the fact that I had to be back in Geneseo for RA training in the middle of August, so that’s when I had to leave – not so now!  Second, on a similar note, I always had something specific to go back to – again, that’s not really the case at the moment.  I’m in the middle of trying to figure out what I want my next step to be following graduation this past May.  Though I know I want to go to grad school within a year or two, and have a good idea of the fields I would be interested in, I’m not quite at the point where I’m ready to dive in to that yet.  There are still little doubts creeping around the edges of my plans that need to be taken care of.  At the moment, I have a job that pays me well, provides me with excellent work experience and the challenge of new responsibility, and the chance to work with people I truly love being around.  Why would I give that up?  Yeah, I couldn’t come up with a reason, either.  Contrastingly, I realized I could think of multiple reasons that I should stay down here a little longer.  Among them: I love it here; this is the last stretch of time I will be able to spend such quality time with my family and friends down here; whatever I end up doing next, saving money is a good move; and… Kacey is having her baby in October!
So that’s it.  At the moment, I’m planning to stay until late October or early November.  I’m already happy thinking about the prospect of having a few more months here, but am also content with the thought of going home in time for the holidays.  This also means that there are a few more months for you all to plans visits down here – get crackin’!
And finally… I’m going sailing!

I’ve been considering staying longer for a few weeks now, but the official decision came about a few days ago, when Paul and Susannah had me over for dinner the night after I got back from Asheville.  They officially asked me if I would consider sticking around, and it was just the extra little push I needed to tell them that I’d been thinking the same thing, and commit to it.  They also filled me in on the second part of their proposition.  The three of them (Paul, Suz, and Townes), are planning to charter a two-cabin sailboat for a week in September, and sail out of Annapolis, Maryland, back down to the Outer Banks – and they invited me to go, too!  It meant so much to me that they would ask – it’s clearly such a family thing for them to do, but I could tell that they had no hesitation about asking me, and genuinely consider me part of the family.  It was a nice reminder, as I sometimes get caught up in our working relationship!  Anyway, I’m SO excited.  I’ve always wanted to go sailing like this, and I can’t wait.  I found out today that Chip and Tammy are going to be sailing around the same time we are, so we will be able to meet up with them in harbor somewhere!
I need to try to update this more often, so I don’t end up with such a laundry list of things to write about each time.  Well, thanks for plugging through this… that’s all, folks!