I can’t even bring myself to explain it this year.  Just go read this post from last January and insert “Rafael Nadal” for “Novak Djokovic.”  How unfortunate, I’d just started to like Nadal, too.

Speaking of Nadal, it is ironic that he’s the source of the worst thing that’s happened all week and also the most hilarious (okay this apparently happened on January 2nd but I only just saw it): 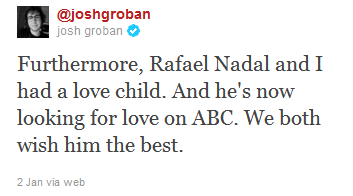 HAHAHA.  It’s funny, because it’s true!  And also because Josh Groban said it.  True story: when Ben got out of the limo on the first night of The Bachelorette last season, I told my mom that he looked like Nadal.  Throw the Grobester (just made that up, it’ll catch on) into the mix and you’re looking at the ultimate triple threat: singing, tennis-playing, and wine-making.  Bam.

My blog posts appear to be trending towards being increasingly pointless.  Maybe I watch too much TV.