Holy hiatus!  I’m back.  I went to New York for four days for my friend Sara’s wedding, and apparently my brain had a hard time catching up upon returning to the OBX.

The pictures I caught on my camera are very few and far between, and pretty random… come on, I was otherwise occupied.  I’ll share a few of the professional photos when they come out, but for now, here is my rather odd photographic account of the trip.

Well, the wedding weekend went swimmingly, all things considered.  Us five bridesmaids and Sara had a PJ party and girls’ day on Friday, the day before the wedding.  Jackie, one of the other bridesmaids, was kind enough to host us at her house.  Her parents popped in to say hi at one point – they are super funny, and also give new meaning to the phrase “hardcore fans.”  Higgins family, avert your eyes. 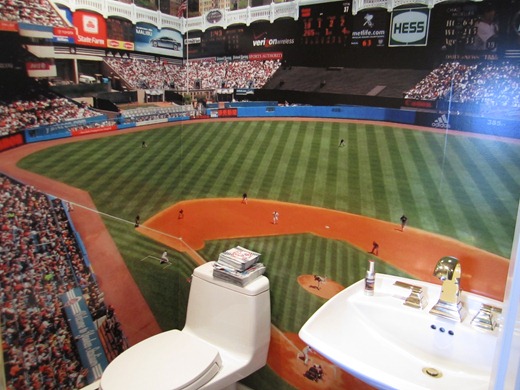 Why yes, their entire bathroom is papered with a 360-degree panorama of Yankee stadium.  (Check out the New York Yankees napkins on the back of the toilet that serve as paper towels.) 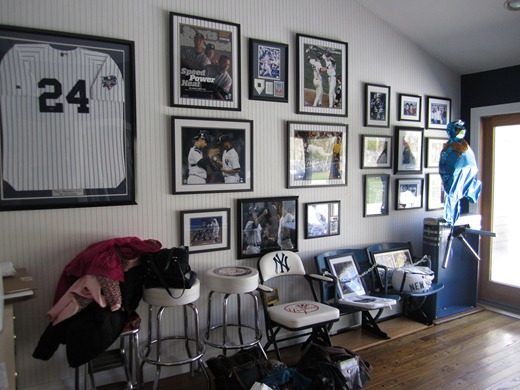 This is one wall of their home office.  Pinstriped wallpaper, more Yankees memorabilia, and in the far corner you’ll notice two seats and a turnstile from THE ORIGINAL Yankee Stadium.  I don’t even care about baseball and I have to admit that’s kind of cool.  The one thing I didn’t get a picture of was the pinstriped car (yup, for real).  I was on Long Island, after all.

Anyway, the day of the wedding was hectic and exciting and stressful and crazy and a lot of fun, all at once!  I had to figure out how to do a lot of maid of honor stuff that I had no idea how to do before, just because something needed to be done and I realized I was the one who was supposed to do it!

Lacing up!  This was after folding pocket squares and hairspraying bangs and pinning boutonnieres… phew, there was a lot goin’ on.

The ceremony was beautiful.  I just had to take Tom’s (the best man’s) arm in a very quaint old-fashioned way and go around wherever he led me, rather like dancing, so that wasn’t too hard.  It’s a very strange and lovely thing to watch one (or two) of your friends get married.  It made me feel old and young at the same time.

And then they were married and the dancing began!  The reception was at The Historical Thatched Cottage (Am, I thought of you – I guess the place is just old, not important) right on the water, and it was an absolutely picturesque day. 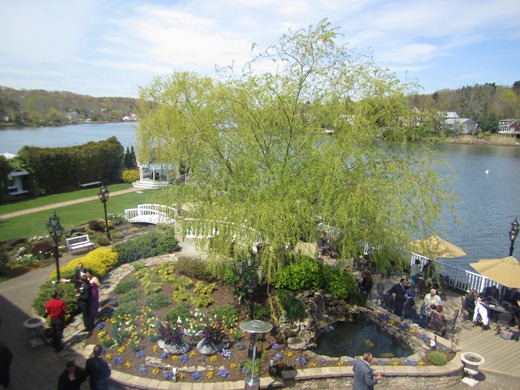 There was eating and dancing and cocktail-drinking and toast-giving (not in that order, don’t worry… I gave my toast and then got toasted.  JUST KIDDING but that was pretty good, you have to admit).  There also was a minor snafu with a certain two gentlemen mixing up their placecards even though I specifically told them not to… 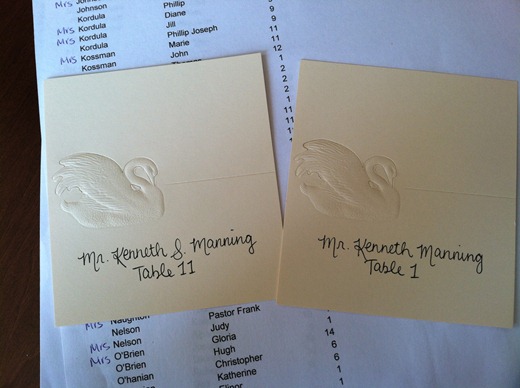 Yep, my dad and Sara’s dad have the same name.  It’s confusing.  I addressed it in my toast.  To his credit, my father did not go and sit at Table 1 for the bride’s family, but Sara’s dad took my dad’s card… I think he was trying to shirk some of the responsibility of the day.

Anyway, we figured it all out in the end and moved on to taking the most epic picture of the wedding weekend: 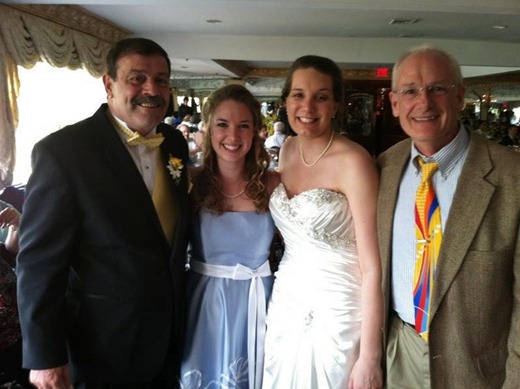 A couple of Manning girls (well, Sara was not technically a Manning girl anymore by the time this picture was taken) flanked by their Ken Manning dads.  We switched the sides up just to confuse you.

By that point, everyone was done with their responsibilities and just got to have fun – bride, groom, wedding party, families, and guests alike.  Well, actually, a maid of honor’s work is never done, especially when the bride is wearing a 40-pound gown and needs to pee.  I have a really excellent picture of that process, in fact, but I thought it best that I not post it on the internet.  I’d like mine and Sara’s friendship to at least last the honeymoon.

One thought on “A Wedding on the Guyland”