A couple of days ago, Amity and I decided to take a little jaunt into the city and find our schools.  Amity’s campus is in Kensington – actually quite close to where we were wandering on our first day in London, although we didn’t realize it at the time.

I’m quickly finding out how completely chock full of history London is.  You can’t go anywhere without happening upon something interesting or of significance.  For example, while walking down a relatively quiet side street on the way to find Amity’s school, I noticed this little blue plaque on the plain brick building opposite: 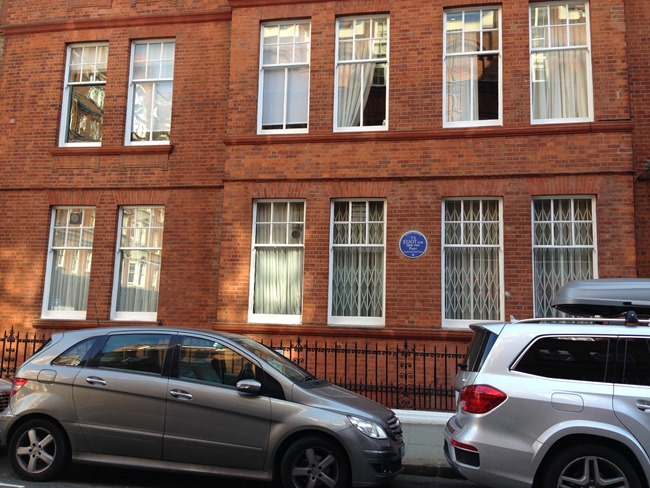 Shall we zoom in a bit? 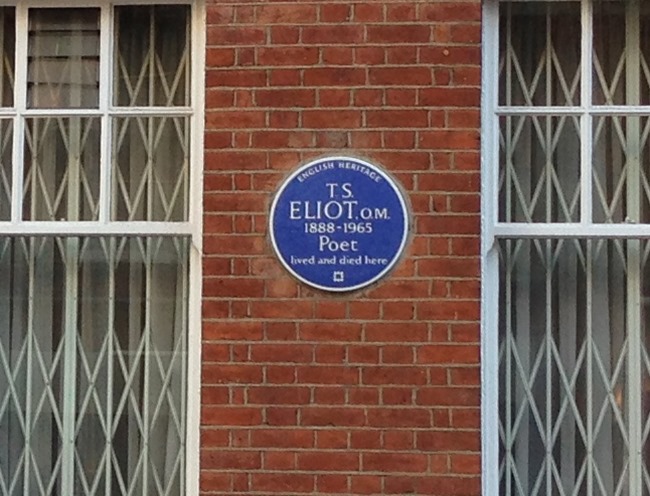 T.S. Eliot lived and died here.  SO COOL!  It was just a regular street with business people’s cars parked along it, no tourists crowding to take photos… we could have walked right by it without noticing!

Speaking of which, our next stop was my university, and we later realized that it’s located right next to (and we therefore walked right past) the Twinings Museum and Shop, which boasts the authority on all things tea.  And that’s really saying something in England, you know.

The London School of Economics is very centrally-located, in the borough of Westminster (which is right in the heart of London and home to all the big attractions).  Despite that, it has a lovely shaded entrance onto pedestrian-only Houghton Street. 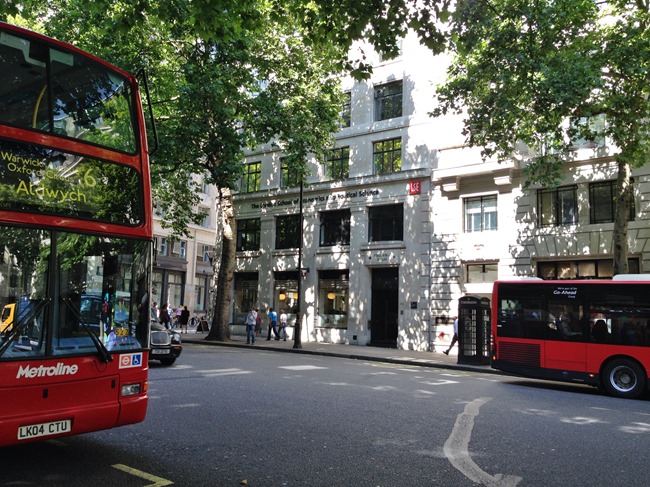 We walked through and found the Old Building, which houses the Student Services Centre.  It was quite busy because I think there have been a lot of confused international students (such as myself) arriving lately, so we just popped in to grab a map and headed out again. 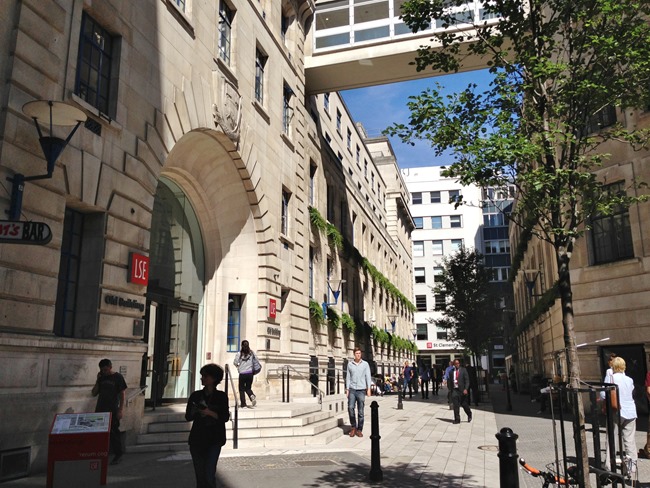 We wound our way around the outside perimeter of campus to find Clement House, one of the academic buildings, which will make me think of my favorite Clement every time I visit it:

It’s a seriously cool building – the front staircase has raw brick walls and open wooden stairs which are sort of 70s, in a cool way… (never thought I’d hear myself say that) 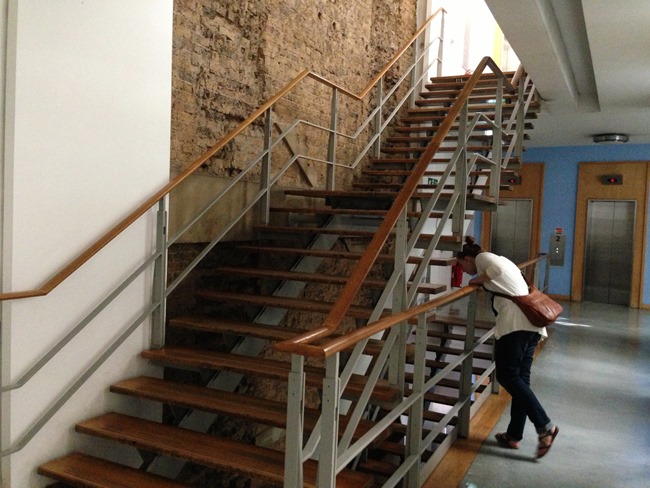 …and the entrance to the Hong Kong Theatre (still inside Clement House), where my programme registration will take place, was even cooler.  Amity said the stained glass roses reminded her of Beauty & the Beast, which is true! 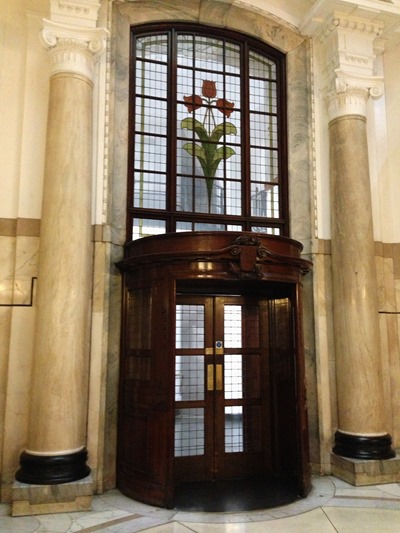 The inside of the theatre was beautiful, with light streaming in from the upper windows.  It immediately made me think of the courthouse in To Kill a Mockingbird.  I mean, not exactly.  I don’t recall Gregory Peck using a computer screen.  Maybe it’s just because of the balcony, I don’t know. 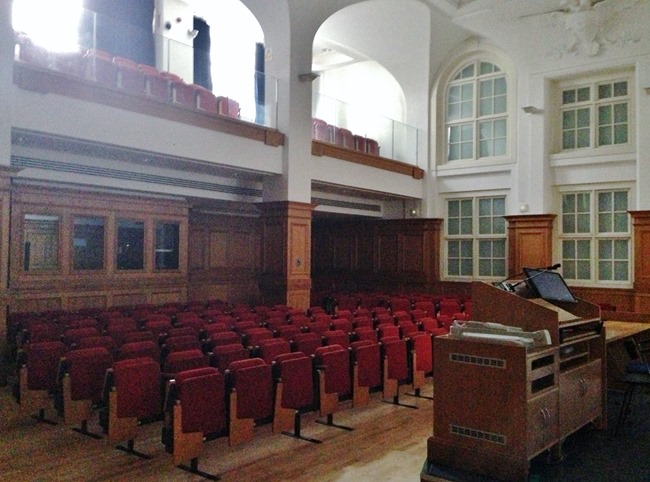 After our self-guided tour of LSE, Amity and I decided to walk along the path on the north bank of the Thames, since we were so close.  It was bright and sunny again – we’ve yet to experience the typical London weather patterns, but we’ll take it for now. 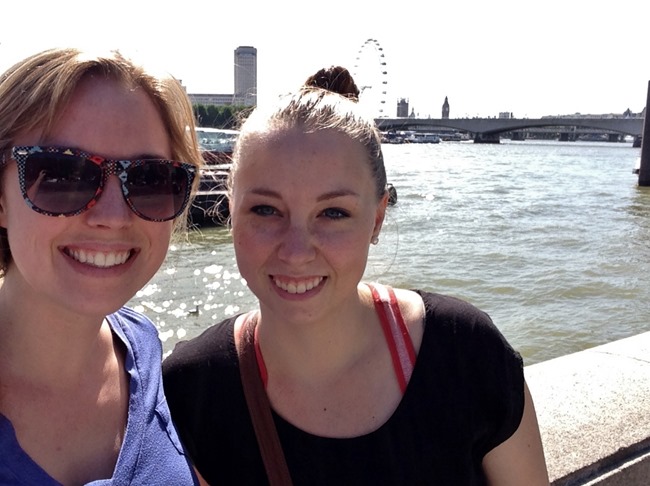 The Thames is actually quite smelly in places (or maybe just because it was so hot? ew), but it was still a good walk with wonderful views.  We walked directly across from the London Eye, which we’ll definitely go on at some point, but probably not until later in the fall to avoid the long lines. 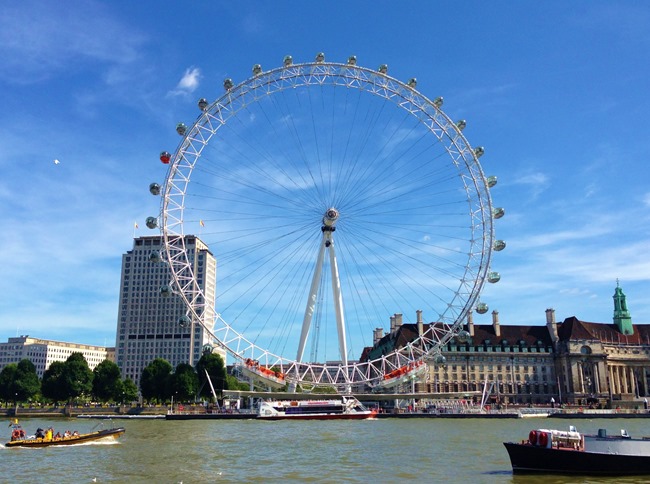 We strolled across Westminster Bridge without looking around so that we could turn about at the end at get a perfect view of Big Ben and the Houses of Parliament (which really are quite impressive). 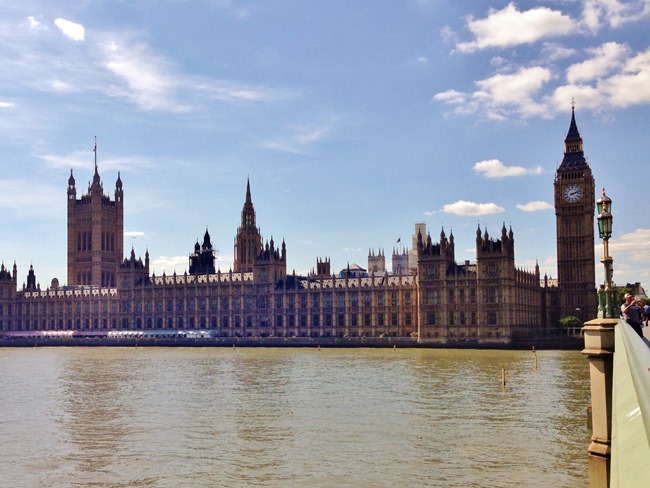 Then we headed back in their direction and passed Big Ben to see Westminster Abbey: 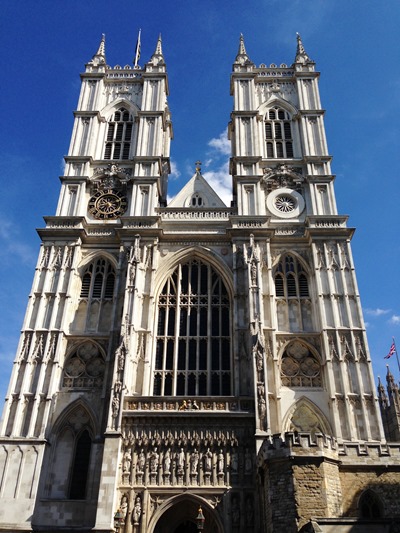 There were no residual signs or markings commemorating the Royal Wedding, but I suppose that to a thousand-year-old church, that really was not the most exciting thing to ever happen to it.  I’m sure somewhere there was a petition started to embed a paving stone with an imprint of Pippa Middleton’s royal derriere instead of celebrity handprints, but it’s nice to see that they’ve preserved the sanctity of the place.  Not that her bum isn’t worshipped by some, I’m sure.  Moving on.

From the Abbey we carried on into St. James Park, which was home to lots of funny swans and some very impressive pond bubblers. 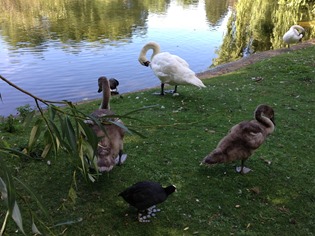 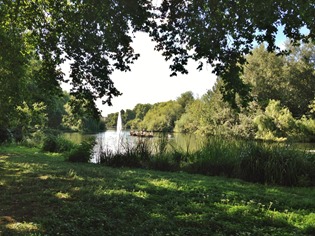 This was also about where we decided that all this walking really did call for an ice cream with flake.  What is flake?  We weren’t sure, so we decided to order it.  It turns out to be the standard basic soft-serve topping here, like sprinkles in America.  It’s a big stick of feathery, flaky chocolate stuff, which I happen to remember from my tour of the Cadbury factory is actually a byproduct of the chocolate-making process, though that makes it sound considerably less appetizing.  Don’t think about it like that.  Just concentrate on how cute Amity is. 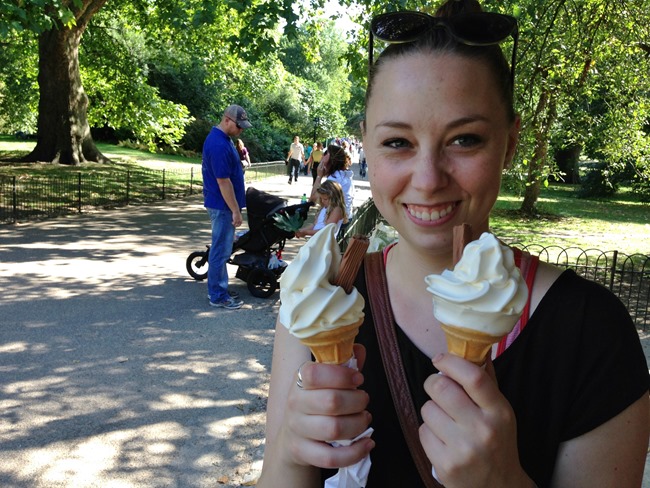 Feeling muchly refreshed, we wandered on down the edge of the park to Buckingham Palace.  There were a lot of people, but it really wasn’t terribly crowded overall.  It was blazing hot, though, so we scurried up to the gates and took refuge in their shade. 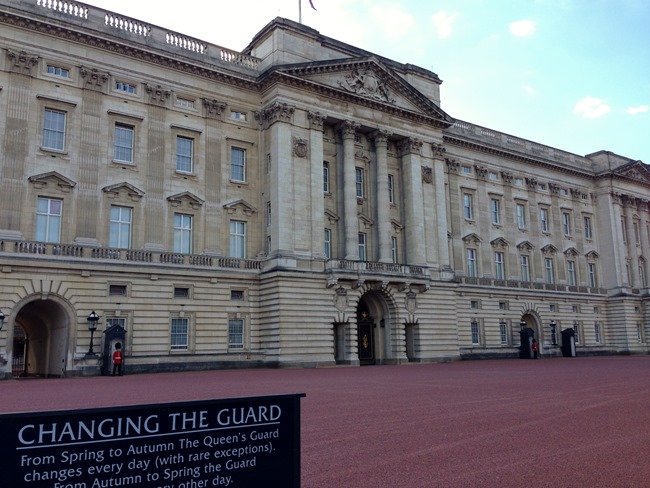 They weren’t changing the guard that afternoon, but we did enjoy watching the one on the left pace and stomp about when his legs got stiff. 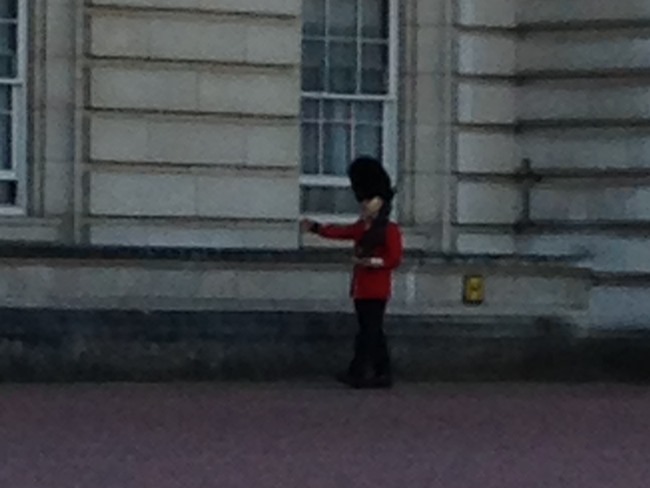 I liked this dude.  I really feel that he had a sense of humor.  Much more so than the guard on the right.  You know how sometimes you just get good vibes from a palace guard?  I’m sure it’s happened to everybody.  It was like that.  This little tourist liked him so much that he monkeyed right up the gates to get a better view: 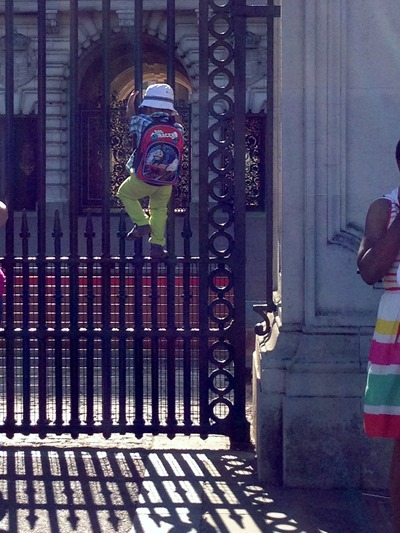 We left the palace and hopped across the street to Green Park, where we had a nice long sit in the shade by the Canada Memorial (if you’ve caught on, our afternoon mostly consisted of darting from shady spot to shady spot).  There was a sign there which specifically said “For your own safety, please do not climb or walk on the memorial.” 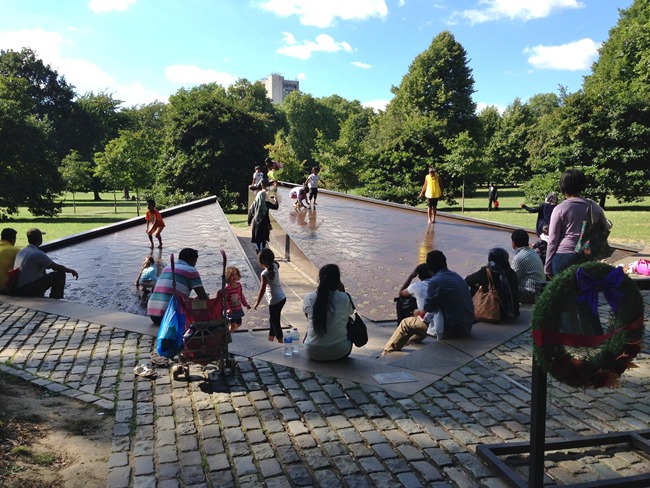 Yep, we saw a lot of people fall smack on their backsides.

And that was about the end of our walking tour of Westminster!  The afternoon was most definitely a walkabout to see the outsides of a lot of the famous London attractions.  Amity and I wanted to fit more things in, and not spend a lot of time at each one, to see more of the area.  We’ll definitely go back for the internal tours and attractions of many of these places, but we can wait until the summer tourist season ends and things aren’t as busy.  Ah, the luxury of living here!