…is probably what every person who has ever visited St. Paul’s Cathedral and then blogged about it has titled their post.  Oh well.

This past Sunday, Amity and I went to church in the borough of Islington, and afterwards decided to take advantage of being out and about in a new (to us) part of the city by exploring a little more.  We hopped on the tube at King’s Cross and rode it in to the City of London.  Sidenote: still trying to figure out how I’m going to keep track of that.  The City of London is the very old, original, central part of London.  According to Wikipedia, “The City of London is a city within London.”  Gee, thanks.

We got off at the stop for St. Paul’s and, as you can imagine, the historic cathedral is easy to find once you’re on the street. 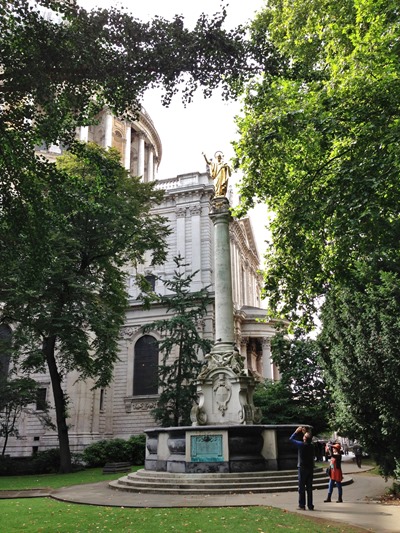 St. Paul’s has lovely lawns at its base and big trees surrounding it that sort of protect it from the hustle and bustle of London, and make its gardens feel sacred and hushed.  We walked round the front to get a full view of the west entrance.

It’s so grand!  The iconic steps from Mary Poppins were sprinkled with tourists snapping photos and locals eating lunch.  There wasn’t any bird feeding going on, but that tends to be mostly discouraged in London anyway.  The loudspeakers at the tube stations constantly announce, “PLEASE DO NOT FEED THE PIGEONS.  THEY ARE A NUISANCE AND A POSSIBLE HEALTH HAZARD.” 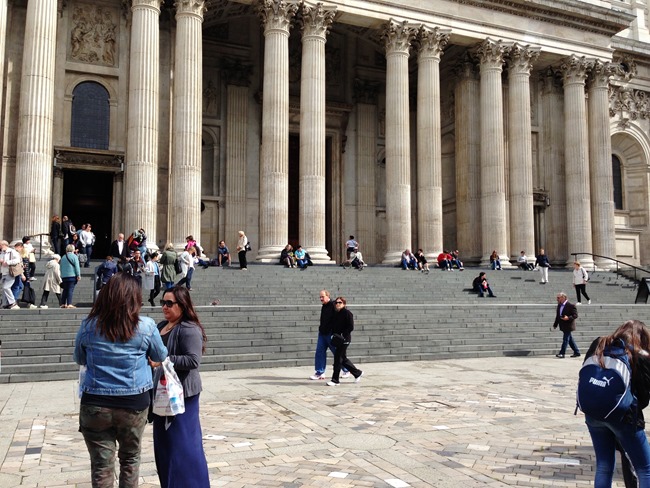 Thinking back, we really didn’t spend much time looking around, but it was really windy that day and I think we were pretty cold walking about outside (there was a service going on so we couldn’t pop inside).  We headed through to Paternoster Square right next door, which, despite holding a bunch of cafes, restaurants, and even a little grocery store, was marked at the entrance with a sign that said something like, “Paternoster Square is private land.  Entrance will be considered trespassing and will be severely prosecuted.  We’re going to cut off your hands.” 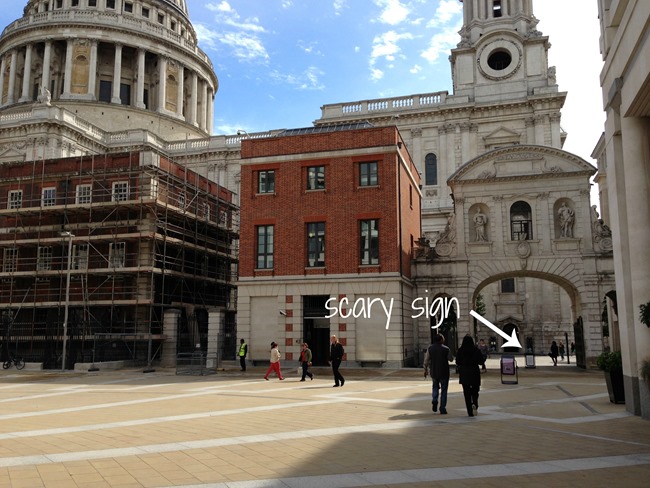 Not that last part, but it was implied.  We were feeling pretty peckish by that point (see what I did there?  British.) so we threw caution to the wind and trespassed away.  We got sandwiches and sat on the sunny steps in the middle of the square, watching a couple children who were actually feeding the birds here.  It seems that the sign was enough to deter most people, so the square was very quiet and peaceful… except for other hardened criminals like ourselves. 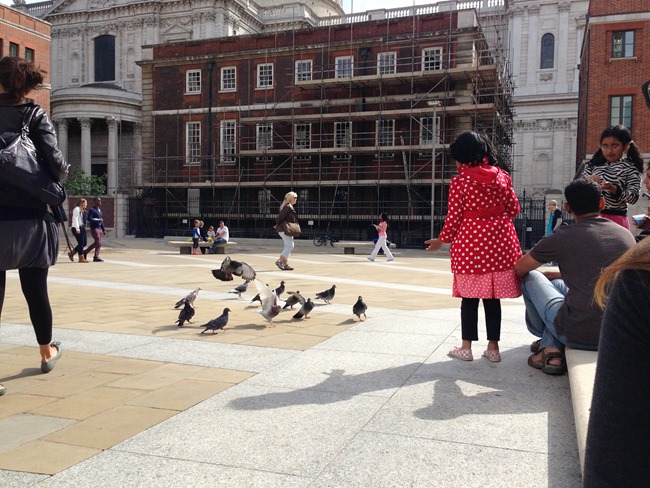 Happily fed, we continued on to the pedestrian-only Millennium Bridge, which is a great perspective for views of the London skyline.

That tall pointy building on the right is The Shard, the tallest building in London, and you can see Tower Bridge way down the river in the distance.  We’re hoping to go there soon!

We walked across the bridge as slowly as we could stand (it was REALLY windy and cold up there), and turned around at the other end for a farewell glance back at St. Paul’s. 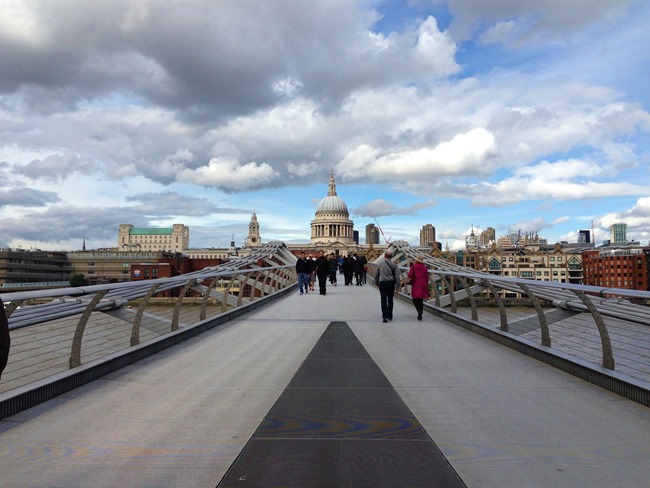 As you can see, our few days of uncharacteristic London sun have passed, and the clouds were rolling in quickly.  We decided to press our luck just a little bit longer, and continued our stroll past Shakespeare’s Globe Theatre.

This is the reconstruction, obviously, but ahhh – I just thought it was so cool!  How amazing would it be to see a performance there? 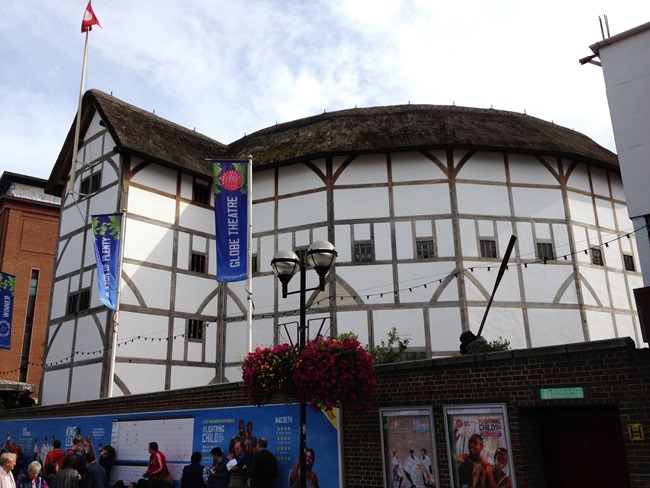 We followed the cobblestone street that ran parallel to the Thames, weaving under footbridges and around restaurant patios and even through tunnels.  One of these brought us to the Clink Prison Museum, which I think we’ll have to stop back to at some point.  Add it to the list… 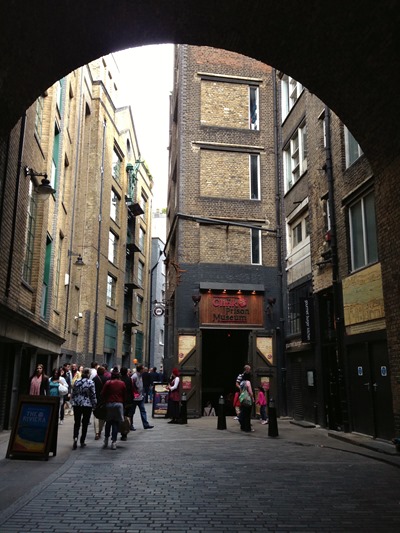 Speaking of that list, we passed a lot of really awesome old British-looking little pubs that I’m just dying to compare and contrast… 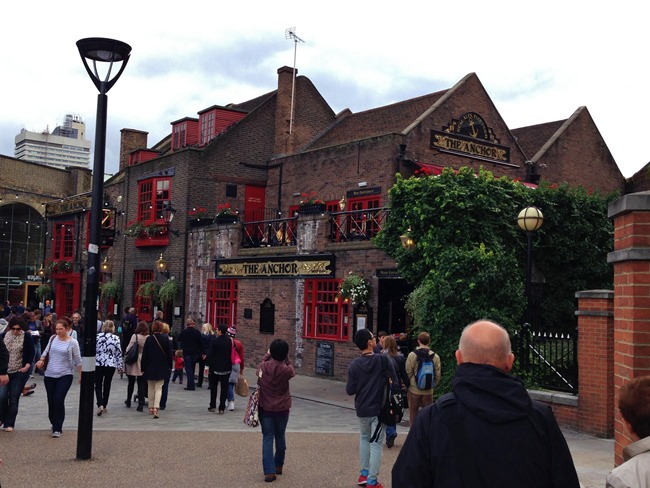 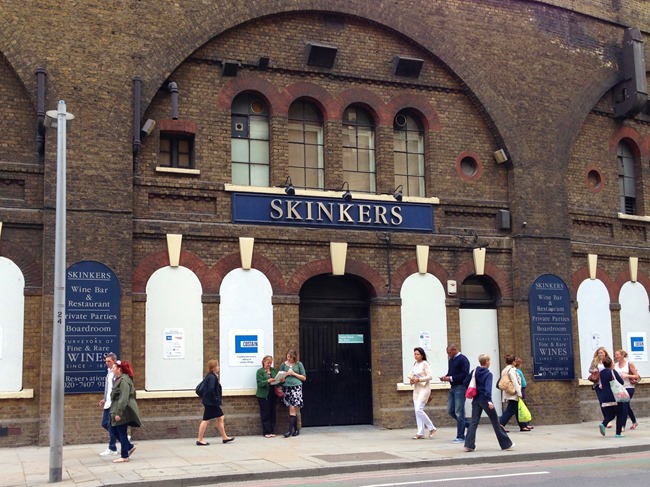 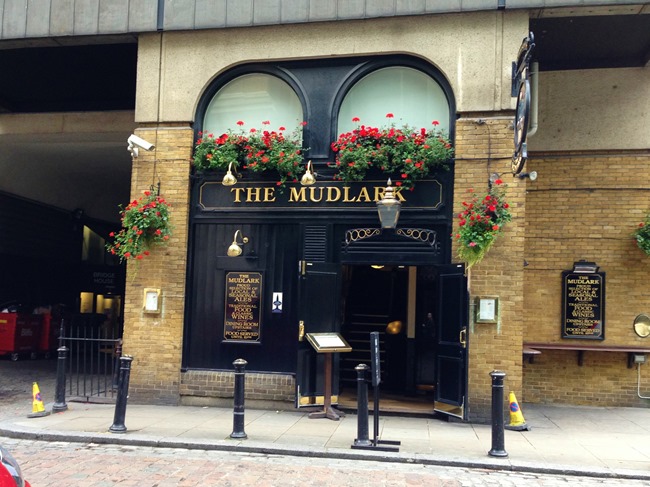 We also took a quick peek into Southwark Cathedral, which is embedded so fully into the old buildings and city streets that you don’t notice you’re in it until, well, you are.  Like St. Paul’s, their service was in session, so we took a look around the museum-like walkway instead.

My favorite part was the overlook onto a particularly crumbling area of ruins.  All the different parts of wall and foundation were labeled and dated, and you could see how the layers of brick and stone had been slapped on top of each other over the centuries like layers of wallpaper.

I know it’s difficult to read them in the photo, so from left to right the tags say: 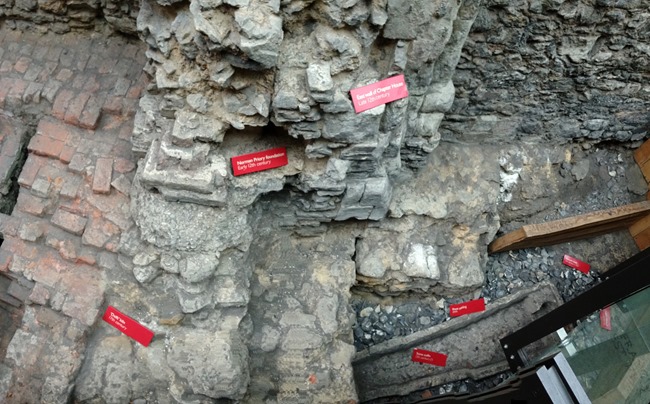 WHAT?!  First century AD road remains, just chilling next to some late 90s sheet piling?  Yup.  Also, kinda cool and creepy that the stone box in the lower right corner was a coffin.  I wouldn’t have realized that.

After leaving the cathedral, the road wandered back out to the riverbank and we got an almost-straight shot across to the Gherkin and the unfinished “Walkie Talkie” building.  You know, the one that’s been melting cars and bicycles (really, I think the Jaguar owner is being a bit overdramatic.  “I’m gutted” – honestly).  It’s actually gotten a second nickname, the “fryscraper,” which I think is very funny. 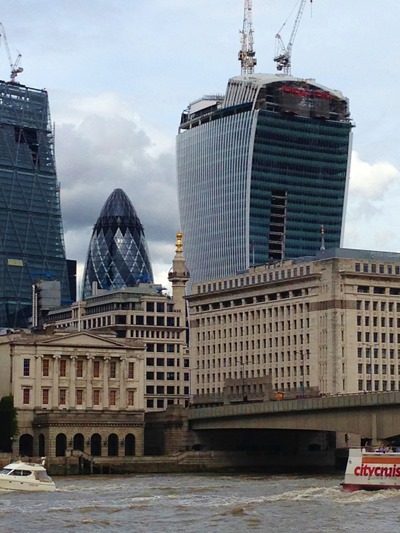 We were also right next to the HMS Belfast, a permanently-moored museum ship (okay, I had to look that up, I had no idea what it was) and even closer to Tower Bridge.  That’s the one that most tourists think is London Bridge of children’s nursery rhyme fame… but it’s NOT!  We passed the actual London Bridge that day, and it’s a very normal, kind of dirty, not very pretty bridge.  No flags or embellishments or anything.  Tower Bridge is much cooler. 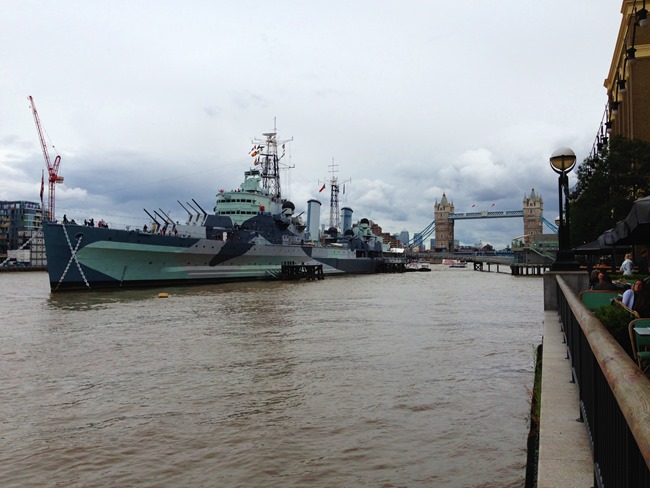 Right about when I took this picture is when we felt the first raindrops on our heads.  Amity and I figured we’d done our fair share of exploring for the day, and hightailed it back to the London Bridge tube station for the quick journey home.  Oh wait, it wasn’t quick.  The overground station we had to go to was closed for maintenance.  And then we couldn’t figure out the buses.  And then we got into Zone 3 when my ticket was only for Zones 1 & 2 (luckily we also encountered a very apathetic station manager).  And then it was pouring.

But at long last, we finally made it home and put the kettle on.  What more could we ask for at the end of the day?

4 thoughts on “Feed the Birds”