One thing I really miss about the Outer Banks is cruising (island lingo for riding bikes around for fun).  On sunny days, Sarah and I would load up our towels and sunscreen, sling beach chairs over our backs, and pedal down the beach road to stake out a spot in the sand.  On balmy evenings, we’d leash up Irie and cruise around our neighborhood and down Bay Drive to watch the sun set over the sound.

London might not be quite as cruise-friendly as the beach (you know, with traffic and stoplights and whatnot), but there are still plenty of options if you fancy a bike ride.  I met Amity in Kensington one afternoon and we rented Barclay Bikes to ride around the gardens.  There are dozens of docking stations dotted all over London where you can rent these bikes – £2 for the whole day! 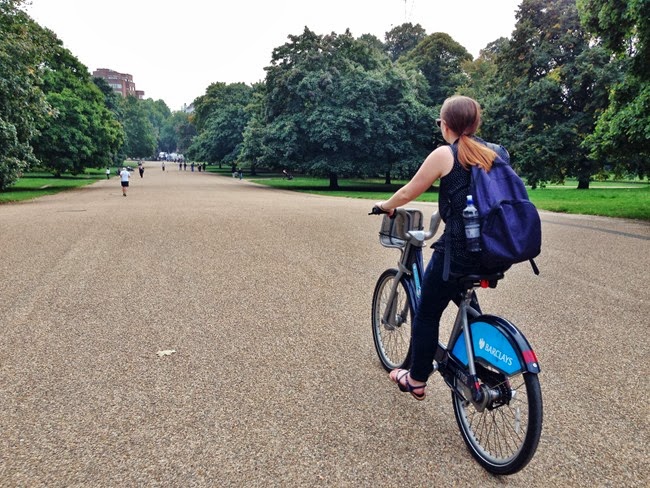 Unfortunately, a lot of the little pathways are actually closed to cyclists – we’ll have to look into more options another time – so it only took us about 45 minutes before we’d ridden everywhere we could ride twice.

Amity had the brilliant idea to put our new palace membership to good use and check out the interior of Kensington Palace while we were right there.  Parts of the palace are still used as private residences for the royals and their guests, but plenty of chambers are now open to the public.  If any lowly serfs like ourselves get confused as to where they’re allowed, the doors are happy to lend a helpful hand and point you in the right direction. 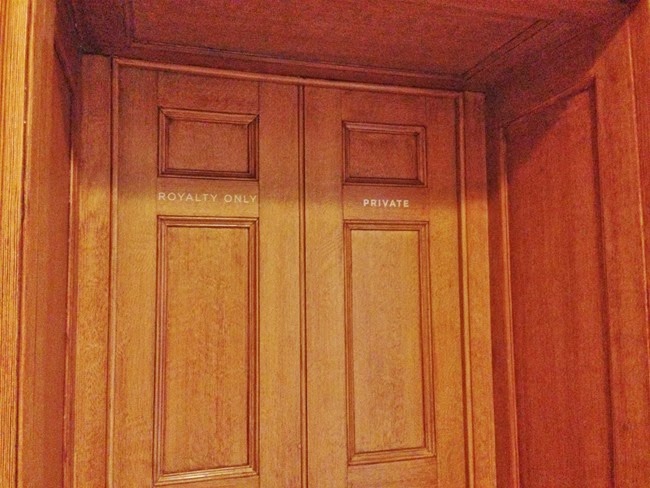 Ah, nope.  Can’t go in there.  These doors were at one end of a corridor that was empty except for a long bench with a bunch of throw pillows each embroidered with the face of a royal family member.  I would imagine that it is probably the highest aspiration of some to end up in that hallway.  Power over whole countries, cool.  Palace digs, not bad.  Face on a pillow?!?!  I’ve finally made it!

Although reigning monarchs now use Buckingham Palace as their main residence, kings and queens of England lived in and conducted business from Kensington Palace until the mid-1700s.  These chambers were where the king held meetings and social functions, among other things. 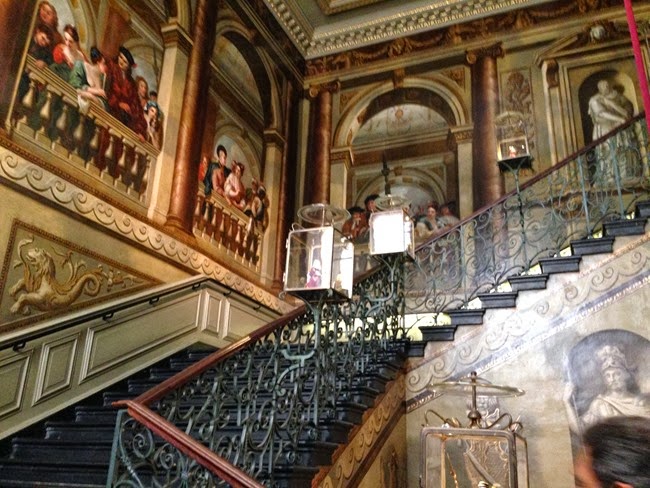 In an attempt to make history more accessible to the younger generations (I think), we were invited to guide ourselves through the King’s Apartments using a fun interactive guide that was essentially a British version of Goosebumps: Reader Beware, You Choose the Scare!  Ohh, the memories. You played the part of a low-level courtier who was seeking an audience with the king, and got into all sorts of shenanigans along the way, including but not limited to: an angry gentleman named George Bubb Dodington, a dark lady with a fan, and the requirement that you communicate a secret code to the royal librarian by yelling, “His Majesty has an extreme fondness for A LEG OF COLD CHICKEN!”  You were actually supposed to go up to this librarian guy in period dress and shout that at him.

Past the librarian was the throne room, officially called the Presence Chamber, which way back in the day was where the king would sit and grant audiences with courtiers who wished to discuss issues or problems with him.  This chair belonged to King George II’s son, Frederick. 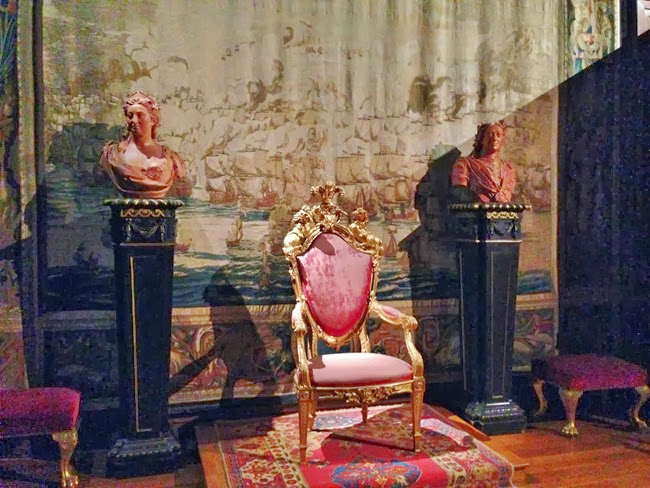 The King’s Gallery is a long chamber with beautiful oil paintings in gilded frames lining the walls.  According to the HRP, this room looks pretty much just like it did for King George I in 1727.

However, they’ve added hidden speakers in the curtains which are activated when you sit down on the window seats and start whispering – it’s supposed to give the impression of cunning and ambitious members of court who would scheme and plot their personal rises to power while gathering in this room. 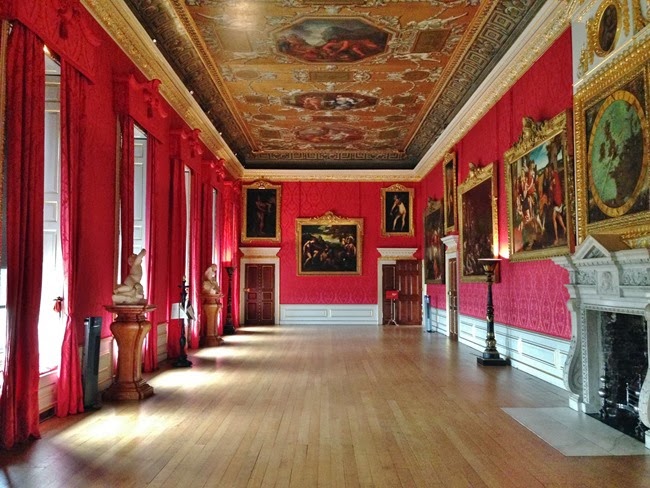 I loved the clock over the fireplace set onto a beautiful giant map of Great Britain and western Europe, with London right at its center.  This clock was created for King William III and still works! 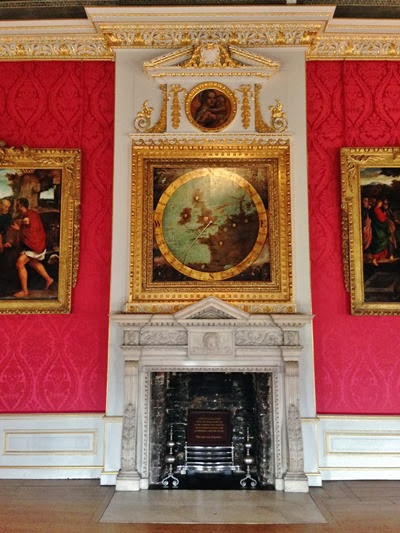 We moved on to an exhibit called Victoria Revealed, which was, as you may have gleaned from the title, about Queen Victoria’s life in Kensington Palace.  As the beginning of the exhibit explained, most people think of Queen Victoria as she was during her mourning period: a little old lady dressed in black.  However, she had a long and eventful life in the palace before her husband, Prince Albert, passed away. 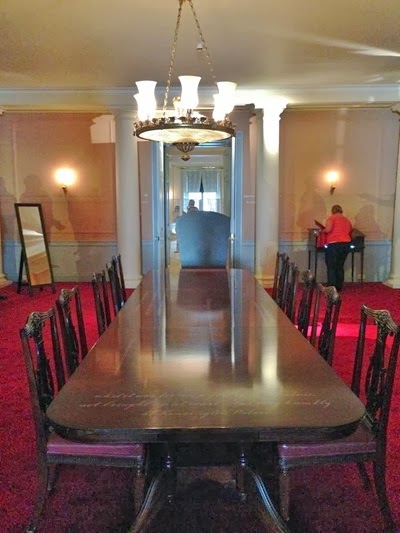 This is the stateroom and table where she was given the news in 1837, when she was 18 years old, that her uncle had died and that she was now queen.  The table was embellished with quotes from both Queen Victoria and members of court about her appointment.  I thought it was really funny and kind of sweet that she wrote something in her journal along the lines of, “I felt a great calm and not the slightest nervousness,” and one of her courtiers said something like, “Yeah… she looked super nervous.”

Beyond that, there was a whole room called Victoria & Albert, which chronicled their meeting and courtship and even contained Queen Victoria’s wedding dress.  This metal grate artwork split the room and consists of words taken entirely from Victoria & Albert’s personal diaries and letters to each other. 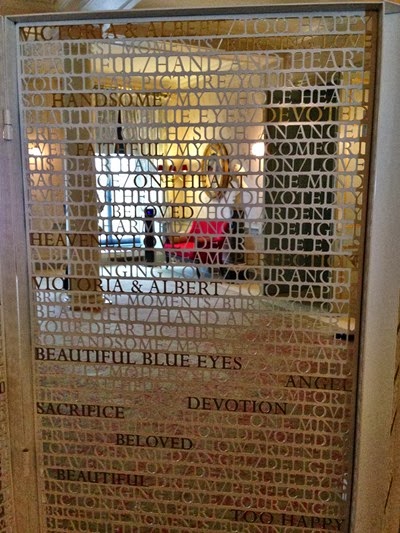 My favorite room was this one, with the gigantic dark wood desk where Queen Victoria carried out much of her official business as monarch.  It was clear that she really did shoulder her own responsibility in regards to her position and did an incredible amount of political and governmental work. 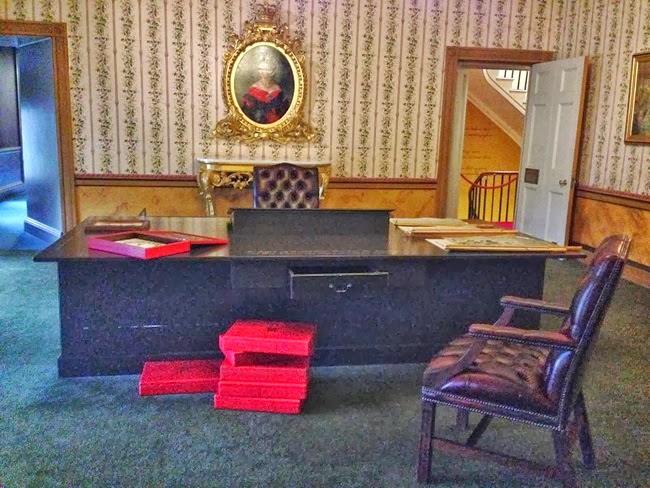 Letters written by Queen Victoria herself are preserved under the glass top of the desk – so cool! 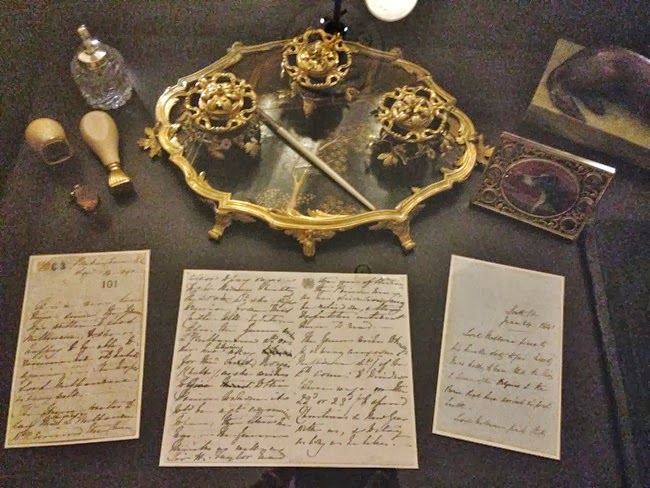 Further rooms were dedicated to Queen Victoria and Prince Albert’s nine children and their childhoods in the palace, as well as to The Great Exhibition of 1851, Prince Albert’s greatest accomplishment.

The exhibit then shifted to cover Prince Albert’s death in 1861, and I found the presentation incredibly moving.  Leaving the previous room, we walked into a chamber draped in black velvet, empty and dark except for a blank fireplace with a mirror above it.  The only light in the room illuminated the words that were etched across the mirror, taken directly from Queen Victoria’s journal. 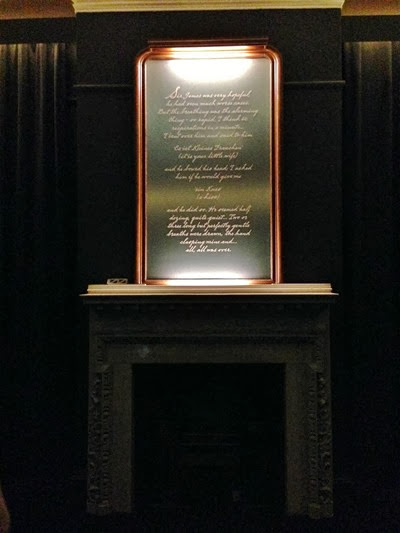 “Sir James was very hopeful; he had seen much worse cases.  But the breathing was the alarming thing – so rapid, I think 60 respirations in a minute… I bent over him and said to him ‘Es ist Kleines Frauchen’ (it is your little wife) and he bowed his head, I asked him if he would give me ‘ein Kuss’ (a kiss) and he did so.  He seemed half dozing, quite quiet… Two or three long but perfectly gentle breaths were drawn, the hand clasping mine and… all, all was over.”

I almost want to cry just reading that again!  Victoria’s writing, even just for her own personal use, was so powerful and expressive, and the ambiance of the room made it feel even more somber.  Continuing through, some of the queen’s mourning outfits were on display, as was this period of her life that she is often most remembered for. 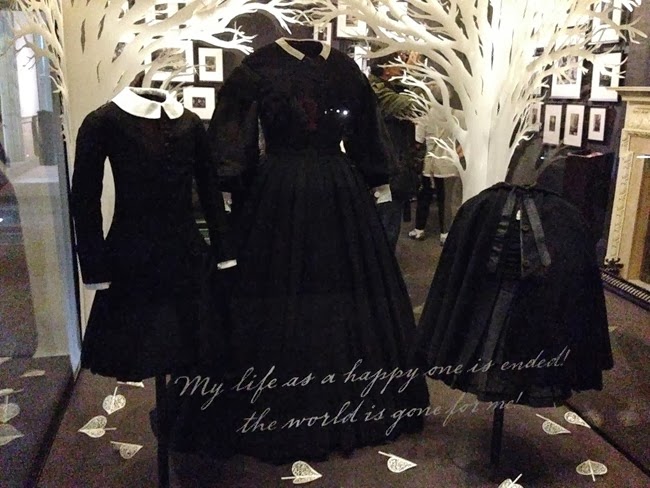 Again, from her journal: “My life as a happy one is ended!  The world is gone for me!”

I think that royal marriages, especially historic ones, are often regarded as cold and unemotional (and sometimes with good reason, as they used frequently to be made mainly as business decisions).  But it could not have been clearer how truly in love Queen Victoria and Prince Albert were for the entirety of their marriage.  It was really beautiful to imagine. 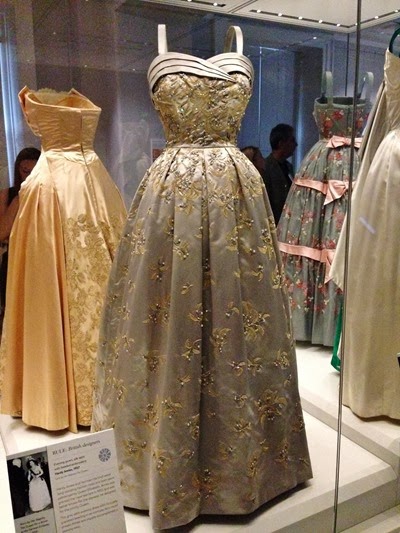 Also, although I think she was pretty stylish in her personal life, most of Diana’s officially commissioned dresses from the 80s were pretty dreadful.  Sequins and crushed velvet and shoulder pads galore.  I guess even princesses aren’t immune to fashion faux pas.

This was our final visit of the afternoon.  The Queen’s Apartments are the slightly smaller counterpart to the king’s chambers.  Apparently, they’ve very recently redone the exhibit in this part of the palace, and I will be the first to admit that I just didn’t get it.  So I basically took pictures of things that looked pretty.  Here, some birds! 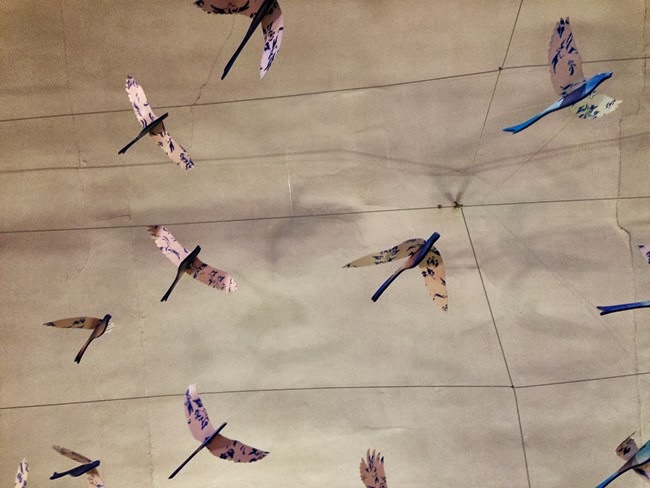 These rooms weren’t set up like they would have been while in use by the monarchy, as the King’s Apartments had been.  Honestly, it sort of seemed like somebody went antiquing and staged the rooms for a bizarre magazine cover shoot.  Here, a birdcage (are you sensing a theme?)! 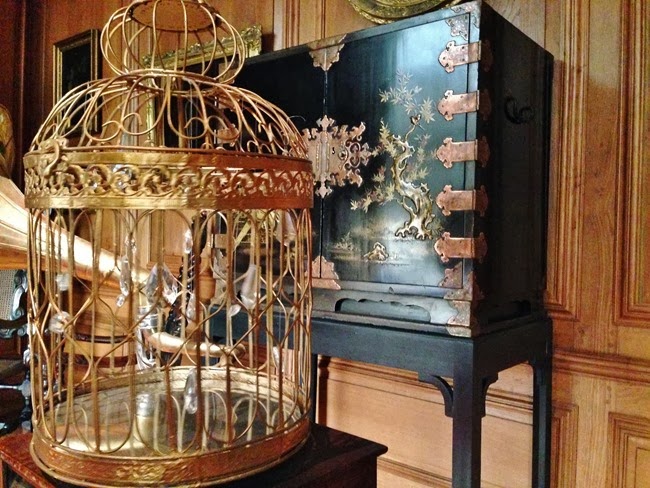 There were signs along the way with information about various children and members of the royal family, but I was hard-pressed to figure out how they related.  One room seemed to be mostly about a little prince and how he became very ill… and the decorations were supposed to represent a dreamscape he might have had in a fever-induced hallucination.  It sounds cool (or maybe not)… but IT JUST WAS SO WEIRD.

Here, some little houses!  This reminds me of a Tim Burton film.  I like that, actually. 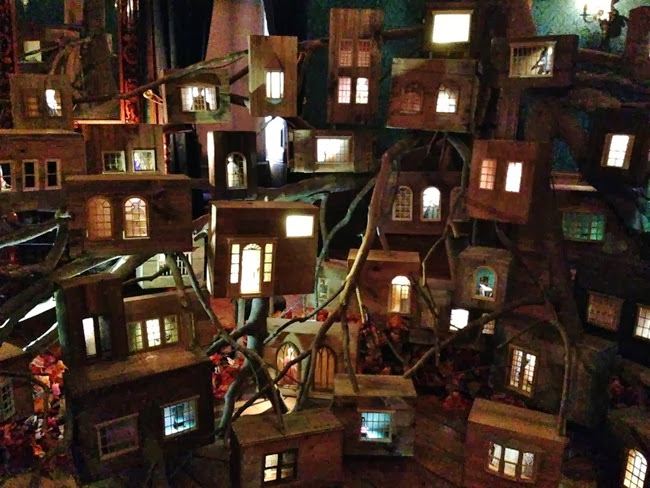 Maybe I was just tired.  Or maybe these exhibits were actually bonkers and made no sense to the rational human.  I think that’s it.  I really loved the Victoria Revealed exhibit, and the Fashion Rules one was extremely cool as well… but I just couldn’t really get down with the King’s and Queen’s Apartments.  I mean, I could’ve stared at that sweet as map clock all day if it weren’t for the super creepy whispering curtains behind me.  Just weird, people. 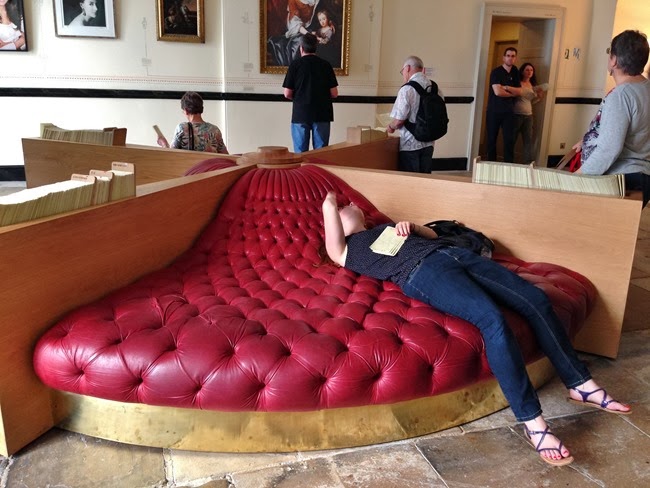 This was in the entryway.  Amity and I could hardly peel ourselves off of it.  If anyone knows where we could obtain one of these majestic tufted beauties, please inform us immediately.

On a totally unrelated note, did anyone watch Parks & Rec this week??  Can we take a hot second to talk about Craig and how he’s the best thing that’s happened to Pawnee since Treat Yo Self 2011?! Oh, Craig.  I hope he sticks around.

4 thoughts on “Inside Kensington Palace”