“The happiest lot on earth is to be born a Scotsman.  You must pay for it in many ways, as for all other advantages on earth… But somehow life is warmer and closer; the hearth burns more redly; the lights of home shine softer on the rainy street; the very names, endeared in verse and music, cling nearer round our hearts.”

Our last full day in Scotland was upon us – alas!  It was also the first day that we really got the weather we’d been expecting all week.  It was FREEZING. 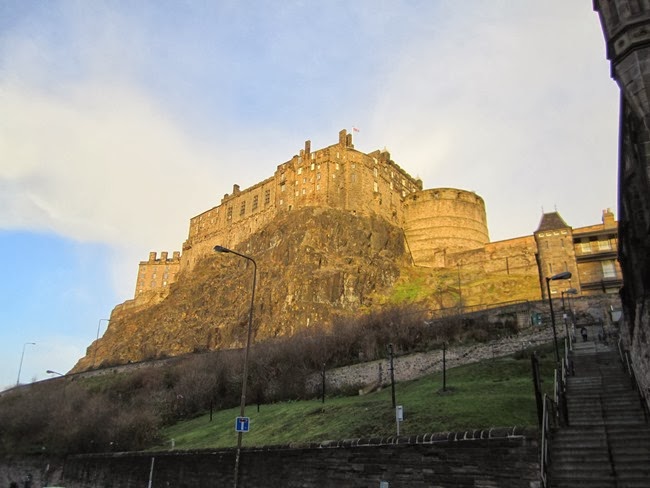 We walked up the hill to Edinburgh Castle and went in just after it opened at 9:30 (or “half nine” as they say here). 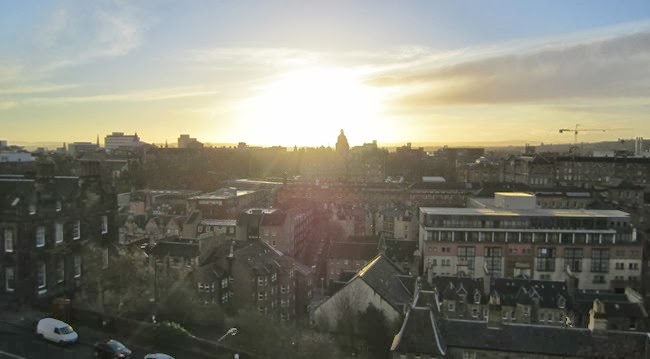 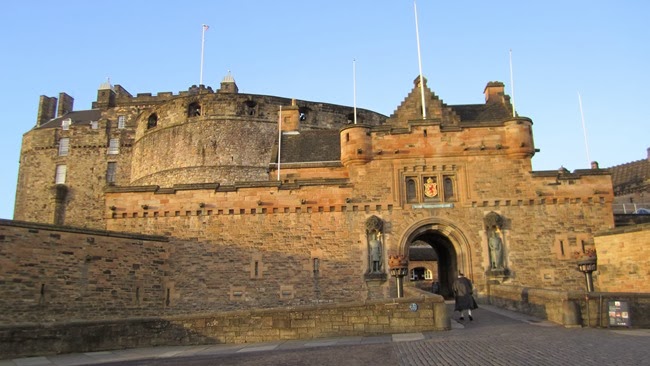 We hopped on a brief tour with a hilarious Dutch guide named Ernest.  He was extremely jovial and had some excellently rehearsed jokes. 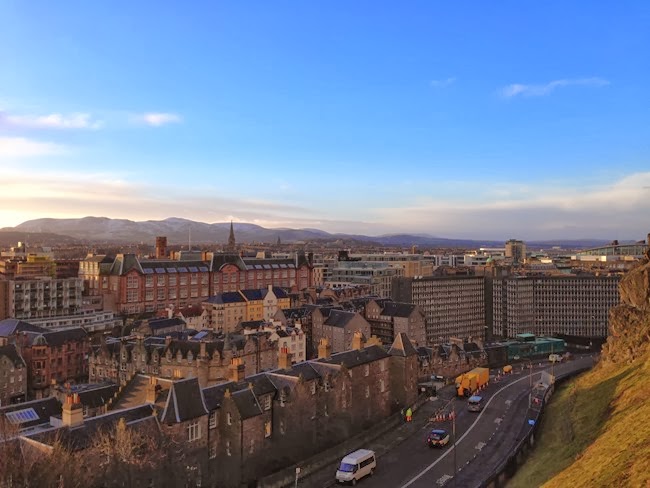 At one point, he joked that the castle’s chapel can still be booked for wedding and is very popular with fathers of the bride because it only seats 25 people… there was a really delayed reaction while Ernest waited expectantly, before one guy on the tour started laughing really hard, and Ernest said, “Oh, thanks!  You are very polite.” 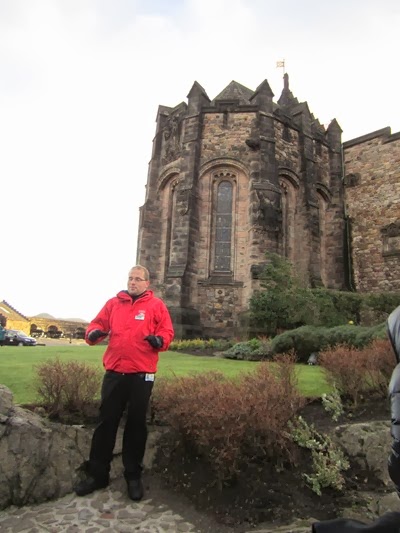 We learned a lot about the really interesting history of the castle on our tour.  Like many other parts of Scotland’s identity and culture, it’s been rather badly bullied by the English over the centuries.  One thing I realized on this trip is that the United Kingdom is not quite as united as one might think – I’ll actually be really interested to see the result of the Scottish vote of independence next year. 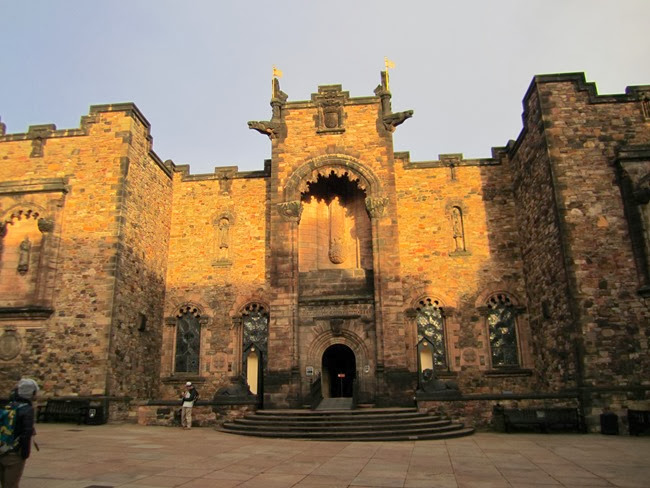 Anyway, it was so dang cold out that we hightailed it in to the Scottish Crown Jewels exhibit the second Ernest was done talking.  I thought the way that the castle rooms and exhibits were laid out was really cool (bitte nicht fotografieren, sorry!).  After, we visited the chamber where Mary Queen of Scots gave birth to James VI of Scotland (aka James I of England – confusing!), the Great Hall, and the Scottish National War Memorial. 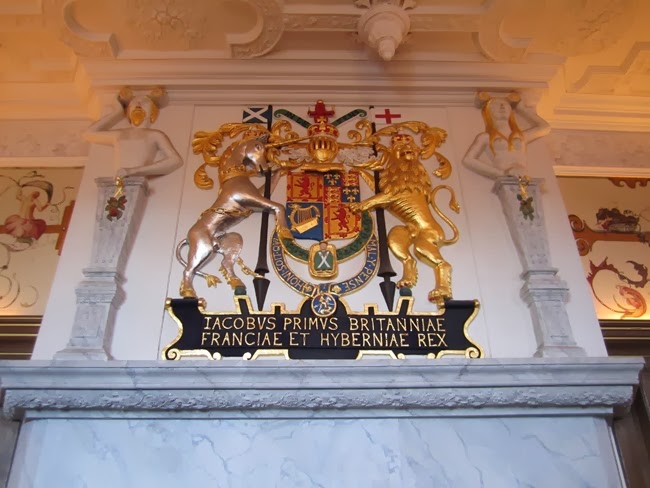 The memorial was really moving (that’s not what’s pictured above – they didn’t allow photos).  It was in a big stone cathedral-like space, with a pillar in the center marking the highest point of the rock on which the castle is built.  The chamber was lined with thick leger books filled with the names of every Scot who has lost their life in a conflict, and they’re still being added to today.  It was so simple, but one of the most thorough and genuine memorials I’ve ever seen.  It was a very beautiful and somber place.

It was still pretty cold in the stone buildings, so we went for cream tea (tea and scones) in the café to really warm up.  Thus began… The Chair Saga.  See Amity’s blog for a full account.

We wanted to stay in the café all day (as the beautiful Scottish lad who rung us out had suggested… swoon), but they were clearly setting up for a special Christmas luncheon and we started to feel badly about taking up a table when it was getting so busy. 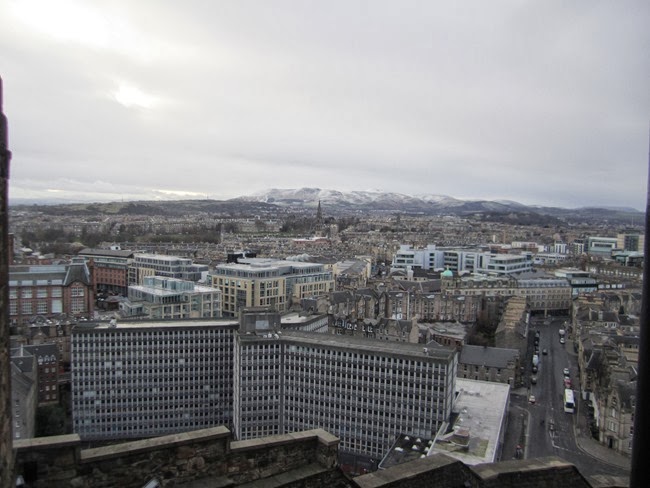 We pulled our hoods closed as tightly as possible and did another really quick circuit to take in the views from over the castle walls before heading back towards town. 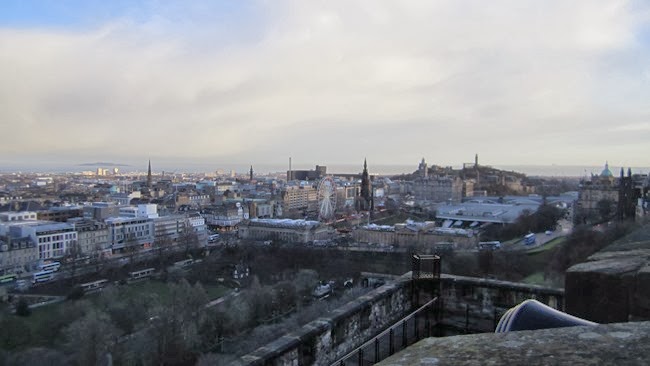 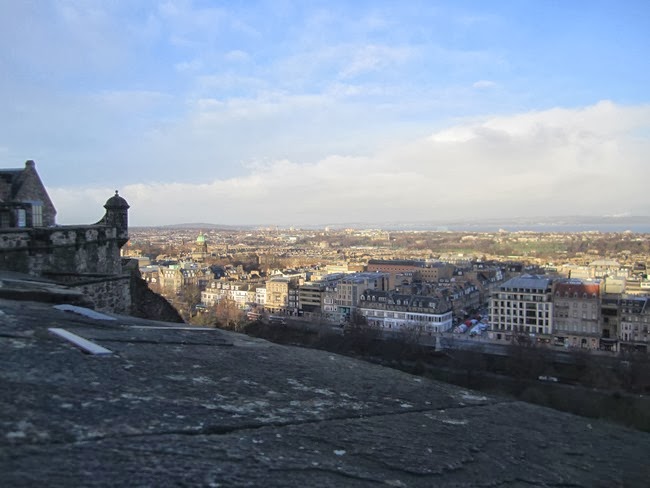 We stopped in to a little and unassuming-looking gift shop, which turned out to be housing a huge three-story underground weaving shop in its depths!  There were people and machines weaving kilts and tartan fabric at furious speeds, and a whole exhibit of the evolution of Scottish traditional dress. 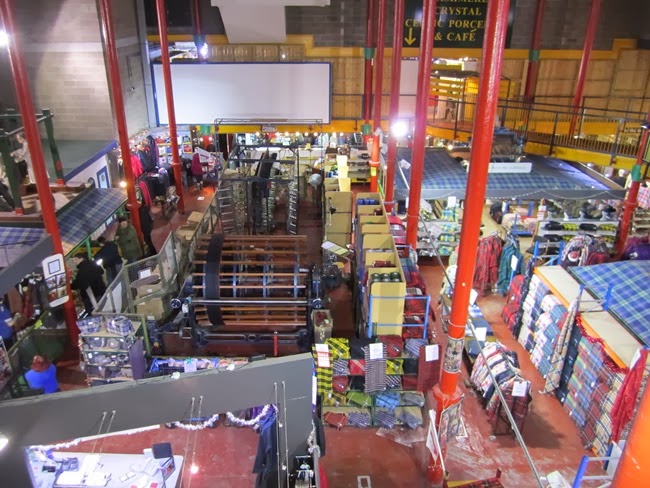 We stopped in a few other shops and finally decided to visit The Writers’ Museum, which Billy had pointed out to us on our first day in Edinburgh and we’d been dwelling on ever since.  The museum is in a beautiful old Victorian house and is dedicated to the lives and work of Robert Louis Stevenson, Sir Walter Scott, and Robert Burns.  I never knew much specific information about any of them, so I really enjoyed getting to learn more while I was in their home country.  I especially loved the connecting theme of how important their Scottish identity was to each of them.  Robert Louis Stevenson had some amazing quotes about Scotland and about travel in general, which I jotted down and have been using for inspiration at the beginning of these recap posts.  I really want to read some of their books now! 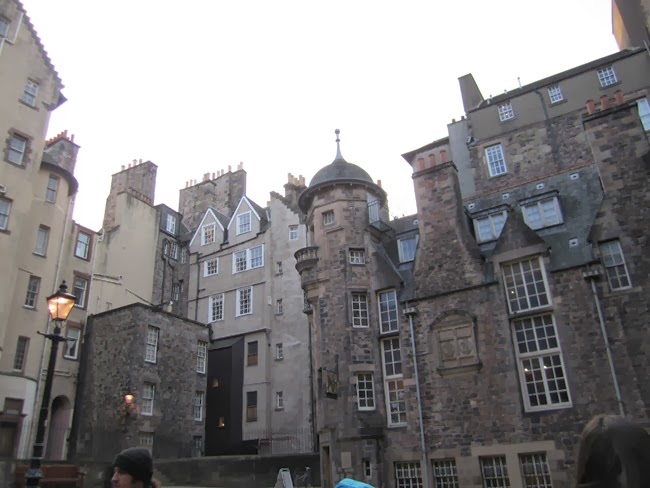 After we left the museum, we walked up and down the Royal Mile a bit more, but it was just too cold to stay outside for long.  We went back to the Starbucks on High Street and camped out upstairs with hot drinks.  It was a really cool place, with old mismatched chairs and tables, and built-in bookshelves lining the walls that were filled with old dusty books. 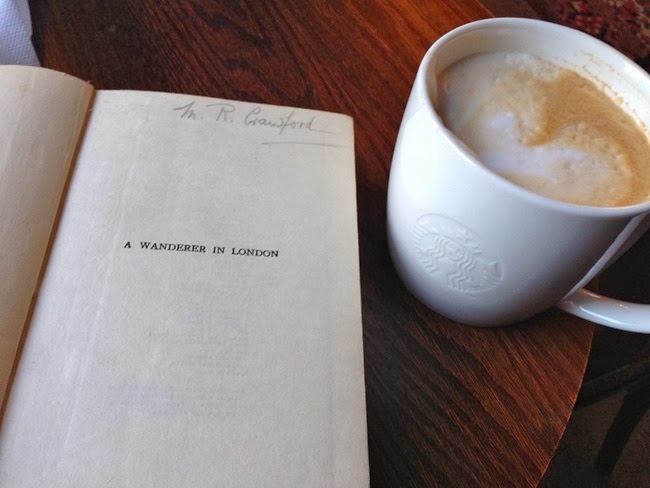 I randomly picked out A Wanderer in London by E.V. Lucas – what a find!  I’d never heard of it, but his writing reminded me a bit of a less-ridiculous Bertie Wooster.  I kept using my phone to snap photos of the pages because there were so many great quotes.  I loved that it made me feel so fond of my new hometown, because love for Scotland had been creeping up on me throughout our visit and I was feeling a little melancholy about returning to London.  It was nice to rekindle the spark. 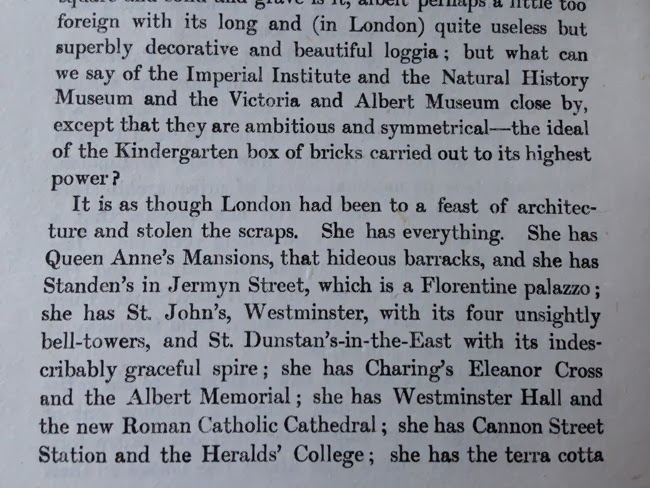 Amity and I sat and read for a couple of hours before we started feeling peckish, so we picked out The Mitre Pub and went in for a somewhat early dinner.  I had a delicious burger and an even more delicious pint of Guinness.  Irish stout in Scotland!  Blasphemous!  But wait, here’s the thing.  I really like good beer.  I mean, my blog acronym is ALE (okay, that was not intentional, but it is a happy coincidence).  And I was TOLD that Britain is the place to be for good beer.  NOT SO, MY FRIENDS.  Britain is the place to be for warm yellow beer.  So after being told at multiple places that they didn’t have anything dark except for Guinness, I bit the bullet. 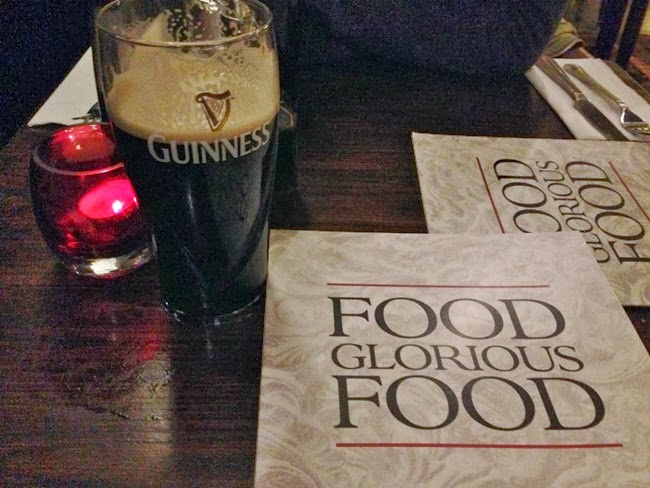 We enjoyed our last leisurely walk through Edinburgh and our last evening at the StarVilla – I really grew to love this city!

The next morning, we woke up with plenty of time to catch the cab that Doreen had arranged for us, so we sat on our beds and had a leisurely cup of tea before heading out.  Our driver was a really nice old man who chatted to us about the underground passages in Edinburgh where they used to throw people with the plague.  So that was swell.

We got to Waverley Station a bit early for our 8:30am train, so we sat and entertained ourselves by observing the antics of a particularly perseverant pigeon who was determined to get some guy’s food in Burger King.  It didn’t cross my mind at the time, but now I’m wondering what kind of person eats Burger King at eight o’clock in the morning.  That guy, I guess.

We boarded the train, got underway, and I watched the sun rise as we sped through the Scottish countryside and back towards England.

So ends the account of our week in Scotland.  But wait, there’s more!  Don’t get excited.  There’s just one last little bit of Scotland fun that will be popping up here in a couple days before we bid adieu to the land of kilts and haggis.  See ya soon!

3 thoughts on “Edinburgh Castle, and a Wander”