After their first day and a half in London, my parents & brother were fully adjusted to GMT and ready to see more of the city.

We took the tube to St. Paul’s to have a look at the beautiful cathedral, which was very special for my mom in particular as her grandfather (my great-grandfather) used to ride his bike there and eat lunch on the steps during his early life in London.

We even took a quick peek inside, although it was Sunday so no photographs were allowed.  The interior is absolutely breathtaking and well worth a visit.  I’d love to go back and climb the tower sometime!

From there, we walked across Millennium Bridge, which was packed with moseying tourists and bustling locals going about their business. 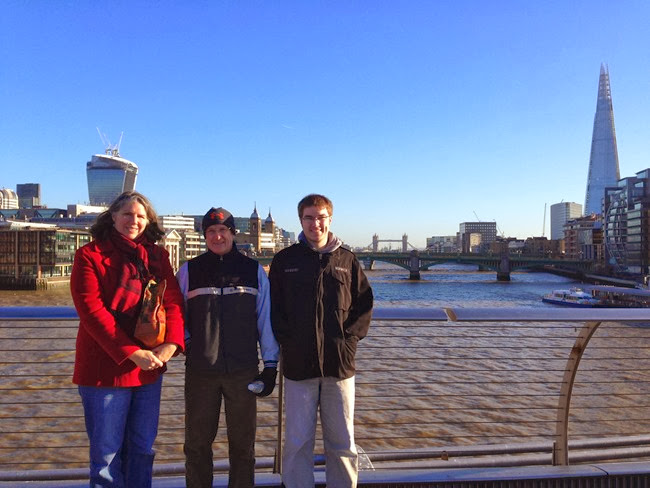 We ended up doing almost the same exact walk through Southwark that Amity and I did during our first week in London (Mom & Dad, you should go back and read that post again, and see how much more you recognize now!).  We passed the Globe theatre and The Anchor pub, which I knew my parents would love, as well as The Clink Prison Museum (still have to get back there) and some cool street art. 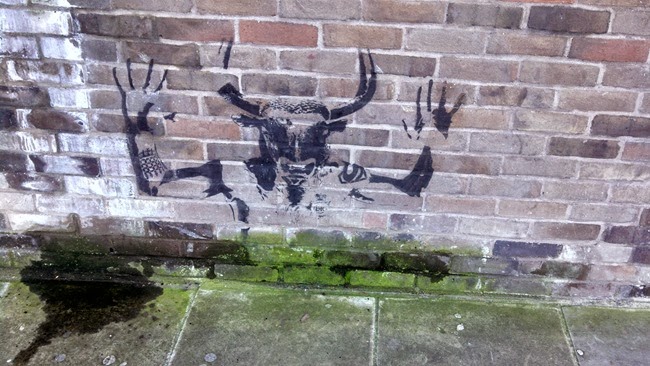 My brother took this great photo of the London skyline from the Golden Hinde II, an old-fashioned ship that’s permanently moored and now serves as a museum and tourist attraction. 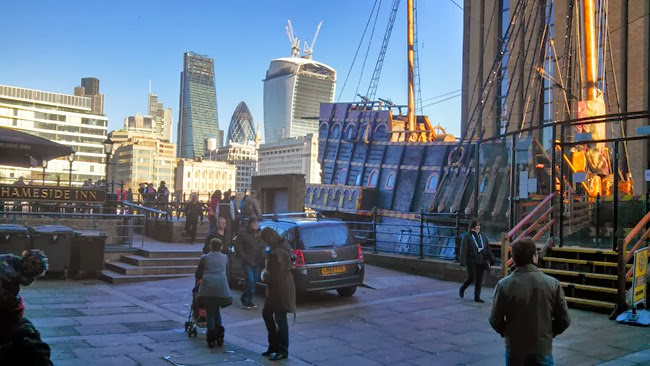 We walked even farther that day, since we weren’t rained out as Amity and I had been, and emerged onto the big open plaza outside City Hall, which is a crazy looking building.  It’s right next to a sunken amphitheatre called The Scoop, so we decided to nickname City Hall “The Plop” since it looks like… well, someone scooped out part of the ground and plopped it down. I looked it up, and apparently we’re far from the only ones to have given this building a nickname based on it’s, er, unique appearance.  Although I don’t think that anyone else has come up with The Plop, our own sassy mayor, Boris Johnson, has dubbed it The Glass Gonad.  Classic BJ. 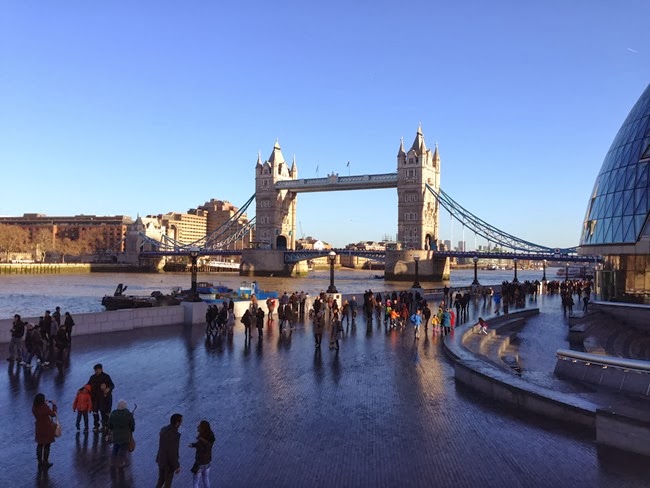 Aaanyway, if you look past The Plop, this spot gives you a fantastic view of my beloved Tower Bridge.  It was a perfect backdrop for the only full family photo we took the entire trip (oops). 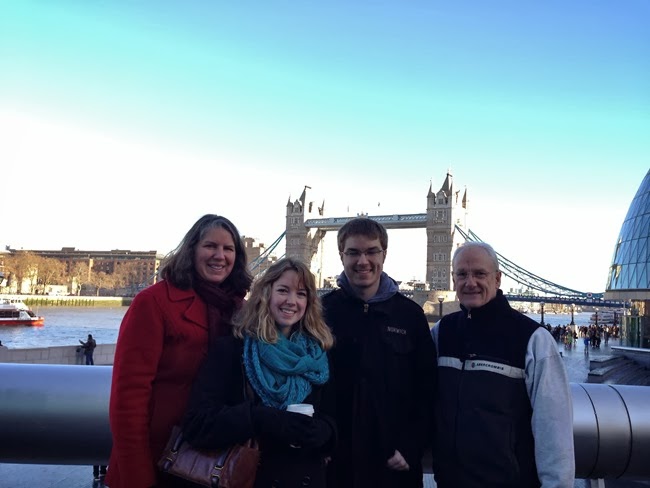 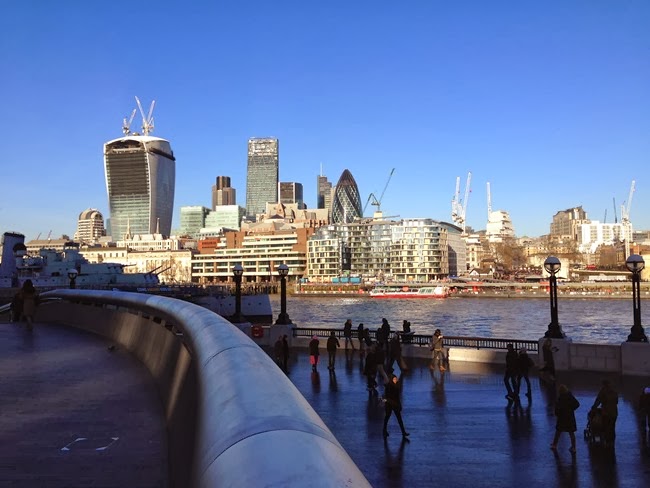 Since Tower Bridge is basically the light to my bug (#TheBachelorWedding), its magnetic pull caught hold of me and before we knew it we were standing nearly underneath it.  I love seeing it against a clear sky like this, since it makes the bright blue accents on the bridge look much less random and almost as though they match their surroundings! 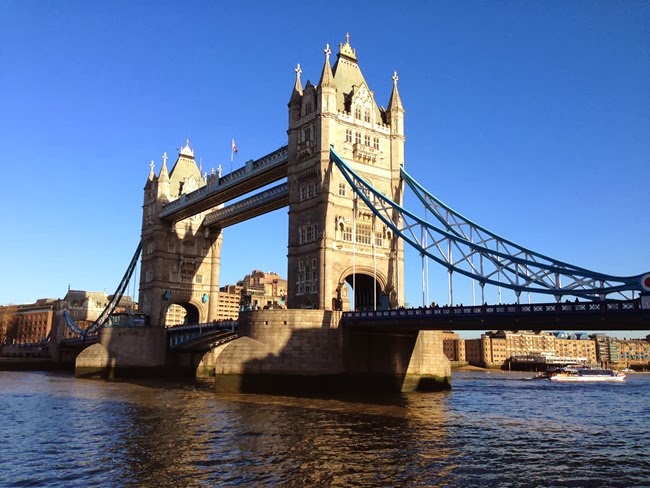 I’ve been fawning over Tower Bridge since day one, but it took four months to actually climb it.  The high blue walkways that connect the two bridge towers are lined with photos of some of the other spectacular and famous bridges in the world, and the windows offer a great view over the Thames. 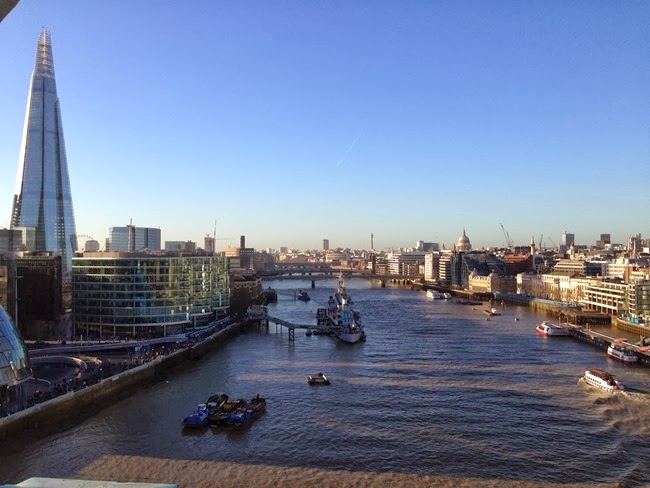 If you catch it from the right angle, the water actually looks blue instead of brown!  A miracle!

So after all this time pining for Tower Bridge, how did it live up?  Well, as David Hockney said, “Always live in the ugliest house on the street – then you don’t have to look at it.”  Tower Bridge proves this in reverse.  I think it’s one of the loveliest things in London, and it turns out you can’t see it very well when you’re inside.  I’m quite glad to have visited, but I’d much rather look at it.

We left Tower Bridge, skirted the Tower of London, and took the tube to Baker Street station to meet Amity for our next excursion.  I really liked this station.  It was very London-y. 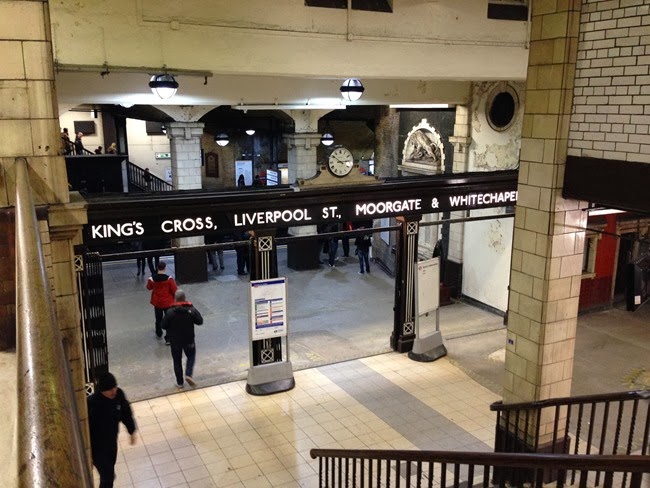 We had a quick pub dinner, Paul and I popped into the London Beatles Store, and then the five of us were ready to explore The Sherlock Holmes Museum! I have been itching to get to 221B Baker Street ever since moving to London.  I’m a huge fan of the original Sherlock Holmes stories and have been borderline-obsessive about the three current interpretations since their inceptions. 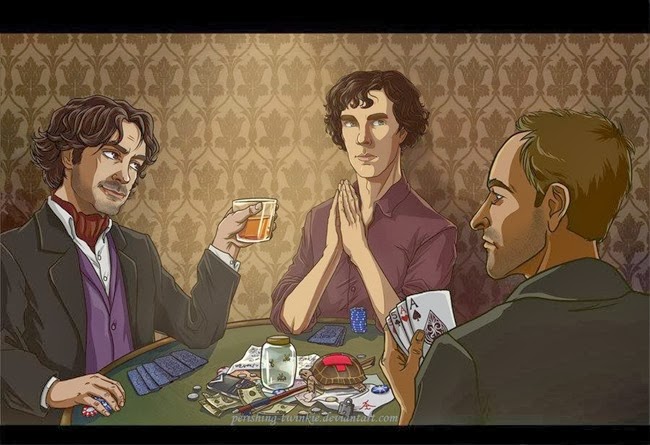 Who says you can have too much of a good thing?  Not me.

Not to snub the great Sherlocks of history past, either.  Honorable mention OBVIOUSLY to Michael Caine in Without a Clue, Basil Rathbone, Mitchell & Webb, and naturally The Great Mouse Detective.  (Also, can we discuss how “Basil Rathbone” and “Benedict Cumberbatch” are actually even more perfect detective names than “Sherlock Holmes”?  Another time?  Okay.) 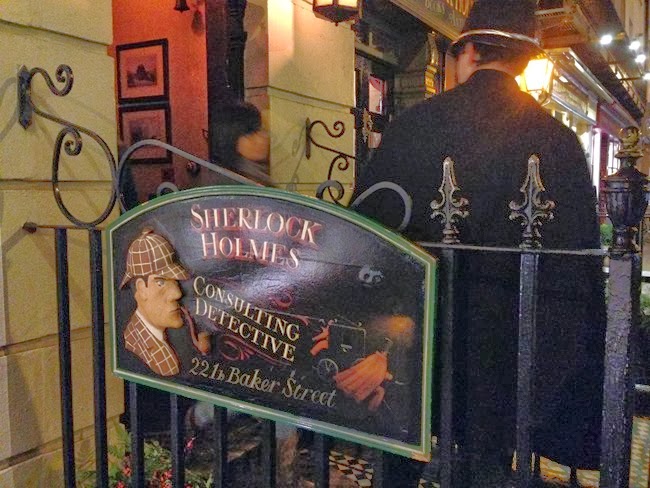 So, obviously Sherlock Holmes is a fictional character (my head’s not entirely in the clouds, people), but this museum is at the actual address that Sir Arthur Conan Doyle chose for Holmes & Watson’s flat.  Fun fact: BBC’s Sherlock doesn’t film Baker Street scenes here, but actually uses North Gower Street in central London, where Charles Darwin once lived!

The old townhouse is sort of an odd mix of period- and story-accurate décor, as though the crime-solving duo actually lived there, and Sherlock Holmes memorabilia.  For example, Sherlock’s desk is filled with old books, exotic artifacts, and bits & pieces of science experiments waiting to happen… 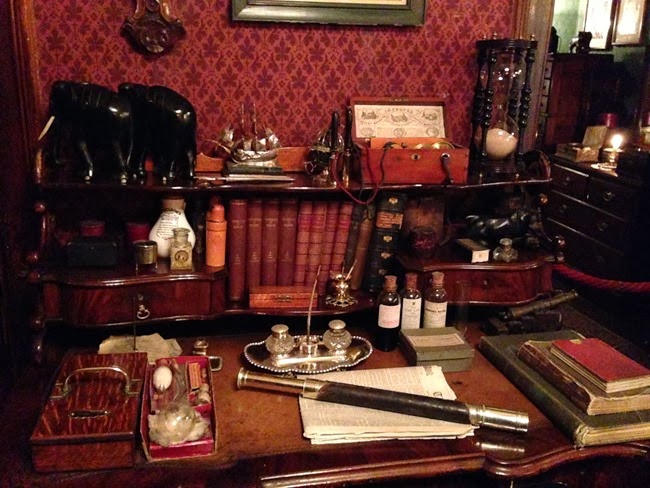 …but I don’t think the world’s only consulting detective would fill his rooms with statues and framed photos of himself.  Actually, on second thought, he does have a bit of an ego thing going on… 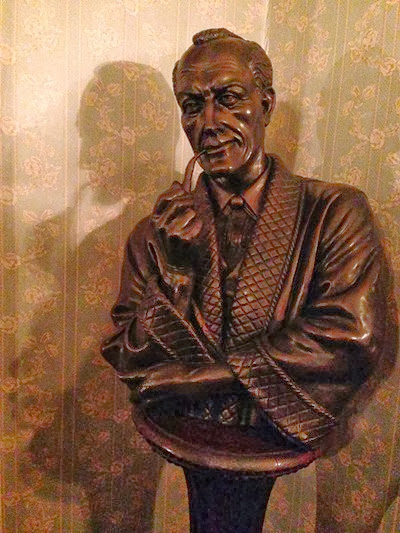 They also had a little sitting room with classic Sherlock props.  Paul and I were alllll about that.  I know, I know, communal hats, gross.  Too bad I can’t resist a good deerstalker. 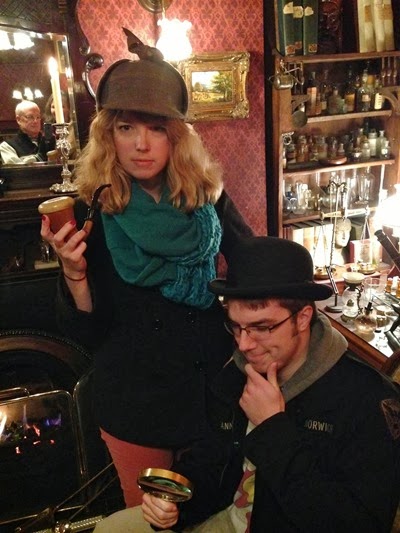 Overall, as a big time SH fan, I’d say that Baker Street was absolutely worth a visit, but probably not a return.  In the end, it was a pretty cramped and crowded townhouse that you had to remember was never actually inhabited by Sherlock Holmes, as he does not exist (despite what all the people hashtagging “Sherlock Lives” on sticky notes in his bedroom clearly believe).  Still, it was cool even to stand on the sidewalk at the actual 221B Baker Street!

And I mean, as far as fictional detectives go, he does take the cake.

7 thoughts on “From Tower Bridge to Baker Street”