Following our week of frolicking through Scotland (well, as much as you can frolic in puffy coats and big boots), I collapsed back in to Flat 12 and didn’t really feel like moving again for a good week.  But move again I did.

Amity’s sister Katie and her husband Chris came to visit for a week!  They arrived the day after our return from Scotland, and I got to spend a couple of days hanging out with them before I was repacking my bag and heading out to the airport (London City Airport, incidentally, which I hadn’t been to before). 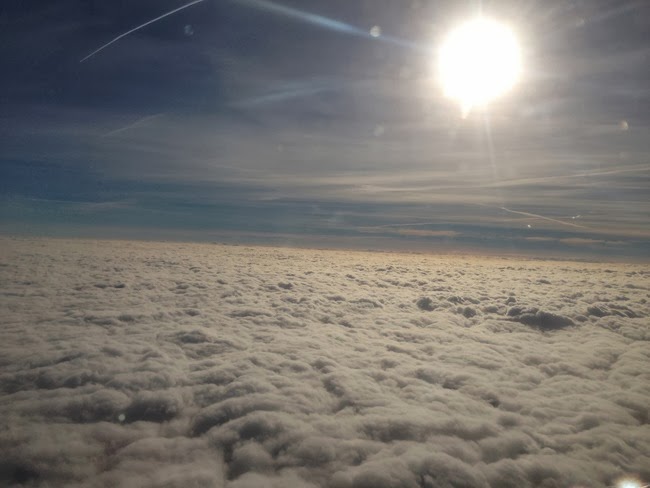 I started getting jittery with excitement as the plane descended through the clouds and I got my first view of Frankfurt, Germany. 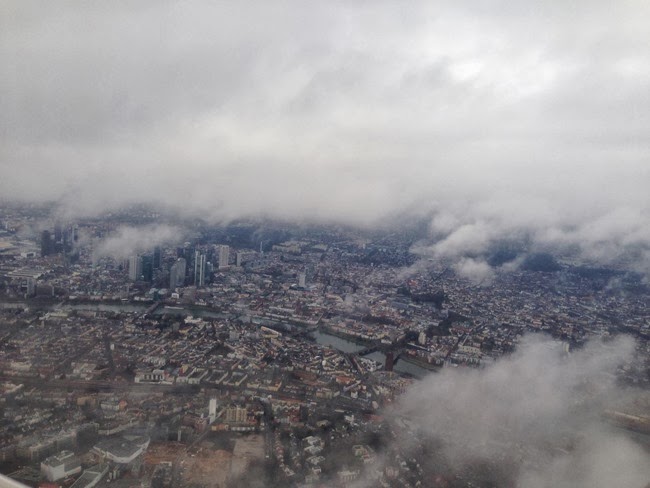 Who?  What what?  Germany?  Yes indeed!  I was off to spend a whirlwind Christmas reuniting with Katharina, one of my very best friends from New Zealand.  She pops up all over the place if you go back to the old posts from My Life as a Kiwi.  We’ve written letters and Skyped pretty regularly since we left NZ, but we hadn’t actually seen each other in three and a half years! 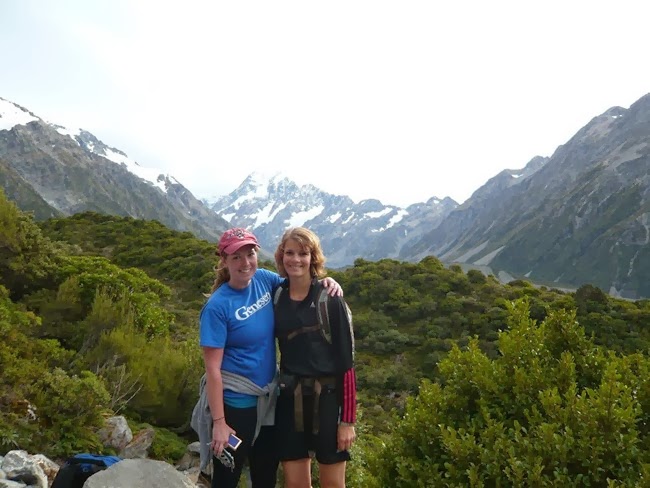 (Mid-tramp with Aoraki Mt. Cook in the background – wow, I miss that)

Needless to say, I was ecstatic at the thought of reuniting with Katharina and I couldn’t say yes fast enough when she generously invited me to spend Christmas with her family since I couldn’t be with my own.  I was also really looking forward to experiencing Germany for the first time, and seeing the country through the eyes of a local!

Katharina’s family lives in the southwestern region of Baden-Württemberg, so we had about a two-hour drive south from the Frankfurt airport (which was hilariously marketed as “Fraport”).  However, Katharina had adventures up her sleeve from the moment she met me at the arrivals gate, so our first stop was about halfway home in the beautiful city of Heidelberg. 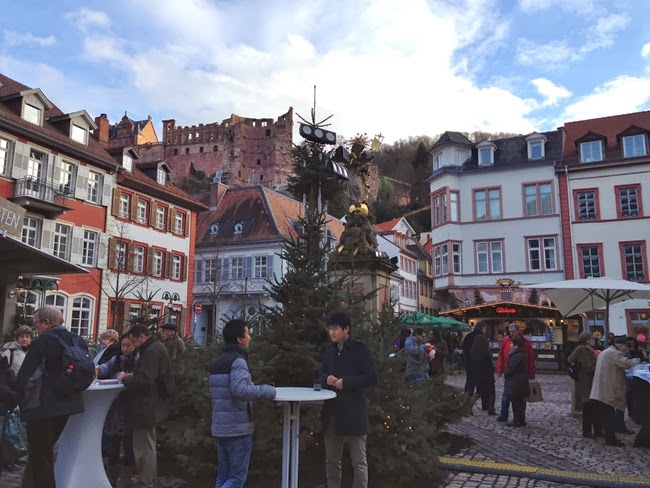 Heidelberg is just the picture of German heritage.  Like so many places in Europe, it has a really long and rich history, including being the home of Heidelberg University (Germany’s oldest university – founded in 1386!).  We spent most of our afternoon there in the Altstadt (Old Town), starting with one of the famous German Christmas markets, where we had Glühwein (mulled wine) and Flammkuchen (sort of a thin pizza with crème fraîche, onions, and bacon – also known as tarte flambée in French). 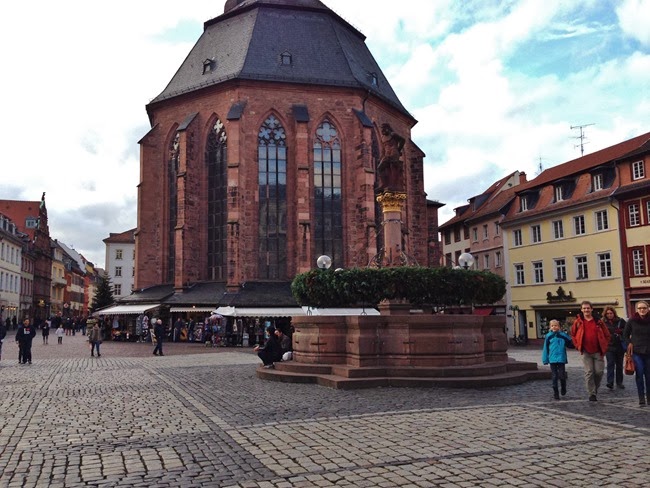 Katharina’s uncle, aunt, and cousins, who live in Heidelberg (that’s them traipsing intrepidly towards us in the picture above, next to the beautiful Church of the Holy Spirit), offered to show us around their hometown for the few hours that we were there.  I was thrilled to have built-in tour guides! 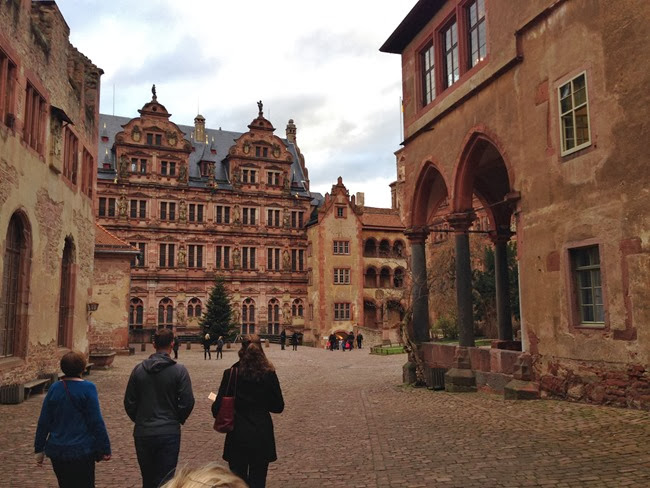 We spent some time just walking through town and enjoying the amazing architecture, and then caught the funicular railway up the hillside to one of the city’s best-known landmarks: Schloss Heidelberg, a partially ruined castle.  The castle provides an incredible vantage point of the River Neckar and the entire valley in both directions. 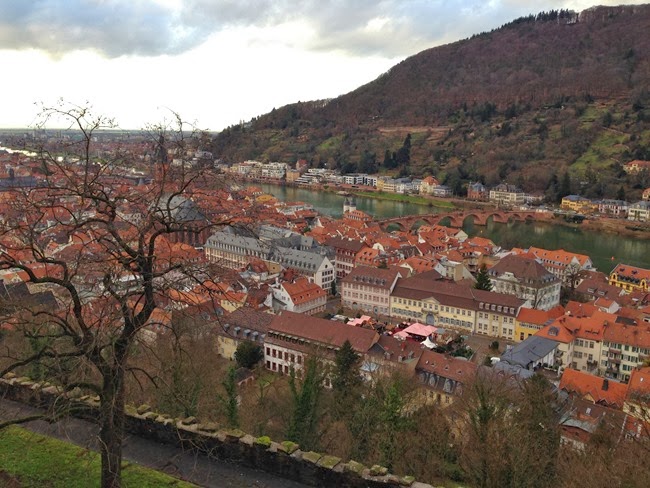 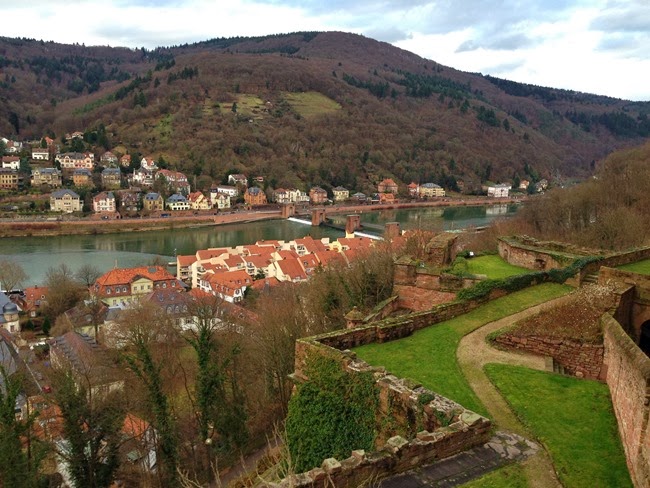 The castle was built, demolished, and added on to again in patchwork fashion over hundreds of years, beginning in the thirteenth century.  It has been hit by lightning twice, in 1537 and in 1764, and in both instances the lightning bolt actually destroyed parts of the stone and brick castle.  How’s that for bad luck? 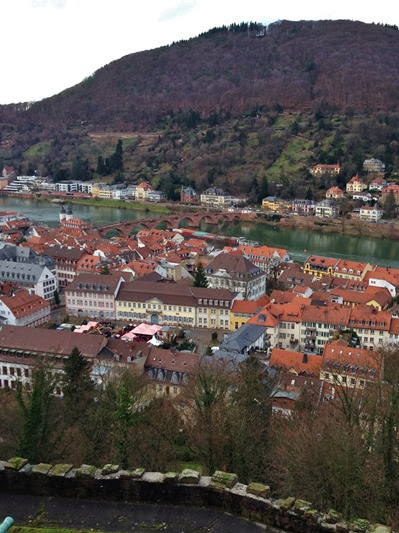 Many parts of the castle have been well-restored, but it is no longer a seat of any political or governmental activity.  It mainly serves as an important historic site and tourist attraction.  The view from the castle walls is like something out of Grimms’ fairy tales, with the blue-green river winding its way through the clusters of red roofs. 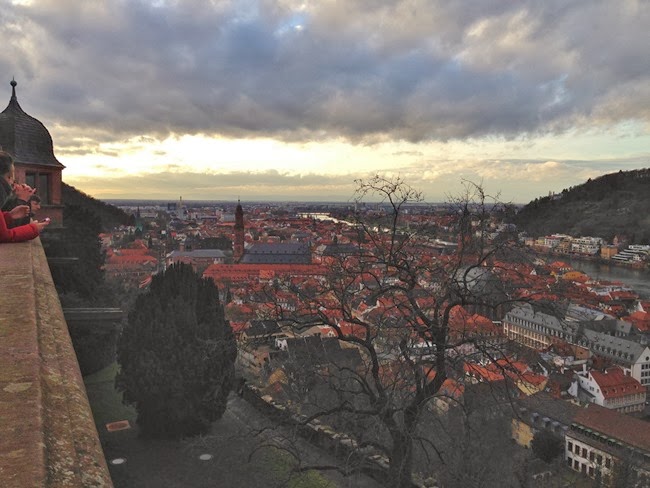 Some of the buildings in the castle still house exhibits and attractions, such as the world’s largest wine barrel!  Known as the Heidelberg Tun, it was built in 1751, is about 23 feet tall, and has a dance floor built on top of it.  Even ol’ Samuel Clemens visited it once!

Everybody has heard of the great Heidelberg Tun, and most people have seen it, no doubt. It is a wine-cask as big as a cottage, and some traditions say it holds eighteen thousand bottles, and other traditions say it holds eighteen hundred million barrels. I think it likely that one of these statements is a mistake, and the other is a lie. However, the mere matter of capacity is a thing of no sort of consequence, since the cask is empty, and indeed has always been empty, history says. An empty cask the size of a cathedral could excite but little emotion in me. 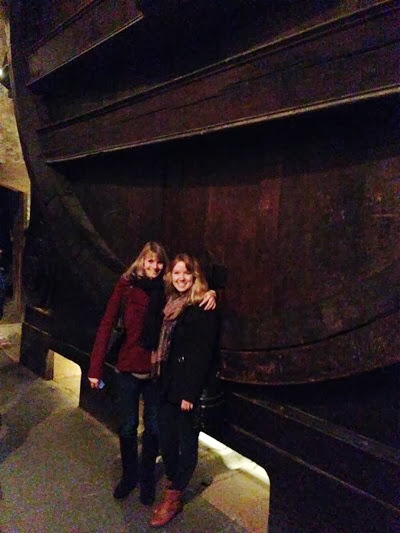 So, Mark Twain was apparently not too fussed about a big barrel, but I thought it was pretty cool.  Contrary to his assertions, it hasn’t always been empty (it was actually used as a wine barrel a few times) and it can hold almost 300,000 bottles of wine.  So phooey on you, Mark Twain.  Sorry, I didn’t mean that.

It also comes with a few good stories, as do most things involving that much wine.  My favorite was the story of Perkeo, the court jester, who is immortalised by this little statue right next to the Heidelberg Tun. 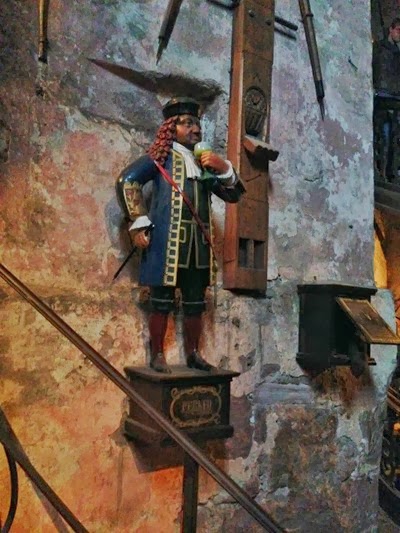 Perkeo was an Italian dwarf who became the royal court jester at Schloss Heidelberg in the 1700s.  He gained that nickname because he drank so much wine that he was notorious for answering “Perché no?” (“Why not?” in Italian) whenever he was offered another glass.  The legend goes that one day, he accidentally drank a glass of water and it killed him. 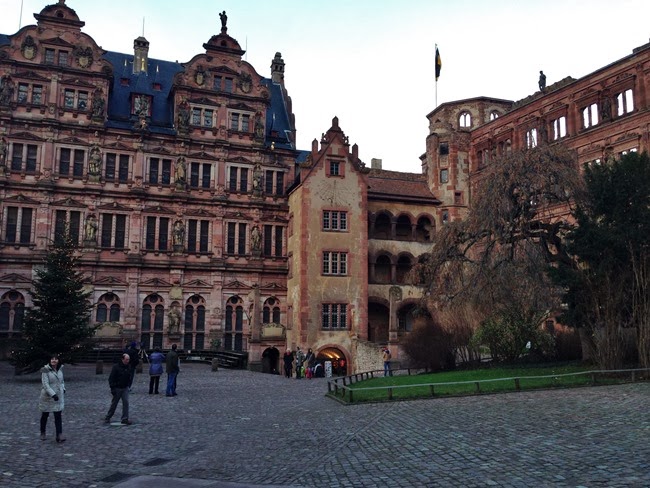 We crossed the courtyard of the castle as the light was starting to fade, and decided to take a quick walk through the Pharmacy Museum, which had fascinating and intricate exhibits of apothecaries and medicines as they existed in past centuries. 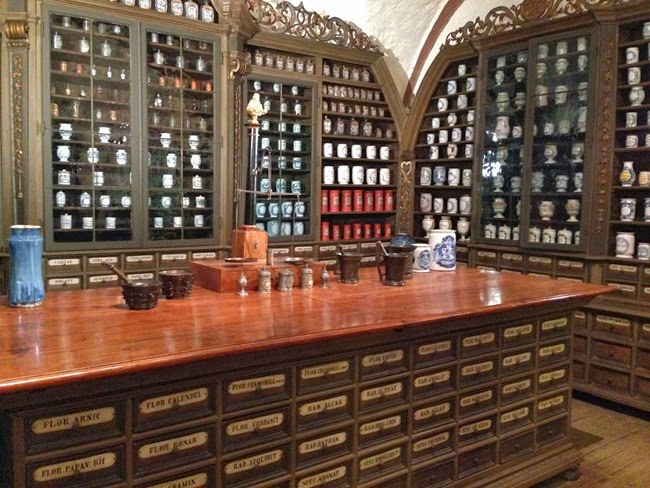 After our visit, we took the funicular back down into town, and as a result I had “Funiculì, Funiculà” stuck in my head for the rest of the day (Also, I had NO IDEA that song was actually about funicular railways.  I mean, obviously I don’t speak Italian, but I still thought that was pretty funny.) 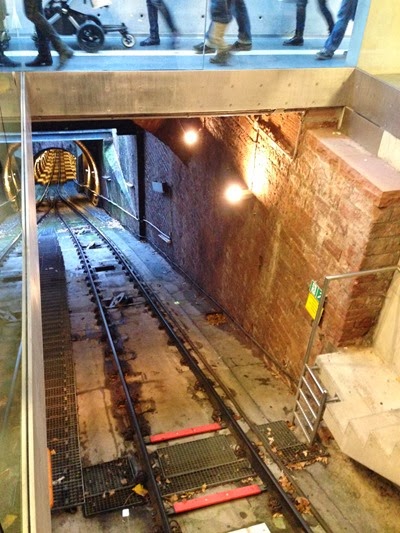 We strolled through the streets and stopped in for cappuccinos at a little café (it was nice to be back in a country where coffee is properly appreciated).  This is apparently where the big huge mother of all Christmas markets is normally set up, but it had ended just a few days before we got there. 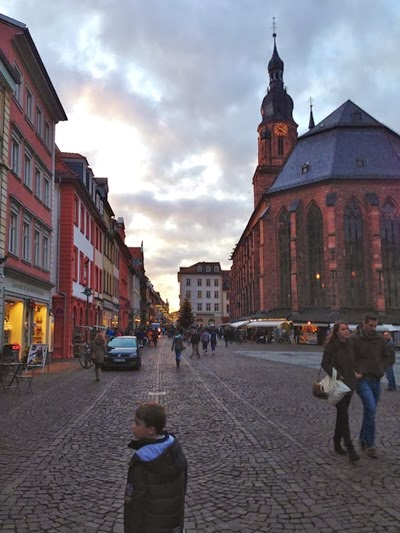 Our next stop was the Old Bridge, which is as much of a Heidelberg landmark as the castle.  You can see it spanning the river in all the photos above taken from the castle. 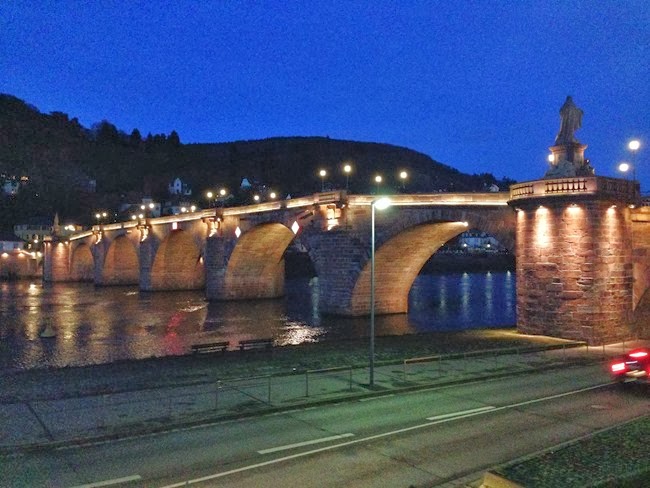 There’s a really cool medieval gatehouse at one end of the bridge which actually has a little apartment in one of the towers.  It’s allotted as student housing by a random lottery every year, and we actually saw the current occupant coming back with a load of groceries when we walked past.  That’s got to be one popular kid (for this year, at least). 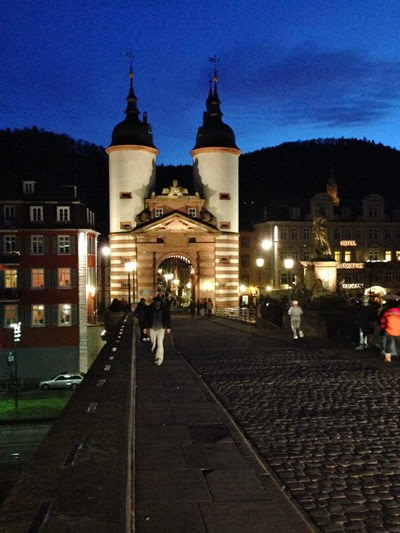 The last bit of the sunset faded away as everything along the river lit up.  So lovely! 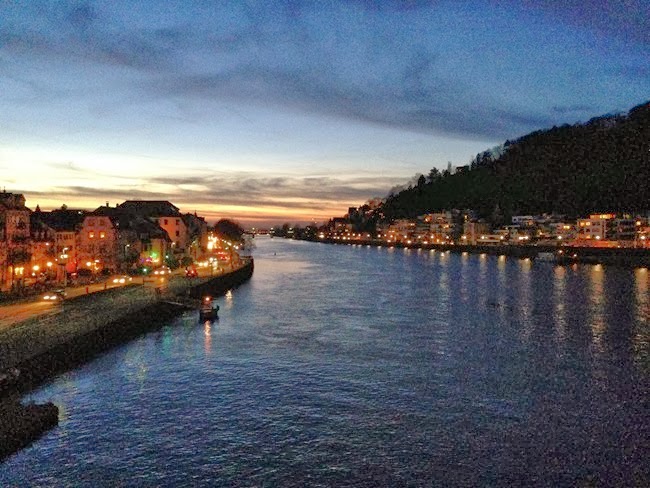 Amity studied abroad in Heidelberg for a semester during college and I remember following her pictures, so it was really cool to see some of those places with my own eyes!  I’m so grateful to Katharina, her family, and her boyfriend, Timo for being such excellent hosts and guides!  (I did not actually warn them that I was taking this photo, so it’s not their fault that they weren’t fully prepared.) 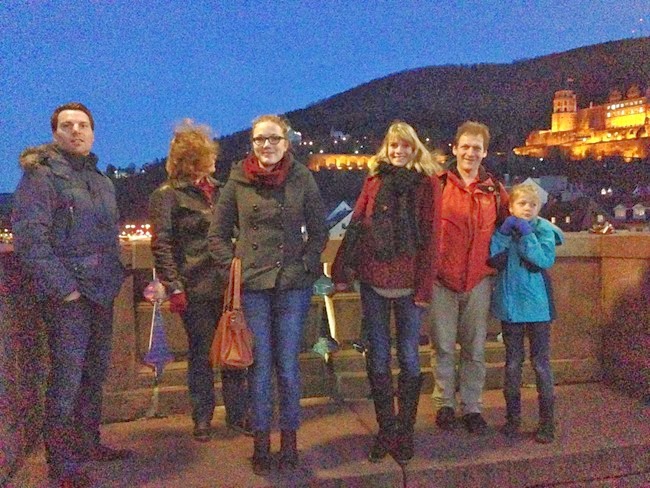 It was pretty windy and chilly by then (not to mention dark), so we said our goodbyes and Katharina, Timo, and I continued on our drive south.

About half an hour in to our drive, Timo heard on the radio that there had been a big accident resulting in huge delays on the highway we had been planning to take, so we had to reroute.  I didn’t think this was a big deal until Katharina turned all the way around in her seat to look at me and literally said, “We have to go through the Black Forest.  I would not go there in winter unless I had to, but now we have no other choice.”  She did not get why I thought that was so funny.  She was even making this exact face of trepidation!

Apparently the road through the Mines of Moria Black Forest can get really icy in winter, but we had met neither ice nor Orcs and made it alive to Katharina’s parents house in the end.

We stayed up just long enough for introductions and homemade Christmas cookies before collapsing into bed.  Heidelberg was a perfect introduction to Germany, and the adventures continued the next day…

3 thoughts on “Heidelberg: An Intro to Germany”