File this one away as another long overdue life update. Sooo… remember that time I said I was moving to California?

It turns out that the state of California had no interest in employing me (not actually the State – I’m speaking symbolically here). On the other hand, my dear old native New York was willing to welcome me back with open arms the nastiest winter in history.

And so I find myself here:

Three months in to a new job and new life in New York City and already, the city has morphed into a completely different entity than the one I visited growing up. It feels totally different living here, and as I predicted in that old flashblack post, a bit odd – I’m now so much more familiar with London than I am with New York, but the balance will inevitably shift.

I’m also experiencing different parts of the city than I did when I used to visit from upstate. I rarely leave Brooklyn on the weekends, and I haven’t been to Central Park in months. I’m trying to focus on settling in and not comparing it to London too much (although trading the tube for the subway has been a particularly devastating blow – yuck).

Overall, I appreciate being at the beginning of a new chapter that will let me explore somewhere new, which was exactly what I wanted. The fact that it’s a city close to where I grew up and with which I was already vaguely familiar only makes it more of an enticing challenge to find excitement and adventure in the daily routine – “a life exotic” and all that, you know.

And I’m not complaining about the view…

Expect the rest of the roadtrip posts coming your way soon before we start exploring New York. Lots more to cover there… we haven’t even gotten to the van breakdowns yet!

Once again, things are looking a little crazy around here.  Maybe I subconsciously adjust my blog to mirror the current state of my life/brain/desk, because they look pretty crazy, too.  I’m switching from Blogger to WordPress and there’s a lot to learn (although this tutorial from Nose Graze was a lifesaver!).

If you read this in your email or a reader like Bloglovin’ or Feedly, you might not even notice.  Regardless, I’ll have it all straightened out soon.  Soonish.

I had my first writing assignment due for grad school.  It was a book review, on a book that I found completely uninteresting and miserable to read.  Aside from being generally unpleasant, it was also making me seriously question whether this program was the right fit for me after all.

Granted, I was definitely overthinking things, but still.  This was our first assignment, I didn’t have any experience to tell me what the professors were expecting, and a text that’s supposedly central to my master’s degree sparked absolutely no interest in me.  Oh also my roommate was in Italy.  Empty flat = crazy hermit.

I was really, really stressed out.

One evening, I was leaving school just as the sun was setting.  Walking quickly would only get me back to my flat and my imminent workload faster, so I slowed down.

The Royal Courts of Justice buildings were reflecting the twilight, and the windows were lit up like they were on fire. 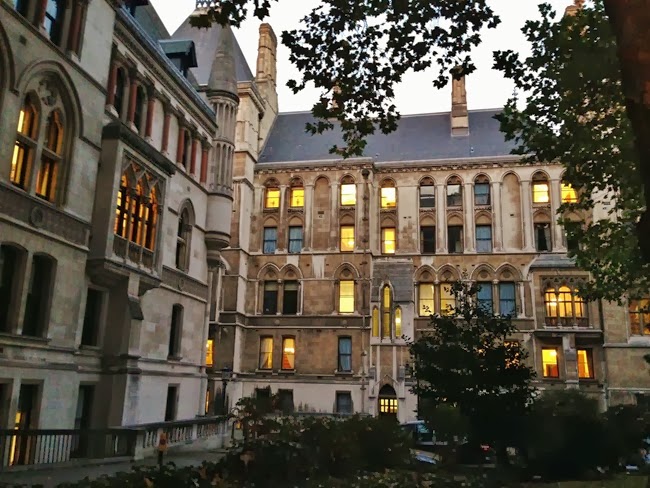 The sunset colors were blazing over the buildings of Fleet Street. 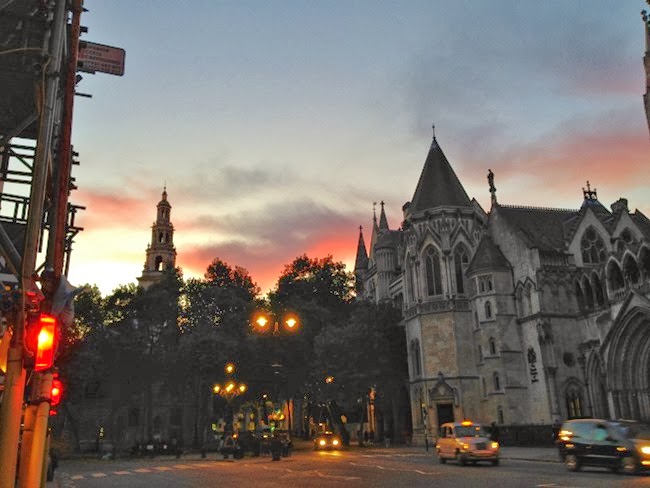 I crossed the Strand to head into my usual tube station, but I passed it by before I fully realized what I was doing.  I just didn’t want to go back underground yet.

I skipped the few extra steps down to the river, walked right up to the concrete railing, and took in the view. 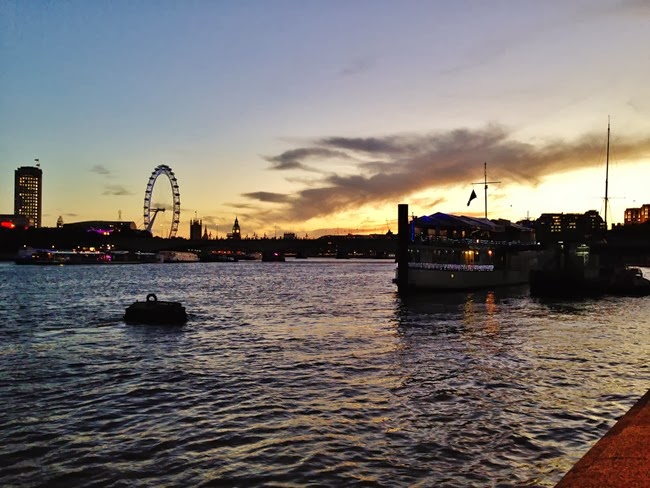 The sky was changing by the second, and everything along the Thames was just beginning to light up.  See Big Ben’s glowing face peeking out to the right of the London Eye?

I took my time walking along the embankment, stopping to take a few photos for tourists posing in front of the London skyline.  The air got bluer and more lights twinkled on. 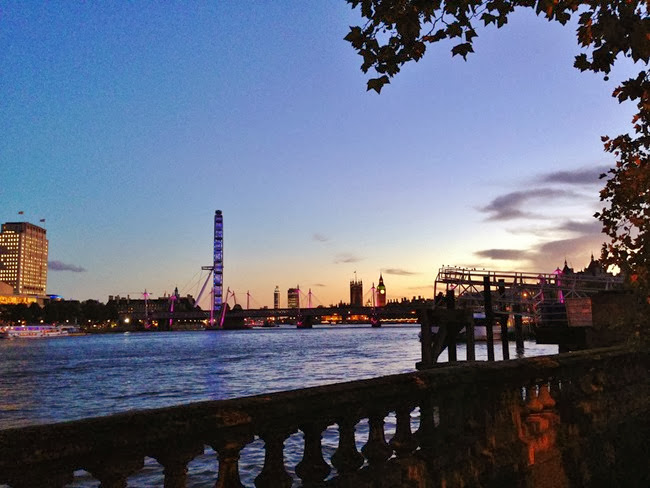 Waterloo Bridge was reflecting on the water and the needle-like Shard was sparkling against the sky (towards the right side of the photo – sorry this one turned out so grainy!). 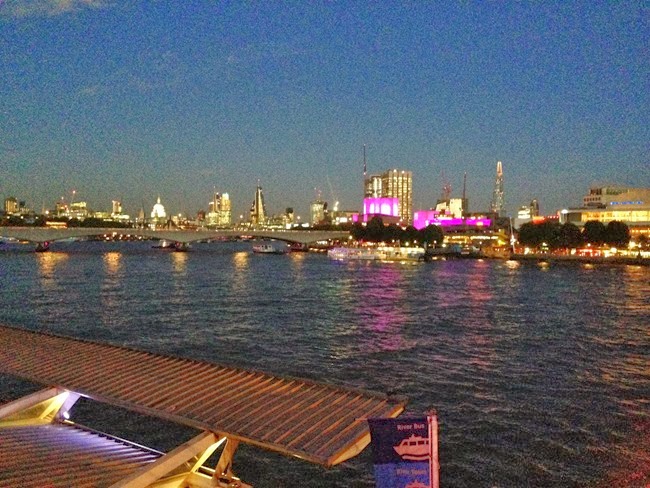 I climbed the steps up to the pedestrian Hungerford Bridge and looked back over the glowing Thames.  A front row seat to one of the most incredible cities in the world. 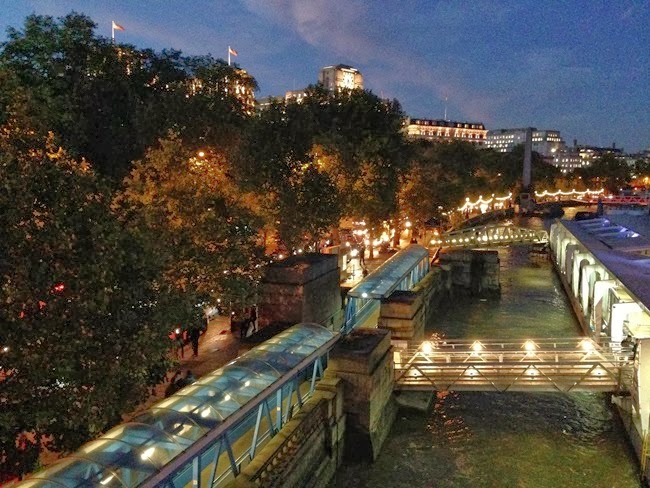 Before I knew it, I’d walked as far as the next tube station on my route.  Only because I DID have to do my schoolwork eventually, I hopped on the train there and headed home.

I wasn’t quite as stressed out anymore, though.  That twenty minute walk along the river had made me feel better than I had in days.  It was a good reminder that even when something goes wrong, there is still so much to be grateful for.  And I think I’ll take the long way home more often.

Now go ahead, go dig out your old Supertramp records.  You wanted to as soon as you saw this post title.