May I tempt you?

The combination of a master’s degree workload and the kooky oven in our little flat means that I have not been baking nearly as much in recent months as I used to.  The oven is so overenthusiastic about doing its job that it hits the preheat temperature and just keeps on going.  We don’t roast or bake things so much as strategically burn them.  Thank goodness we don’t have a sensitive smoke alarm.  Although I will redact that statement if I die in a fiery death.

I was sorely missing freshly baked banana bread, muffins, and most of all COOKIES, so I decided it was time to face the oven.  I thought I’d make something to share with a friend from school, who can’t have dairy, so I did a little recipe tweaking that led to the happiest accident I’ve had in a long time.

I have discovered the secret to super fudgy cookies, and it’s too good to keep to myself.  Get ready for the money shots.

And guess what?  It’s this guy:

Apparently, avocado makes a great substitute for butter in baking.  Just mash it up pretty well with a fork, and use the exact same amount as you would have used of butter.

I based my recipe off of this one for inside-out chocolate chip cookies from Sally’s Baking Addiction, but made a few alterations.  Instead of the original ingredient list, I used:

The milk (dairy or not) just keeps the dough a little bit runnier but is probably negligible.  The avocado is the big deal here.  It makes this beautiful shiny mess that’s more like brownie batter than cookie dough.  These cookies were better than regular cookies.  Butter be gone (haha no).

The results were REALLY squidgy and soft – baked all the way through, just not set up too stiffly.  I’ve made one batch with butterscotch chips, and one batch with chopped up mint & Oreo chocolate bars (I KNOW).

If you dive in when they’re hot from the oven, they’re super melty and delicious.

If you wait a bit til they cool, or just have a crazy oven that bakes certain trays way more than others, they hold their shape better.

You can’t taste the avocado at all, but it makes the cookies really moist and soft and keeps them from getting dry or cakey.

I’m officially converted to the avocado baking camp (that’s not a camp?  I’m going to form it).  These cookies were so moist and dense and fudgy, it was almost like a slightly underbaked brownie instead of a cookie.

My friend actually told me I could sell these.  I must share the compliment at least equally with the majestic avocado.

I like them best when they’re piping hot and falling apart, with a cold glass of milk on the side.  But it’s up to you.

I realized it’s been a while since I’ve shared any of my recipe experimentations with you guys, so I have a great one for today!  I’ve been wanting to come up with some fresh breakfast ideas to break up the neverending yogurt/egg sandwich/yogurt/egg sandwich cycle that I’ve been rolling with lately.  This one was Pinterest-inspired and ended up being a super success!  Sorry in advance for the not-so-lovely photos.  I can’t find my camera anywhere this week, so they’re all phone snaps. 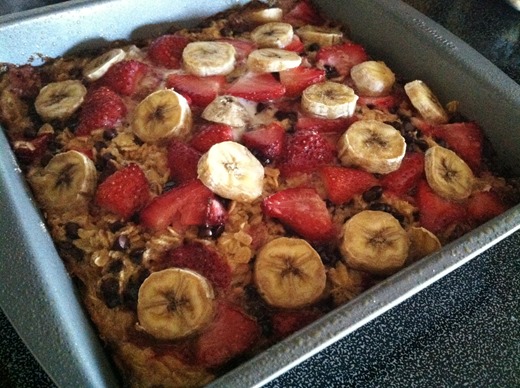 I came across this recipe from Inspired Taste on Pinterest and it met my two main criteria for a recipe: it looked yummy and I already had all the ingredients.  Done!

I stuck to the basics, but made a handful of changes and substitutions, most notably omitting all the sugar.  It would probably be a little more dessert-y with the brown sugar included, but I wanted to make it a little healthier and I figured it would be plenty sweet enough with the fruit and chocolate (it was!). 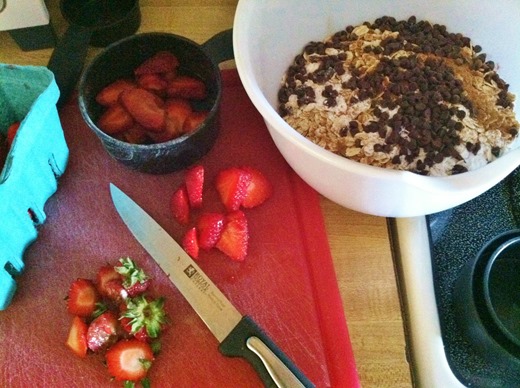 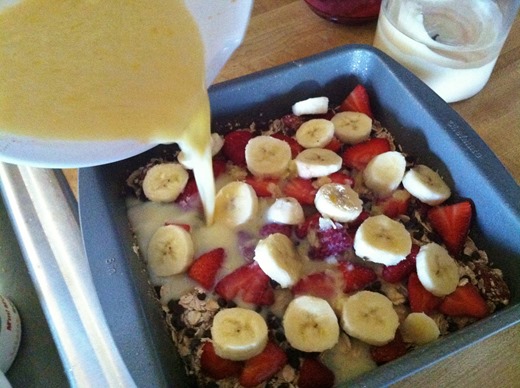 This baked oatmeal turned out pretty perfectly!  I had a big square when it was hot out of the oven and the chocolate was all melty and gooey – yum.  This morning, I had a slice cold for breakfast with a big dollop of Greek yogurt on top and it was excellent like that, too!  This will definitely be a new breakfast staple – it was so easy to make and is naturally customizable if you use different fruit, no chocolate, keep the brown sugar topping, add peanut butter (peanut butter baked oatmeal… brain wave!!), etc…

One quick note: this would be a great meal to make for a big breakfast gathering where it would be gone in one sitting.  If you’re not going to get through it all at once, store it covered and refrigerated or you will be sad.  I made some beautiful blueberry lemon coffee cake a couple of weeks ago and had only one slice, because I didn’t think to refrigerate it (duh) and the milk in it turned.  Blech.  The bananas on top will brown after being in the fridge, but it tastes the same.  Maybe a squeeze of lemon juice would help that?  Or you could not use bananas.

This batch is already almost half-gone, but I might experiment with doubling the recipe and baking it in a 13” x 9” dish to make it go farther.  Or you could make it in muffin tins to create individual servings – even easier for grab-and-go breakfast and snacks! 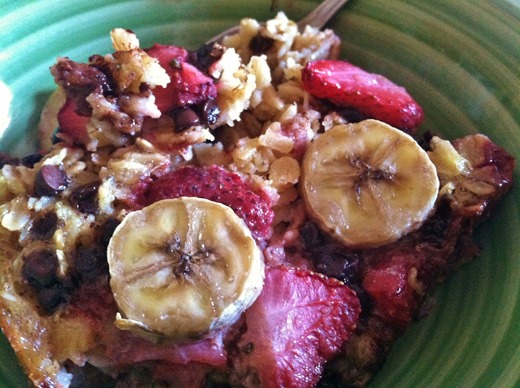 I’ve been even busier than usual lately (the countdown is on: less than two months left on the Outer Banks!  happysad) so this is the first time I’ve baked something in a while, but now I’m craving it again!  I have a few overripe bananas staring at me from the fruit bowl that have some serious bread potential… mmm.

Any great new recipes out there?

This recipe is based around rolled oats, Greek yogurt, and applesauce. 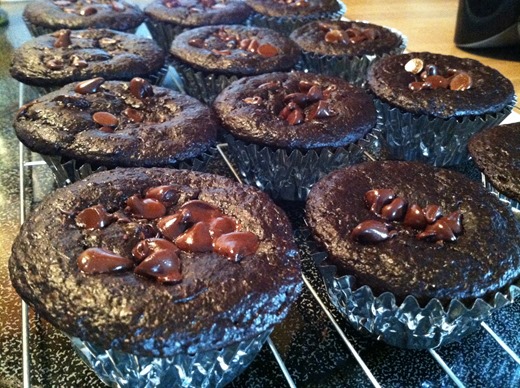 Not what you were expecting?

I had a serious hankering for tasty baked goods last week and planned to use up the last can of pumpkin that’s still chilling in my cabinet.  While I was trolling around Pinterest looking for a fun recipe, I found this recipe for chocolate chunk muffins and all pumpkin-y thoughts vanished from my mind.

The blog I found that recipe on focuses on a lot of healthy baking alternatives, but tends to take things a bit farther than I really care to (I am totally not on the Stevia train.  Eat real sugar.  Just don’t eat a ton of it.  Sorry for this long parentheses sentence.) 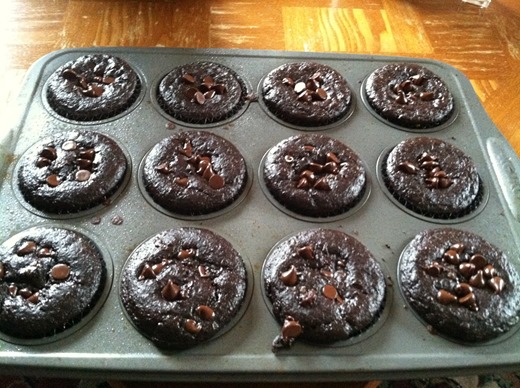 Another train I am not on is the overly-complicated-baking train (I will never have the patience to sift all my dry ingredients together), which is why I was immediately hooked by the fact that you make this batter by putting everything in the blender… and that’s it.  No separate mixing, stirring, or anything else.

So anyway, here’s my version.  I altered the recipe I found in a few ways, especially by using vanilla Greek yogurt instead of plain and omitting almost all the extra sugar/sweetener. 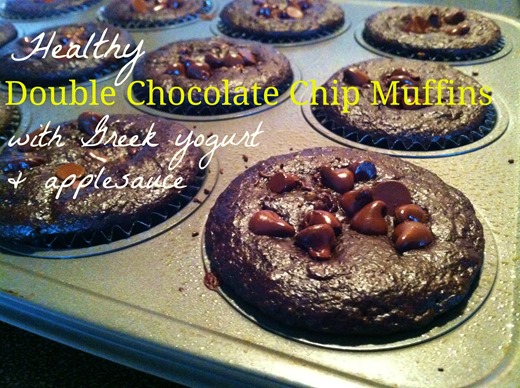 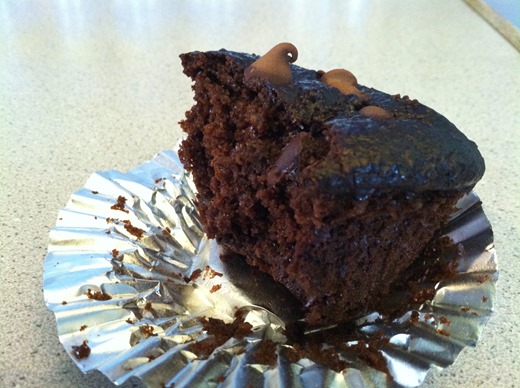 These are awesome.  In my opinion, chocolate muffins are way better than chocolate cupcakes because they’re just as rich and chocolatey without being sickly sweet or too cakey.  So if that description is not vague enough to intrigue you, then I’m out of ideas.  But try these.  They’re spongy, dense, and fudgy.  So good.  Mom, you should make these.  Paul will not even know that they’re healthy.

I ate two of them for breakfast yesterday.  I don’t even feel bad about it.  Because of applesauce.