Well, classes here at UC are officially over.  I had my last two yesterday – last biopsych lecture, and Te Reo Māori final exam.  I have never been so sad to finish a test, and not solely because it meant saying goodbye to Phil and Corban and Anton (if only all classes came with three attractive Māori tutors), which was heartwrenching enough in itself.  I’m really going to miss my classes here, and being at uni in general.  Even if (I mean WHEN) I come back to New Zealand someday, it won’t be as a college student and I won’t be studying here.  Going to classes was a big part of really living here, and it’s sad that those parts of the trip are ending!  I’ll only be on campus again for my couple of finals at the end of the month, so I was going through a sort of Goodnight Moon monologue in my head as I was walking back from Aotahi today… 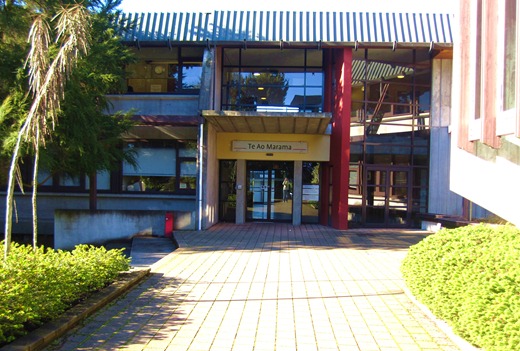 Last look at the School of Māori and Indigenous Studies

So many little details about my routine here that I’m going to miss!  Maybe I’ll put some more work into making it rhyme… anyway, on a more cheerful note, I’M GOING TO AUSTRALIA TOMORROW!  Montana and I are hitting Cairns to dive the Great Barrier Reef and Brisbane to visit a friend from Geneseo and go to an aboriginal music festival, and then I’m flying solo in Sydney for a few days.  It’s going to be sweet as – I’m really excited, but at the same time I almost feel guilty about spending a week and a half away from New Zealand!  Ah sorry, there I go again…

Well, it’s a typical Tuesday night in flat O119 – we’re all in the living room with mugs of tea, too many Cadbury bars, and a movie from The Hub.  I’m also studying for Māori – we have our oral exam in two weeks and I have to recite my entire mihimihi (the traditional way to formally introduce yourself in Māori) from memory.  It’s sort of difficult having to write my mihimihi as a pākeha because I don’t actually have a river or a tribe or all the things we have to talk about.  Philly’s pretty chill about it, though – he told me to just say my car when I talk about the canoe that brought my ancestors to New Zealand (which obviously didn’t happen).  I totally bonded with a girl in my tutorial today when we were talking about this, because she asked if she could say her car’s name, Big Red, and then I said I have a Subaru Forester, and then she said that Big Red IS a Subaru Forester, so I told her that mine’s name is Perry… and it was super exciting and we’ll probably set up a playdate for the babies when we’re back in the States.

I have another three-week break next month between the end of classes and the beginning of finals, so I’m going to have a little more time to travel, and I booked a lot of things for that yesterday.  Montana and I are going to Australia for about a week and a half, and then Chelsea and I are going to Dunedin for a couple days to see the All Blacks game!!  They’re NZ’s national rugby team and everyone is completely obsessed with them here.  I reeeeally wanted to see them play while I was here but I didn’t think I’d get to.  First of all, they’re amazing, and second of all, they’re famous for doing the haka (Māori battle dance – YouTube it) before games, which is really cool and intimidating if you’re the other team.  It’s weird… I’m really excited about all that, but also sad because I’ll only have a week or two left here at that point.  That’s weird to even think about.  I’m so settled in here: I’m used to the grocery store, I have my favorite coffee spots and loyalty cards, and I haven’t looked at the metro map in months.  I wonder what I won’t be used to at home when I go back… for one thing, I’m pretty much resigned to the fact that I’ll most likely get hit by a car the second I try to cross the street since I’m so used to looking right now.

Well, let’s not dwell on that.  Here’s an interesting something: after much careful observation, I have concluded that my original perception was correct and that my environmental psych prof does in fact say “Excedrin” instead of “etcetera.”  It is even more hilarious than it sounds.  I thought I misheard him the first time, but no, he really says that.  As in: “Ineffective building design can cause unused space, wasted resources, confusion, Excedrin, Excedrin, Excedrin.”  Yep, folks, this is fo’ real.

Well, that’s all I got, but I don’t really know how I’d top that anyway.  A belated Happy Mum’s Day, as the Kiwis say, to all the mums out there (I told my mum on the actual day, don’t worry)!

EDIT:  I began three of those paragraphs with “well.”  Oh well.

Tēnā koutou (hello everyone), it’s been a while!  Never fear, I have not been swept away by a tsunami or eaten by a wild animal.  HA, trick statement, there are no wild animals here, except for possums and birds.  No snakes, even.  Weird, right?  Even the possums aren’t the horrible disgusting ones we have at home; they’re actually kind of cute, and if you know me at all, you know that I’m the last person in the world to give a possum any more flattery than it deserves.

So, where have I BEEN?  Well, to start, we declared last Friday night the first official pancake night and the second official Pirates night… pretty much an unbeatable combination.  Katharina made German pancakes (which, despite my German mum, I had never had) with beef and veggies for dinner, I made chocolate chip American pancakes for dessert, and Erika provided the most delicious pineapple I have ever eaten.  We also started trying to plan some of the travel we want to do for the rest of the semester, which was really exciting but had the unfortunate side effect of making me wish I didn’t have to go to school here and could just wander aimlessly around New Zealand meeting hobbits and going zorbing.  Alas.  The three-week break in April is also starting to seem shorter and shorter as I keep adding destinations to my prospective itinerary.  I think I’m going to suggest to Geneseo that they add a “do-whatever-you-want abroad” program to their list of options, because I’d totally sign up for that.

Saturday night a few of us went to Sol Square in town, where we discovered a live music act that I may love more than Ollie & Topia.  FALSE that is not possible… this guy was really good, though.  His name was Willie McArthur and he was Scottish and had a long list of possible request songs that was clearly labeled, “This is NOT karaoke!”  No prob, Willie.  After that, we went to this really cool fish and chips place that wraps its chips in newspaper from 1964 and had a dance club upstairs that gained my immediate respect by playing my new favorite song, Memories.  Emir was acting alternately like a grampy and a cat, all the while cranking out his incredible French dance moves.

Sunday was a strange day… I woke up to a bunch of frantic emails/texts/messages from people at home making sure I was staying away from the beaches because of the approaching tsunami, which at that point I hadn’t heard anything about.  We were actually supposed to go tramping and cliff-jumping at Taylors Mistake near Sumner Beach that day, so those plans were obviously postponed.  When I found out that the tsunami warning was the result of an 8.8-magnitude earthquake in Chile, though, I wasn’t really concerned with the effects on New Zealand.  We didn’t hear from Camilo until the following afternoon, which was extremely nerve-wracking as his town is roughly 50 miles from the epicenter.  He and his family are all okay, though, and doing a really awesome job of helping each other out and starting to rebuild their community, much of which has been completely destroyed.  His city, Chillán, was the location of the huge jailbreak that’s been on the news, but Camilo assured me that he singlehandedly scared the escaped inmates away by throwing rocks at them in true Chilean fashion.  Coolest.  Brother.  Ever.  (Oh, except for my other brother, who is pretty much a champ at college admissions!)  In the end, the tsunami turned out to be a dinky little wave that barely touched the NZ shores – laaaame.  They actually showed “breaking news footage” on TV of some dude’s rowboat being gently rocked to and fro when the “tsunami” hit, which was pretty hilarious.

Other than that, the first two weeks of classes have marked a significant downturn in all things remarkable.  It’s still exciting to be in New Zealand and at a new uni and all… but on some level, it’s still just class.  My te reo Māori class is just getting better and better, though.  I love studying a language again.  Māori is very different from French and Latin (the other languages I’ve studied), which are relatively similar to each other and to English when compared to Asian and Eastern Polynesian languages like Māori.  The trickiest thing about te reo Māori is the tohutō (macron), which is the little line over certain vowels.  It’s simple enough in function – just makes the vowel sound longer – but really difficult to remember and get exactly right in pronunciation.  It’s pretty critical, though… for example, “keke” means “cake,” while “kēkē” means “armpit.”  Don’t really want to go mixing those two up.  Unfortunately, the class got slightly less awesome this week because our amazing tutor, Duane, is being replaced.  He’s apparently teaching too many hours, so Aotahi (the school of Māori and indigenous studies) is taking him off our class.  He was sort of a behind-the-scenes lecturer during our two class periods a week, and also led the weekly tutorials, which are sessions with a smaller number of students where we go over class materials and get more one-on-one attention.  Anyway, Duane is like a great big Māori Barney, and so much fun… he taught us a Māori alphabet song to the tune of “Stupid Cupid” and spent twenty minutes of our first tutorial having us guess his favorite sandwich (correct answer: butter, peanut butter, chicken chips, and tomato sauce).  As cool as Philly-Bro-Cuz is, TREO110 won’t be the same without Duane.

Random notable incident of late: Erika and I tried kiwifruit/pavlova ice cream in the city center a few days ago, which we were really excited about because you can’t get more New Zealand-y than that combination!  Unfortunately, it was super gross and definitely not sweet as.  It was like vanilla ice cream with mysterious crunchy pieces of “meringue” (lies) and weird gooey kiwifruit jelly-ish stuff.  Ick.

EDIT:  As I was writing this, there was a knock on the door, which turned out to be some 35-year-old guy I’d never seen before inviting me to a free “bus trip” (read: pub crawl) leaving in 20 minutes.  I might have briefly considered it if he hadn’t opened the conversation with, “Hello!  Don’t worry, I’m not here to rob you.”  Well thanks, bud.