So I finally arrived in New Zealand… only 33 hours after leaving home.  Other than being ridiculously long, the trip wasn’t bad at all.  Christchurch is quite lovely!  I’m all moved into my apartment and my room is set up, so I already feel like I’ve got my own space.  There are lots of cubbies/drawers/wardrobe space for organizing (EXCELLENT) and I have lots of room for activities!  My flatmates (five of us all together) are really nice – but all from America!  The flat is really nice and we have a balcony with a lovely view. 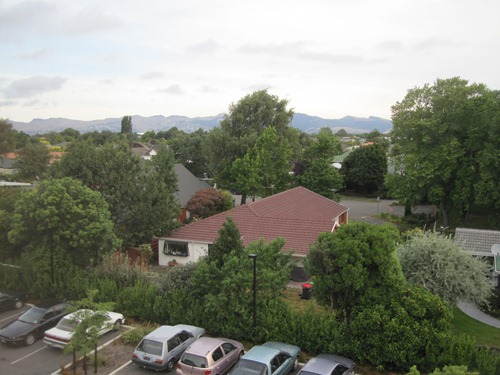 Upper Riccarton as seen from flat O119
The first night I was here, I was so exhausted that I tried to watch a movie but fell asleep even before Harry and Ron flew the car to Hogwarts (I know, really).  I’m pretty much recovered from the jetlag now, but the change in daylight is throwing me off – I expect it to get dark around 5pm!
I’m still at the stage where I’m trying to find my way around the town and city, but I already love it.  Everyone is so friendly… sometimes to excess.  We met an interesting fellow named Gav last night at The Bard on Avon.  He had a really impressive mullet and liked to talk about barbecues.  Today was beautiful weather yet again, so a few of us went into the city center and climbed the Christchurch Cathedral tower.  It was very slightly terrifying but the rickety winding steps were totally worth the view from the top! 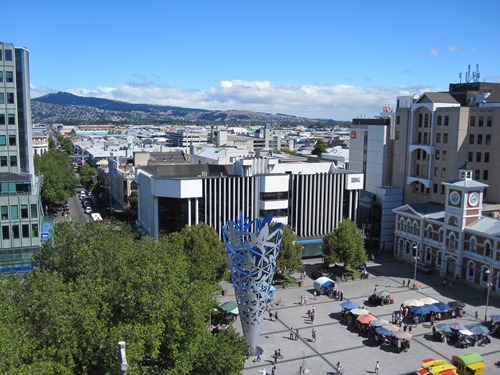 Some things are the same as home here but a lot of things are different… you notice it most in the grocery store.  Skim milk is trim milk and chocolate-covered raisins are sultanas.  My cereal contains rolled triticale – I have no idea what that is but it sounds dangerous.  The “yield” signs say “give way” and instead of “exit” it’s “way out”.  I also heard a little Kiwi boy in the airport say that he was “sweating armpits”… but that may have been an original.

I’m trying to do as much as possible before orientation and classes begin, although I think there will still be plenty of time for traveling once they do.  I might go hiking this weekend or next, which I may write about when I return as there probably won’t be internet access in the Shire.  Cheers!

5 thoughts on “Greetings From the Future!”