Well, I have officially been oriented.  Or perhaps orientated, it really wasn’t clear.  Orientation at Canterbury was very different from orientation at Geneseo.  There was a lot of getting to know the campus and general information about life in Christchurch, which was really neat because it was like an introduction to our actual lives here instead of purely academic.  I think they kind of leave it up to us to get to know each other, which has been working relatively well although I’m so far calling everyone by where they live because names are too hard to remember.

So, this morning we started with a lecture from the head of the school of indigenous studies, and we all sang a song in Maori and learned a bit about canoe making and cannibalism (the professor promised us some good recipes if we take his class… apparently that’s an incentive?).  Then we got to wander around campus for a while.  It’s not quite as big as I thought it was, and SO beautiful.  The library has eleven stories, with yet another of New Zealand’s amazing views from the top: 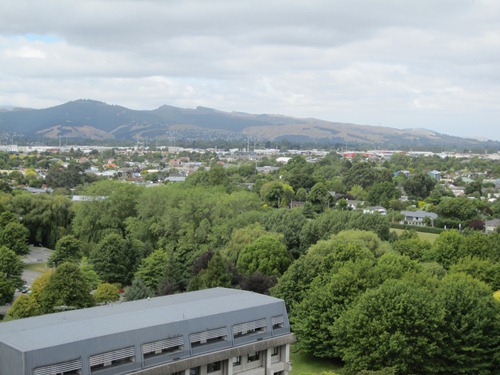 We also had a catered lunch that would put CAS to shame.  Kiwis are really into sausage, I’ve found.

Update: my RA, James, just stopped by to give us laundry bags, wall calendars, and travel mugs.  The free stuff is still pouring in!  I think James said “sweet as” about ten times in our five-minute conversation.  Apparently that’s New Zealand slang instead of “awesome” or “cool”.  Everything’s just sweet as… but not sweet AS anything… just sweet as.

I haven’t actually met many Kiwis yet, because it’s only international students here so far, but approximately 90% of the Kiwi guys I’ve met so far look exactly like Edward Norton.  So that’s neat.