One of the coolest things about the first week at uni was that they WOULD NOT STOP giving out free stuff – bags, coupons, sausages, jandals – you name it.  The best hand-out by far was a personalized voucher for a seat on the Christchurch Grand Tour (a ticket normally costs $100 and we got to go for free!).
A few of us had been trying to decide on a weekend to do this for a while, but weather or other plans kept messing things up.  This past weekend was supposed to be rainy, but the forecast cleared up at the last second when New Zealand remembered that it’s New Zealand and therefore perfect, so we jumped on it and booked seats for Saturday.  Luckily, you get to come with me through the magic of modern-day digital photography!  Come on!
The morning did start out pretty cloudy, but it was still nice weather to be outside in.  Naturally, we had a really great bus driver named Owen, who was probably about 60 and had a twin brother who is a Chch tram conductor.  Owen took quite a liking to the four of us (I went with Erika from Geneseo and my flatmates Chelsea and Laurie) and immediately took it upon himself to find us all Kiwi boyfriends.  His first idea was to set us up with his son the doctor, but after about an hour he decided that, being 36, his son was actually a bit too old for any of us.
Anyway, first stop on the tour was a walk through a different part of the city gardens than I’d ever been to.  They were smaller and a bit more secluded than the Hagley Park botanical gardens, but had the same beautiful rose garden in the center! 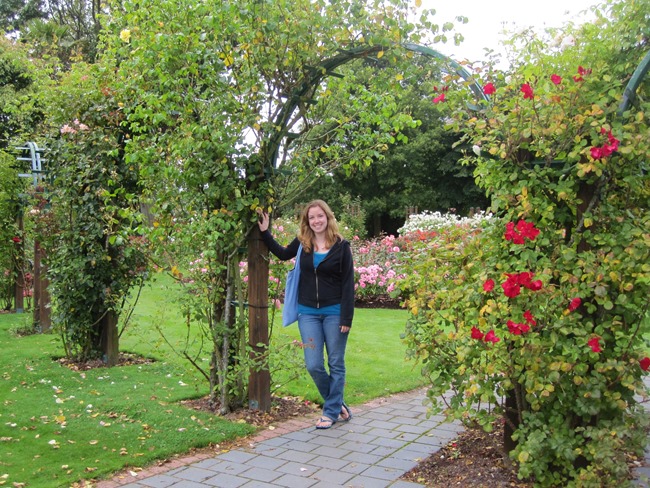 Then we went punting on the Avon River, which was seriously like going back in time.  The punters even wore these great barbershop quartet outfits, complete with bow ties, vests and straw hats.  We sat in these really wide, shallow boats (called punts), and our punter stood on the back and miraculously did not fall off, a feat I could never have hoped to accomplish.   There’s not even the slightest rim around the platform where they stand, and they have to both propel and steer the punt with a really long pole.  Our punter was Canadian and really fun, and gave us great commentary during the entire boat ride.  Here’s a neat fact: all of the willow trees in Christchurch descend from a few willow sprigs that were brought here from Napoleon Bonaparte’s grave.  Chelsea even tried punting, and I personally believe she has found her calling. 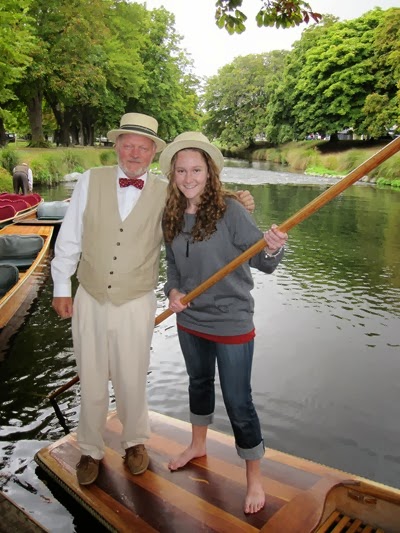 After that, we hopped back on the bus and drove up into the Port Hills in the suburb of Cashmere, on the outskirts of Chch.  We made a relatively quick stop at The Sign of the Takahe, a restaurant and cafe built to look like a small Scottish castle.  Unfortunately, it was closed, which upset Owen more than anyone, so we took the time to climb around on the rocks and take in the amazing views. 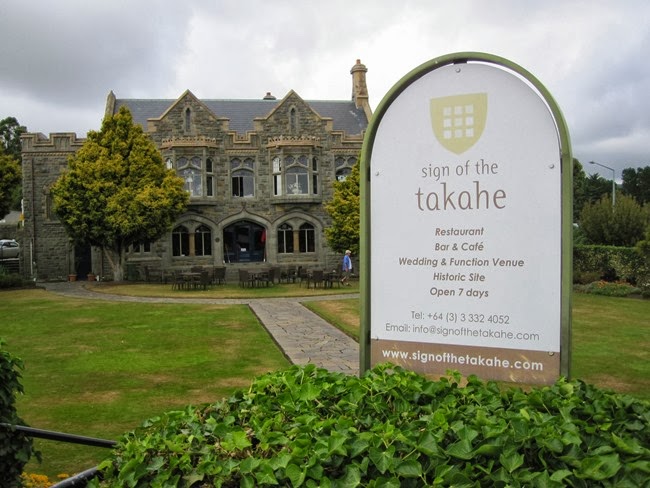 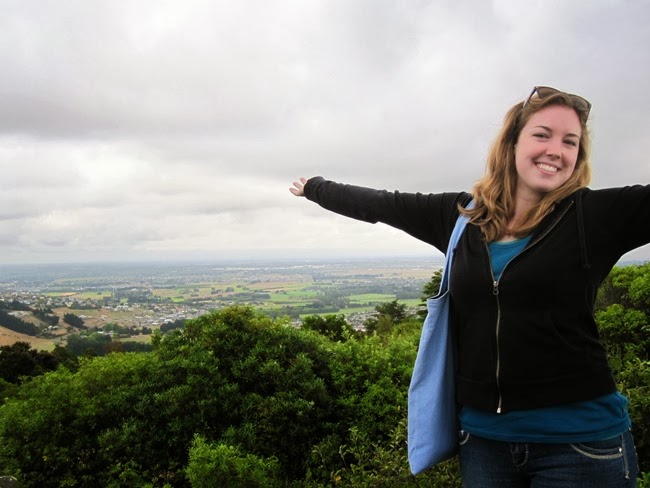 Our next stop was the gondola, which took us WAY up into the Port Hills.  Luckily, this was right about when the clouds finally decided to get the heck out of our way.  I got an absolutely gorgeous and completely delicious latte at the cafe at the top, and we had a great view of Sumner Beach (our next destination) in one direction, and our city in the other. 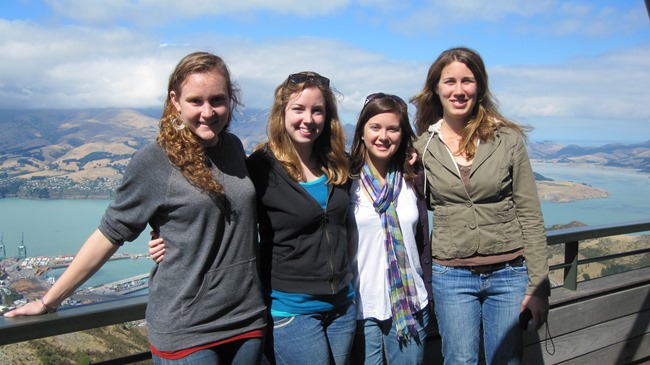 After the gondola, we went to the village of Sumner for lunch and had what’s quickly becoming our staple meal: hot fish and chips with cold cider.  We also had a while to walk around on the beach and explore in Cave Rock before leaving.  After half an hour and numerous suggestions from Owen of where to find young single men, we were back in the city center.  Our tour vouchers also included a ticket for the city tram (just like old-fashioned trolleys), but we decided to do that another day since we were pretty exhausted.  It was definitely one of the best day excursions I’ve had since being here, and we never even traveled outside the border of Christchurch!

In other news, I’m going to Mt. Cook (New Zealand’s highest peak) this weekend, which, apart from being AMAZING, will be the maiden voyage of my brown and blue hiking shoes!  Perhaps my next blog entry will be a weekend of tramping from their perspective.  So stay tuned for that, folks, you don’t want to miss out on this cutting-edge travel journalism!