Okay, it’s alright, don’t fret, I’m here!  It appears that the more amazing my adventures are, the longer it takes me to write about them.  You could say there’s a direct correlational relationship between level of amazingness and length of time before a related blog entry appears (see, I still go to school).
Before we begin, I must issue a disclaimer: it’s me writing, just Julie, not my beautiful brown-and-blue hiking shoes.  I’m sorry, I know I almost-promised (but didn’t actually! ha!) to write from their perspective, but they spent most of their time very close to the ground and therefore did not see nearly as much as I did.  All good?  Okay.  On y va!

So, this past weekend a bunch of us went to the Aoraki Mt. Cook National Park area to go tramping.  Our motley crew consisted of myself, Erika, Chelsea, Katharina, Queue, and our fearless French friends, Amaury and Mélanie, who were wonderful enough to drive us all in their eight-person van.  We left on Friday afternoon, after I’d spent my two required hours of quality time with a sheep brain in biopsych lab.  It was kind of drizzly and gross when we left, so we were worried about the weather for the weekend, but it cleared up as we got further west.  We stopped briefly at Lake Tekapo and Lake Pukaki on the way there, began our whirlwind love affair with the self-timer setting on our cameras, and hurried on to our hostel in Twizel. 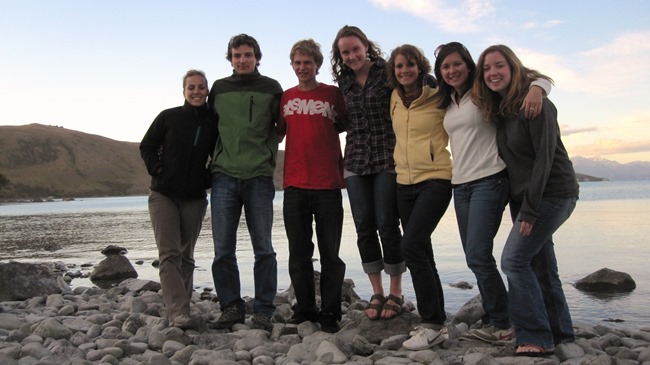 The next morning, we set out for our hike bright and early… it was about an hour’s drive from Twizel to Mt. Cook village, where the tramping track started.  We climbed Mount Ollivier, which was the first mountain that Sir Edmund Hillary climbed – he was the first person to climb Mount Everest, but I think this will be as far as I go in following his footsteps.  This was one of the most incredible, most rewarding things I’ve ever done, but it forced me to seriously contemplate a new phenomenon: death by exercise.  I thought I had hiked before… apparently not.  Mt. Ollivier is 1,933 m (6,342 ft) high, about 1,000 feet higher than Mount Marcy (the highest peak in the Adirondacks).  The trails in the Adirondacks are also nicely cleared, easy to follow, and, oh, not on a sixty-degree incline.  The trail we were following up Mt. Ollivier does not even deserve that name; the first half consisted of steps designed for giants, the second half was just rocks and boulders, and the entire thing was insanely steep. You should know that this is mostly my burning leg muscles talking; it really was amazing. 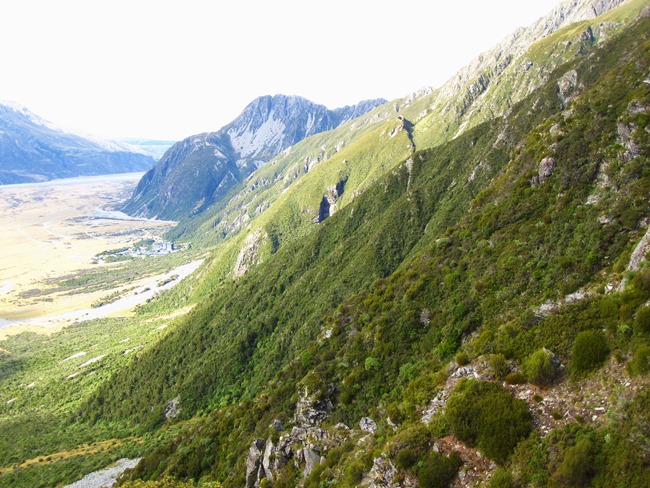 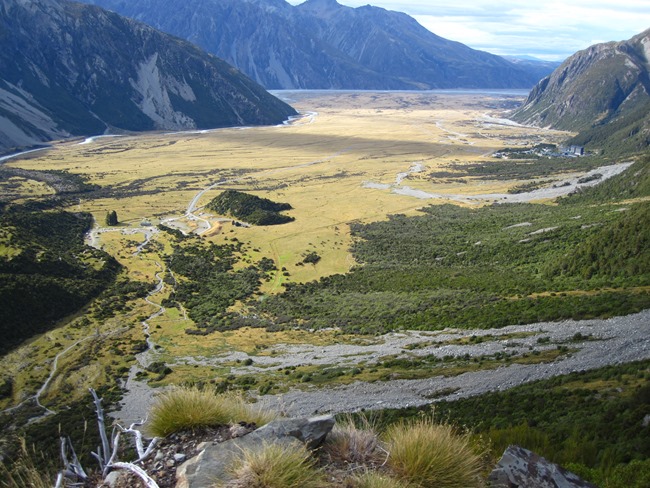 It’s hard to tell from the photos how high up we were, but we weren’t even halfway to the summit when I took these two.  About halfway up were two little mountain ponds called the Sealy Tarns, which was a great spot to stop, actually appreciate the unbelievable views, and gasp uncontrollably for breath.  We were really lucky that the weather stayed clear, and we had a fantastic view of Mt. Cook and the glacial lakes the whole way up.

Mt. Cook is the snowy peak way in the distance
After Sealy Tarns, we had to do some pretty intense bouldering, and took a lot of pictures acting like either Gollum or the mountain goats from Planet Earth. 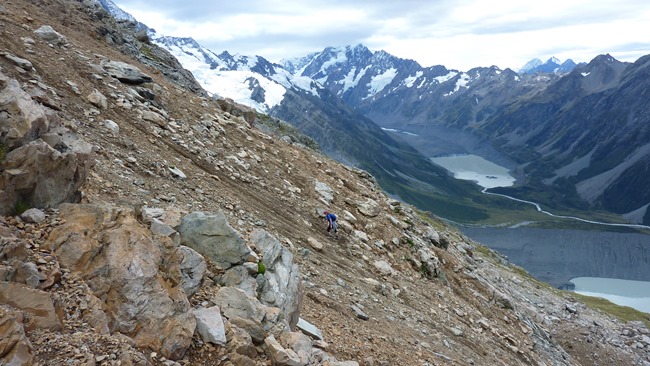 The “trail”… where’s Waldo?
Finally, we reached Mueller Hut at the top and got a much-needed lunch break and some more spectacular panoramas.  We kept hearing avalanches on the surrounding glaciers, which was really cool.  We even got to play around in the snow! 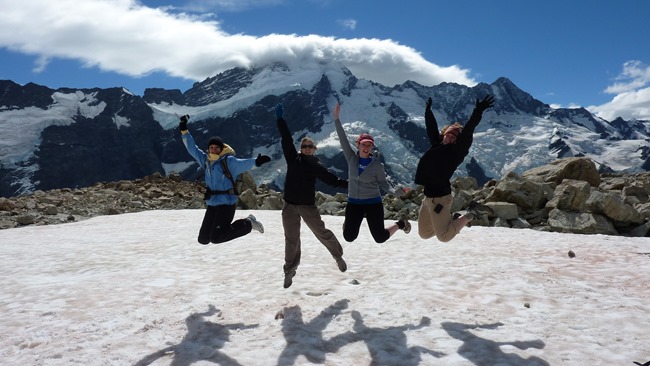 It was so hard to believe that what we were looking at was real, and that our dinky little bodies had actually gotten us up there.  It sounds totally cliché to say it made me feel small and insignificant in the universe… but, you know, I was feeling all philosophical at the time.
The descent was a lot easier through the rocky part; we could just leap around instead of climbing up and over.  But going down the giant stairs was like nothing my Geneseo calves have ever experienced!  I am not a giant; it would have been convenient if I was one.  By the time we got back to the car park, we were all exhausted and starving, but insanely happy.  The whole hike took us about eight hours, including the stop at the hut.  We had a delicious pizza dinner at a little place in Twizel before going back to the hostel, where I was quite sure I would sleep like a rock, but did NOT!  I’m not sure why, but don’t think twice, it’s alright.
On Sunday, we took our time driving back to Christchurch so we could stop and spend some more time at the lakes.  We had a postcard-worthy view of Mt. Cook across Lake Pukaki, which hardly ever happens – the peak is almost constantly covered by clouds. 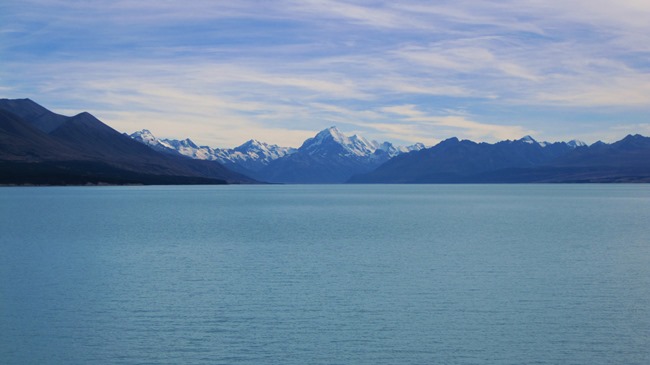 Contact my agent to purchase signed prints.
After, we waded around in Lake Tekapo (Amaury swam, and discovered that glacier-fed lakes are freezing even in the summer) and we found a poor little bunny who had gone for a swim but never made it out.  Sad, but true, and also gross.  We made a last stop at the Mount John observatory overlooking Lake Tekapo, which had great views of the unbelievably blue water… and a coffee shop!  Pure bliss. 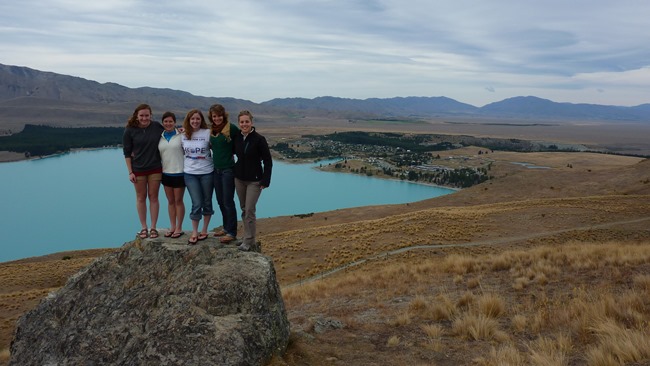 The girls with Lake Tekapo village in the background
Well, friends, I think I have told you all that the English language can convey.  You will just have to come to New Zealand and climb Mt. Ollivier with me to fully understand!  To everyone at home, happy spring, and to everyone here in Aotearoa, happy fall!  Goodbye, Kiwi summer…