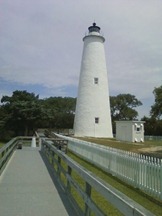 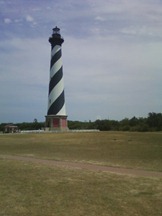 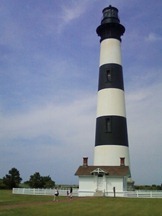 As you can tell, I didn’t do my traditional day-off post on Tuesday this week.  Why?  Because I didn’t have Tuesday off.  Instead, I had (drumroll please)… Friday AND Saturday off!  That is unheard of in the coffee shop biz, you can take my word for it.  My bosses really hooked me up this week – nepotism at it’s finest, folks.

Anyway, I decided to take advantage of my first day of freedom by doing something I’ve wanted to do for a long time – see some of the famous Outer Banks lighthouses!  There are a whole bunch of them, but there are five really well-known, traditional-style lighthouses which happen to look really cool in postcard form because they all have a different pattern.  The only one I’ve been to is the Currituck Beach Lighthouse in Corolla, which I went to two summers ago with Sara.  That one actually looks the coolest, in my opinion, because it’s unpainted red brick, which you don’t see too often.  Regardless, it’s already checked off the bucket list.  The Cape Lookout Lighthouse, the neat diamond-patterned one, is wayyyyy down south, technically not even on the Outer Banks anymore.  So that one isn’t really feasible.  But the other three?  All in a day’s work.

I decided to drive all the way down to Ocracoke first, and then make my way back throughout the day.  I got a nice early start and got on the Hatteras-Ocracoke ferry at about nine o’clock without waiting.  I spent a couple of hours exploring the village and purchasing excessive quantities of locally-made notecards, and also made a quick stop at the Island Grinds stand for some transplanted Kill Devil Coffee!  The sweet lady there made me a delicious iced mocha and asked how her technique was, although she clearly has much more experience than I do!  Then it was time to see the first lighthouse of the day: 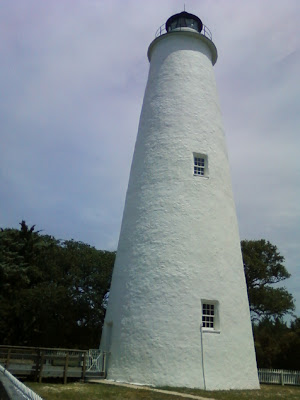 Ocracoke Light – Built in 1823 – 75 feet tall
The Ocracoke Light is very short and squat!  I would deem it the quaintest of all lighthouses.  It’s very cute.  At the time I was there, though, it was super hot and muggy out, so I didn’t dawdle too much.
Perry and I drove back onto the ferry, and were on to Hatteras! 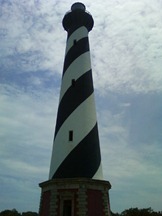 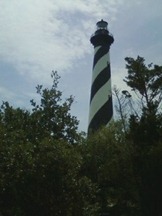 The lighthouse at Cape Hatteras is awesome because it is the tallest lighthouse in the country, and the tallest brick lighthouse in the world!  Double superlative!  This is also the only one of the three lighthouses I went to today that visitors are actually allowed to climb.  It’s a twelve-story hike up the stairs to the top… suffice it to say, I did not go for a run when I got home this evening. 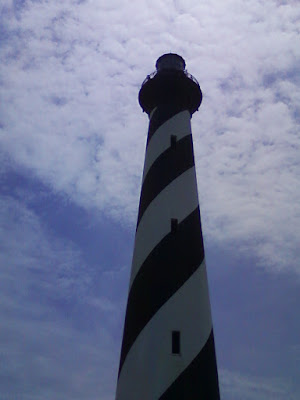 That twelve-story climb gave me enough time to make some crazy random small-world connections, though: an older man who started up the lighthouse at the same time I did was a Syracuse alumnus, and the park ranger halfway up the tower was college roommates with Katie‘s husband!  Serendipity is the theme of the week.  Anyway, the twelve-story climb was also worth it for the views from the top! 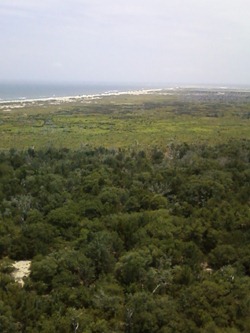 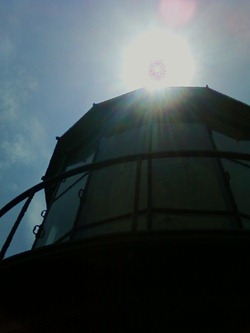 The Hatteras lighthouse had a really cool museum and gift shop, and I took some really sweet pictures of the lighthouse through the old-fashioned windows, but they did not turn out well at all since I was using my cell phone.  I really need to get a new camera.  All those guys with the fancy photographer cameras and tripods were giving me knowingly superior looks as I snapped away with my little blue cell phone.
Last stop, Bodie Island! 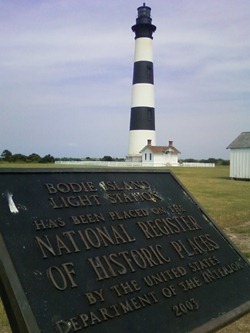 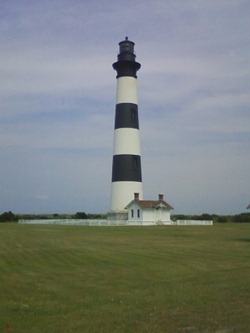 You can’t climb this one either, but that was made up for by the lovely scenic boardwalk out over the water.  It was cooling down by that point in the day, so I spent more time here than at either of the other lighthouses.  The views reminded me of the marshes in Savannah – again, no usable pictures, sorry! 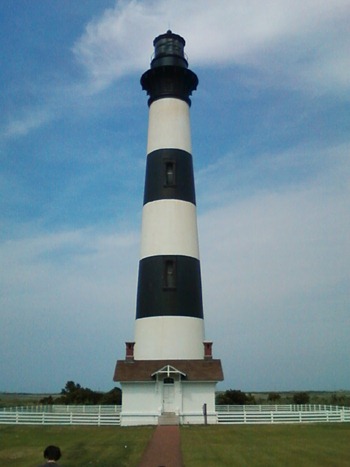 Bodie Island Light – Built in 1872 – 156 feet tall
After leaving Bodie Island, it was all I could do to keep my eyes open all the way back to KDH.  All that walking and being out in the sun really tired me out!  It was a good, comfortable kind of tired, though, made all the more enjoyable when I got home and remembered that I have another whole day ahead of me to relax and rest.  I had a good day with the lighthouses today.  Lighthouses remind me of Ahab’s Wife, which was one of the best books I’ve ever read and which in turn reminds me of many other happy memories.  I think it would be cool to live in a lighthouse.
On an unrelated note, I’ve totally revamped the blog.  Thoughts?

2 thoughts on “One Day, Three Lighthouses”