After my blog post about Mikaela’s recent visit to the Outer Banks, I had a few inquiries about “The Gump.”  Although I’ve referenced it sporadically ever since this blog began, I never really explained what it is.  So here we go: get ready for some mind-blowing stuff.  This will change the way you relax, folks.

The Actual History of the Gump

You probably know that The Wizard of Oz movie was based on a book.  But wait, there’s more!  Thirteen more, to be exact.  L. Frank Baum actually wrote fourteen books about the Land of Oz.  I have only read the first three (the first one is the book that the movie’s based on), and they’re great.  Trippy and crazy and really creative – like Alice in Wonderland-ish.

Anyway, the second book, The Marvelous Land of Oz, is the story of what happens after Dorothy leaves.  Basically, the Tin Man and the Scarecrow and friends are still stuck in the Wizard’s castle, and the citizens of the Emerald City are all in an uproar because they just found out that the Wizard was a fake.  So they devise a plan to escape.  They tie two sofas together, add giant palm branch wings, and give it the animated talking head of a deer-like animal called a Gump.

Awesome, right?  So they fly away in the Gump, successfully escaping from the crazy Emerald City-ers, and go on to have many magical adventures with a talking pumpkin and a walking sawhorse.  You should really read these books.

The Geneseo History of the Gump

During the first semester of my junior year in college, Malissa and I spent a whole lot of late nights together doing homework for our psychology classes.  Since these nights often involved quizzing each other out loud, running to Wendy’s for coffee toffee twisted Frosties, and taking breaks to watch Harry Potter movies, we thought it best to set up our study sessions in the main lounge of Wyoming Hall instead of one of our suites.

The main lounge of Wyoming Hall happened to be equipped with comfy blue very-generic-dorm-furniture couches, but we often ended up sitting on the floor because of all the papers, notes, and textbooks we had to spread out.  Then one day, one magic day, we pushed the couches together, and it was like a giant walled-in space to sit where we could spread our stuff out and  be way more comfortable than we were on the floor.  And I remembered the instance of two couches being pushed together in The Marvelous Land of Oz, and so we called this our own Gump.  Nick often joined us in Gumping (it quickly became a verb) in the main lounge, and once in a while we even invited the rest of our RA staff in as well. 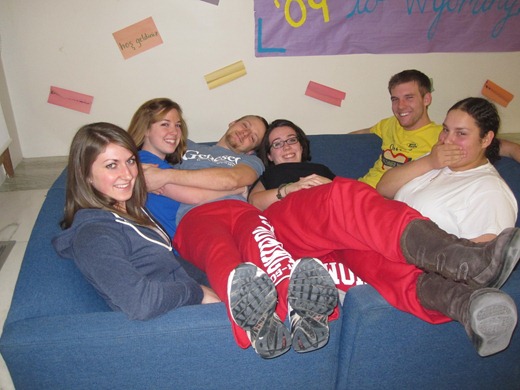 Admittedly, it was less comfortable with six people than it was with two, but you can imagine the insanely comfy study parties this thing led to.  It was with a heavy heart that I said goodbye to my staff, good ol’ Wyo, and the Gump at the end of that semester.

The New Zealand History of the Gump

When I flew halfway around the world next semester and moved into my flat in Christchurch, New Zealand, my flatmates and I quickly remarked on the weird brown comfy-yet-square couches in our living room. 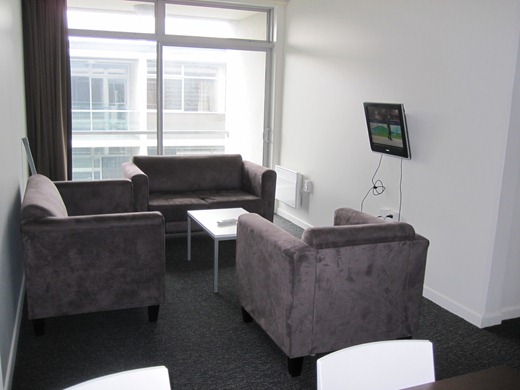 Still fresh off my semester of Gumping with my wonderful Wyo staff, I thought it seemed pretty obvious that those couches were just begging to be pushed together.

The Gump instantly became a fixture in O-119.  Seriously, we had this down to a science.  Someone could yell, “Let’s Gump!” and we’d have the couches together, the chairs set up, the tea brewing, and our movie picked out in two minutes flat.

Sometimes we enjoyed Gumping with no furnishings to distract us from the pure joy of relaxing in what was essentially an adult playpen.  Mik and Sarah display that minimalist style here: 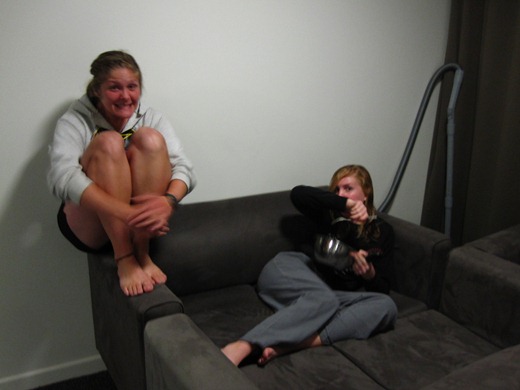 More often than not, we dragged a couple of our sweet as duvets out to the living room, stacked the kitchen chairs on top of the coffee table, precariously balanced someone’s laptop on top, and turned the Gump into the perfect spot for movie night. 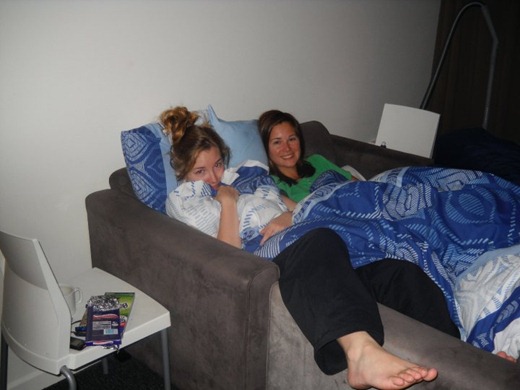 I mean, check out that expert set up.  A kitchen chair on each side to serve as a side table for tea, cell phones, and Cadbury bars.  Genius.  That was actually the night that Erika and I stayed in and Gumped while a bunch of our friends went to the spring ball.  How lame… actually, I think we had a way better time.  Evenings in the Gump usually were a way better time than anything else.  Chelsea and I had one especially epic movie night in the Gump, when the rest of our flatmates were either tramping or being sociable, that we often reflect on as one of our favorite in NZed.  Ah, good times.

And of course, on our last night in New Zealand when it was only the two of us left, Mikaela and I spent our few remaining hours in the country we’d grown to love more than anything Gumping away with our main man RDJ. 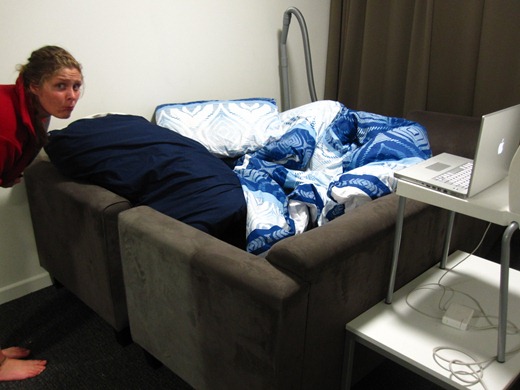 Gosh darn I really wish I’d brought that duvet cover home with me.

Anyway, there you have it: more than you could have ever possibly wanted to know about the references I make to “the Gump.”  But now you understand why it was so exciting for Mikaela to visit and for us to push my two couches together and watch Flight of the Conchords here on the OBX.  The Gump is officially global.

2 thoughts on “The History of the Gump”