Two years ago, I was living in Christchurch, New Zealand.

One year ago, Christchurch was hit with a devastating earthquake that left the city in shambles and almost 200 people dead.

Yesterday, there was an announcement made that is heartbreaking to anyone who has ever lived in or visited Chch.  The historic cathedral is coming down.

This beautiful, majestic cathedral was built in the mid-1800s and is by far the most important landmark in Christchurch.  It’s gorgeous, too.  Situated right in the middle of the modern city buildings, it’s the focal point anywhere it’s in sight.  It’s like Marilyn Monroe in a crowd full of normal people. 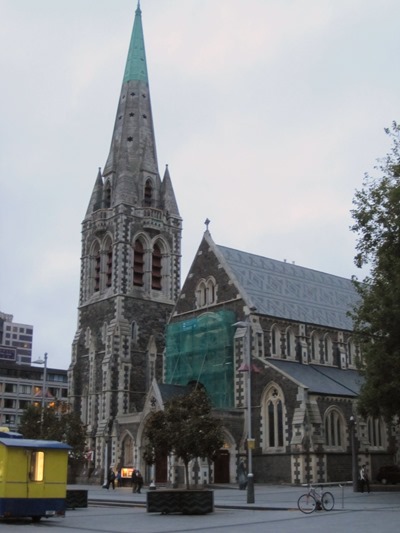 Along with other major structural damage, the steeple collapsed in the February 2011 earthquake, and rebuilding assessment and efforts have been slowly moving forward ever since.  Apparently, though, it’s been decided that the damage is just too deep and the building cannot be made sound again as is.  The current plan is to bring the remaining walls down to a height of a few feet and reconstruct the area as a prayer garden.  There’s mention of building a new cathedral in Chch at some point, but it wouldn’t be the same one or in the same place.

I can’t imagine Cathedral Square without a cathedral.  On my first weekend in New Zealand, I went with my friends Erika, Katharina, and Laurie into the city centre to visit the cathedral.  Though it was a beautiful building absolutely oozing with rich history and magnificent architecture, my photos of it often fell to the wayside when I’ve remembered my time in NZ, passed over in favor of hiking trips, rainforest waterfalls, or nights in Ilam with friends and flatmates.  However, in light of this recent news, I thought that day deserved an appreciative trip down memory lane. 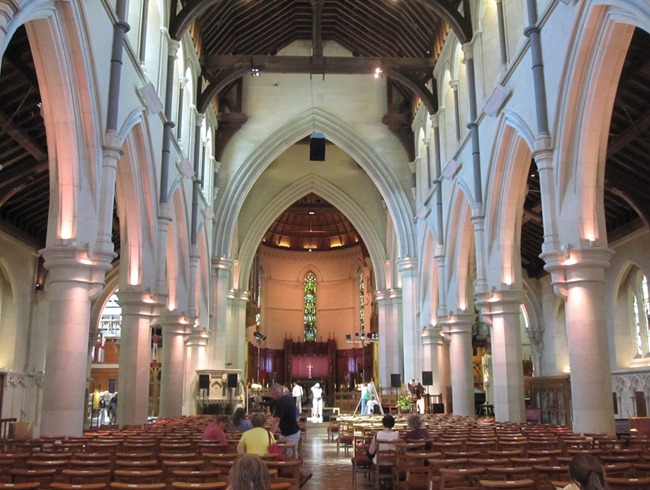 I loved how traditionally grand and majestic the cathedral was, while still seeming light and bright.  In true Kiwi fashion, visitors and parishioners alike were reverent but not silent.  It felt like a place that you were allowed to enjoy. 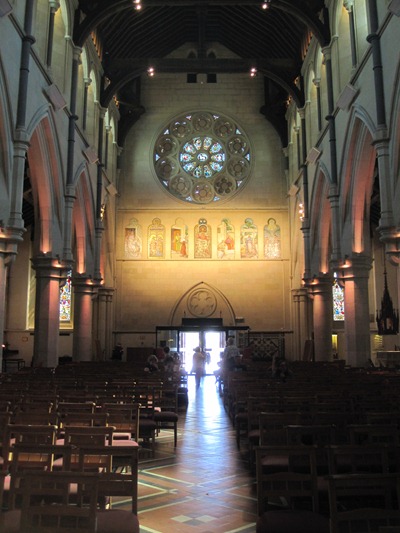 We were encouraged by the welcoming guide to look around, take photos, and ask questions.  It wasn’t like any other cathedrals I’d visited – I think someone even laughed once.  When I was at the Sacré-Coeur, we couldn’t speak at all and a scary gendarme guard nearly chopped my arm off when I reached in my pocket for my notebook because he thought I was grabbing a camera… not as enjoyable. 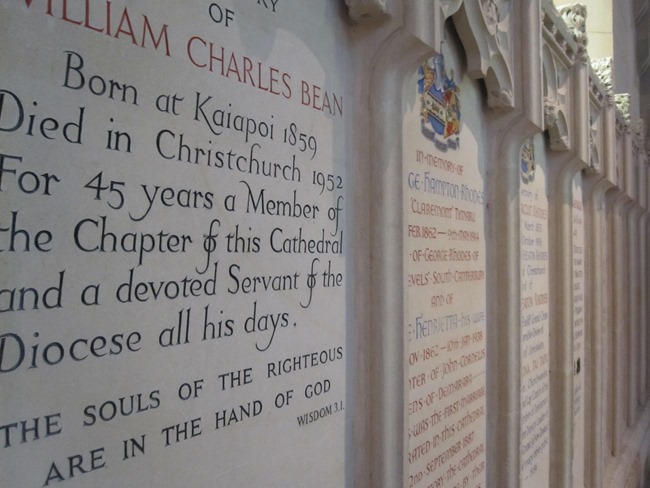 After wandering around and admiring the inside of the cathedral for a while, we headed for the building’s main attraction: the Tower Climb.  Visitors can take the winding staircase up through the cathedral’s 200-foot spire.  We were not encouraged by the fact that the entrance looked like what The Gang always found behind moving portraits in Scooby Doo.  Creepy. 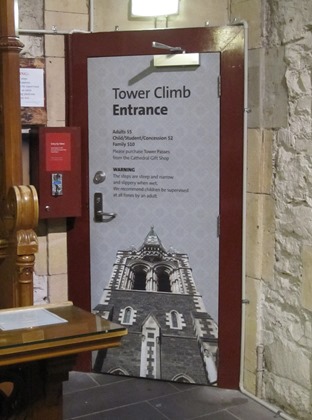 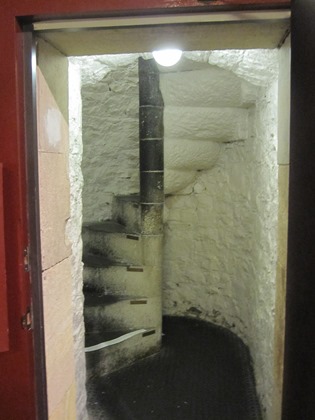 Up we went, and just a few minutes later, we were taking in the views of Cathedral Square, Christchurch city, and the Canterbury hills in the distance.  It absolutely blows my mind to think that nobody will ever be able to have this view again. 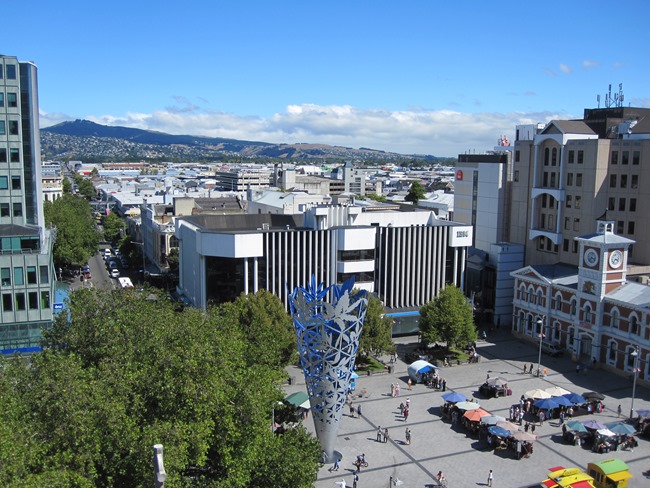 See that building on the right that kind of looks like a railway station?  Well, it used to be a post office… but now it’s a Starbucks!  That little blue and white oval-shaped cart just above all the umbrellas is this Bavarian soft-serve stand that was proclaimed to be “Dynamite!” by an old man in the square one day, and the red and yellow booth in the lower right corner has the BEST pita wraps ever.  And the peak of the hill way in the distance was where we rode the gondola up to during the Christchurch Grand Tour. 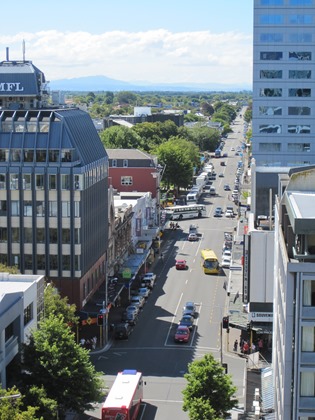 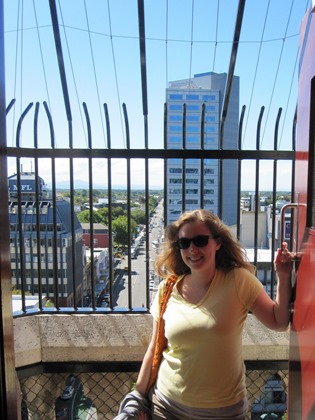 That was my very first weekend in New Zealand, so I was still in this childlike state of complete awe, acting like a kid in Willy Wonka’s factory every time I turned around.  For real, I would have nosedived into a chocolate river if there had been one available.

Even so, I can’t help wish I’d known how valuable that experience was at the time.  Countless people had visited that cathedral and climbed that tower before my friends and I did, but barely a year later, the earthquake would occur and nobody would ever have the chance again.  Okay, maybe I wouldn’t have wanted to know that.  Nevermind.

The point is, that cathedral was the heart and soul of the whole city.  It was a landmark, a big fat chunk of history, and a lovely meaningful place.  It was the backdrop for the Wizard of New Zealand to profess his views on baby-farming societies, electric cars, and the meaning of life every day in the square: 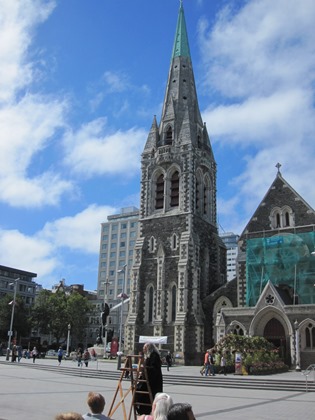 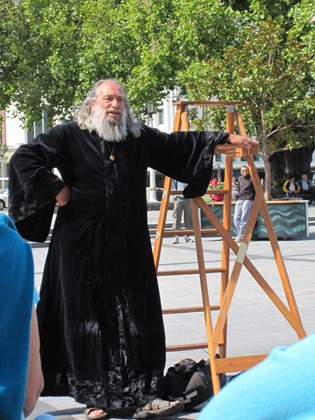 The city will miss its beautiful centerpiece, but assuredly the people of Christchurch will handle this latest sad news with grace and humor, as they do everything.  Maybe I should tell someone about my Marilyn Monroe analogy so they have time to write a Candle in the Wind parody for the cathedral.  I think the Kiwis would like that.

“Your steeple fell down long before your legend ever did…”