Happy Thursday!  I had big plans for my day off, but the wacky weather we’re having threw a bit of a wrench in the works.  In an attempt to fully complete my transformation into a southerner, Sarah’s dad was going to take me wading for oysters and trout fishing this morning, but when I woke up at 6:15, there was a crazy thunderstorm going on.  Oystering in the rain wouldn’t have mattered (you’re wet anyway), but oystering in lightning is not the best idea.

Anyway, the rain stopped a couple hours later and now it’s almost eighty degrees and there’s not a cloud in the sky!  And yet the forecast says it’s supposed to storm again soon.  Who knows.  I’ll enjoy the sun for now.  And is there any better way to enjoy a lovely afternoon than with a horrifying tale of torture at the gym?  I thought not!  Let’s carry on.

So, I was at the gym a couple days ago after my morning shift ended… a little before 1pm.  I really like going at that time because there are normally only a few other people there so we all sort of have the run of the place.  But this time, there was literally not a single other person working out.  Just me, and the nice old guy who walks around cleaning things.

I was upstairs in the cardio area trying to decide what I felt like doing, when I noticed this strange contraption that I’d never seen before over in the corner by the stationary bikes.  It sort of looked like a Segway without wheels.

Yes, like that, except that this one was black and therefore even more intense-looking.  At first I thought it was a scale, but then I got closer and I saw that it was labeled “Dr. Fuji Cyber Body Slimmer.”  I was instantly on my guard; that is a very suspicious sounding name, if you ask me.  But what the heck – I looked furtively around to make sure that nobody was there to see in case it spit me back against the wall, and I hopped on.

Okay, here’s the lowdown on Dr. Fuji’s creation.  You hold on to the handles, and those feet pads vibrate like a turbo-charged massage chair.  Maybe it’s supposed to shake the fat right off you, I’m not quite sure.  But here’s the thing: at first I just stood there thinking “This is really lame” and “I probably look completely insane right now” because it just felt sort of strange and tickley… and then all of a sudden it felt like someone was stabbing me in the rib cage with a knife!  I guess the super fast vibrations make your abs flex without you even realizing it?

It was intense, guys.  After a couple more minutes I literally couldn’t breathe in or out all the way because it hurt, so I figured that was probably a sign that I was Cyber Body Slimmed enough for the day.  My legs and abs were actually really fatigued after that, so maybe it would really work if you did nothing but stand on that thing for a few hours every day, but I do not see that commitment happening in my future.  It was probably the laziest yet most painful workout I’ve ever had.  I was slightly concerned that I had jiggled my ribs out of alignment or something.

As if I needed further proof that this is a very strange invention which probably entered my gym via the fitness equipment black market, I Googled it when I got home and came up with this little gem apparently starring Dr. Fuji himself: 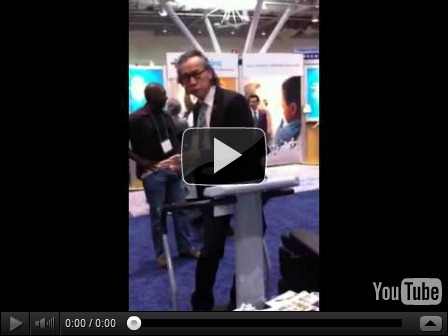 Folks, I can’t say for certain, but I am pretty sure that man is not a doctor.  Maybe the machine didn’t work for me because I was not performing the correct arms movements, as shown in the video.

I half-expected to wake up the next day unbearably sore or actually broken in half or something, but I didn’t feel anything.  So I’m now convinced that this machine just hurts you really badly while you’re using it but doesn’t give you any lasting effects.

Nonetheless, an interesting experiment.  I live to see another day!

One thought on “Dr. Fuji”