Chairs I do adore… for some reason, as I was doing this project, I kept singing about my kitchen chairs to the tune of a little old-school Jay-Z.  Why did that pop into my head?  Why not.

It all started when Maria brought over a nice blue area rug for Sarah and I because Irie had started acting like a spaz and scrabbling around on the slick floors.  For some reason, as soon as I put the rug down, I noticed how ugly our chair cushions were in a way I never had before. 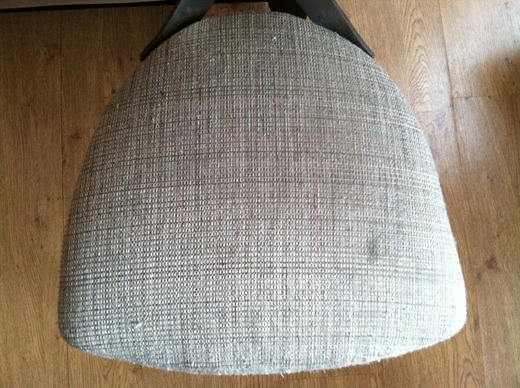 Yeah.  Ew.  Sarah and I never expected to stay in this rental house as long as we have, so we didn’t originally put a ton of thought into things like our furniture matching or even looking that great (hey, it’s functional).  However, that lovely blue rug brought to light another excellent opportunity to get the brown out.  That sounds wrong.  I just mean everything is brown in this house.

Anyway, a couple of yards of fabric from Walmart (yeah, wasn’t expecting that super-score) and a date with my staple gun led to this! Voila!  They’re not perfect, but they look pretty darn good, especially since I’ve never reupholstered rounded cushions before.  That was a little tricky, but it still only took about an hour and a half to do all four, and that was while semi-distracted by watching The Bachelor.  Here’s the full view of the before-and-after: 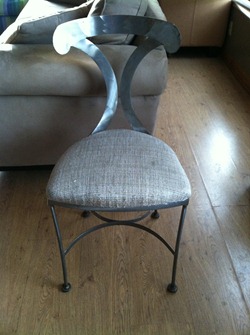 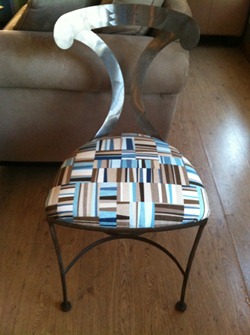 I’m super happy with them.  They add some much needed not-brown to our kitchen area and they also make our weird copper table base look really cool with the blue rug!  Y’all know how much I love a good blue and brown combo. 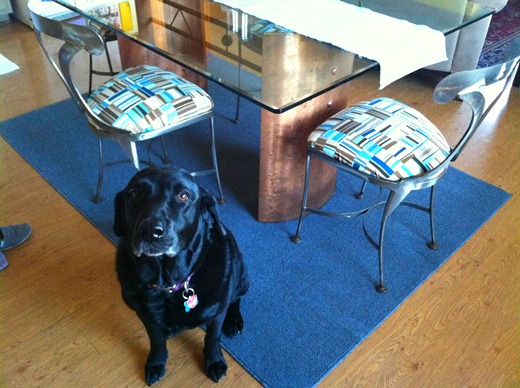 The table runner is also light blue, even though it looks blown-out and white in this photo, so it ties in nicely.  Just call me Suzy Homemaker.  And Irie loves the new rug so much that he wouldn’t allow the picture to be taken without him.

In other home updates, I spent a full afternoon scouring all the thrift stores on the Outer Banks in hopes of trading out The Tiniest Coffee Table in the World (it’s capitalized because I’m pretty sure it actually holds that title in the Guinness Book).  Aaand… success!  Found this beauty for $7.99: 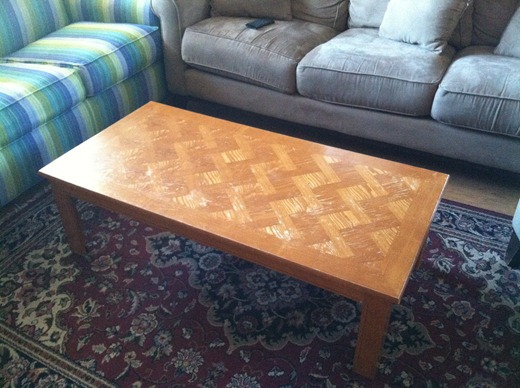 The top is a little scuffed in places but I don’t mind.  I think it’s pretty cool.  And just for a little size comparison so you can see how necessary this change-up was… 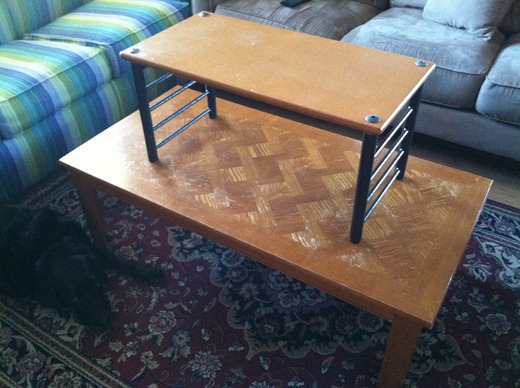 That was the old coffee table.  Tiny.  And once again, my trusty furniture model wanted to make an appearance in the lower left.

I felt very accomplished after such a successful home improvement week.  It was one of those moments of “I am sort of actually doing okay at being an adult!”  Those moments don’t just come along all the time, so I’ll take ‘em when they do.