***UPDATE: I just downloaded our official race photos, so I had to add them in here after the fact!

Hi kids!  Sorry it’s been a while – lots going on around these parts!

This past weekend, my friend and former roommate, Abby, and I left the beach behind and drove to the beautiful city of Richmond, Virginia.  We’ve been wanting to do something special and fun together before I leave for grad school, and we finally found the perfect opportunity to take part in something we’ve been talking about for a while: the Color Me Rad 5K! 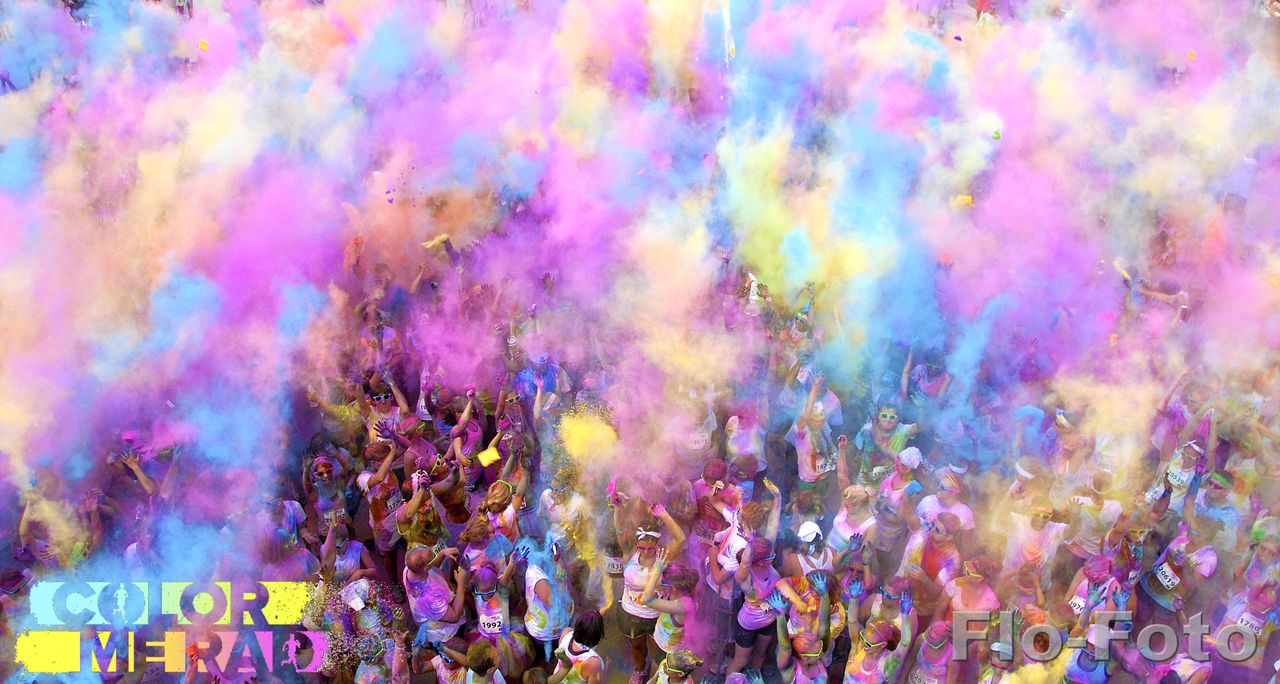 We were originally planning to do this race in Virginia Beach, since it’s much closer, but it sold out right away and we decided that it might actually be fun to go a little farther to RVA.

We drove up on Friday afternoon through a lot of wind and rain, checked in to our hotel, found some dinner, and cozied up in our hotel room just as a crazy thunderstorm broke out.  We’d made a pit stop at Target on the way for some white t-shirts and a Sharpie, and we spent the evening making some sweet as race shirts, watching ABC Family movies, and hoping the storm would clear up by morning.

Luckily, it did, and we headed out bright and early for the race sporting our new gear.  For anyone unfamiliar with color runs, you run 3.1 miles while being pelted with (totally safe, nontoxic) colored cornstarch.  Just check out our before and after shots: 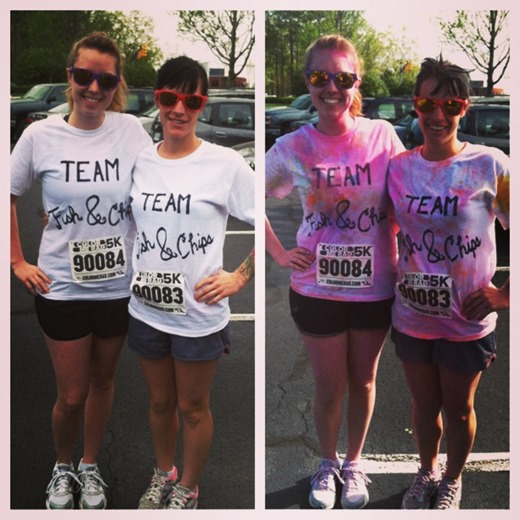 You can tell how sleepy we were before the race and how energized we were afterwards!

The race itself was great.  I almost never run with a friend (except when Katharina and I used to jog around our neighborhood in New Zealand – miss you, Granny!), but it was really fun having Abby next to me the whole time. 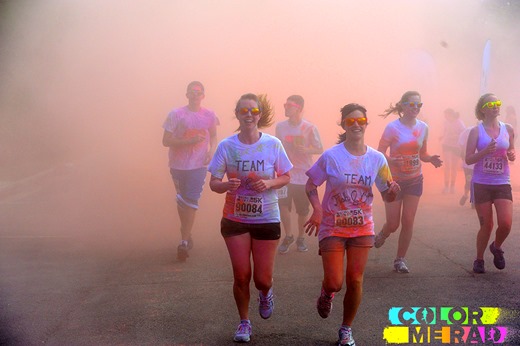 Running together definitely kept us motivated, and we both confessed afterwards that we were mentally pushing ourselves to stay together when we started tiring out.

We were pretty multicolored for most of the race, but as you can tell, we got hammered by a couple race volunteers with pink color packets right at the finish line. Check out these hilarious color bomb photos: 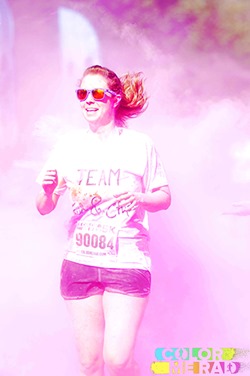 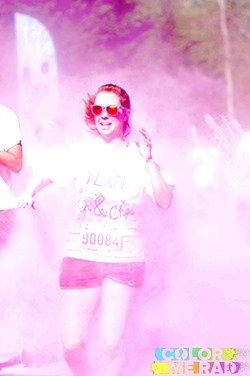 BAM.  Got me.  Four days later, I’m still Q-Tipping hot pink out of my ears.

We ended up running the entire thing without stopping and, even though the race was extremely informal and not even timed, we’re pretty sure we came in just under 30 minutes! 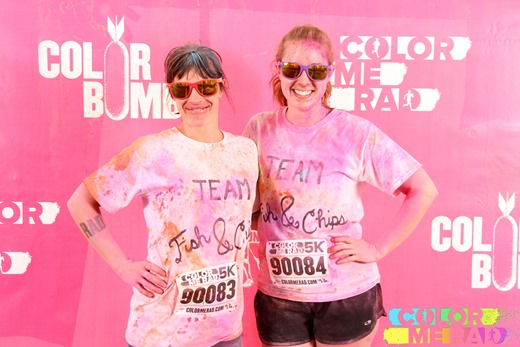 Then it was time to hit the showers.  This entailed a very amusing stop at Starbucks and walk through our hotel lobby before we reached the privacy of our room.  We kept forgetting that we looked like we’d just been paintballed relentlessly with no protective gear on, and wondering why people were giving us funny looks. 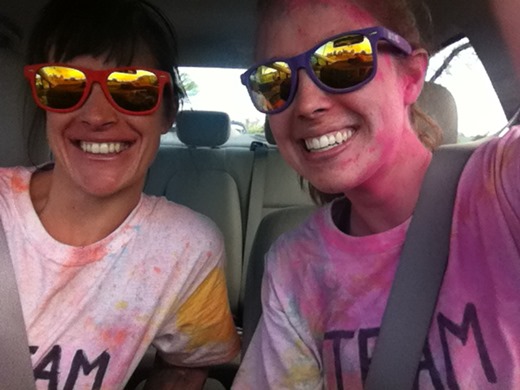 After we were fully de-colored (at least on the surface), we headed out for an afternoon of shopping at Short Pump Town Center, a huge mall just a few minutes from our hotel! 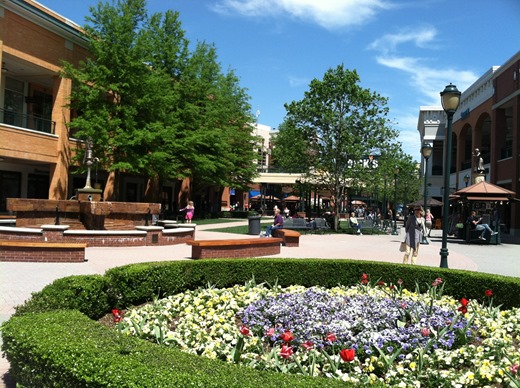 We didn’t go crazy, but mostly spent our time browsing around, enjoying the beautiful sunshine, and investing in a few well-thought-out purchases – we were rather proud of ourselves, after the fact.  Abby, who has her own baking and dessert business, bought a gigantic marble pastry slab on sale at Crate & Barrel, and the cashier said it would be no problem to have one of their employees carry it out and load it into our car for us.  The conversation with the store lady went like this:

“Just pull your car around and we’ll have it loaded up – Daniel can lift this thing with a finger!”

(turning to us again)

“Don’t laugh when you see who comes out.  Daniel really CAN lift it with a finger, but they’re sending the weenie one instead.”

So out comes this rather scrawny but perfectly nice fellow named Kevin, who did seem slightly worried at the sight of the marble slab.  He looked a bit like Captain America before he got those DNA-altering injections (I would imagine that Daniel looked a bit like Captain America AFTER the DNA-altering injections).  Nevertheless, he got the slab to the car in one piece, and we were left with another excellent story for the recordbooks.

After our colorful morning and fun-filled afternoon, it was time for a great farewell dinner at the Capital Ale House. 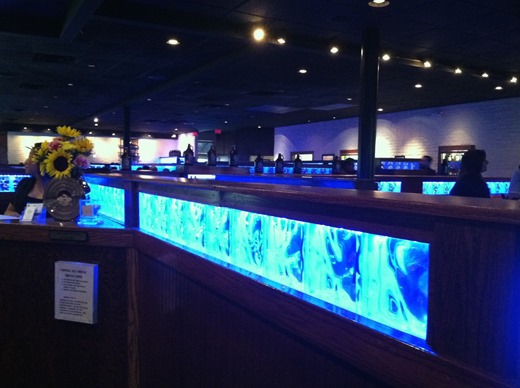 Abby and I felt we’d earned a solid meal of burgers and beer, so that’s just what we had.  The restaurant had a six-page beer list that included a ton of draft and local brews.  Dad, I wish you’d been there – you would’ve loved it!

We’d barely finished our meal before all the activity of the day started catching up with us and we couldn’t help yawning.  We decided to enjoy another early night in our comfy hotel room to soak up our last few hours of rest and relaxation.  Richmond is a really beautiful and cool area with lots to do, and this weekend made me really wish I’d spent more time there while I’ve lived on the OBX!

It was sad to say goodbye to lovely RVA and head back towards a full work week, but Abby and I both agreed that we could not have had a better weekend!  It was full of so many fun things and a lot of great friend time.  All in all, it was pretty darn rad.

Have you ever done a color run?  What’s the coolest race you’ve done or want to do?

One thought on “Color Us Rad!”