I’ve always said that Dunedin was my favorite city in New Zealand – besides, of course, my “hometown” of Christchurch.  I spent a very brief but jam-packed day there with Erika and Katharina during our roadtrip around the South Island, and I just fell in love with the place. 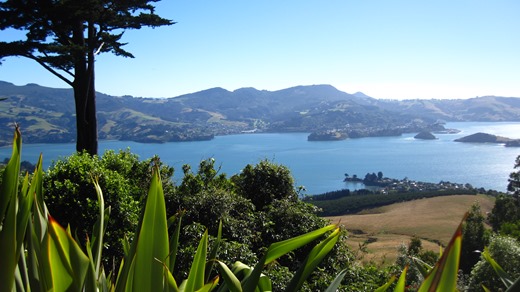 It had the energy and walkability of a big city, the beautiful rolling hills and bay views of a little seaside town, and a ton of fun and interesting things to do (Cadbury chocolate factory, penguin reserves, and Larnach Castle, to name a few!).  In short, I found it frolic-inducing: 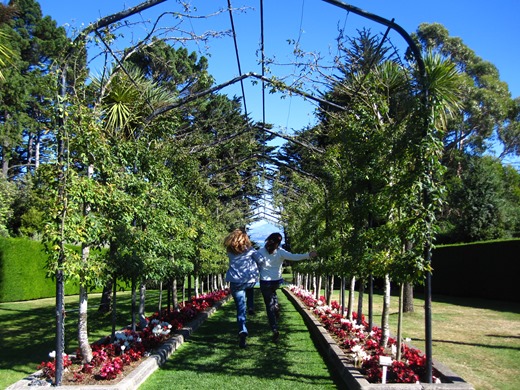 Such was my infatuation with Dunedin that I very much regretted the fact that we’d only penciled in 24 hours there, and I was determined to spend some more time there before the semester ended.  Fortunately, I had the chance when my flatmate, Chelsea, and I decided to go see the All Blacks (NZ’s national rugby team) play during our very last weekend in New Zealand!  Since I had so little time left there, I only blogged about that weekend in bullet points, but it stands out in my memory as one of the best weekends of the semester, so I thought it deserved a second look.

We got cheap bus tickets and hopped on for the five-hour drive.  The bus was super comfy and we spent most of the time dozing off or listening to each other’s music – Chels, this was the trip where I introduced you to Waltz #2!  Remember that?  Anyway, we finally arrived and were dropped off at the historic railway station in Dunedin. 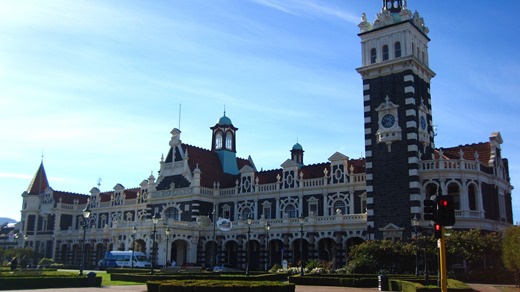 We legged it through the city and checked in at Chalet Backpacker’s, the same hostel that Erika, Katharina, and I had stayed at during our roadtrip.  I LOVED this hostel!  It used to be an old hospital and was just such a cool place.  It was also situated right at the top of High Street with an incredible view of the city and bay. 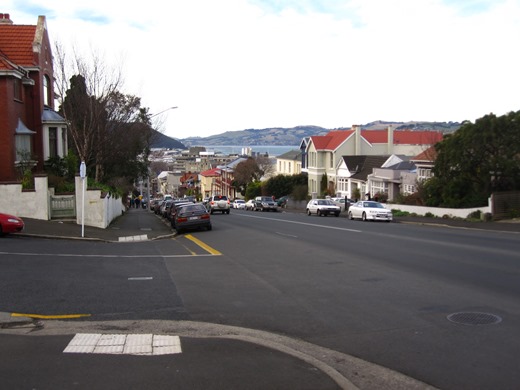 Chelsea and I spent our first afternoon in Dunedin walking around the downtown area, popping in and out of cafes, and visiting the Dunedin Public Art Gallery.  We headed back to our hostel relatively early and relaxed in the common room with mugs of tea and some 90s movie that was on TV – I think it was Clueless or something. 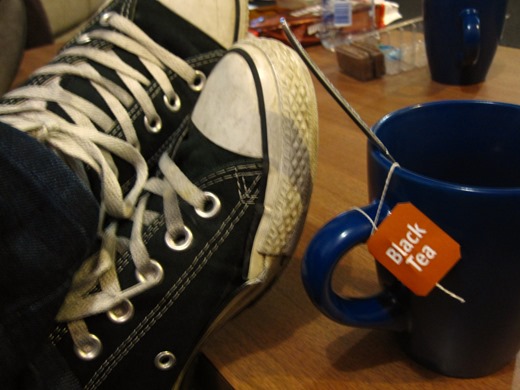 Oh, and we were Tim Tam Slamming!  Yikes.  That package of Tim Tams in the background is nearly empty.  Apparently we were hitting them hard.  This photo also contains foreshadowing in the form of my shoes (or maybe Chelsea’s… I’m not sure whose feet those are).  We both tried really hard to pack light and only brought a backpack for the whole weekend.  This was a great idea.  We also both wore Chucks and didn’t bring any other shoes.  This was a terrible idea.

The next day, we met up with some other University of Canterbury friends who were in town for the rugby match (Matt, Caroline, and our flatmate, Laurie) and all went to Tunnel Beach together. 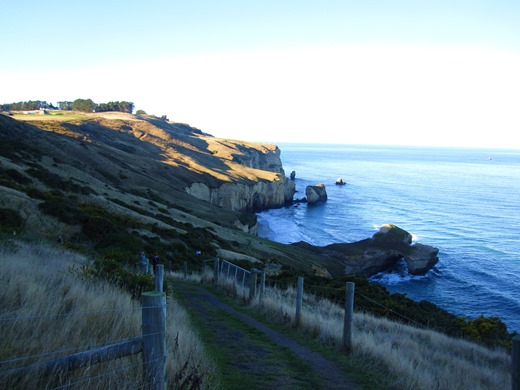 This is where the footwear problems began.  For anyone who has ever worn Converse, you will know that they are crazy comfortable provided you are sitting down or walking slowly for less than 20 minutes (which apparently was all I’d done in them – they were pretty much my kick-around go-to-class sneakers).  However, for hikes or strenuous walking, they are MISERABLE.  Bad move, Julie and Chelsea.  Luckily, we sort of forgot that our feet were starting to hurt when we got to the beach’s namesake tunnel: 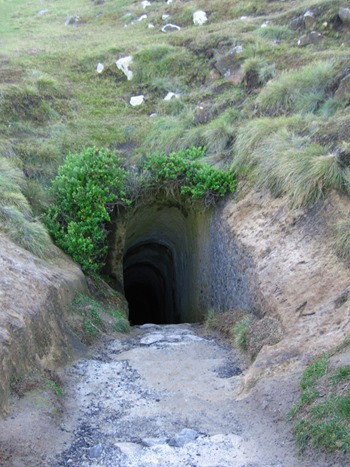 and emerged onto the beautiful, isolated beach! 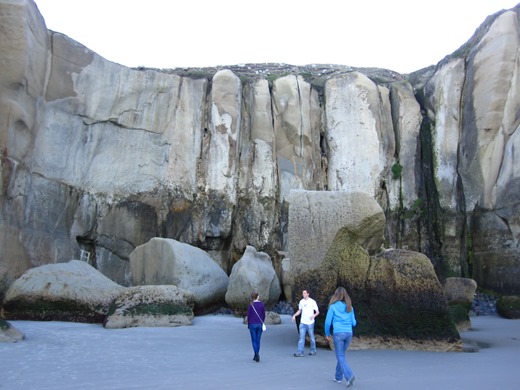 We frolicked about – I told you Dunedin was frolic-inducing! – and even practiced our best haka moves in preparation for the match that night (the haka is the pretty fearsome Maori war dance that the All Blacks open every game with). 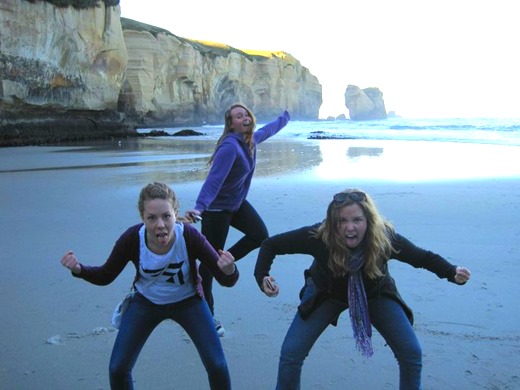 Moving on to the main event.  After a quick change at our hostel, Chelsea and I grabbed dinner at Velvet Burger downtown, which is the most amazing burger joint I have ever been to, and began the two-mile trek (yup, we decided to walk) to Carisbrook Stadium.  If you’re looking for an update on the footsies situation, they were in extreme pain by this point.  Because of this, Chels and I were already predisposed to be a little cranky, so we were not pleased when we were just walking along and, in about five seconds flat, were engulfed by a spirit mob from out of nowhere.  We tried to escape and couldn’t.  Seriously, they would not let us out.  Then some guy handed us All Blacks flags and we gave up and realized it was sort of fun. 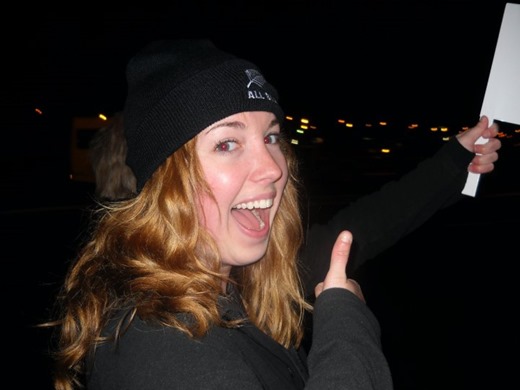 The crowd was huge and everyone was happy and excited – there were even a couple of bagpipers!  Which leads me to possibly the most epic event that I witnessed during my entire semester in New Zealand. 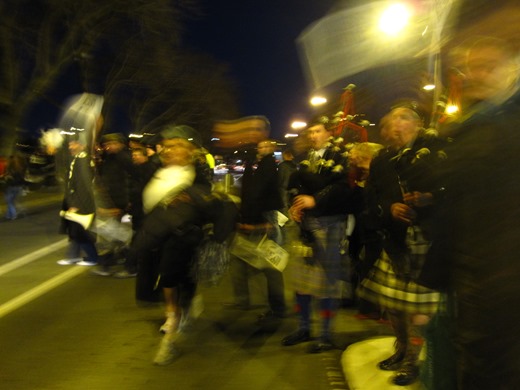 I know the photo’s blurry, but it captures the feeling of the mob.  See the bagpiper towards the right side of the frame?  We were all carrying along on our merry way, chanting and skipping, and all of a sudden the bagpipe music stopped very abruptly.  They had been walking just behind us, so Chelsea and I turned right around, and realized that THAT BAGPIPER HAD FALLEN DOWN.  He wasn’t hurt, honest, so it’s okay to laugh.  He just sort of stumbled to his knees.  If you’ve never been present when a bagpiper falls down in the middle of a tune, trust me: it is the funniest thing you will ever see.  In fact, it may have set the level of hilarity by which I judge all funny things for the rest of my life.

He popped back up, carried on with his piping… and a few minutes later, HE FELL DOWN AGAIN!  This time, he seemed a little embarrassed and felt he had to offer some sort of explanation for this repeated behavior, so he said, “These darn slippery shoes!” and walked rather more carefully the rest of the way to the stadium. 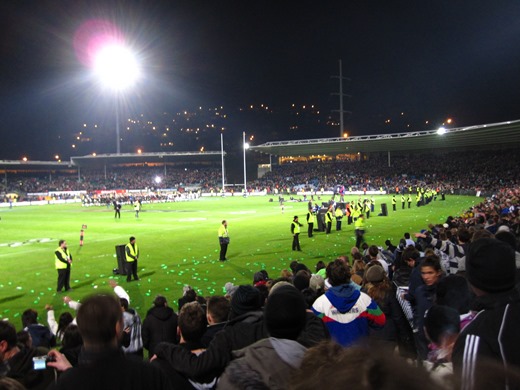 (How cool are the lights of the city on the hill in the background?!)

The stadium was packed to the gills.  Kiwis love their rugby, and this was also the very last match ever played at Carisbrook (the brand new stadium was opening later that month), so it was a big night.

The All Blacks match was SO much fun to watch, especially since NZed absolutely smashed Wales!  All the Kiwi fans in the stadium started throwing their beer bottles in the air in celebration (you can see them all over the field in the photo… thank goodness they were plastic!), which was hysterical.  When the game started, we noticed two girls behind us wearing what looked like hooded plastic painter’s suits, which we thought was super weird… but when we got showered with the last drops of a hundred people’s Steinlagers at the close of the game, we wished we’d thought to bring protective gear.  Ah well, all part of the experience. 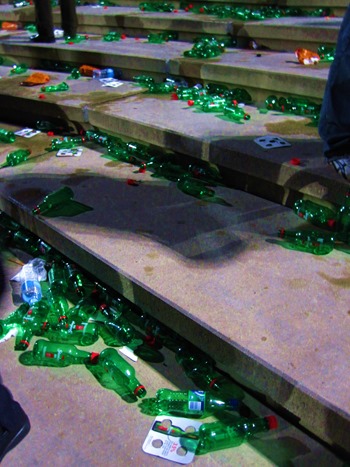 Good thing the Kiwis are big into recycling!

Chelsea and I joined the post-rugby festivities in town for the rest of the evening before heading back to our hostel and falling asleep instantly.  The next morning was gray and rainy, but we woke early and spent a few hours in a café with a roaring fireplace, drinking lattes and writing in our journals. 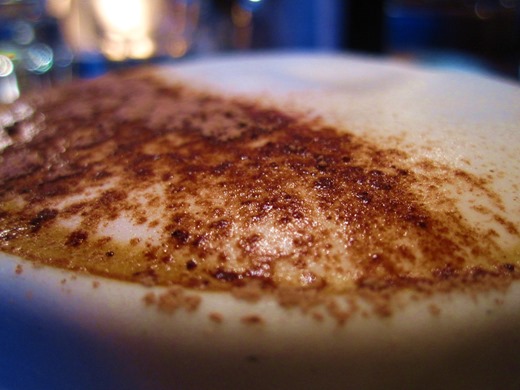 After that, it was time to hop on the bus and head back north for our last six days in Christchurch.  Chch will always be my home there, but Dunedin is a favorite visit, and this weekend didn’t disappoint.  I had the most delicious burger I will probably ever eat.  Chelsea and I got asked if we were twins, our only real goal for the trip (I know, we really don’t look like it.  It’s amazing what wearing matching outfits will do for you.). 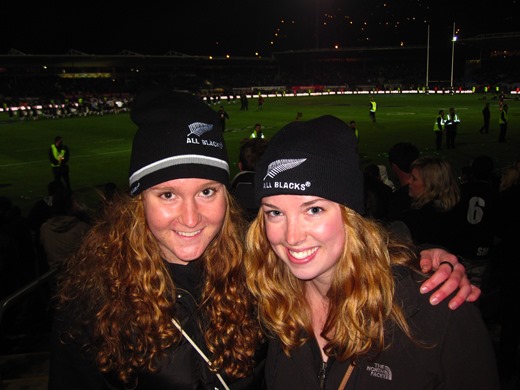 Last but most certainly not least, we saw a bagpiper fall down.  Twice.