We made it!  In a rather untraditional fashion… 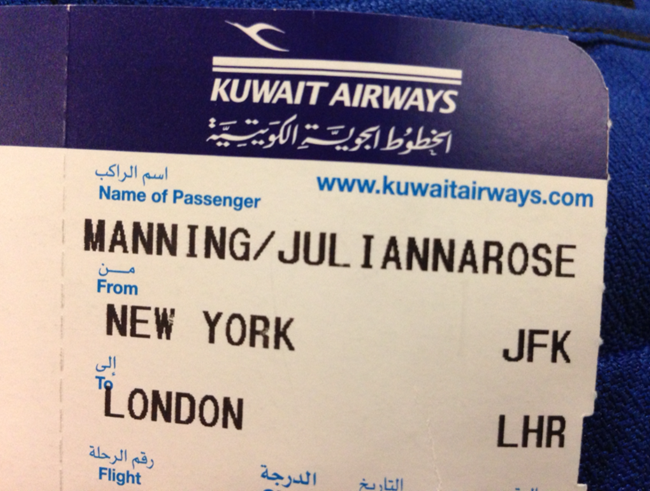 … but we made it.  Yep, Amity and I hopped the pond on Kuwait Airways.  There’s a bit of a backstory, but that’s where it ended up.  We took a redeye from JFK to Heathrow, so we’d hoped we might be able to sleep for a good part of the flight, but that didn’t end up happening.

At least we had lots of good reading material to keep us entertained: 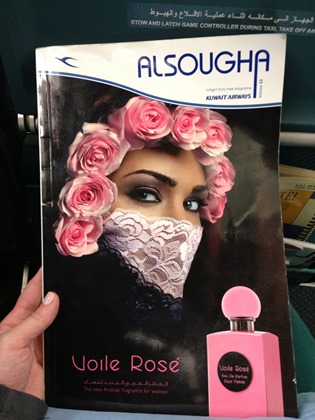 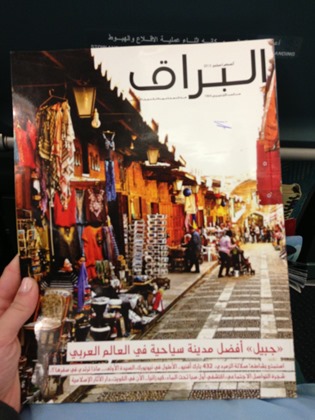 I mostly looked at the pictures.  Anyway, the flight was kind of bizarre.  We couldn’t figure out the individual entertainment systems (and hardly anybody else could, either), so we couldn’t watch movies or anything.  They also served dinner at 1am our time, and then breakfast at 4:30am, so we didn’t sleep for too long at a time either.  Despite all that, it was over before we knew it, and we landed in London a little before noon local time.

Am and I caught a cab with a lovely and helpful taxi driver named Bradley James Copping (yup, for real), who dropped us off at our hostel in Bayswater.  We were a bit early for check in, but luckily we were able to store our luggage there, so we ditched that and went to walk around the city.  We really didn’t know where we were, but we just kept walking and turning as we felt like it, until we realized we were hungry and happened upon Toms. 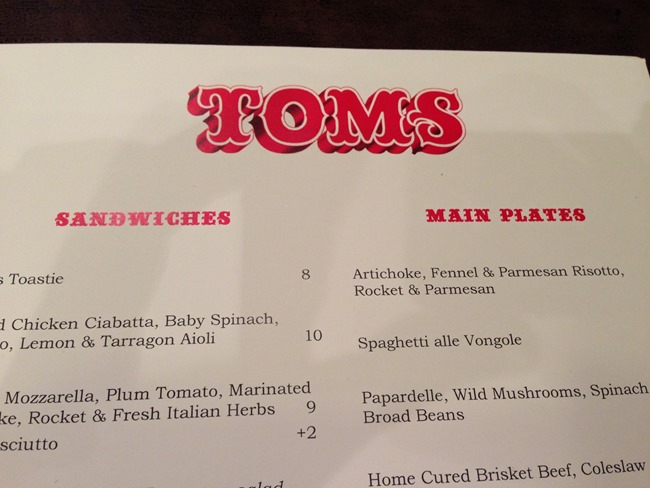 Toms is a cute little diner in Notting Hill, and it was most exciting because I’d actually heard of it before!  I’ve made a note of a handful of places in London that I’ve seen in articles or online, and I actually remembered this one, so it was fun to stumble upon it like this.  We had a tasty brunch, as well as some much needed coffee and tea.  Okay, Amity had tea and I had coffee.  I quite like tea, really, and I’m sure I’ll start drinking it more and more as I’m here, but I was tired and my American caffeine dependency has not faded yet. 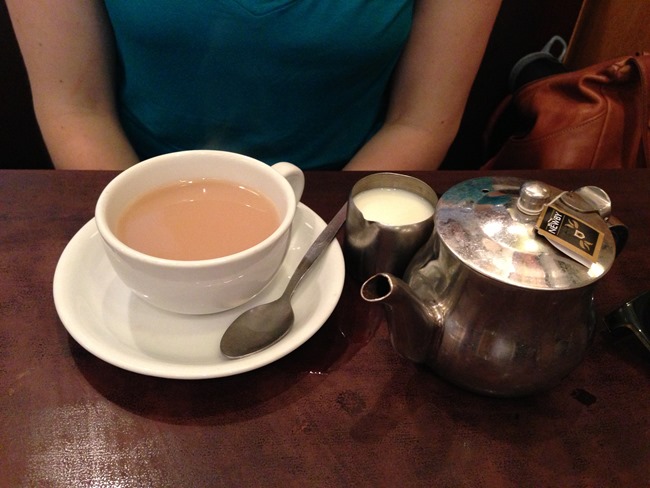 After we left Toms, we walked up Notting Hill Gate (the neighborhood’s big main road – although I had no idea that’s what it was called or where we were at the time) and into Kensington Gardens.

At this point it was 2 or 3pm local time, but we were starting to feel really jet lagged and Twilight Zone-ish, like we had no idea what time of day it was supposed to be.  So we decided that a little rest in the shade by the pond was a good idea. 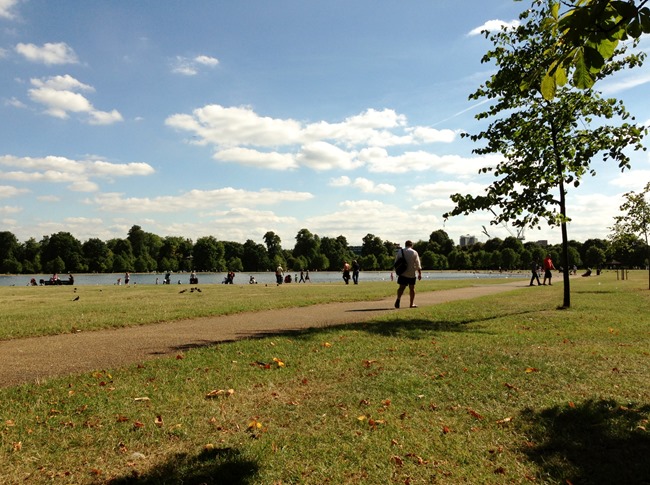 We sat and people-watched for a while (I’m getting used to it already, but at that point I still found it HILARIOUS to hear tiny children speaking with British accents, so that was fun), and then kept walking.

The park is very beautiful and expansive.  How expansive, you ask?  I’ll tell you, because I didn’t know, so I looked it up.  Kensington Gardens and Hyde Park together (they’re two halves of a big square park area) are roughly three-quarters the size of Central Park in NYC… so pretty big.  We didn’t cross into Hyde Park that day, though, so walking around the whole perimeter of Kensington Gardens was manageable. 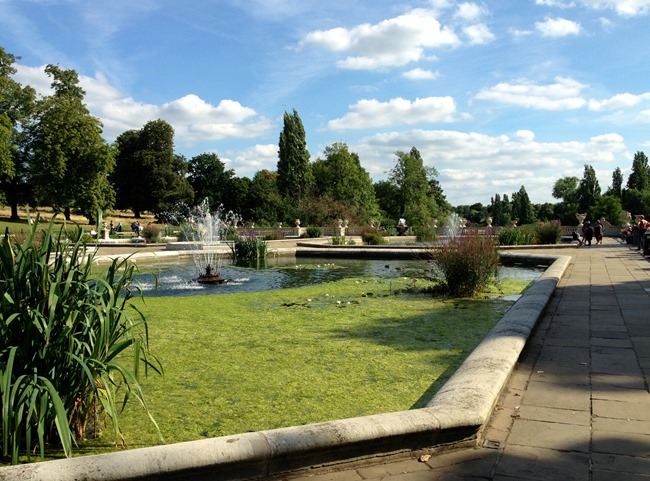 How’s that for duckweed, Dad?

We meandered along the different walkways and paths and Amity pointed out some of the things she’d seen during her brief visit to London a couple of years ago.  At one point we passed this bench, and I loved this sign on it: 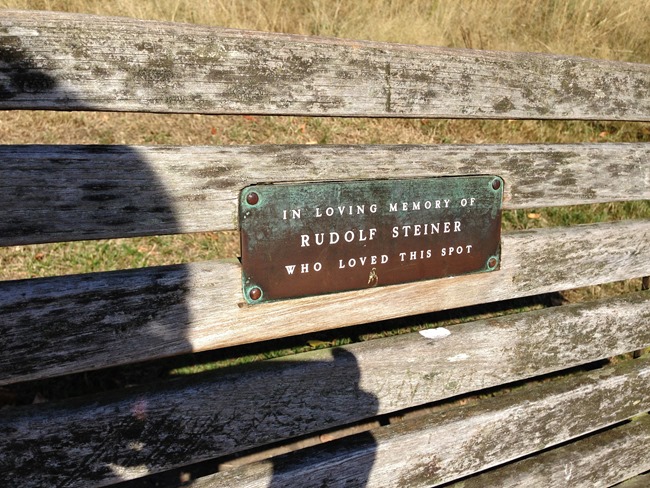 I thought that was so lovely, and I liked to think of old Rudolf sitting there for however many years, looking at the little stream across from it.  I also started thinking about where my “spot” would be, if I had a sign like this.  I think it’d be either the deck at Lake George, or Nugget Point in New Zealand, or the gazebo in Geneseo, or the Hayman Street sound access on the Outer Banks.  That’s as much as I can narrow it down, but hopefully my sign-maker will be okay with making me four little placards.  He’s pretty accommodating.

Where would your spot be?

Immediately following that bit of whimsical musing about Rudolf Steiner, I bent down to pick a sprig of something that I really thought was mint but which turned out to be a mint-lookalike with invisible needle hairs all over it.  So that was weird, and my fingers stung for a while, and then felt like they were asleep for the rest of the day.  Moving on.

We passed The Arch, a giant sculpture by Henry Moore that acts as a perfect viewfinder across the park to Kensington Palace.  The palace is right in the center of The Arch in the photo, although it’s hard to see because it’s so far away and the sun was pretty bright. 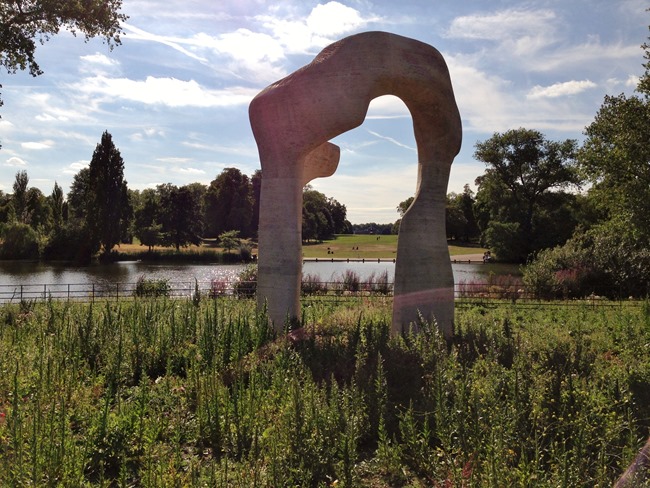 We wandered on to the Albert Memorial, which I just loved.  It was so grand and intricate and just oozed the kind of history and art that we don’t have in America… although they DO pay us tribute by adorning a corner of the memorial with the mighty buffalo.  Sweet. 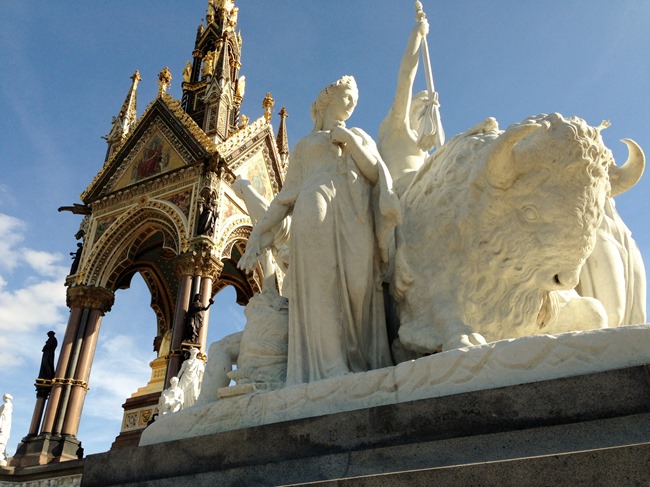 So then, we decided we’d actually have a look at Kensington Palace, although we’d save the full tour for another day – you have to pay for that and we were much too delirious to fully appreciate it at that point.  Anyway, I’m always on the lookout for a royal baby sighting (like the rest of the country, I suppose).  But they’re not even in London right now.  Not that I know. 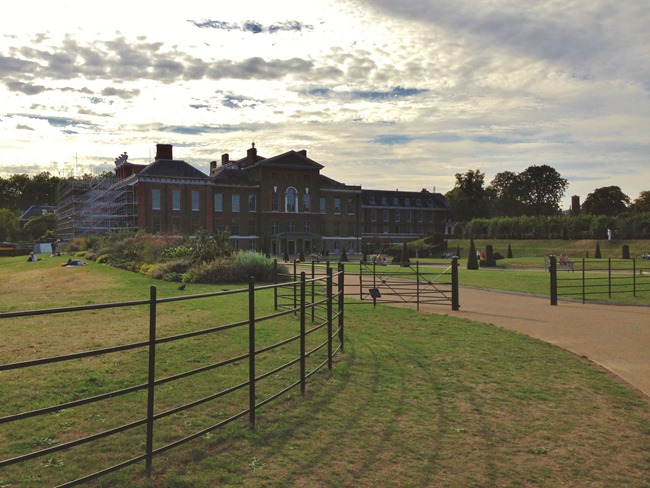 … but then they went away again! 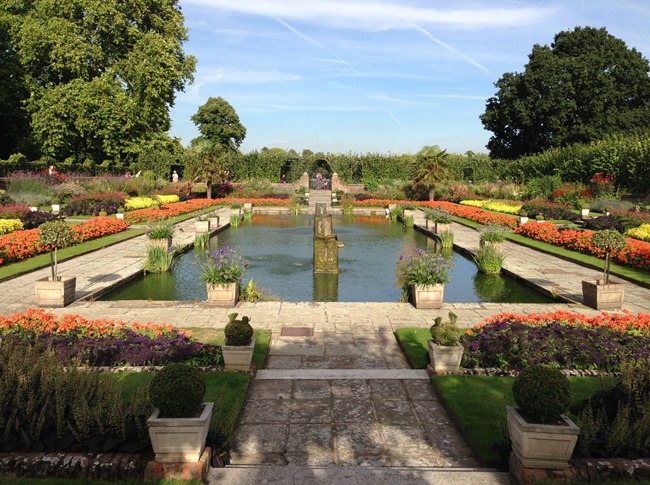 Those are the actual palace gardens.  They were so, so pretty, and a very cool mix of English countryside and tropical gardens.  As a sidenote, please be prepared because for the next year, I’m going to compare every grand garden landscape I encounter to Pemberley.  It’s going to happen; there’s no way around it.  Sorry.

So after that enjoyable jaunt around Kensington Gardens, our day started heading slightly downhill.  We didn’t want to go back to the hostel, because it was a bit small and crowded and there just wouldn’t be anything to do there, so we thought it was best if we kept walking to tire ourselves out.  We really were just so tired, though.  We were also rapidly developing blisters (Amity) and crankiness due to hunger (me).

Luckily, the light of fortune shone upon us in the form of Le Pain Quotidien and its incredible summer specials.  Ladies and gentlemen, behold the dinner by which I shall judge all dinners forevermore: 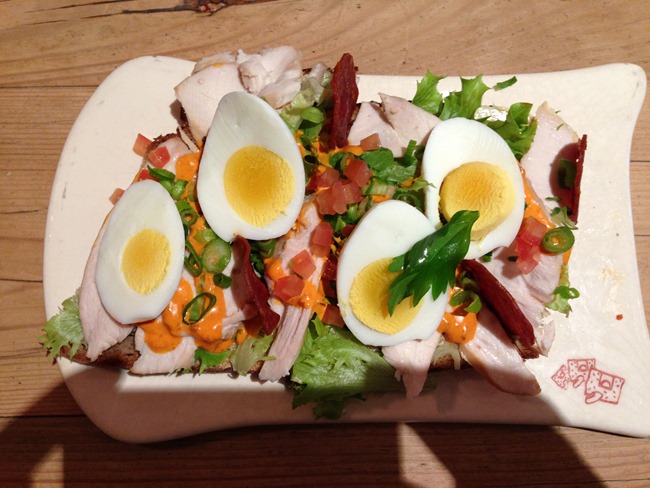 It was called a tartine, and it was fabulous.  It had roast chicken and mixed greens and chopped tomatoes and green onions and boiled eggs and crispy prosciutto and whatever the heck that amazing orange sauce was.  It just came at the absolute perfect time and I can’t remember really appreciating a meal more.  The café was also really nice and comfortable and gave us a place to sit and rest our feet for a while.

An excellent dinner did a whole lot for the crankiness, but unfortunately had no effect at all on the blisters, so the half-hour walk back to the hostel was unfortunately marred in that way.  I think we got back a bit before 9pm, showered, and crashed into bed.

The next morning, we were up, out, and on to our flat!  Photos coming… as soon as I take them.

Leave a Reply to Julie @ A Life Exotic Cancel reply