Okay, I wasn’t exactly channeling Nemo on Monday, because it was actually the start of a full week of registration and orientation activities, but it was still exciting to have something concrete to pencil into my planner!

Monday started with an informative presentation about the details of student loans from a very funny fees office dude named Glenn.  He was perfectly witty and British.  That’s about all that can be said about that.

After that, I had some time to kill so I wandered around Lincoln’s Inn Fields, at the top of the LSE campus. 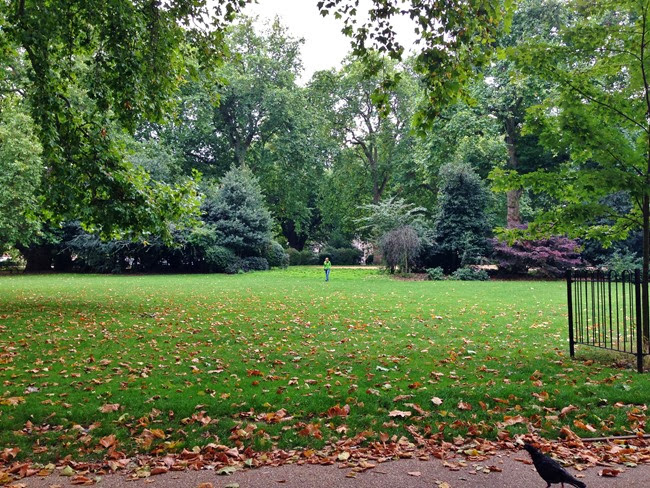 The Fields are actually more like a park with a lot of open meadow spaces, a little café in the center, and some tennis courts on the edge.  There are also some more jungley parts in the middle with paths running through them.  It’s easy to forget you’re in the heart of London! 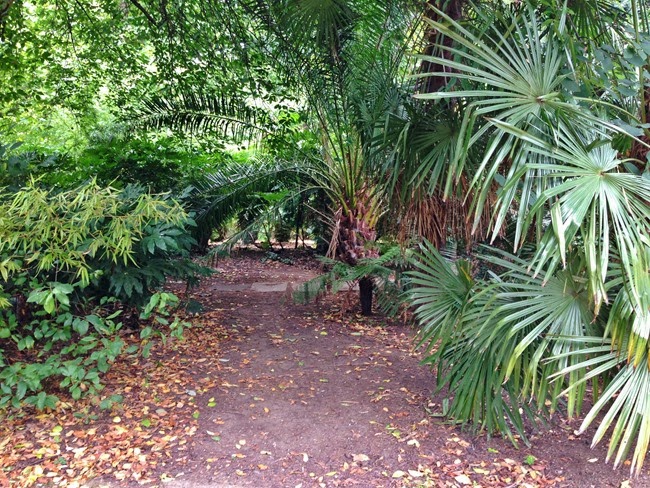 My favorite parts are the edges of Lincoln’s Inn Fields.  There’s something that excites me about seeing the sprawling, old trees contrasted with the big urban city behind them.  I don’t really identify myself as strictly a “city person” or a “country person” – I honestly love them both, so the seamless blend of greenery and metropolis suits me perfectly!

Plus, most of the buildings in London are so interesting and lovely that I don’t find them to be an eyesore.  I like gazing up at them and imagining what it would be like to live in one of the pretty little flats at the top. 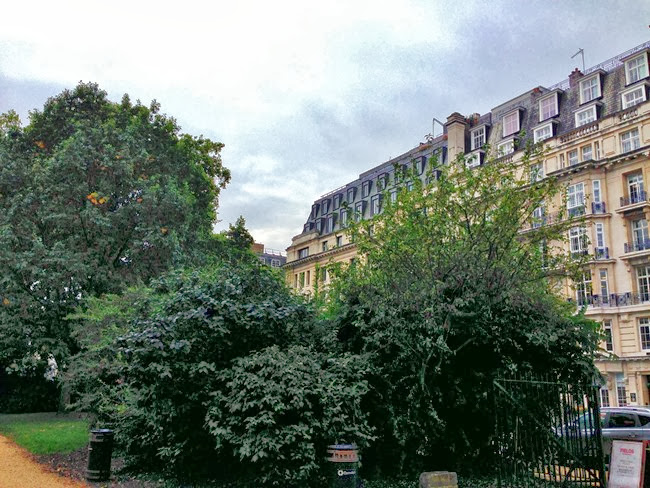 This next photo reminded me so much of the classic animated Disney version of 101 Dalmations… especially because people were walking their dogs.  I think it looks like the park where Roger and Anita first meet while they’re walking Pongo and Perdy at the very beginning of the movie. 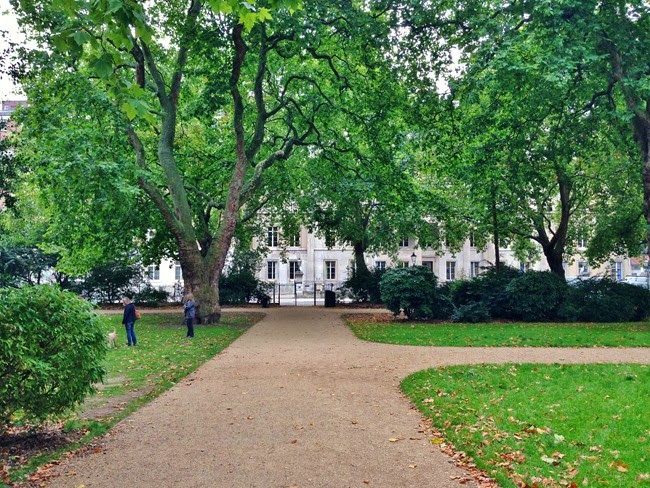 After wandering around for a while, I went to meet some other members of my degree program for lunch at a little bakery on the corner of the park.  There were at least twenty of us who showed up and it was nice to establish some familiar faces with all the different events we have coming up this week.  I got to chat the most with a few people sitting right near me and it was so interesting to discover the different origins and backgrounds of everybody in the program.  I spent the most time talking to a girl from Australia and a guy from the Netherlands.

We all went from lunch straight to our general registration, which was basically a quick photocopy of our passports and took about five minutes.

The next day, we picked up again in the morning with a welcome presentation from the dean of graduate studies.  He was very funny, played Supertramp and Led Zeppelin to “fix” certain information in our minds, and assured us that the sun does shine in London… specifically, it will shine while we have our exams and while we’re writing our dissertations.

After that I attended an informal orientation, again just with the other members of my specific master’s program.  Everyone was there for this, about 40 of us all together… and I’m the only American.  I think that will make for a really interesting year and is exactly one of the reasons I was interested in LSE.  It has a reputation for being extremely international and I think that can be a learning experience in itself (nerd).  It also made me very popular during get-to-know-you bingo, because one of the squares to check off was “born in the USA.”  As a sidenote, I’m not trying to be an Eeyore, but do we ever outgrow having to play those games when we meet a new group of people?  I’m just not a fan.

I was in serious need of sustenance after this, so one of the girls in my program and I (yes!  I made a friend!) went to find a good spot for lunch.  We were walking through the center of campus when we noticed that people all around us were eating from paper plates heaped with hot food.  It somehow had the look of being FREE food about it, so we decided to investigate further.  We got in the queue, which moved very quickly, and soon found ourselves in front of a man with a tiny food cart who was doling out Indian food.  A guy next to us in line told us that he’s there every day, giving free lunch.  Is this real life?!  This could be a great asset to me as a poor graduate student in a very expensive city.  We’re still not really sure what was going on (the man didn’t actually speak at all), but I am not one to question a free lunch.

We were going to head back to the tube station after this, but took a quick trip up and through the Old Building just to see a bit more of our campus.  We climbed the stairs and came out on to the fourth floor roof terrace, a popular lunch spot because there’s a restaurant right indoors.  It had a great view of the main street through campus below, where the freshers fair was going on. 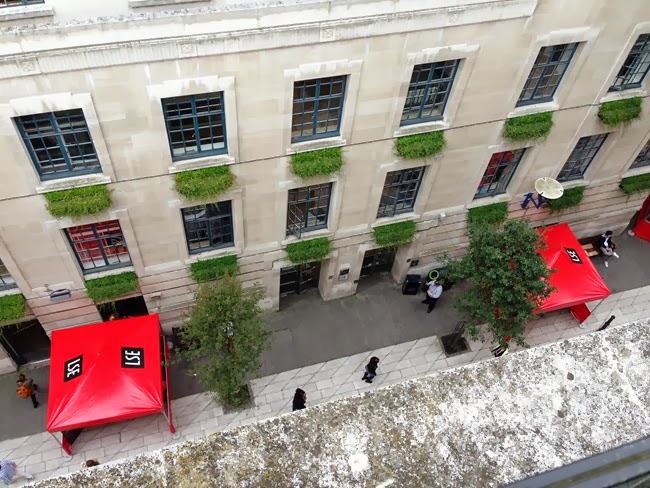 The Old Building also has one of LSE’s many walkways between academic buildings, which I think are so cool! 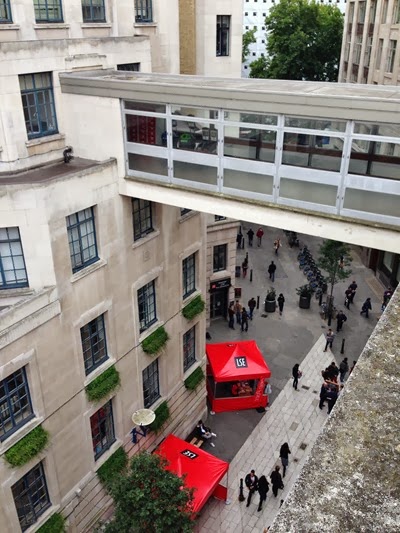 We kept heading upwards and stopped on the sixth floor.  We discovered the library of the anthropology department, which is small and private and looks like it could be a very well-kept secret if you’re looking for a quiet study spot!  I will have to keep that in mind.

We also poked our heads in to Shaw Library, which looks like it could be Mr. Darcy’s study at Pemberley. 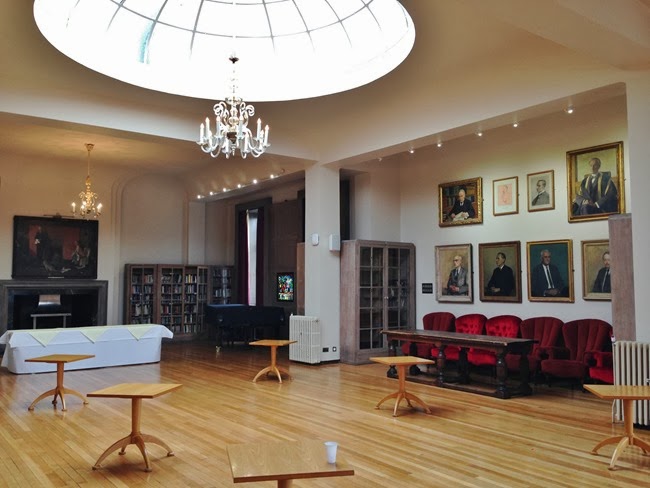 That cool old wooden table towards the right is where Mr. Darcy would sit and write letters of business (how odious, I presume).  It also has TWO baby grand pianos (although, being a library, I can’t imagine you’re allowed to play them often), and is replete with squashy armchairs. 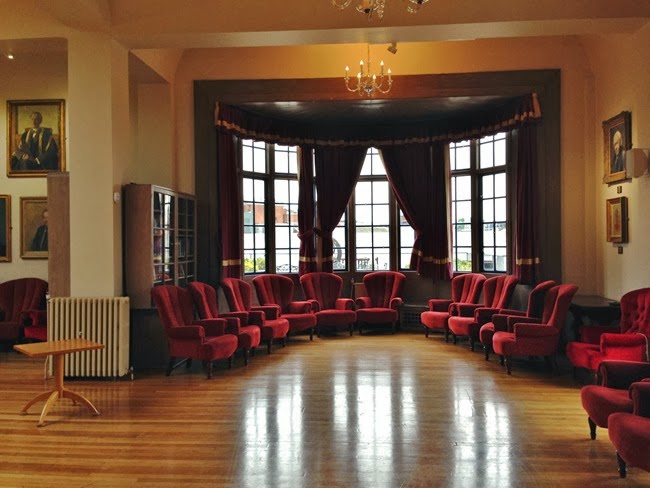 Directly through those windows above, we spied a little frog, so we headed outside to investigate.  This little guy was standing on a pedestal with no name or explanation other than a cryptic poem engraved in the stone column below him.

Seven lilied seas | We leap into adventure | Talei Jones and I 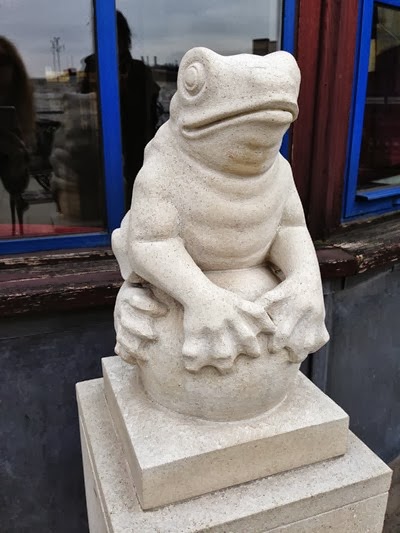 It was hard to find any information on this, but I was really curious because something about the poem just struck me.  After some pretty deep Google searching, I pieced together that Talei Jones was an LSE alum originally from Fiji, who was killed in a car accident just a couple of years ago.  I couldn’t find any mention of this statue anywhere, but I would imagine it was put in place by friends of hers from the school.  I thought it was a really lovely and whimsical little tribute.

From the same outdoor space, we could look down on the fourth floor terrace we’d just visited: 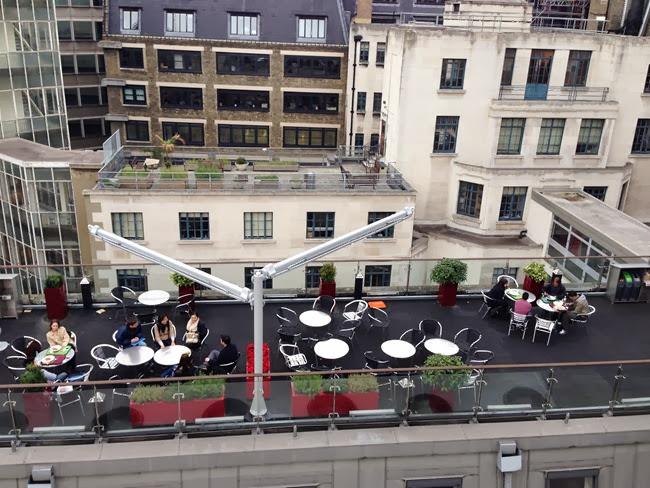 I can’t wait to bring my lunch up there on breaks between classes!

We followed a professor with a REALLY bad toupee, skipped down a little fire escape, and found our way back inside a half-floor down from the top.  The LSE campus seems to have all these little twists and turns, secret doors and funny passageways, and I absolutely love it!  For a large school in a big city, the campus is relatively compact, so I think it has expanded upwards and taken advantage of every bit of space it can!

Back inside, we had a dizzying vantage point down through the stairwell. 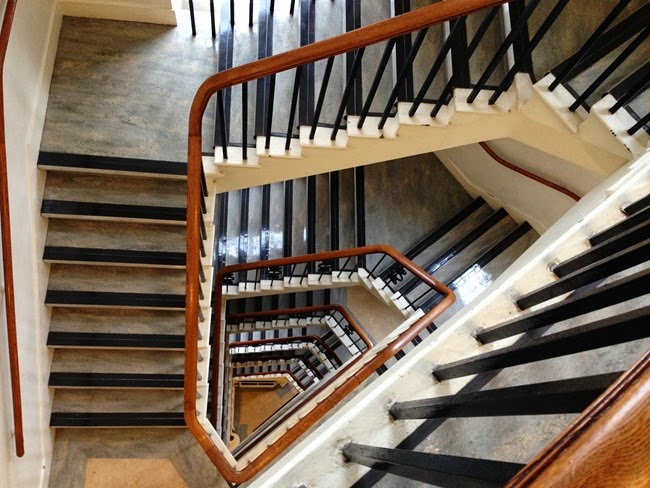 We spiraled down the stairs, stopping at each landing and floor.  The corridors and offices on each level were completely different, as though they’d been decorated one by one over many years.  Every window gave us a different view, and eventually we looked out to see our free lunch benefactor! 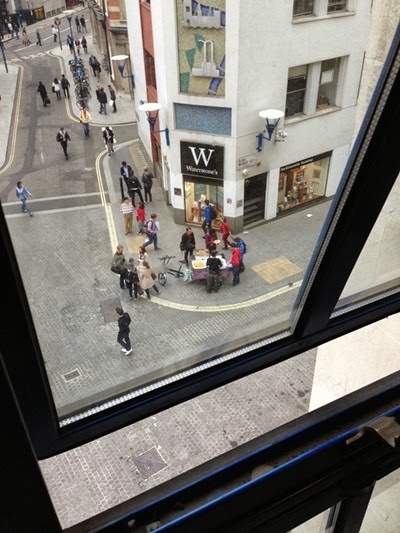 I’m very curious to see if he’ll actually be there every day.  I mean, we’ve all heard that there’s no such thing as a free lunch… but here’s hoping!