Okay, on to the point.  I thought I’d pop in with a quick update on some little London adventures that I haven’t blogged about yet!

The theatre is, without a doubt, one of the best things about living in London.  The West End’s international reputation is well-deserved.  My school is right on the edge of the theatre district, so I frequently walk past adverts for plays and musicals that I’d love to see.  My list is neverending; honestly, I know I’ll never get to everything I want to see, especially since there are new shows opening constantly!  But I have made a bit of a dent. 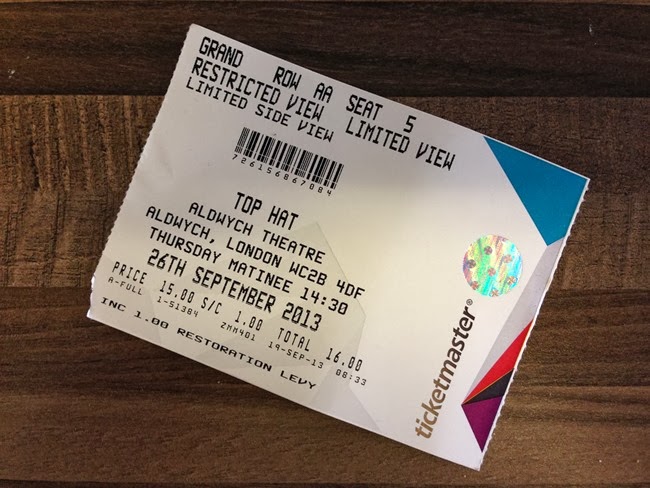 The first show Amity and I went to see was the musical Top Hat.  It’s the same Top Hat as the Fred Astaire and Ginger Rogers movie, which for some reason I didn’t think I’d seen until the orchestra started playing the opening notes and I recognized the score.

It was playing at the Aldwych, which happens to be within view of LSE.  Quite convenient.  Anyway, as you can somewhat see from the photo below, we were quite out of our demographic.  We’re sort of old souls though, so I think we fit in rather well. 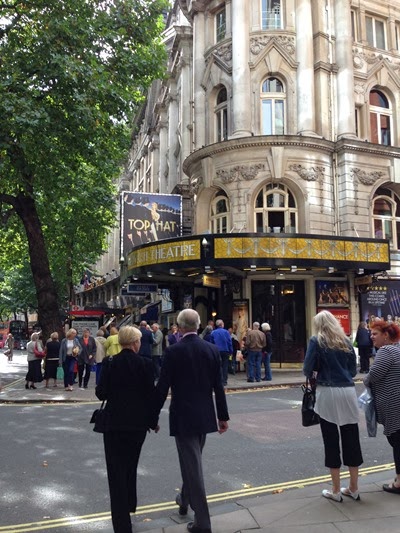 We got our tickets for a good deal because our original seats were restricted view.  They were along the side of the balcony and, if we sat back in our chairs, we actually couldn’t see the stage at all!  We figured we’d be fine to just sit forward and lean on the rail, and we even formulated a back up plan of assuming a TBF (tandem bicycle formation), where we could turn our chairs sideways along the rail and perhaps see better that way. 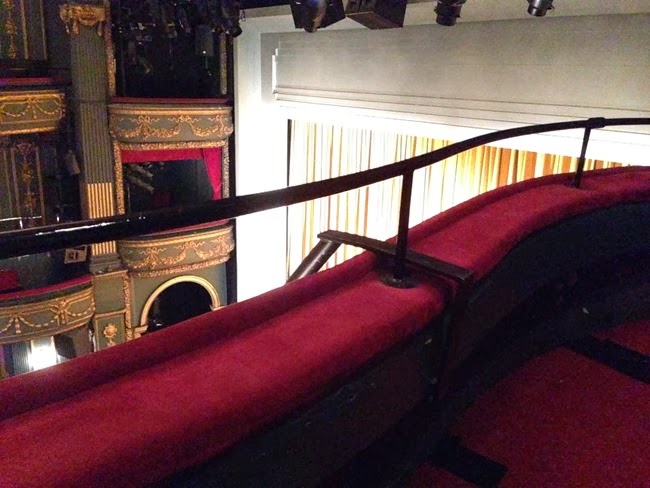 However, the theatre was only half full – it was a matinee showing and the musical had been playing for months already – so before the curtain rose, an usher came over and offered us front row balcony seats!  It was very nice of him and worked out perfectly.

The view was excellent and the musical was so fun (SUCH FUN!).  It was a little cheesy and overdramatic at times, in typical 1930s stage acting style, but I loved that.  I was constantly laughing out loud, and Bates the butler was the runaway star.  His impersonation of a Venetian gondolier was particularly fabulous.

A few weeks later, we skipped the West End and took part in another London exclusive: a couple of showings with the London Film Festival! 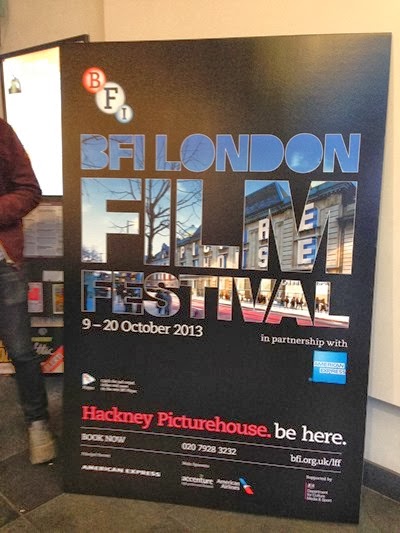 Our first show was out in Hackney, in a neat old movie theatre with a bar and pub kitchen on the ground floor.  The movie was an independent film called Starred Up, and it was a very raw and realistic story about an adolescent son who is arrested and “starred up” (moved prematurely) to an adult prison due to violent behavior – a prison where his father is an inmate as well. 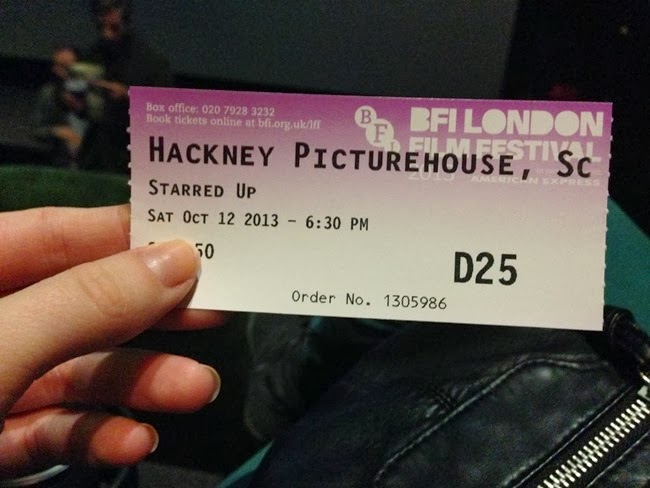 I thought it was an extremely well-made film.  It was definitely a bit rough and disturbing in certain parts, but the characters and their interactions were a much stronger theme of the movie than the violence.  The main characters included the son and the father, of course, as well as a few of their fellow inmates, some of the prison guards, and the prison therapist.  He was played by Rupert Friend (Mr. Wickham from the new Pride & Prejudice!) and was one of the best characters, I thought.  He truly had a heart for the prisoners and wanted to help them better their lives, and he viewed them as human beings when most of the guards did the opposite.  It was so interesting from a social psychology point of view!

I really can’t do it justice here – this blog post would be way too long if I tried to fully review it – but suffice it to say that the acting was phenomenal and it was a great film overall!  Since it was part of the film festival, we also got a special treat afterwards.  The screenwriter and one of the actors were on hand to answer questions from the audience. 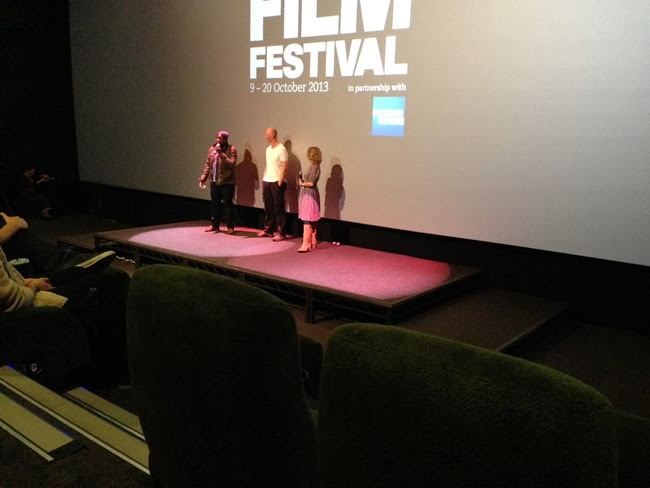 The screenwriter was inspired to write this film after working as a prison therapist himself for many years, and two of the former inmates he had worked with were also in attendance and introduced themselves.  I thought that was so interesting and I really admired them for being willing to speak about their experience.

Well, this was another amazing movie with the London Film Festival, but I really have no photos to represent it so this will be a quick recap.  This film was directed by and starring Ralph Fiennes (who is so great even though he’s Voldemort!), and was based on the true story of Charles Dickens and his mistress, Nelly Ternan.

The sets, costumes, and acting completely transported me back to England in the 1800s.  The whole film was sort of sepia-toned and had a melancholy air, which set the mood perfectly.  Due to many extenuating circumstances, Charles Dickens’ and Nelly Ternan’s relationship was really doomed from the start.  I learned a lot from the movie (for example, that Dickens was in a terrible train accident but was uninjured), and I’d really like to read the book it was based on now.

If this comes out anywhere near you, I’d recommend it to anyone.  Another great film and a bit more of a crowd-pleaser than Starred Up, I’d wager.

Just last night, Amity and I finally went to see the show I’d been waiting for the most: Jeeves & Wooster in Perfect Nonsense!  This was the first show we booked when we got to London.  Maria lent me a Jeeves & Wooster audiobook a couple of years ago (and has lent me many more since), and I’ve gotten completely obsessed.  Go get your hands on one of P.G. Wodehouse’s novels, or on one of the audio versions read by Jonathan Cecil. 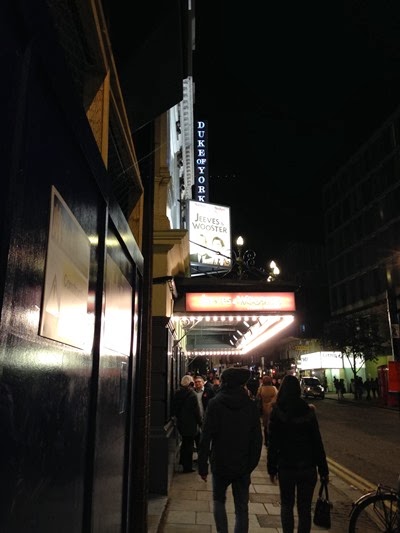 Got it?  Perfect.  Trust me, you’ll be hooked.  These are simply the funniest stories I’ve ever read.  Luckily, there’s a nearly endless supply, as good ol’ P.G. wrote about eight thousand (<—slight exaggeration) novels and anecdotes detailing the shenanigans of hapless Bertie Wooster and his eternally stoic and always-to-the-rescue valet, Jeeves.

So how exciting was it to see them on stage, played by the perfectly cast (I cannot emphasize that enough – PERFECTLY CAST!!) Stephen Mangan and Matthew Macfadyen?  More exciting than meeting the Queen.  There, I said it.  Good gracious, this was the best thing ever. 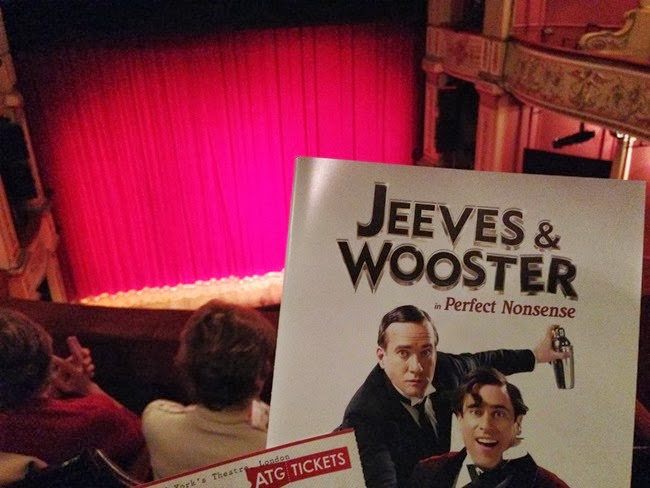 For one thing, this was a brilliantly clever adaptation of books than are written in a rather tricky style.  For whatever reason, it only occurred to me once I was in my seat and flipping through my program that the best bits and funniest one-liners of Jeeves & Wooster stories often take place through Bertie’s hilarious narration, not in the actual action of the plot.  So how do you translate that to the stage?

Basically, the play was staged as a play even from the characters’ points of view – a play within a play (Playception!).  Therefore, Bertie, Jeeves, and even old Seppings were all helping to act out parts and tell the story of Bertie’s latest antics.  It was one of P.G. Wodehouse’s own stories but told in a very different way – yet it completely retained the essence of the characters.  Jeeves was doing things Jeeves had never done, but exactly as Jeeves would do them.  Does that make sense?  Not really? 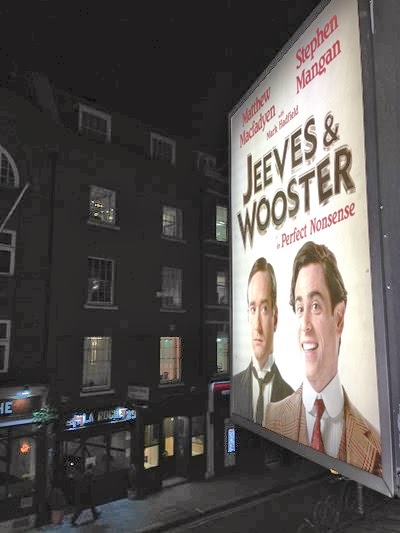 But the best part – better than Bertie in a bathtub, Seppings’ myriad of impressions, and especially Jeeves as the inimitable Sir Walter Bassett – was the curtain call.  The play ended, the actors bowed, and then… they danced.

All three of the actors launched into this perfectly choreographed goofy little ragtime dance routine for a good five minutes.  They stayed absolutely in character, which was even funnier.  Bertie and Jeeves were doing the same exact dance moves, but Bertie with his everpresent lunatic grin and Jeeves with his dignified butler expression firmly in place.  I was laughing so hard I was crying.

Sorry, that wasn’t a quick update.  You guys should know not to expect those by now.  Long-winded is more my style.

Well friends, I really need to run!  I’m off to Cumberland Lodge on the grounds of Windsor Castle for the weekend for a semi-academic retreat with my program.  Check back next week for the details of that little adventure!  What ho, chaps!