Since the Brits don’t celebrate Thanksgiving, the Christmas season feels like it started a long time ago here.  There’s none of that silly “wait until December 1st” nonsense about when you can start listening to Christmas music, and the city has been decorated for weeks.  Christmastime in the big city, regardless of which big city it is, is always so festive and energizing, and London is no exception! 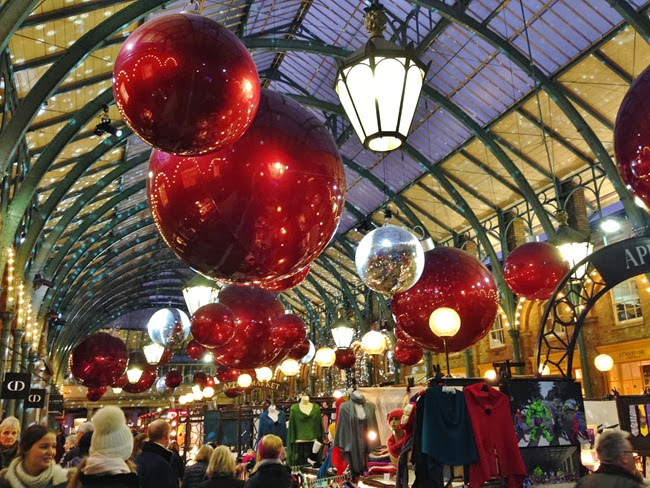 Covent Garden market is all decked out in gigantic Christmas baubles, with a few other holiday staples in place as well… 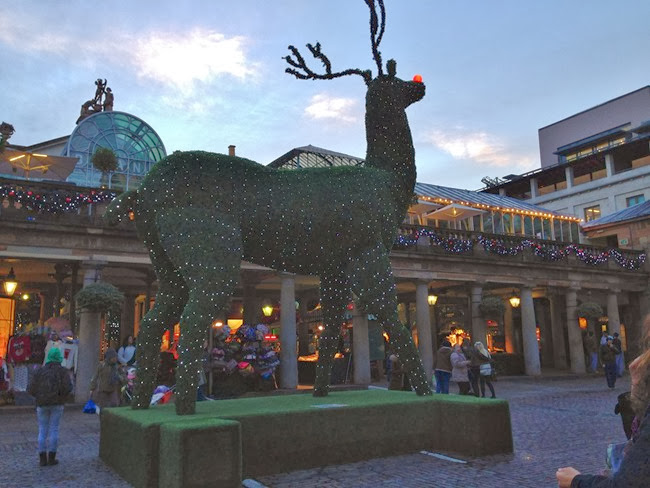 The shop windows are decked out in fake frost and holly garlands, and the pubs are advertising Christmas high tea and mulled & spiced everything (yes please!).  Stacks of old-fashioned sweets are piled up in storefronts (although somehow I’ve yet to find those chalky peppermint sticks, which I love). 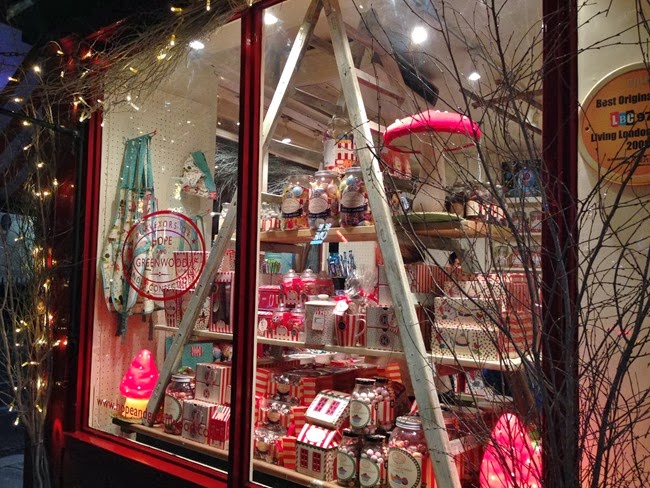 There’s a pub right near school that has adorned the sidewalk in both directions with archways of live winter greenery! 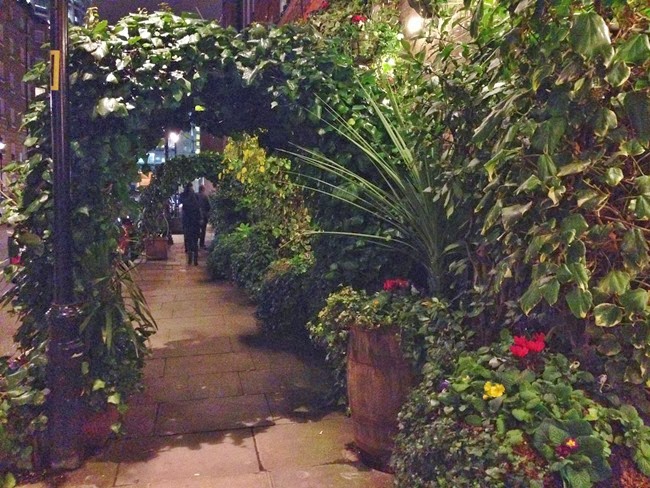 Everything is bright & glittering and even the mannequins are being friendly! A few weeks ago, some friends and I wandered over to Oxford Street after class to watch them ceremonially switch on the Christmas lights.  We stopped to admire the giant Christmas tree in Covent Garden (a teeny tiny baby compared to Rockefeller Center, but still quite nice). 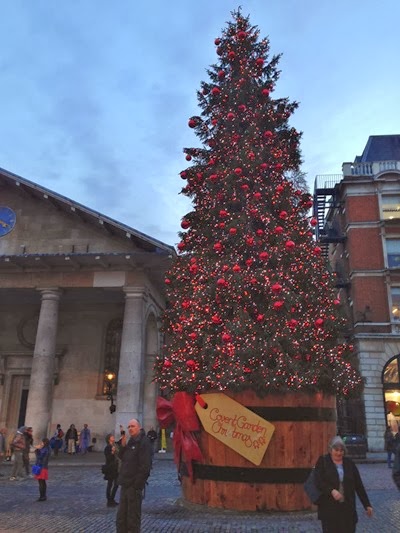 I personally loved the icicle lights that are strung all throughout Covent Garden and down King’s Way.  They twinkle very subtly and are supposed to look sort of like snow falling… it’s a nice effect.

We carried on down to the main event, which was taking place outside Selfridges, one of London’s big department stores.  In retrospect, it might have been better to watch from a bit farther away, because the streets were packed with everyone trying to see Jessie J perform before she switched on the lights (they always have a guest celebrity do it, but she wasn’t really a draw for us).

Now, this is a £2 million light display that they’ve been assembling since June and which stretches nearly a full mile through central London… but it still just takes a little flip of a switch and was a wee bit anticlimactic in the end. 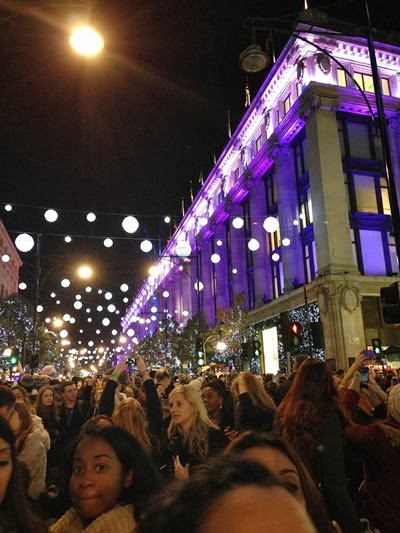 Again, these lights are snow-themed, and they don’t look that exciting in these photos, but it really is a wonderful effect when you stand in Oxford Street and get a straight view down the entire way. 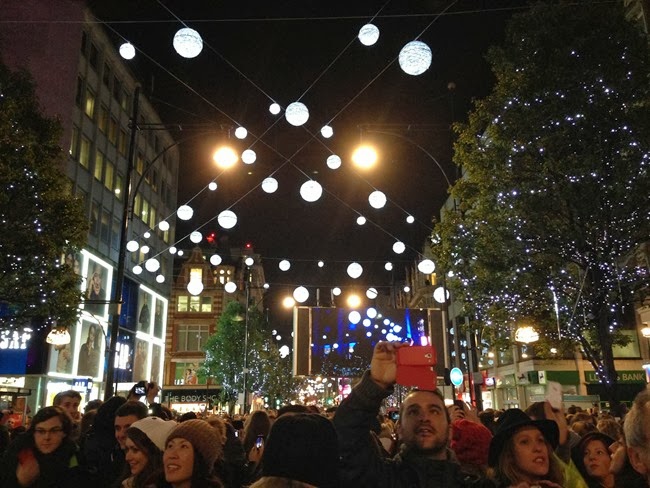 We hung about for a bit before heading back the way we came.  We all wished the switch-on celebration had included hot chocolate or roasted chestnut stands because our fingers and toes were pretty chilly by that point. 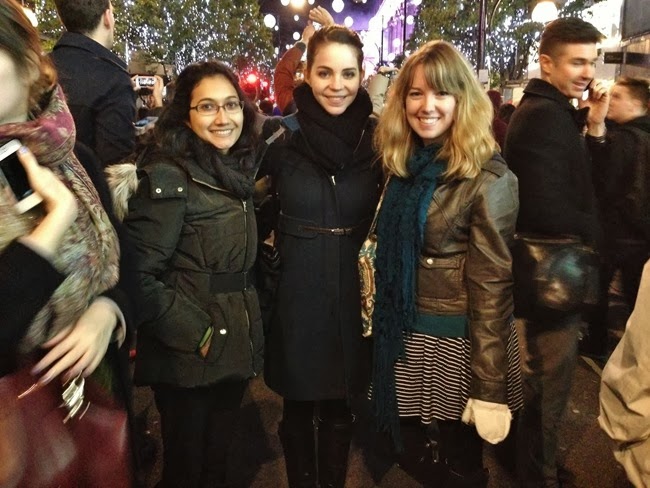 Somerset House, which is right on my quick walk from the tube station to campus, is another spot all dolled up in its Christmas finest.  I haven’t gone ice skating there yet, but I did duck in one day last week to take a peek. 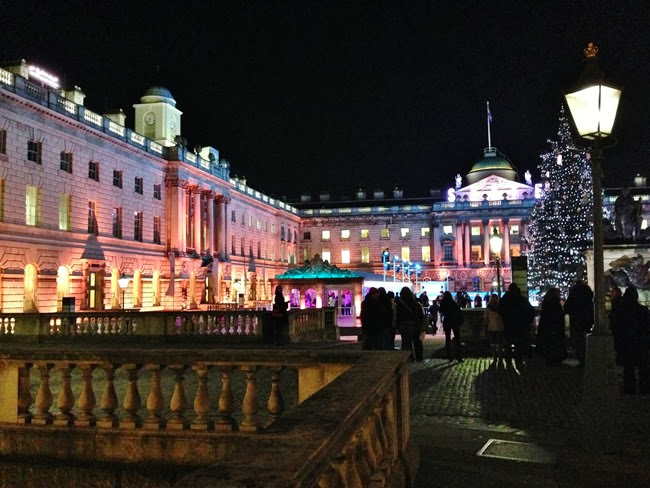 Luckily, I got there right in time for the best part: the zamboni man!  I even got to teach someone the word “zamboni.”  Just spreading the wealth, folks. 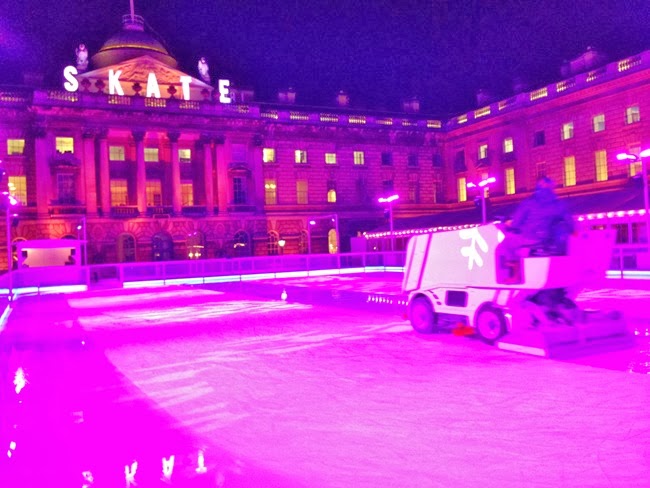 Amity and I had another Christmas-y jaunt just last night, when we took a quick break from schoolwork and took the tube a few stops to Sloane Square.  I take the bus home once in a while, and ever since the holiday decorations have gone up in Sloane Square, I’ve been wanting to go see them! 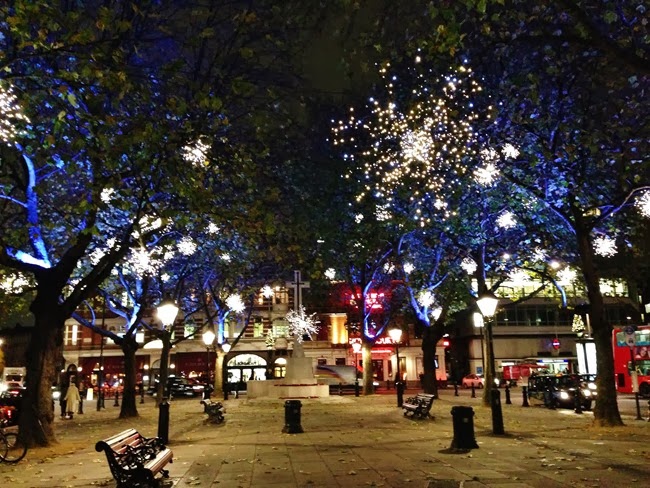 I just love the huge sparkly snowflakes floating in the trees that are lit up blue from within. 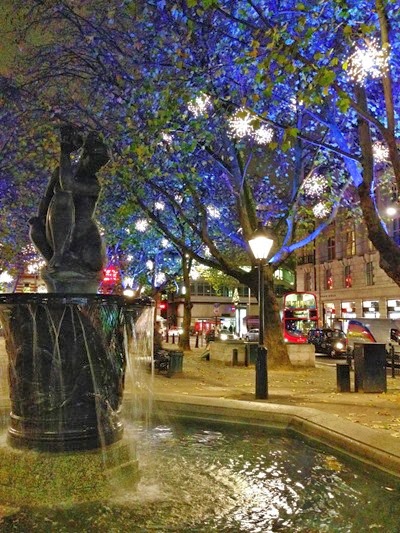 We walked around for a while and discovered the best festive window display I’ve seen yet.  I think it was Peter Jones, who had a whole herd of cold-weather critters made entirely out of homegoods from the store!  Some of the cutest were these red squirrels made out of tea sets and the reindeer made out of vacuums. 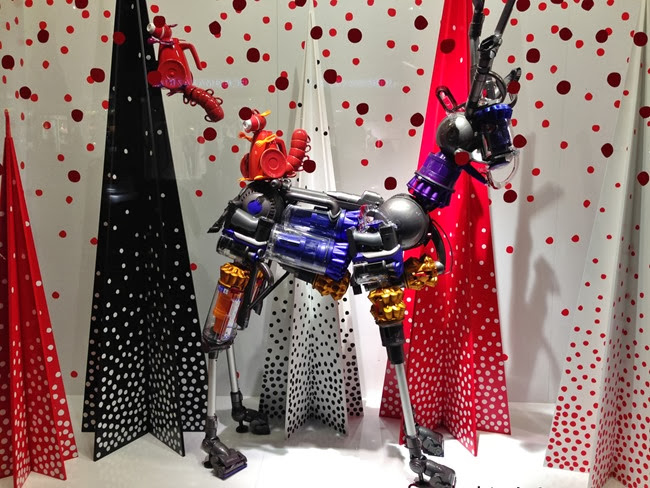 We took a last look around and headed back to the tube station. 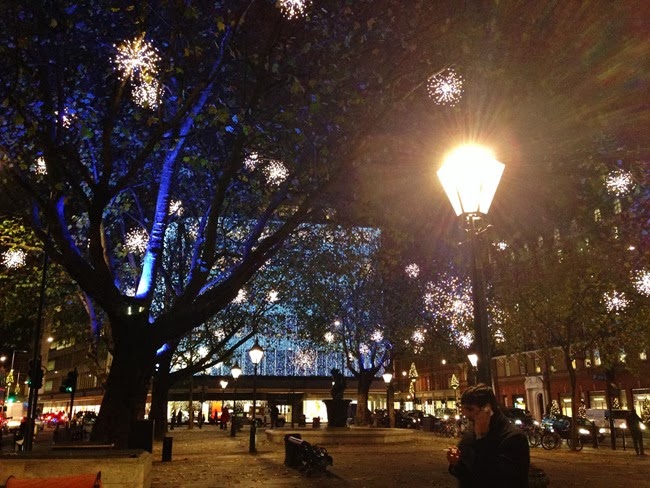 Narnia!  No sorry, there I go with the lamp posts again.  It doesn’t even make sense; it’s always winter but never Christmas in Narnia.

I hope you’ve enjoyed this first little tour of London at Christmas – I’m sure there will be more festive features to come!  I’m going to go take it easy for the rest of the night because I’m gunning for some theatre tickets that are going to be released in the morning and I need to have my wits about me.  Last week I got a ticket for the Monty Python Live show next summer which apparently sold out in 43 seconds, so my reflexes are pretty hot right now, but it never hurts to be prepared.

7 thoughts on “Christmas in London”