Christmas 2013 was an untraditional one, to say the least.  Even though I’ve now been away from home for Easter five times, this was the first time in my life that I wasn’t with my family for Christmas.  It was sad to be apart from them, but the Stark family were such wonderful hosts that I couldn’t feel gloomy for long.

As I mentioned before, Christmas Eve is the day of holiday festivities in Germany, so Christmas Day is usually relaxing and relatively uneventful.

In typical form, Katharina had yet another fun surprise up her sleeve, so off we went to visit the beautiful Burg Hohenzollern, just a short drive from her parents’ home.  This is castle #3 of the trip, if you’re keeping track.  Katharina kept saying, “Now, I don’t want you to think that Germany is nothing but castles!” but then off we’d trot to another castle the next day.

Katharina described this as a true fairy tale castle.  Like the iconic castle in Disneyland, Burg Hohenzollern was created in the style of the famous Neuschwanstein Castle, meant to represent the ideal of a medieval castle.

Like so many others, Burg Hohenzollern has been destroyed and rebuilt multiple times over the years.  The original castle was built in the eleventh century, but the current structure is the third incarnation to stand on this spot.  (Is incarnation the right word?  I’ve been watching too much Doctor Who.  Wait, not possible.) 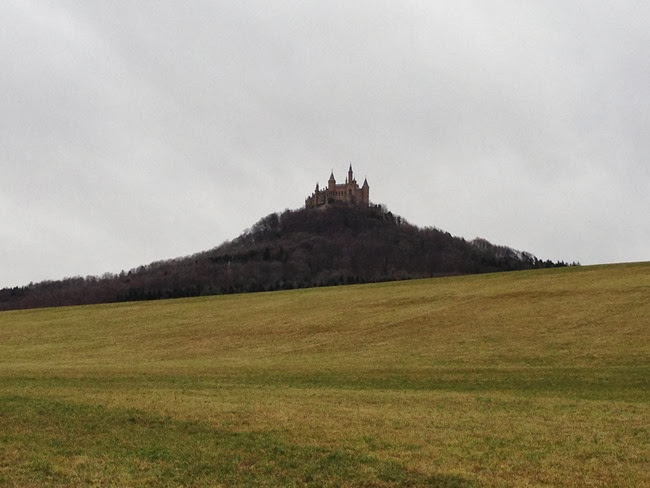 Timo met us in the parking lot and we decided to skip the shuttle bus in favor of walking up the steep woodsy path to the castle.  The huffing and puffing was worth it for the views! 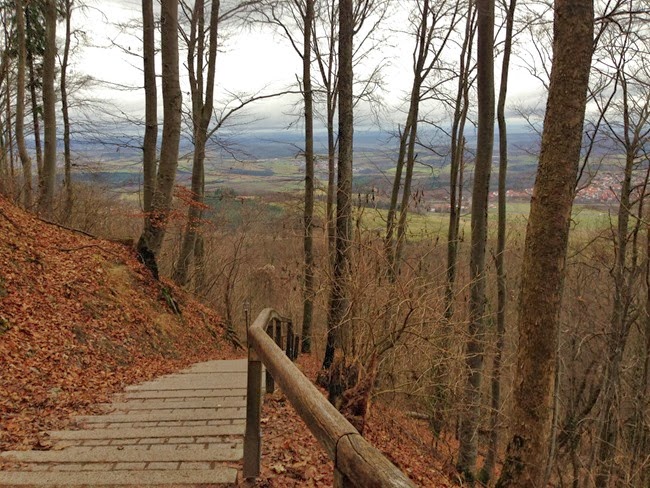 We entered through the gates and spent a little time poking around on our own.  The castle is all spires and battlements and ivy-covered walls and is truly exactly what you think a castle should be. 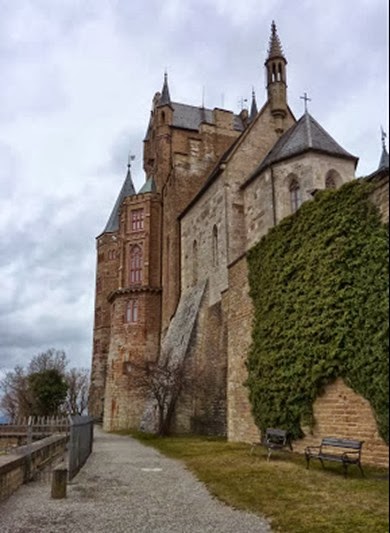 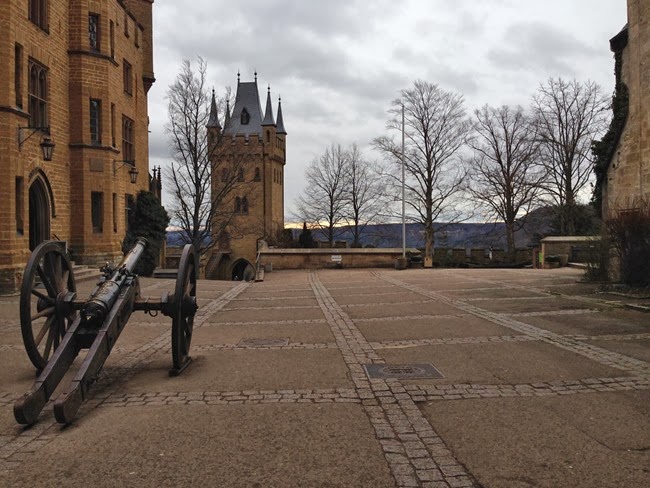 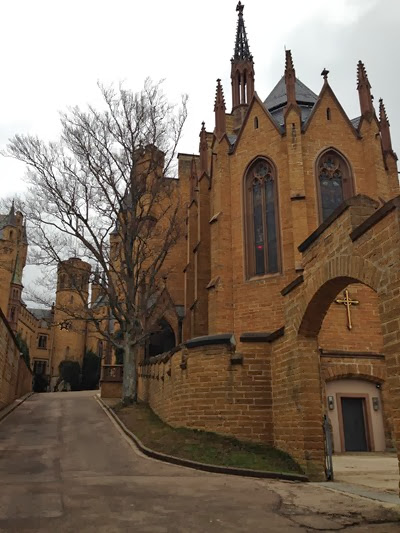 There’s a walkway that follows the wall almost the entire way around the castle and which looks onto some amazing panoramas of the German countryside.  These are the kind of sights that make me really feel like I’m in a different country!  There’s something magical about looking on to a landscape that you’ve never ever seen before. 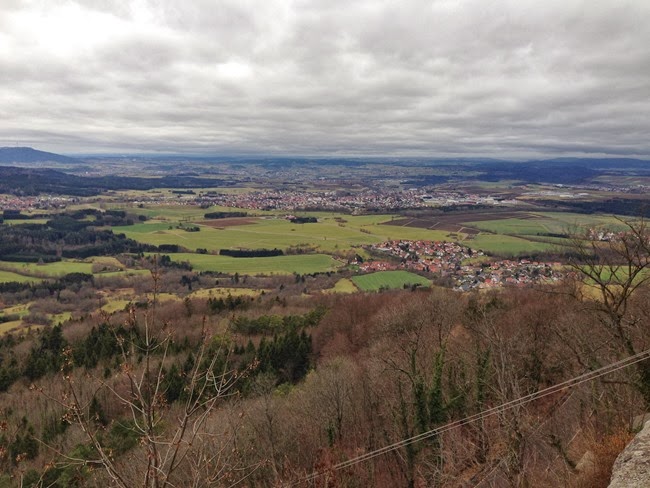 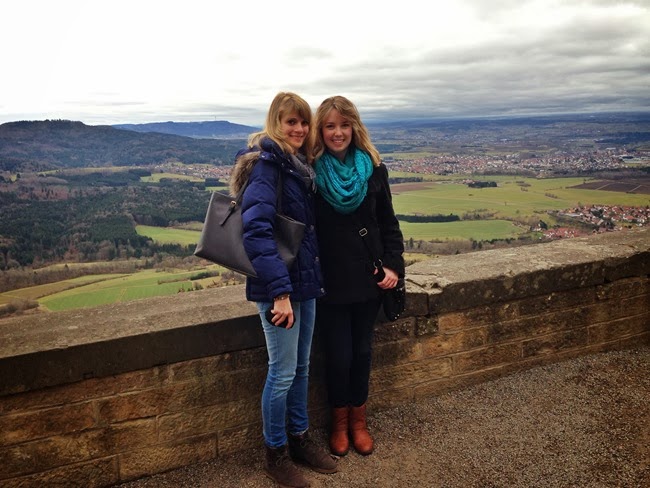 It started to mist a little bit, so we moved on to the interior parts of the castle and spied this secret little courtyard complete with spiral staircase and miniature Christmas tree.  It was the second time that month I felt like I was at Hogwarts at Christmas! 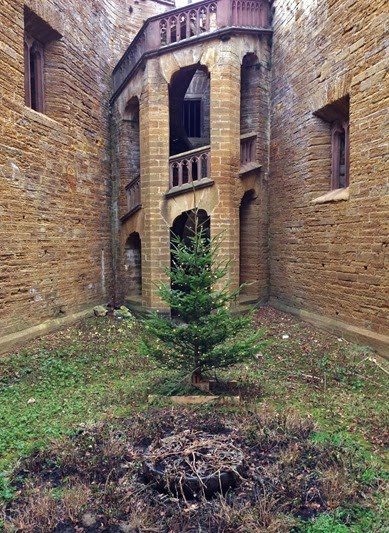 We took a guided tour of the interior of the castle, but no photos were allowed (that’s where I learned the phrase “Bitte nicht fotografieren,” actually).  The castle is so well preserved, including the original hardwood floors, that we all had to wear gigantic felt slippers over our shoes that made us look like clowns and shuffle along like penguins.

After our tour, the rain had picked up a bit, so we didn’t dawdle before skipping back down the mountain to the car.

We all spent a relaxed evening at Katharina’s house, enjoying dinner together and looking up places in the US and New Zealand in Katharina’s dad’s atlas.  After some more Christmas cookies and proper German beer, Timo, Katharina, her brother, Johannes, and I broke out the poker chips for a few good old fashioned rounds of cards. 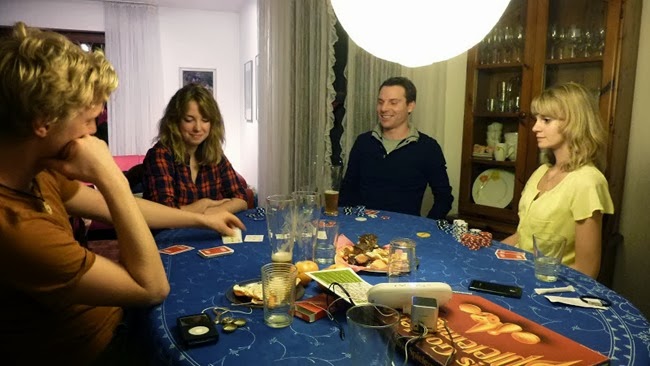 Timo taught us all how to play Texas Hold’em and before we knew it, we’d whiled away nearly four hours at the kitchen table.  And guess who was the big winner? 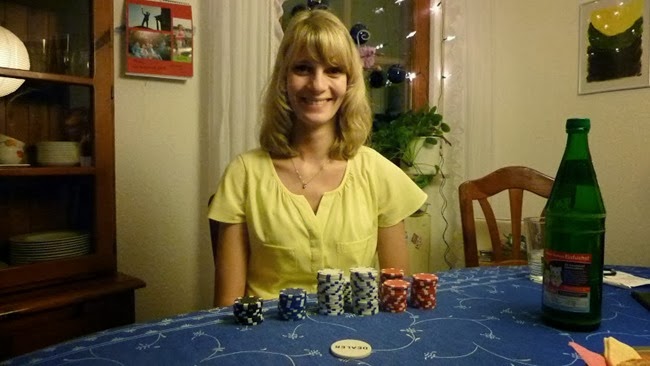 Katharina brought it home!  I’m not destined to be a poker champ.  I’m too much of a risk-taker (or I’m just bad).

That night, Katharina, her mom, and I stayed up late chatting in the living room – about New Zealand, Germany, England, their cultural differences, recipes, and everything in between.  It was a lot of fun to get to know another culture and spend some time with such a wonderful German family.

The next morning, we made sure to snap a self-timer “family” photo before Katharina and I left for Stuttgart so I could catch my flight back to London. 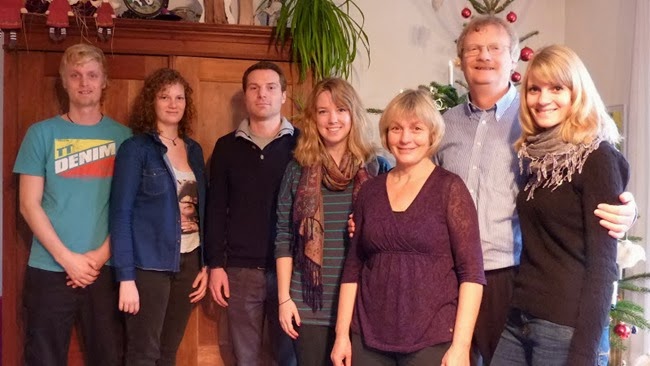 I loved getting to learn more German during the trip, and I was especially touched when Katharina’s dad, who was not very comfortable with English and mostly relied on Katharina to translate for him during my visit, hugged me and said perfectly, “Goodbye, Julie, see you again!”  Saying goodbye to Katharina reminded me of how sad it was to do so in New Zealand, but we’re already planning on her visiting London sometime during the coming year, so hopefully our next reunion isn’t too far away!

My flight to London connected through Brussels, so it was a bit of a mindbender to switch so rapidly from using my tiny bit of broken German in the Stuttgart airport, to the French that I haven’t used in a few years in Belgium, and back to good ol’ English once I arrived in London.  It actually felt a bit odd to understand everybody I came across (and vice versa) back in England.

Even though it was a bit nerve-racking at first, I think it was a really valuable experience to visit a country where I didn’t speak the language.  English speakers especially tend to have it pretty easy in world travel, so I think it’s important to remember that we’re not the center of the world and that sometimes we’d do well to make an effort in learning the language and customs of other cultures.