“For that is the mark of the Scot of all classes: that he stands in an attitude towards the past unthinkable to Englishmen, and remembers and cherishes the memory of his forebears, good and bad; and there burns alive in him a sense of identity with the dead even to the twentieth generation.”

The next morning, Amity and I breakfasted (I like using “breakfast” as a verb) at 8am, again well before the sun rose.  Way up north in Inverness, it didn’t rise until about 9 o’clock!  We ate in an adorable little breakfast nook with old maps and sketches on the wall that looked over the River Ness.  Well, it would have if it hadn’t been dark out.  Here’s what it looked like later:

Mary had the radio on in the kitchen and the show host was interviewing Eddie Izzard, who was talking about how his grandmother used to hoard sugar when there was a sugar shortage.  He’s great.

The weather was nice, so we backtracked and drove south along A82 so we could actually see Loch Ness.  We found a carpark that had steep steps right down to the shore. 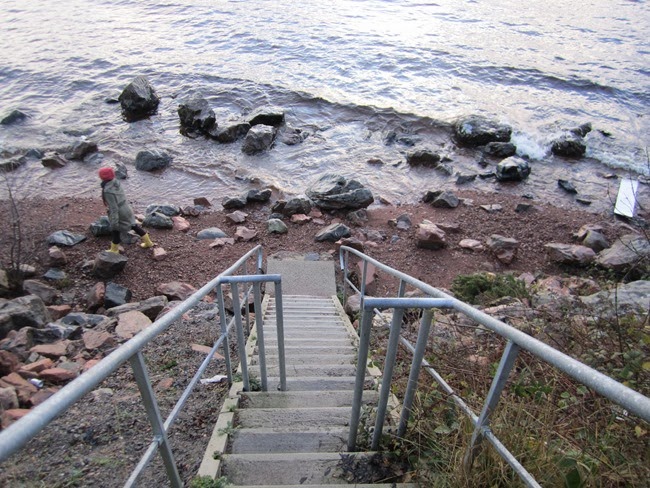 The loch was beautiful and it was incredible to actually witness and experience such a legendary place!  Still no Nessie sightings, though. 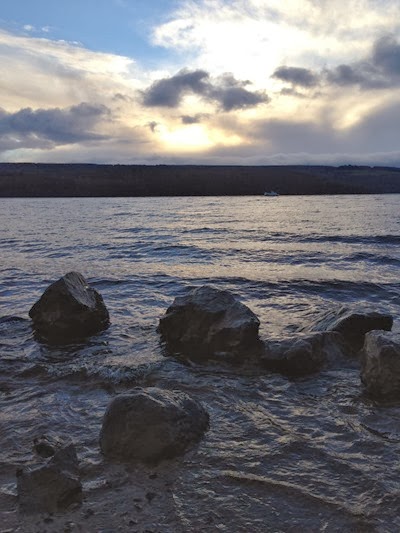 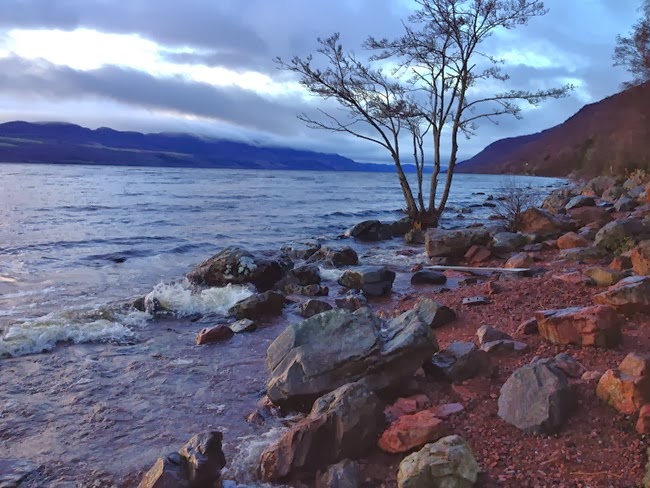 We went a little bit further south and decided to visit Urquhart Castle, a ruined fortress from the 13th-16th centuries that sits right on the banks of Loch Ness. 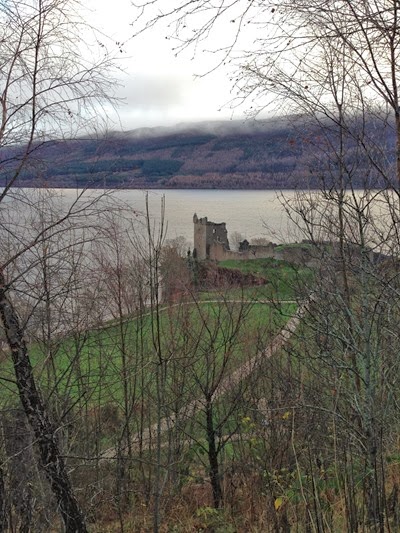 The castle, like most of Scotland, has a very fascinating history on which we watched a short film (introduced by an endearingly awkward girl who listed out all the languages we could choose to hear the film in even after we’d spoken with her in clearly native English).  I do really feel like I got to soak up a lot of Scottish history for just a short week there, which was excellent.

Then we got to explore the ruins on our own. 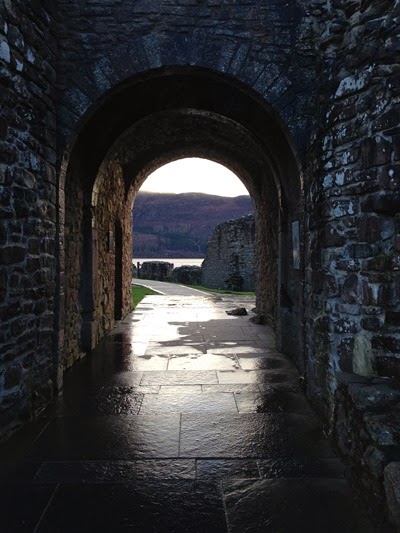 We had both good luck and good planning on the trip – by hitting spots like this early, we often had them all to ourselves!  It was great to wander around the castle and get photos that weren’t teeming with tourists pretending to lean on things. 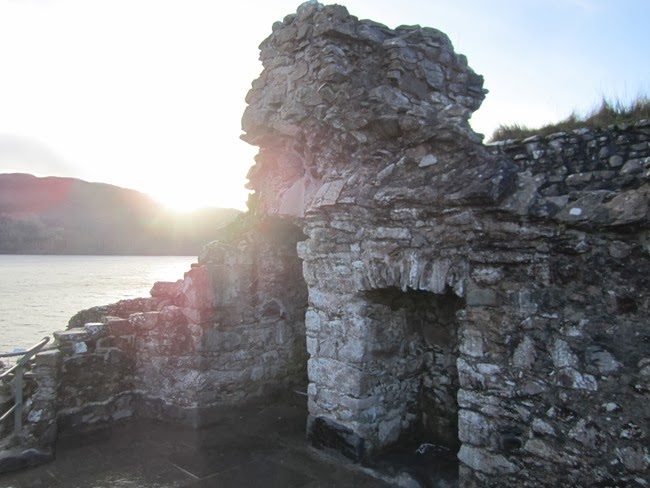 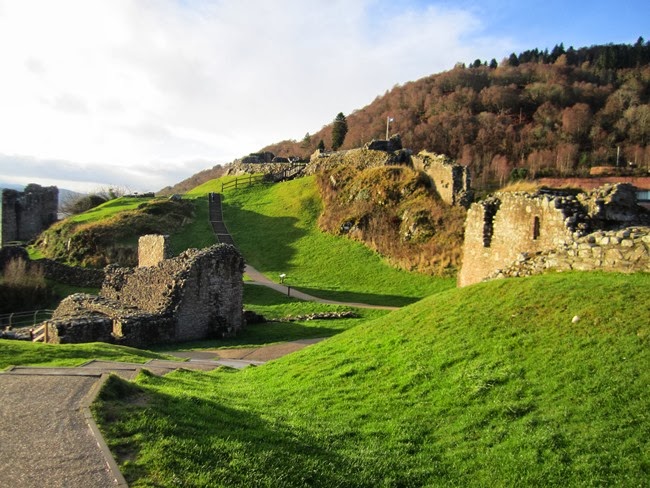 In the hour or so that we walked around the ruins, there were snow flurries and brilliant sunshine and dark clouds rolling in – the light was amazing! 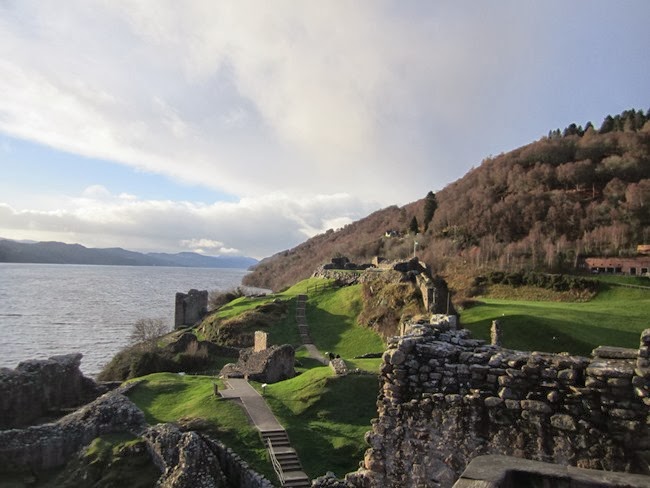 I loved standing up in the windy tower (which was once bedchambers) and taking in the view all the way down Loch Ness and the Great Glen. 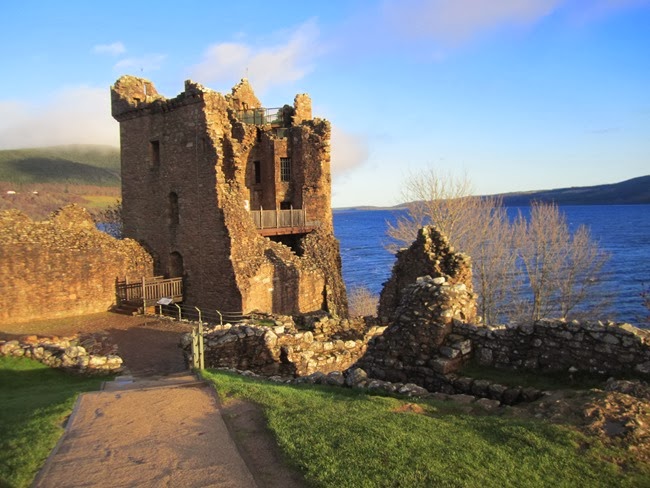 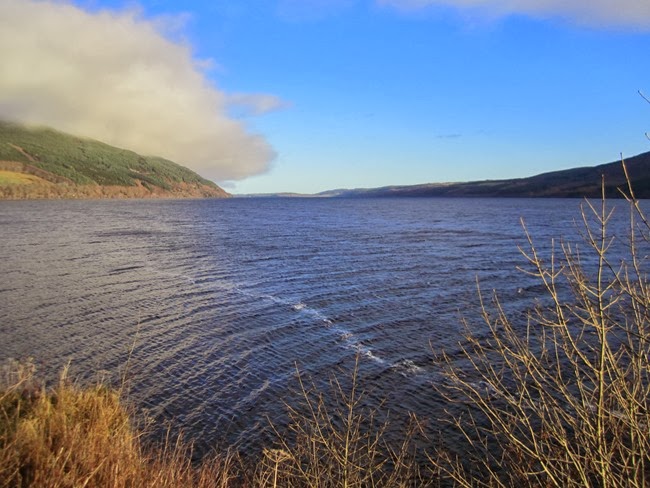 Scotland is such a beautiful country. 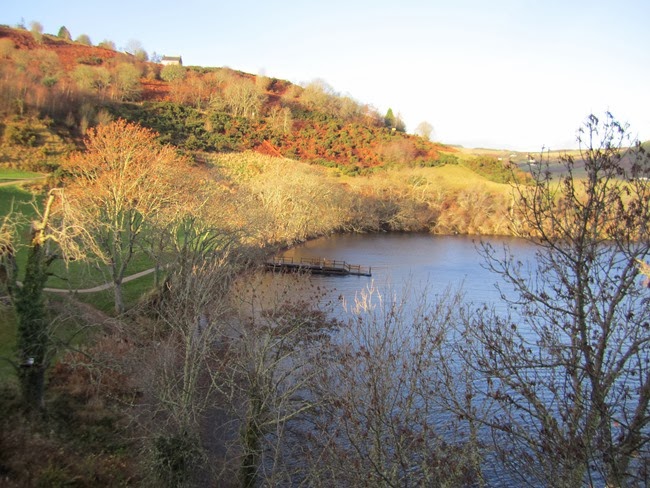 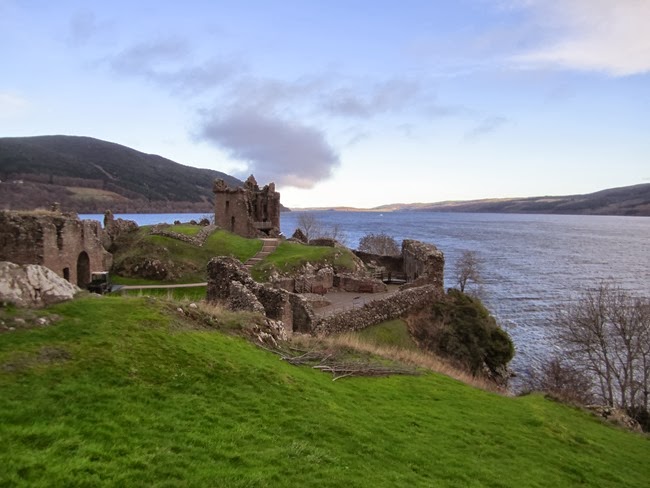 We also learned a little Scottish Gaelic from the informational signs.  My favorite was “Robert the Bruce raid apon a litill palfray” – palfray meaning pony – closely followed by a long-ago writer’s recollection that he had just felt an erth-quak! 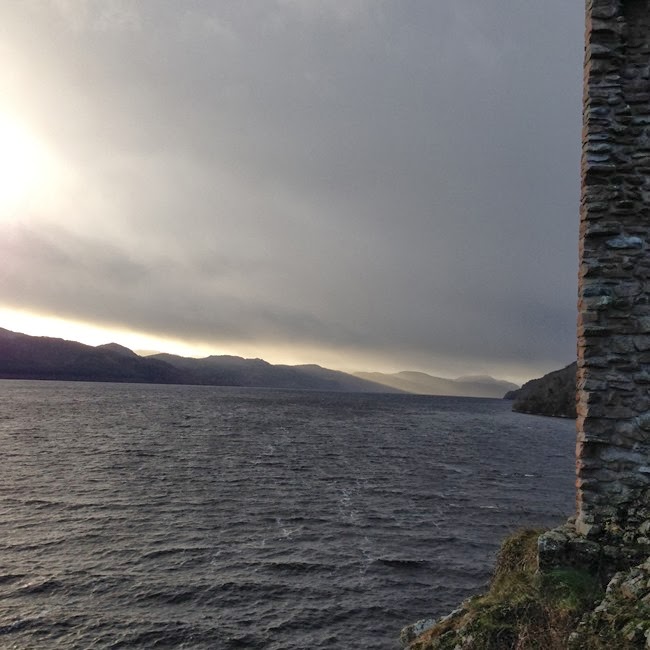 As we drove back north, a huge, vibrant rainbow appeared right in front of us, coming down into the middle of the loch.  As Amity will tell you, this was my ideal situation.  Somehow I managed to keep the steering wheel straight long enough to pull over and snap a photo. I believe this was also when we were listening to Fern, the spazziest BBC radio host ever, who liked to talk about her Christmas parties, which are usually attended by lots of quasi-famous people.  Also that super creepy new song by Jason Derulo.  He is a big weirdo.

The rain picked up, so once we got back to The Ghillies, we made tea and relaxed in our room for a while.  We were both sorely tempted to crawl into our beds and nap the afternoon away because we were so sleepy and comfortable, but we knew we had to make the most of our time in Scotland despite the rain! Unfortunately, most sightseeing or wandering about the town was vetoed by the weather, but Amity had the brilliant idea to look up movie times, so we bundled up again and walked across the river to the Eden Court Theatre to see the second installment of The Hobbit. 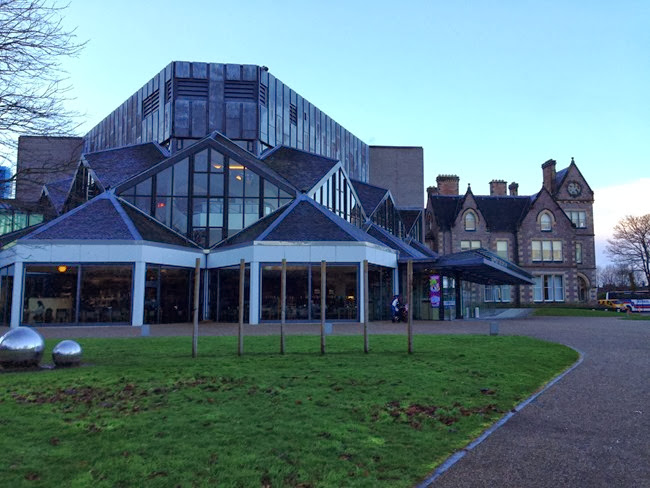 It wouldn’t be a true Amity & Julie trip without an LotR movie!  I still don’t think this trilogy is even close to living up to The Lord of the Rings, but I still liked the movie overall.  Highlights: Peter Jackson eating a carrot, Gandalf’s sparkly scarf (why was it sparkly?!), Bilbo kneeling nonchalantly when Smaug spotted him.  Martin Freeman is such a perfect hobbit.  But I digress.

After the movie, we walked into the Inverness city centre and got takeaway sandwiches from the M&S, passing Inverness Castle on the way. 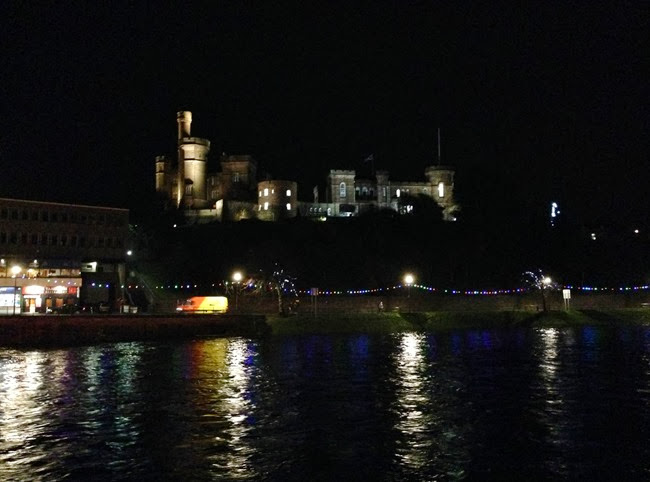 We meandered our way back and finally returned to our tartan oasis. 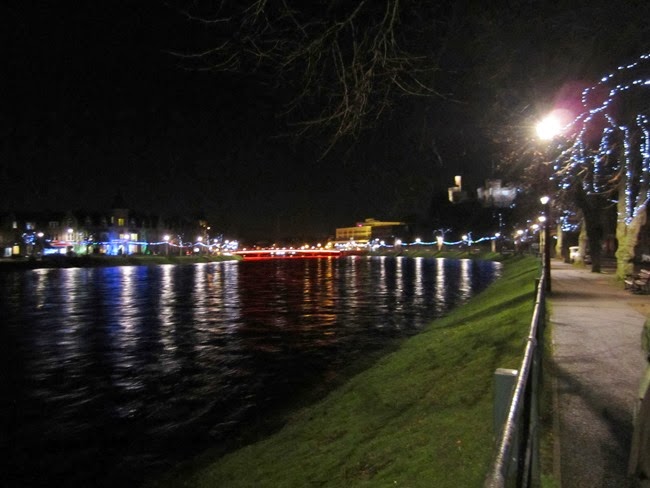 If I remember, we watched the episode of Top Gear with Slash on and then turned in early.  Another happy day in Scotland!

Up next: Edinburgh!  So start practicing your proper Scottish pronunciation now because you’ll be saying it a lot (at least if you’re reading these blog posts dramatically out loud, as I like to think that some of you are).  It’s ED-in-burr-uh, not ED-in-burg.  Don’t ask me why.  Perhaps my litill palfray would know.