To say that the month of December was jam-packed would be an understatement.  Nine hours after I returned to London from Germany, my parents and younger brother arrived for a week-long visit!  As I hadn’t seen them in four months and none of them had ever been to London before, I was really excited to show them around.

We took their maiden tube journey from Heathrow and got them all settled in to their hotel near Earl’s Court.  They lucked out with a pretty perfect London view!  It was raining that morning, but the sun came out later on and we definitely enjoyed more fair than foul weather during their visit.

Our first order of business was getting these worn & weary travelers some sustenance.  We had lunch at The Waterside (the greater London population has still not discovered the newly-renovated Imperial Wharf plaza so we had the place to ourselves!), but when one of our party – no names mentioned – fell asleep at the table, I realized it would take a more active approach to keep the jetlag at bay.

Not wanting to overtax my visitors too much, I promised a few hours of leisurely sightseeing before they could relax for the evening, so we hopped on the tube once more. 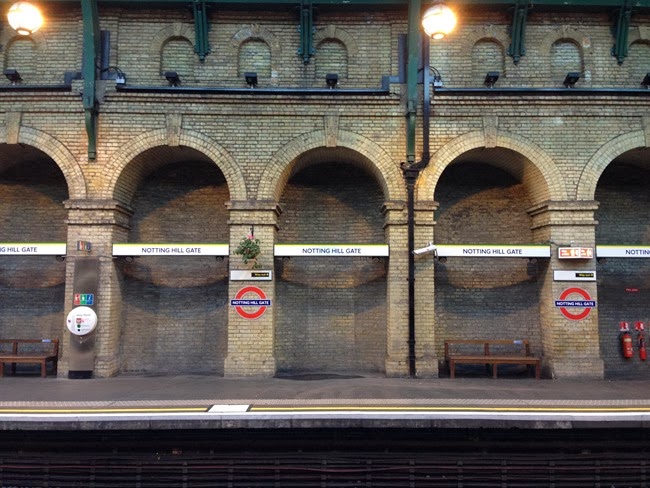 We got off at Westminster and made our way up the steps so that my family could take in their first view of Big Ben.  I feel like it was just yesterday – and at the same time, so long ago now – that I saw it for the first time, and I remember just how awed I felt.  Not every famous building lives up to the hype, but Ben does.  I made my mom walk across Westminster Bridge with me without looking, so that she could turn around and get the full view at the end.  I loved watching each of their faces as they took it all in. 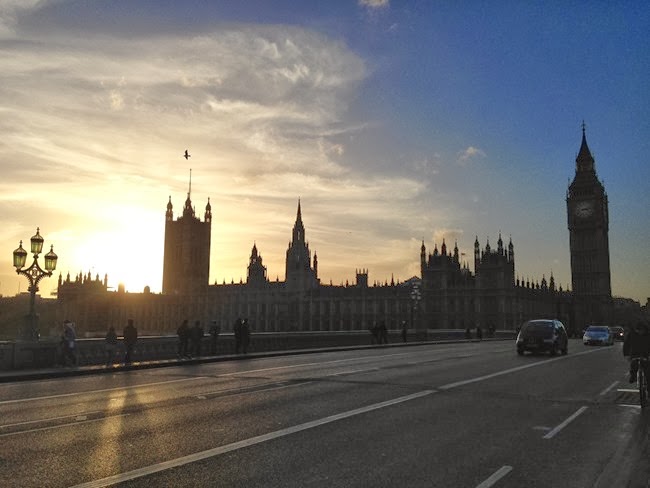 The sun was just beginning to slip behind Parliament and splash its colors across the sky (it wasn’t quite as dark as this photo makes it look, though).  We walked just a short way along the embankment to check out the London Eye from below before heading back the way we’d come. 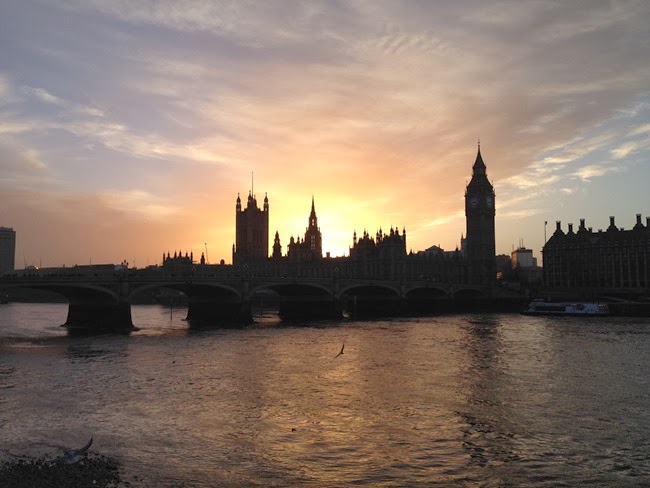 I will never tire of that view, because it never looks the same.

We made a quick pass past Westminster Abbey but didn’t linger for long, since by that point it really was getting dark and the energy in our group was dwindling quickly.

Instead, we caught a red double-decker at New Scotland Yard and my family got their second taste of true London transport.  Mom & Dad tried out the “driving the bus” seats on the upper level: 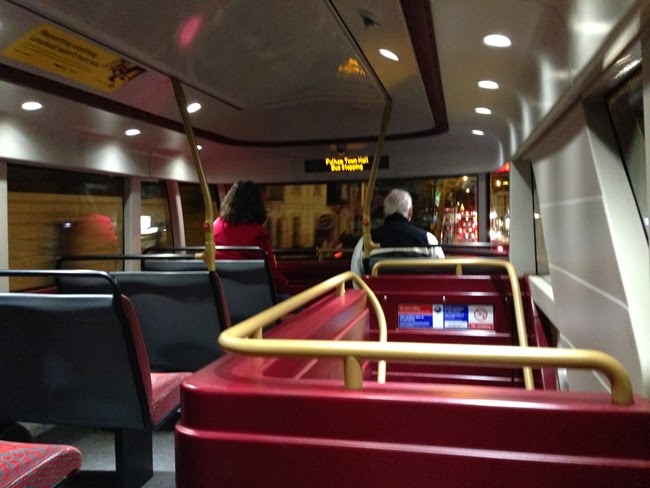 Paul and I dropped our parents off at their hotel and returned to my flat, where he didn’t last much longer.  I think they all got a solid ten or eleven hours of sleep that night.  Well deserved, for certain.

The next day was all about showing my family some of my most frequent haunts in London town.  We took the tube back into Westminster and did our own little walking tour of the LSE campus.  It was fun to give them a visual of where I am every day – all the places I work and study and eat that I’ve described over Skype or FaceTime but couldn’t truly show them.

While we were wandering around my school, we were sadly neglecting another priority of the trip, which my dad was quick to remind us of.  Let me give you a clue.  His suggested itinerary of their visit went like this: “porridge, pub, pub, pub – repeat daily.”  We checked the time and realized that it was, indeed, beer thirty (as it always is when you want a pint), so we crossed Fleet Street to check out The George, one of approximately eight million London pubs with that name, but the only one I’d been in before.  It’s sandwiched so tightly between its neighbors that it looks like the waterboy stuck between two linebackers on the football bench (American football, that is). 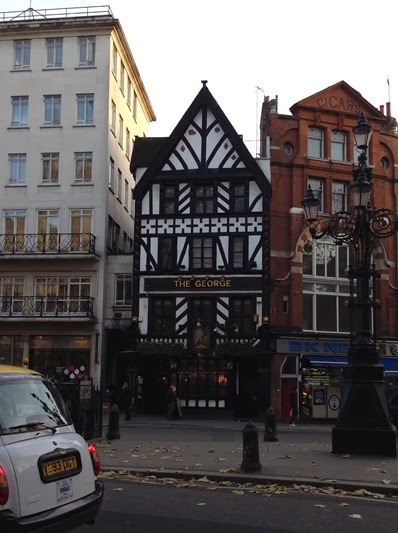 It’s a great place, all rough and hearty and wooden.  All the times I’ve been in there previously, it’s been packed at midday with retired guys swapping stories and guffawing and always, always suggesting that I need a little whisky in my coffee when I pass.  It’s just a perfect pub (case in point: someone has written “This way to the Ministry of Magic” on the wall above one of the toilets in the restroom).

We grabbed a table and spent an hour or so catching up and refueling for the afternoon.  My dad and I just needed Abby to complete our porter-lovin’ trio! 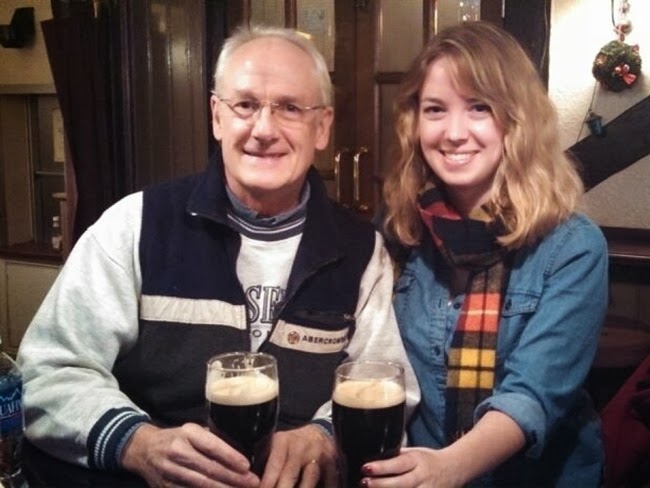 Eventually we carried on down the Strand, popping into Somerset House briefly as well as a few other shops and cafés along the way.  We made it to Trafalgar Square as the light started to wane and joined the mingling crowds in front of the National Portrait Gallery. 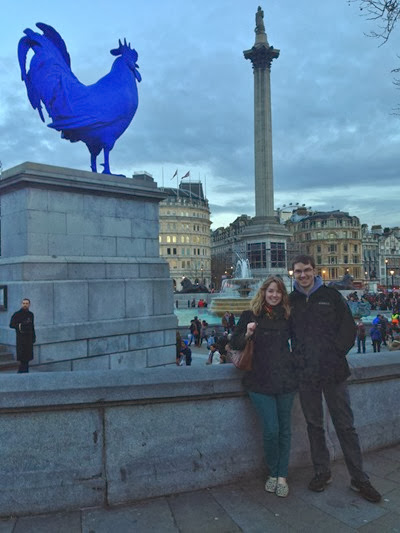 It was then that we realized we were starving, so we set off in search of food.  We walked up through the West End and ended up in a part of Covent Garden that I’d never wandered through before called Seven Dials. 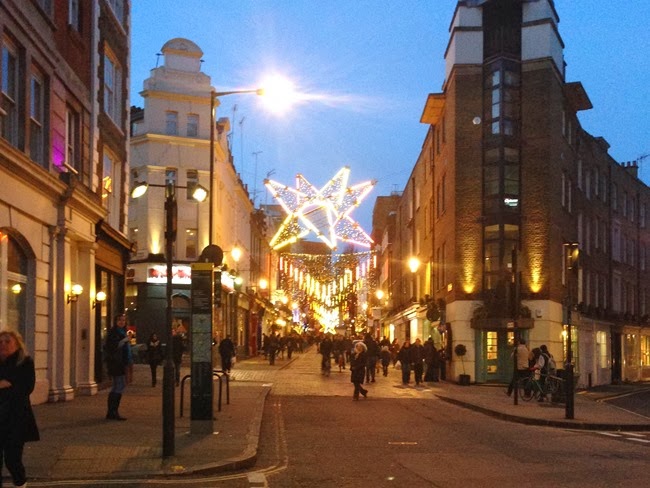 It was there that we found the absolute perfect spot for dinner – a restaurant called Kopapa, which is run by a New Zealand-born chef and specializes in Kiwi drinks & cuisine!  It had been three and half years since I’d tasted the sweet sweet nectar of Monteith’s crushed cider, and it welcomed me home with open arms. 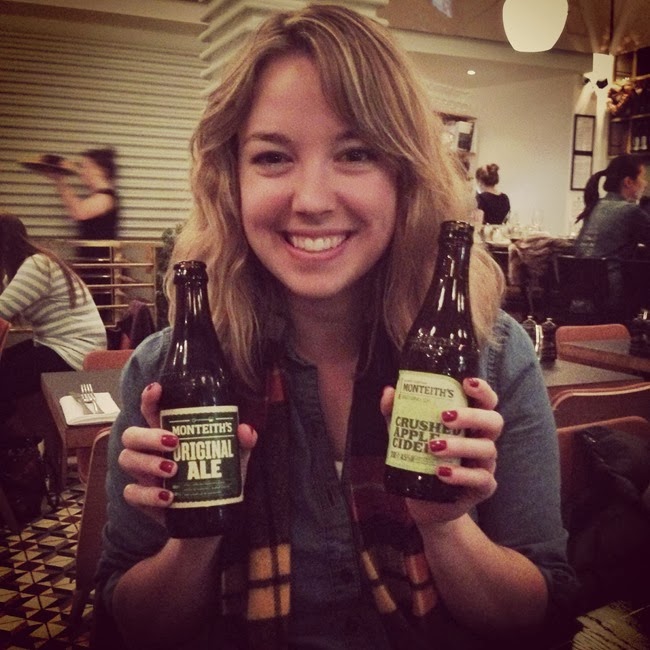 Little broseph got in on the fun, too! 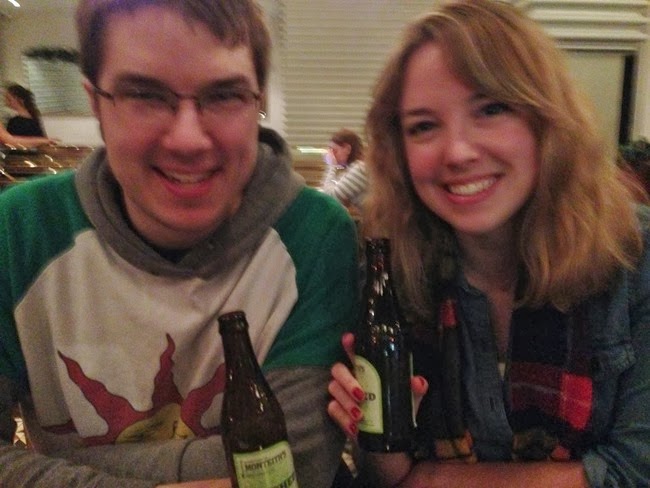 We all tried something different for dinner and gave our meals rave reviews.  I can’t wait to go back to Kopapa again sometime!

Following our stupendous dinner, we made our way through Covent Garden market, stopped to watch a busker ride his unicycle (among other things) for a while, and nabbed a box of Ben’s cookies (a London staple) to take home with us before we called it a night.

5 thoughts on “Mannings in London”