“We all belong to many countries.”

I thought I’d save my favourite (school’s started again so I have to get back into the habit of British spelling) Stevenson quote for this last Scotland recap.  I just loved this one.  It sort of justifies my entire life for the past few years.

I thought New Zealand would always be the only true love in my little black book of travel destinations, but it’s only been six months and I’m already pretty head-over-heels for London.  When Scotland felt so special to me, I honestly felt a little unjustified.  I mean, I was only there for six days, I couldn’t really claim much meaning for myself, could I? 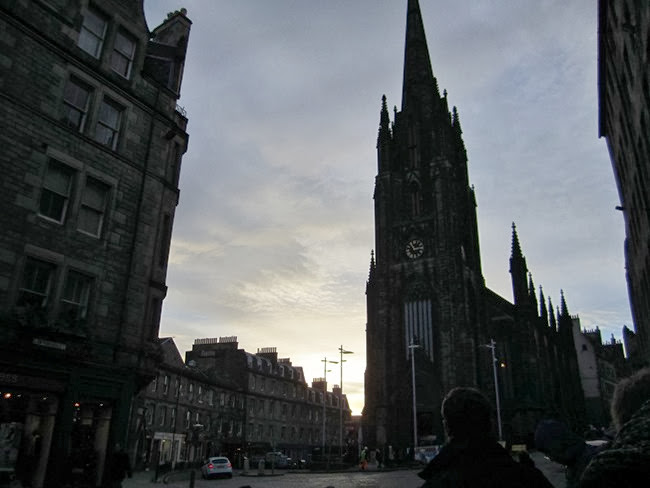 Amity and I went inside St. Giles’ Cathedral one afternoon during our time in Edinburgh.  I wandered off on my own and sat down in one of the little wooden chairs that line the aisles.  Staring up at the impressive ceiling, I had a thought that I have never been able to have in my life before: my ancestors were here.

I don’t have an extremely varied heritage.  It’s mostly German, some Scottish, and a wee bit of English.  This was the first time I’d ever visited a country where I could imagine that, hundreds of years ago, people to whom I’m related were living, working, and probably shearing sheep and practicing the caber toss.

Anyway, it was a really cool moment.  I loved that week in Scotland, and I made a quick little video like I did for our sailing trip in 2012, so that I can take you through the whole trip in just a few minutes.

Keep your eyes peeled for five different castles, some exciting cameos by Amity and Billy, and a bunch of really cute Scottish sheep (sadly, no Highland cows were captured on film).  The song is one that we heard many times on the radio while driving through the Highlands, and which will now always make me think of this trip.

Sorry if you’re seasick now.  There was a whole lot of filming while walking, filming while in the car (don’t worry, Amity filmed those parts), and filming while standing in gale-force winds.

‘Til next time, Scotland!

Catching up on Scotland posts?

Pssst… we’re not heading back to London town just yet!  I have a few more European adventures to recap on the place before we go back to business as usual.