One of my best friends and flatmates from New Zealand, Chelsea, makes these amazing composite videos by taking quick video clips during a special time or event (a summer at camp, a semester in New Zealand, etc.) and editing them together with music.  You may see her awesome video of her study abroad experience in New Zealand HERE (I totally copied her and made my own, but it’s not on YouTube).

I’ve always been in awe of her mad skillz with iMovie.  She does such a great job of capturing these special periods of time in her life, and using video clips adds so much more than just photographs.  You get to see people’s mannerisms, panoramic scans, changing light, and other things that still pictures just don’t convey.

I think Chelsea’s videos are an amazing way to remember a significant event, and as such, I have blatantly tried to copy her again.

You get to experience a week’s worth of our sailing shenanigans in three and a half minutes!  There are great views of the Baltimore skyline and Kent Island Narrows, tons of footage of Townes being goofy and adorable, and even Susannah and I breakin’ it down to “The Tiki Bar is Open.”  These are gems, people.

And of course, setting it to Mumford & Sons helps us feel even more like we’re still aboard the Bay Cat, because we listened to them so often (our benevolent captain was VERY patient – he is not the biggest Mumford fan, although he has since been overheard admitting that he kind of likes “Winter Winds”).  It’s perfect timing for our nautical tribute, since their new album comes out today!

If you’re catching up, here are our blog posts from the sailing trip this year:

I miss it already!

So, remember that last peaceful night we were hoping to spend onboard in St. Michaels harbor?  Yeah, didn’t happen.  This year, we had specifically decided to anchor out since we’d stayed docked last year and were banged against the pilings all night long.  Bay Cat does look quite stately in quant little St. Michaels, though, doesn’t she? 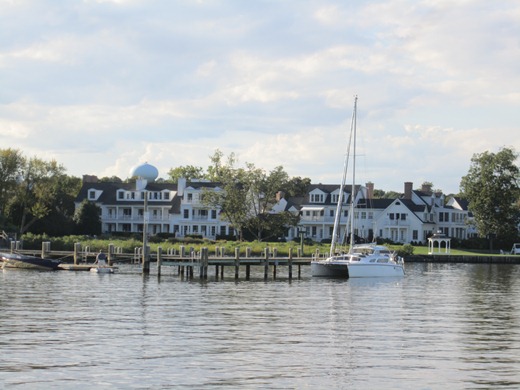 Anyway, going to sleep at our dreamy little anchorage in the bay was perfect… and short-lived.  The wind picked up barely an hour after we turned in and was relentless.  The downside to a catamaran is that, even though it doesn’t heel like a monohull, any rocking slaps against the underside like a giant hand constantly punching the bottom of the boat.  The table was jumping on its metal base, the boom was banging back and forth, and things were slamming around all night.  We got maybe a few hours of sleep between the four of us.

We were under way at dawn the next morning just to get going!  The wind shift overnight had totally changed the conditions, and we all had to pull out cozy pants and sweatshirts for the first time all week.  Luckily, once we hit our groove with the hobby-horsing the boat was doing, some of us were able to catch up on the sleep we’d missed out on. 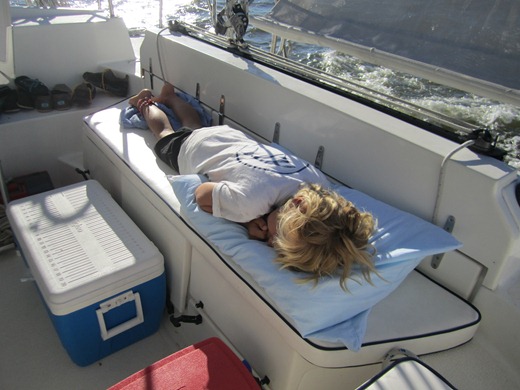 The wind direction was not in our favor for getting back to Annapolis, so we decided to cut out some of the open water travel by going back up through Kent Narrows (sadly, we passed through too early for a daiquiri stop this time). 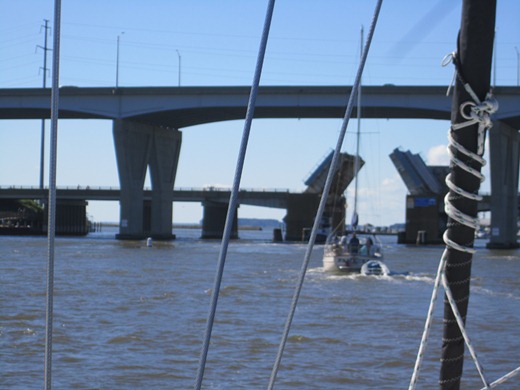 After passing through the narrows, we had to motor against the wind for the northbound part of our journey, which made things pretty rough.  Once we rounded the point and turned south to head down into Annapolis, things calmed down. 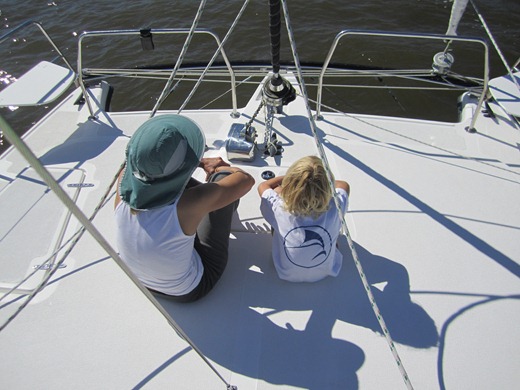 For whatever reason, our formerly-trusty Pandora stations (Mumford & Sons, John Hiatt, and Jimmy Buffett) turned traitor on us that day and started playing almost exclusively Alan Jackson covers.  Now, our taste in sailing music is pretty varied, but we’re just not country music people.  Can’t do it.

Other than being a little too twangy, our last afternoon on the water was an awesome one.  The sky was clear, the wind was good, and for some reason Townes really thought it felt like we were in San Francisco (where he has never been).  Maybe something to do with the Bay Bridge? 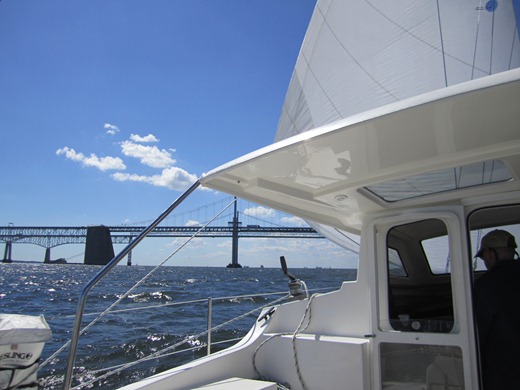 We finally arrived at the Annapolis Bay Marina and tried to pack up, unload, and clean up the boat at top speed.  It was hot, we were tired, and we had a five-hour drive back to the Outer Banks ahead of us.

Of course, it was bittersweet saying goodbye to the Bay Cat.  It definitely had its quirks (the singular gale-force air vent, the microwave at your toes – oh, and we never did figure out what that solar panel was for) but it had been home for a wonderful week of travel and adventure.

Let’s hope it’s not long until our next sailing adventure.  We’re working on coming up with some sweet as pirate nicknames and need opportunities to use them! 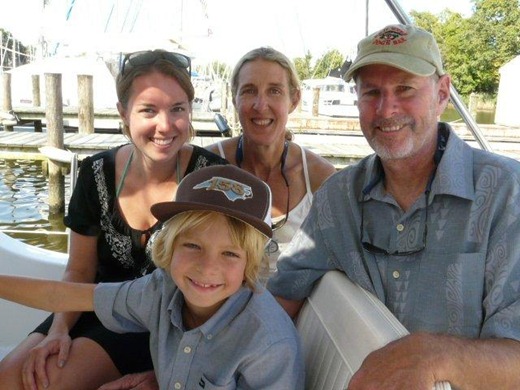 Susannah: “I hardly read my book at all this trip!”

Susannah: “Really?  What did you read?”

Townes: “Um, the back of the sunscreen, hand sanitizer, the cracker box…” 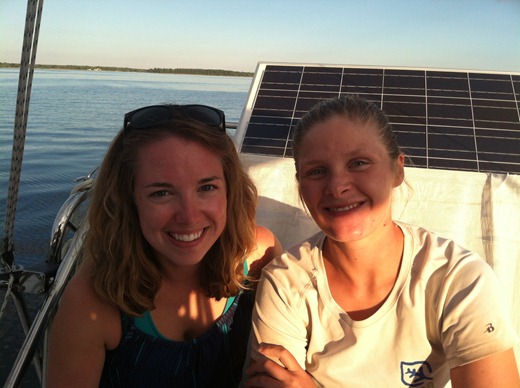 We are!  My reunions with Mikaela always pop up in the most random and unexpected ways.  But more on that later.  Also, please ignore my general sunburnt- and unshowered-ness in that picture.

Yet another picturesque morning on board the Bay Cat!  When we awoke, Rock Hall was perfectly calm and gave no indication of the previous day’s crazy storm. 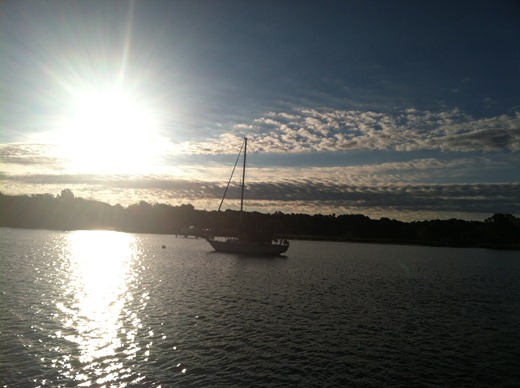 Sunday was a glorious day.  Our plan was to head south to St. Michaels and/or Oxford (my two favorite stops from last year’s trip).  The north wind was pushing us in exactly the direction we wanted to go.  We just had to hoist the sails, set our course, and let nature do the rest. 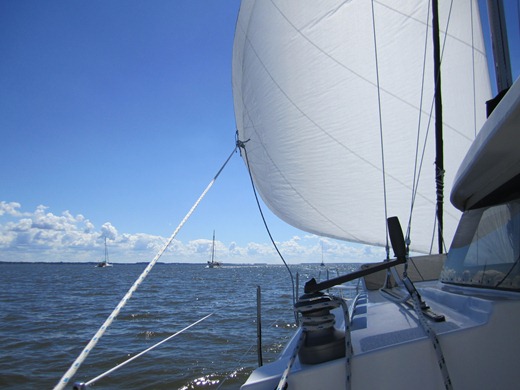 (FYI, for any non-sailors, that is a beautifully trimmed sail.)

We made a mid-sail stop for daiquiris while going through Kent Narrows.  Susannah and I had tried the daiquiris at one of the other dock bars along the narrows when we’d stopped on our way to Reed Creek, and they were upsettingly subpar.  So we gave up on trying new things and begged Paul to take us back to our favorite place from last year: Fisherman’s Crab Deck. 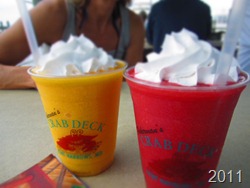 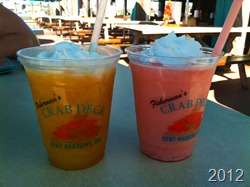 Anyway, our downwind run tapered off a bit after getting through the narrows and we lost some of the speed we’d been enjoying that morning, but we still made it to St. Michaels harbor with plenty of time left in the day.

In a deja-vu repeat of last year’s visit, we walked into town, grabbed a few necessary supplies from the Acme supermarket, and picked up some fresh fish from Billy’s Seafood.  Then, in the best repeat of all, my favorite Maryland resident/most excellent Kiwi flatmate joined us on board for dinner! 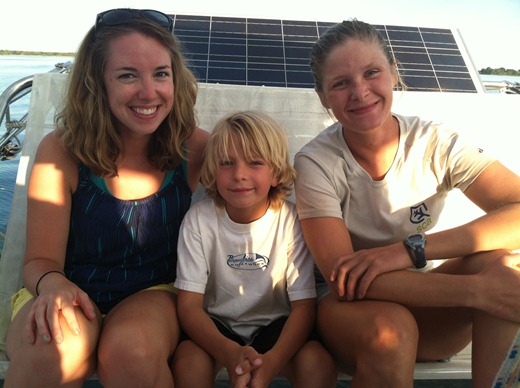 Townes looks WAY too cool for us in this picture.  In reality, he loves Mikaela and was almost as excited as I was that she was coming to meet up with us!  I love that my little cousin loves one of my best pals who lived with me in New Zealand.  Magical worlds collide.

The five of us enjoyed salmon from the grill and a beautiful evening on deck, while Mikaela and I got to catch up on most of the past six months (we hadn’t seen each other since she came to visit me in February).  Our evening together, which was also our last evening on board the boat, ended with a wonderful farewell: 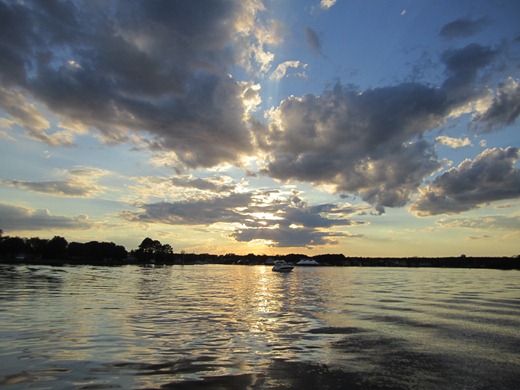 Is there anything better than that view?

Mikaela said it best when she texted me the next day that “our time together is always so short but so sweet!”  After living in the same apartment for five months straight, we’ll probably never be completely used to seeing each other only a couple times a year – but I’m still so glad that we get to see each other the times that we do!  New Zealand, New York City, St. Michaels, the Outer Banks… where should our next adventure be, Mik?!

After Mikaela hitched a ride back to shore, Paul, Susannah, Townes and I tucked in to our berths, sure of a peaceful night’s sleep at our serene anchorage because the forecast called for barely a breath of wind overnight.  Things turned out a little differently…

After being audibly… well, gassy… at dinner…