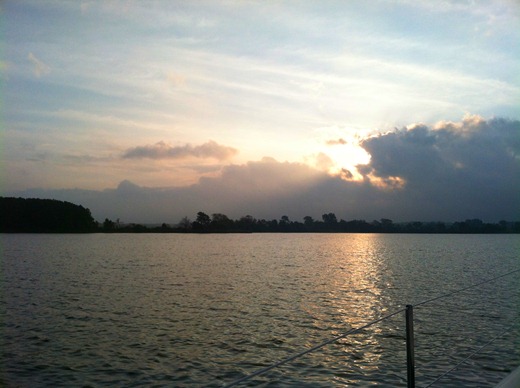 Other than a quick spot of rain and a mad dash by the captain to pull in all the towels, we had a very peaceful night at our anchorage.  We were the only vessel in sight this morning and felt like we had the entire inlet to ourselves.

We had a great south wind and set out planning to sail all day and make it to Havre de Grace by dinner time.  We planned a brief midday stop in Rock Hall to fuel up and pump out, but didn’t want to spend much time there.  It was the unanimous vote for least favorite stop last year, since the marina is grody and there was nothing to do but walk three miles roundtrip to the grocery store.

This time, though, we went twenty minutes further to dock in Haven Marina on the opposite side of the point, and it was like a different world!  We swam in the pool, walked around the gardens, and only just ran out of time to stop by the tiki bar!  We all proclaimed it to be Rock Hall: version 2.0. 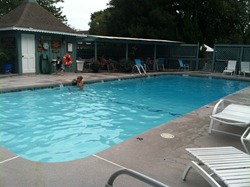 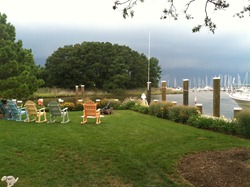 We had to hightail it back to where we’d docked the Bay Cat when some dark clouds started rolling in.  We were thinking we’d get some wind and rain, but within ten minutes it went from clear skies to looking like this: 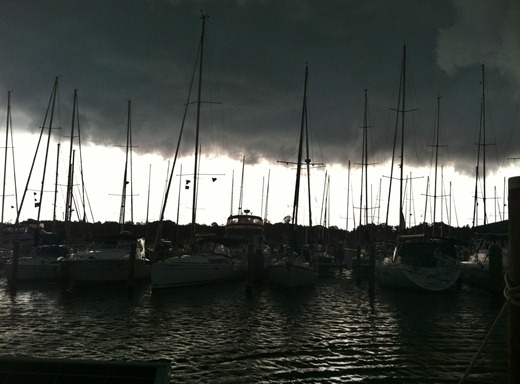 We scrambled to batten down the hatches and make sure everything was inside and watched the rest of our neighbors doing the same.  The rain opened up out of nowhere and quickly turned to hail with 35 knot winds – needless to say, we were very grateful that our captain had made the call to dock instead of anchor out! 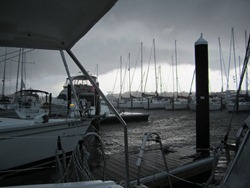 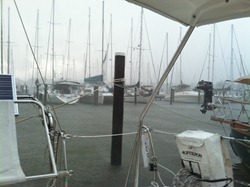 The worst of the storm blew past in about twenty minutes, and we spent the rest of the rainy evening feeling quite cozy in the better half of Rock Hall.  Bay Cat has a nice open cabin so we all sat around the main table blogging, journaling, drinking wine and GTG, and reading.

And of course, we were dutifully watched over by our guardian angel of the sea.  I don’t think we’ve introduced you to the mascot of our sailing voyage: 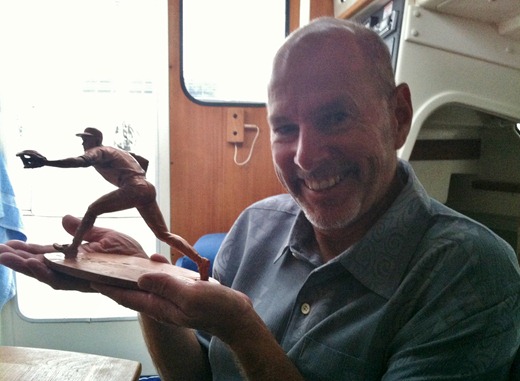 They were handing out these statues for free at the Orioles game because it was the anniversary of Cal’s record-breaking 2131st game.  We originally ended up with a few but quickly pawned them off when we realized that it was really cumbersome carrying a bunch of giant boxes around.  We just kept the one, and he has served us well.  We pat his head for luck and feel sure no harm can befall us as long as he is perpetually making daring catches on our galley table.

Townes even made him un petit chapeau out of a piece of bacon, and since everybody knows that bacon makes everything better, Cal is now pretty much unstoppable. 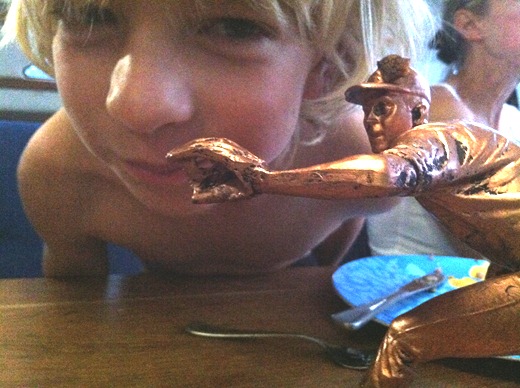 While having a minor meltdown because his burrito fell apart…

Susannah: “Townes, can’t you just put your burrito back together?”

Townes (sobbing and waving his tortilla in the air): “Yesss, I need some glue!!!”

I realize we’re a little behind (we had terrible luck getting wifi in port), but we kept up with writing our blog posts as we went so we’re just going to keep publishing as though this were real-time!

This morning was calm and quiet in Baltimore harbor.  In a newsworthy turn of events, I woke up first!  I read my book on deck for half an hour and watched the sun rise until everyone else got up. 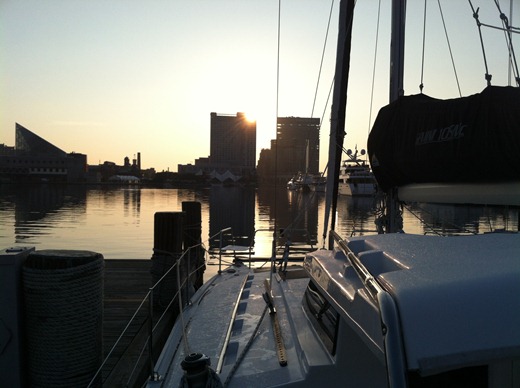 The forecast called for absolutely no wind, so we decided to just get back to the main waterway and then decide on a course for the day.  Townes took us out of the harbor and back into the Chesapeake.  We snapped a few photos of him at the helm and laughed when we realized that they look totally staged: 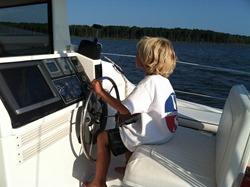 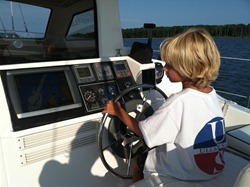 Nope.  He is actually monitoring the wind speed and GPS and steering the 35-foot catamaran along the correct compass heading all by himself.  This kid is legit.

Unexpectedly, the wind picked up really nicely for the best part of the day and we got some great sailing with all three sails at different points.  At one point, Paul went below decks to unintentionally flood the kitchen (oops) and came back to find that Susannah was sailing at 7.2 knots! 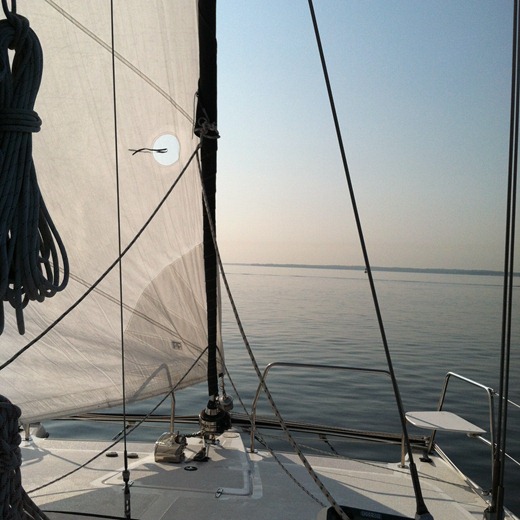 It got a little too fast and furious for Townes at one point so I read Harry Potter out loud to him (he’s just starting The Sorceror’s Stone).  It is an amazing thing to see a little kid who’s never read any of the Harry Potter books just beginning them – I’m so jealous!

We crossed the Chesapeake Bay, sailed up the Chesterton River, and are currently anchored at our final destination for the night in Reed Creek.  It’s lovely and rather isolated, and reminds me a little bit of our beloved Ball’s Creek anchorage from last year.  We spent the afternoon and evening fishing and swimming off the back of the Bay Cat.  Townes perfected the art of Tarzan yelling while jumping into the water. 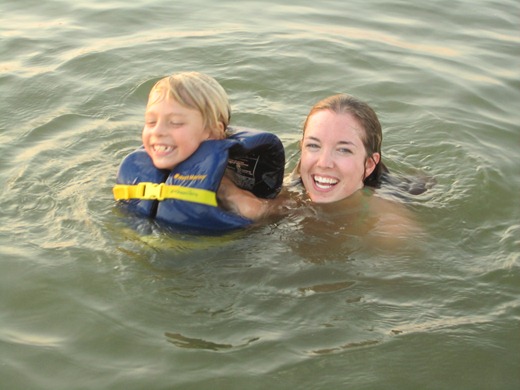 Floating heads.  Eventually we dried off and sat down for, as usual, a delicious dinner courtesy of Susannah (Thai quinoa with tofu, broccoli, cabbage, and ginger).  She continually gets excited about preparing meals that would terrify most people preparing to live on a boat for a week!

Our night wound down eating Oreos and watching YouTube videos.  Townes’ current obsession is “Rub Some Bacon On It,” and he’s really taken the message to heart.  In true Manning dad fashion, Paul has smashed the top of his head numerous times, and every time Townes has been quick with the panacea: rub some bacon on it. 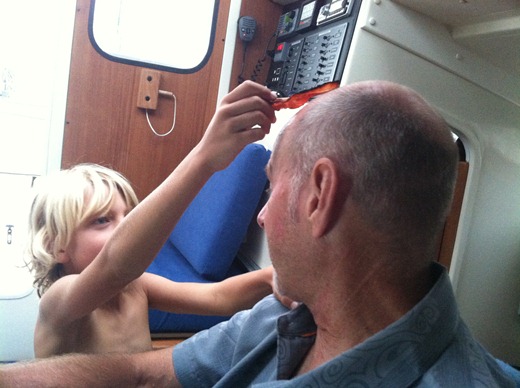 We’re about to read from our book of Outer Banks pirate stories before turning in!

An excerpt from his daily journal for second grade:

“Last night we went to an Orioles game.  It was fun.  Then the next day we went sailing.  I took the boat out.  It was fun!!!  Dad sneezed so loud that I almost jumped overboard.  It was funny!!  But we had a great time anyways!!”

Here she is!  This beautiful Gemini 105 Mc catamaran is our home away from home for the next week. 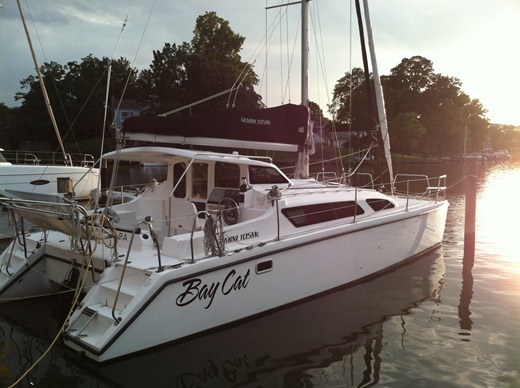 Yesterday, Paul, Susannah, Townes and I made the drive from the Outer Banks to Annapolis, Maryland.  For some reason, we entered a time warp and the trip took us hours longer than usual, but we eventually made it to our destination at Annapolis Bay Charters.

We stowed our gear and went into downtown Annapolis for our now-traditional pre-sail dinner of sushi and ice cream, before settling in to enjoy our first night aboard. 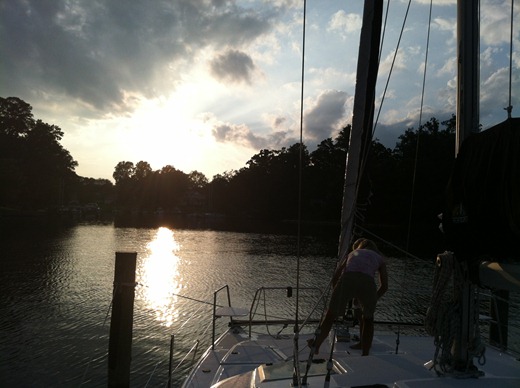 And because I know you’ve all been waiting for it (Carly), we would like to re-introduce everyone’s favorite segment, which highlights the most hilarious thing my little cousin Townes says each day:

In response to comments that his hair is getting rather long…

“If you give me a ponytail, I will shriek and regurgitate my dinner.”

This morning, we tied up all our loose ends while Marcus checked us out.  The captain and first mate made sure that everything was shipshape. 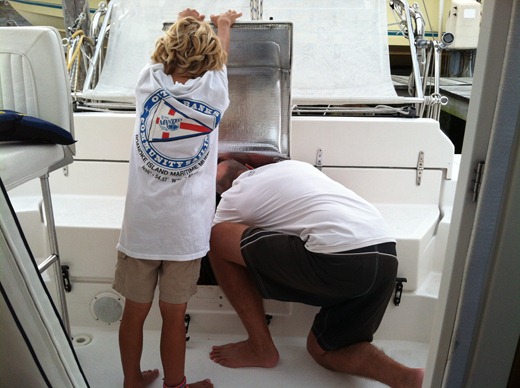 We set off under an overcast sky and some slight rain, but unfortunately not much wind.  We set a course for Baltimore and motored for the first little bit of our journey before the wind picked up to 15-20 knots and we were able to let the jib out.

Townes steered the boat for the majority of the trip today and did a great job!  It was funny to watch the people on a couple of boats that passed us realize that we had a seven-year-old at the helm.

We sailed for a few hours until the wind totally died again, and at Townes’ request, fired up the Iron Jenny to take us the rest of the way into the Inner Harbor.  It’s cool that Baltimore is our first destination this year, since it was the last destination on our 2011 trip.

We docked right next to our slip from last year and Susannah immediately took care of the important stuff: boat drinks! 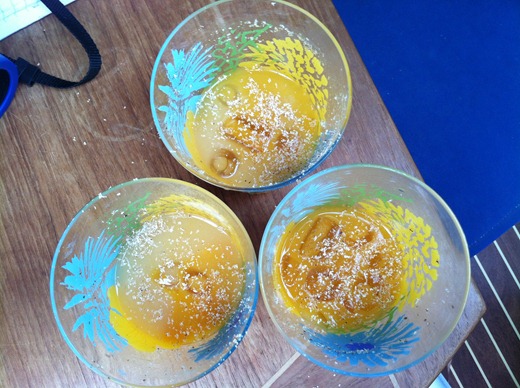 We were in the midst of enjoying a couple of those (not Townes, don’t worry) and a delicious home-cooked spaghetti dinner when out of nowhere we saw what looked like a moving apartment building gliding past our windows, immediately followed by a really loud BOOM and our boat shaking.  In fact, it was not an apartment building, but a gigantic cruiser being driven by two rather incompetent sailors, and they’d completely sideswiped us.  The wife also immediately started yelling at us.  Luckily, there was no damage to the Bay Cat… but not cool, people.  Not cool.

After that excitement, we disembarked and headed into downtown Baltimore to check out the evening’s main event: the Orioles vs. Yankees game! 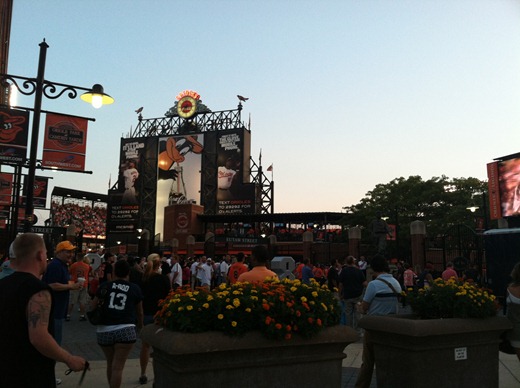 Oriole Park at Camden Yards is a REALLY nice stadium.  We were all remarking on how clean it was, and how easy to move around it was even though the place was absolutely packed to the gills.  We hadn’t gotten tickets ahead of time and ended up scoring some cheap nosebleed seats – perfect for us, since we were much more interested in seeing everything that was going on than in seeing it up close. 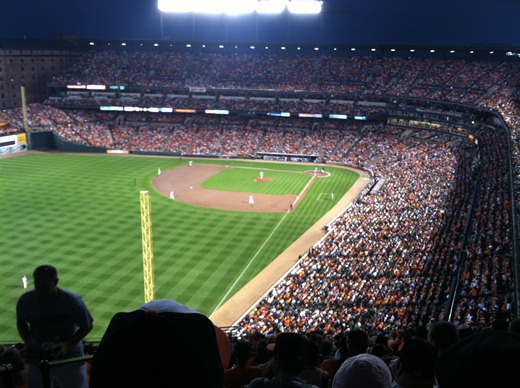 So much orange!  Fun fact: there were more people in that stadium than the entire population of Dare County.

The game was really fun (Orioles fans are INTENSE!  I do not think the Yankees felt very welcomed) but Townes got a little restless so we ended up skipping out after a few innings.  What we did see of the actual game was great, and it was fun just exploring the stadium and getting to see the energy of the crowd. 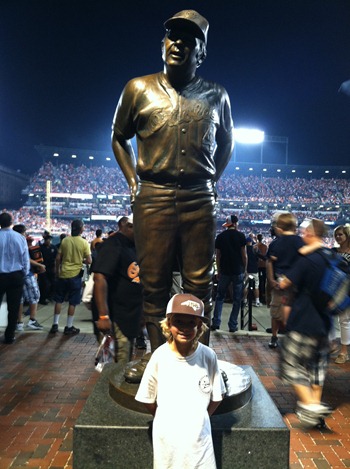 And now, we’re tired.  We haven’t decided on a course for tomorrow yet – the forecast calls for north wind, so we’ll see how that holds in the morning.  Who knows where we’ll be blogging from next time!

While singing Adele’s “Rolling in the Deep:”

“We could have had it badder

We rolled in the deep pee

You had my heart, it’s fatter

But then you took it away”