There’s nothing like the Christmas season (festive period, I mean) to make me quite sure that I will never get over missing London.

Not that there was really any doubt. I still haven’t unsubscribed from the TfL Weekly Updates emails, even though there is no reason for me to know which tube lines aren’t running and which Boris Bike stations are closed.

But anyway, I’ve been feeling especially nostalgic lately about London at Christmastime, and I realized there was one bit of it that I didn’t share in last year’s “Christmas in London” post. I thought this week would be a good chance to take a quick break from roadtrip posts for a bit of holiday cheer!

As you might guess, it takes place in my favorite spot in London – Southbank. Come November, a full German-style Christmas market springs up along the Thames, vending everything under the sun.

The first time Amity and I discovered it was right after we’d gone to see a production of Much Ado About Nothing at the Old Vic, starring James Earl Jones. His voice was just as good in person as you’d imagine it to be.  You could tell he was only speaking at conversational level, yet his voice boomed around the entire Death Star theatre as though he was using a megaphone!  I loved it. 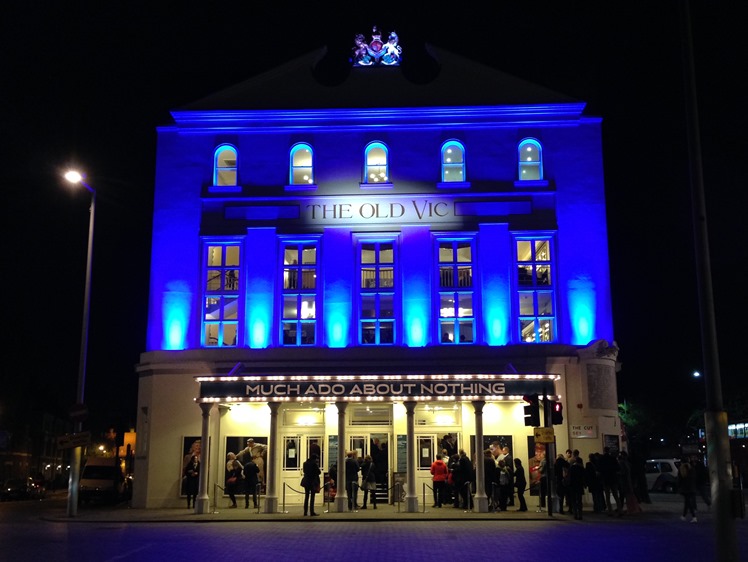 We decided to walk up to the river after the play was over, and we discovered the Southbank Christmas market. I went back a handful of times later on, after or between classes, since it was just over the bridge from LSE. I basically couldn’t get enough.

First of all, the entire place is draped in fairy lights! 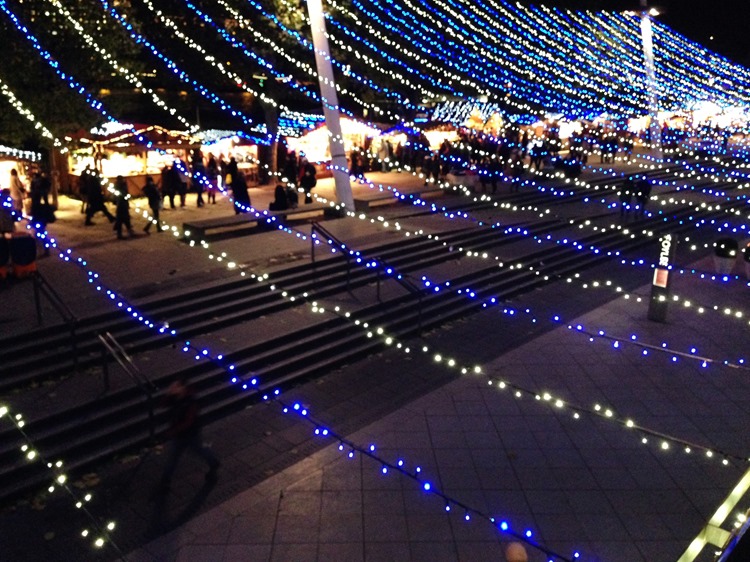 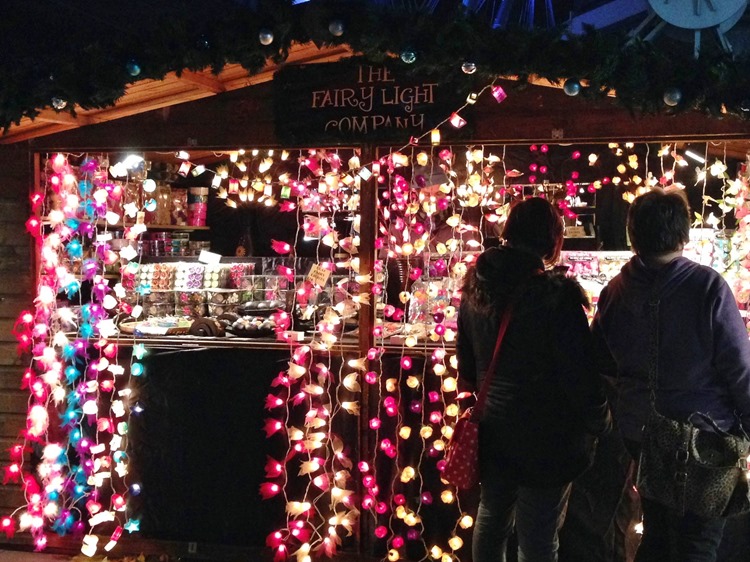 The spread is pretty diverse.  There are, of course, roasted chestnuts and hot chocolate (did I mention Bailey’s hot chocolate? HELLO.), as well as plenty of stalls selling sweets, fudge, and all manner of warm gooey desserts. 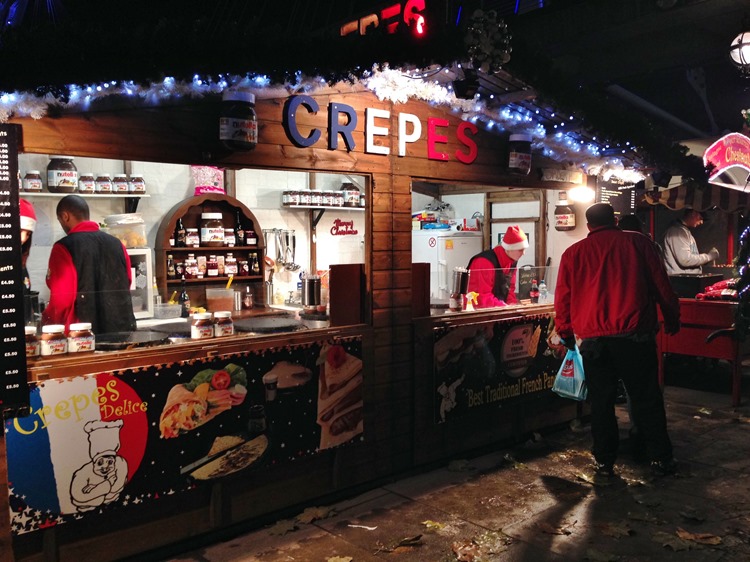 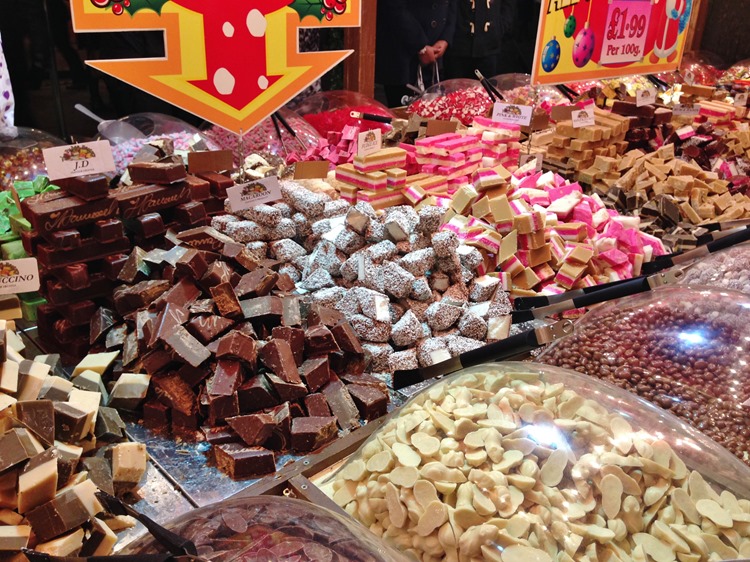 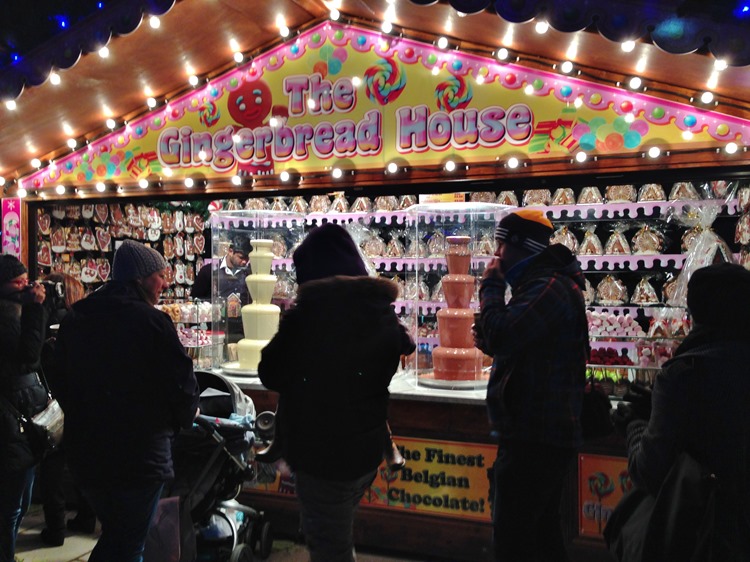 One time last year, Nausheen and I wandered over with a couple of hours to kill before our pub quiz night. We split a handful of hot chocolate samples and picked up a few holiday gifts for family. I loved these handpainted candles with scenes from all over the world on them, and the “smallest book in the world” stall which had holiday classics printed barely larger than a postage stamp (pretty sure it was leftover Flourish & Blotts inventory).

Past the snacks & goodies, there’s a magical lit-up carousel before you start smelling the mulled wine and hot cider. That’s when you know you’re getting close to dinner… 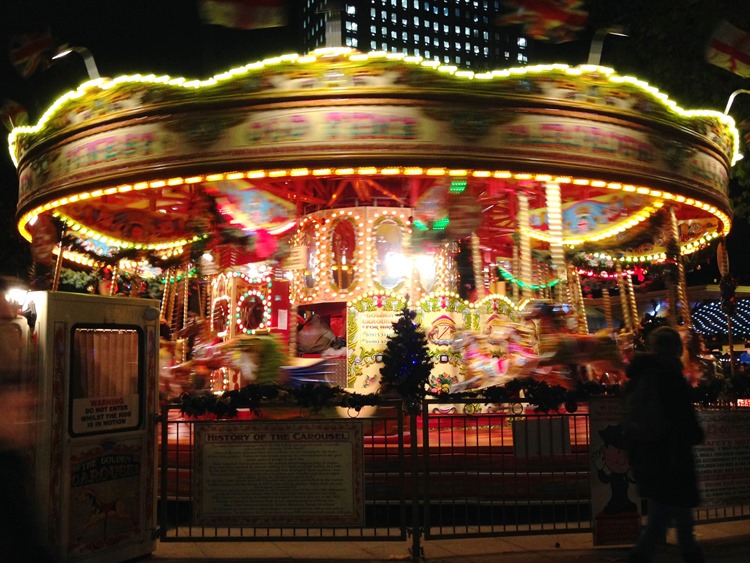 Nausheen and I got sucked over to one of the stalls that had steam billowing out from under the eaves, and found skillets the size of car tires overflowing with sausage and stuffing. 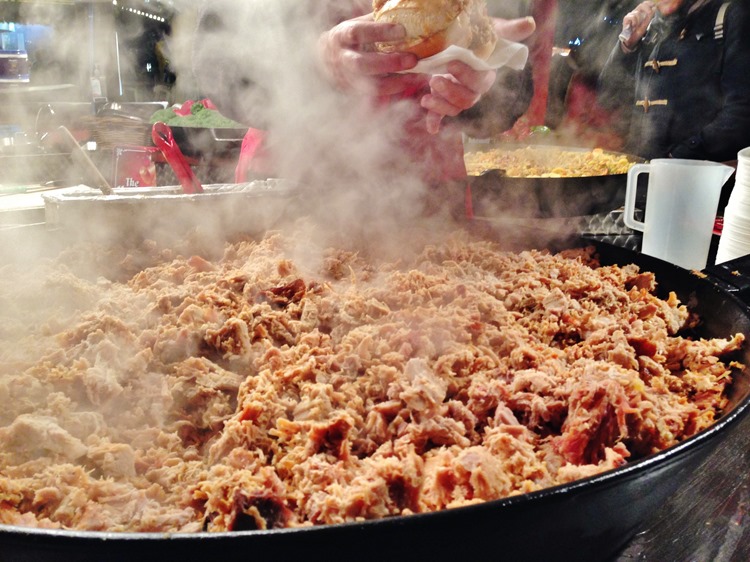 She went with brisket on brioche and I had the turkey dinner sandwich, which was stuffed so full that I trailed shredded turkey behind me all the way back across the bridge. Ah well. 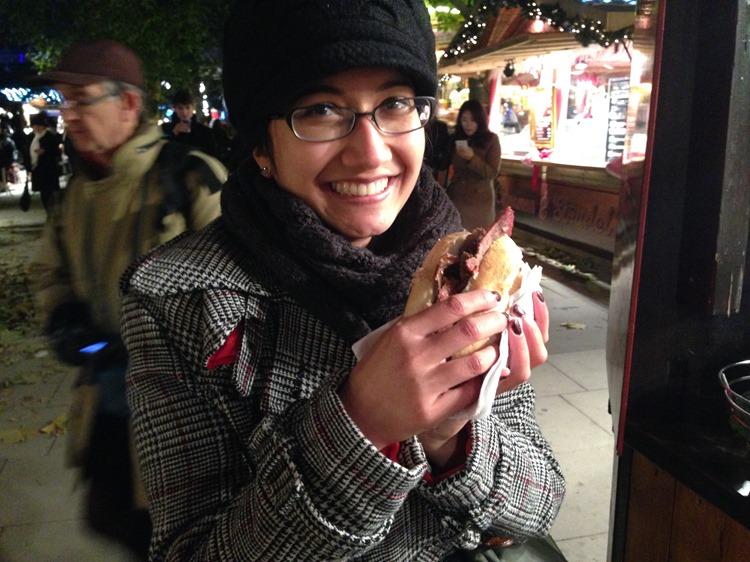 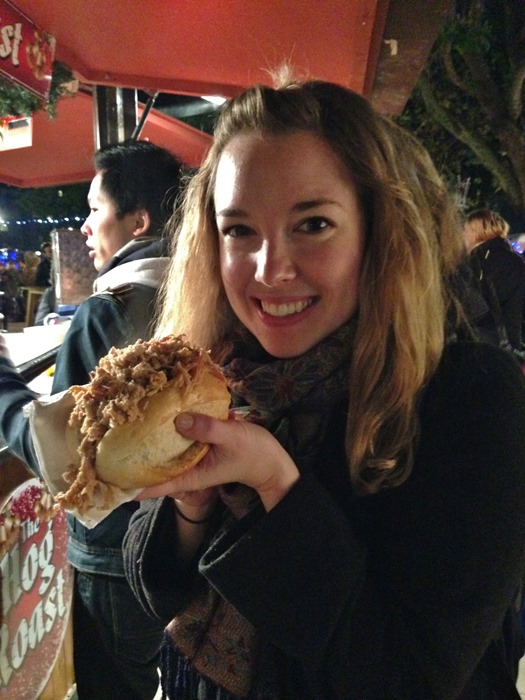 After walking up the steps to the Golden Jubilee Bridges, we stopped for a last glance back over the twinkling roofs with hoards of happy holiday folk roaming among them.

Of course, this was last year’s Christmas market. I’ve heard from friends and former classmates that it’s been arranged a little differently this year. Whatever the setup, I’m craving some peppermint cocoa and glühwein straight from Southbank. Londoners – go have some for me, okay? Today’s your last chance! And for more ideas on how to spend the holidays in the British capital, check out Jen’s guide to Christmas cheer in London.

I’ll be comin’ at ya with more western roadtrip excitement soon. Until then, Happy Christmas y’all!

Summer in the city is anything but restful and relaxing.

On the contrary, the fleeting sunshine seems to send everyone into a frenzy of energy and excitement, and London kicks into high gear.

July felt like a whirlwind, but the main event was that my dad came back to London for his first visit since he and the rest of my family were here over New Year’s.  We packed his ten days to the gills with London excitement.  I’ve been wanting to share the details of his visit with the fam, as well as the best parts of London summers with my fellow Anglophiles out there – luckily, they line up pretty perfectly!

You are positively spoilt for choice when it comes to music in this town.  If there’s an act playing anywhere in the world, you can pretty much bet they’ll have dates in London.

Due to a slight scheduling miscommunication, I ended up abandoning my dad in my flat for his first evening back in London while I trekked over to the O2 in Greenwich for the show of a lifetime: 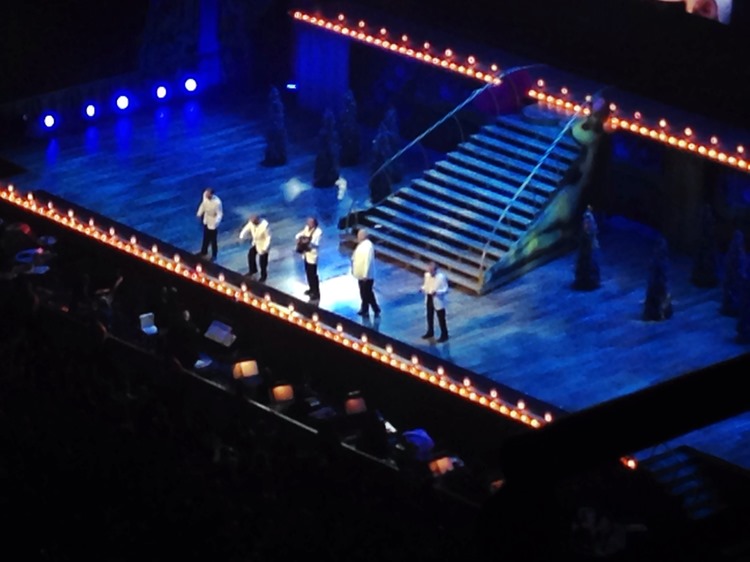 The five remaining members of Monty Python put on a once-in-a-lifetime reunion tour cheekily titled Monty Python Live (Mostly), or One Down, Five To Go.  It was a hilarious evening, and seeing the dead parrot sketch and The Lumberjack Song performed live was an opportunity that won’t ever come round again!

There are plenty of incredible but fleeting entertainment events like this in London, so be sure to jump on them if you have the chance!

Food trucks.  Festivals.  Pop-ups.  Traveling markets.  There is no lack of good eats come summertime in London.  Some of my favorites are Street Feast (weekends in Dalston) and KERB (Saturdays at Kings Cross and the first weekend of every month at Southbank).  I’ve followed KERB to Southbank a fair few times to stalk Batch Bakery for the delicious brownies of my dreams.

Speaking of Southbank… I am in love with it.  You already know this.  My dad’s first full day in London brought us there to enjoy the gorgeously sunny afternoon and one of my favorite of all London food trucks: BOB’s Lobster. 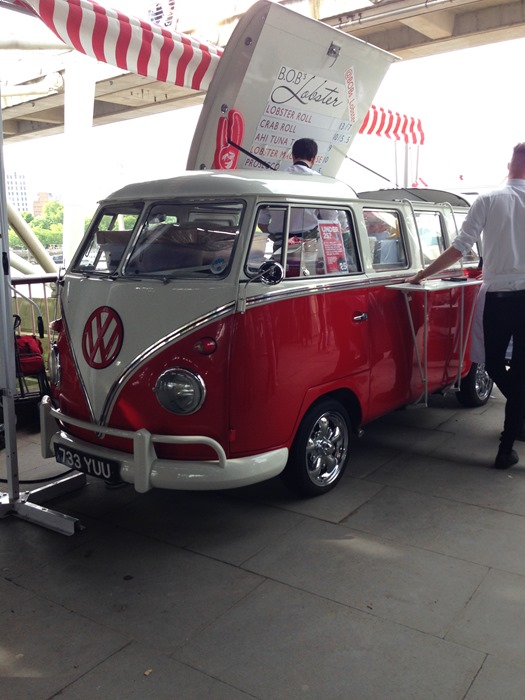 They have a pop-up as BOB’s & co. above a pub near St. Paul’s which I’ve gone to a few times (once when Kate was visiting in March), but the summer months find them under the bridge at Southbank in an old red and white VW bus, serving up the same amazing lobster rolls and ahi tuna tacos that we all know and love.  Also, their only beverage offering is prosecco, so you know they’ve got respectable priorities.

There are plenty of tasty options in the city that I never even got to – check TimeOut London for what’s on any given day!

Without hockey or much of a ski culture, there’s a bit of a lull in the British athletic calendar during the winter, but there is no shortage during the summer.

One of the main reasons for my dad’s visit was to see the Tour de France race through London, which we did on a beautiful day along Victoria Embankment (much like the Tour of Britain in the fall).

Later in the week, my dad and I camped out in a pub in South Kensington for an entire afternoon, watching the Wimbledon men’s final on their TV while simultaneously keeping up with the Tour de France stage and the Formula One qualifiers on our phones (when I said goodbye to him at Heathrow, he told me I was a great son).

This summer was even sportier than usual with the World Cup going on – and let me tell you, there is no better place to watch World Cup match than in an English pub.  None. 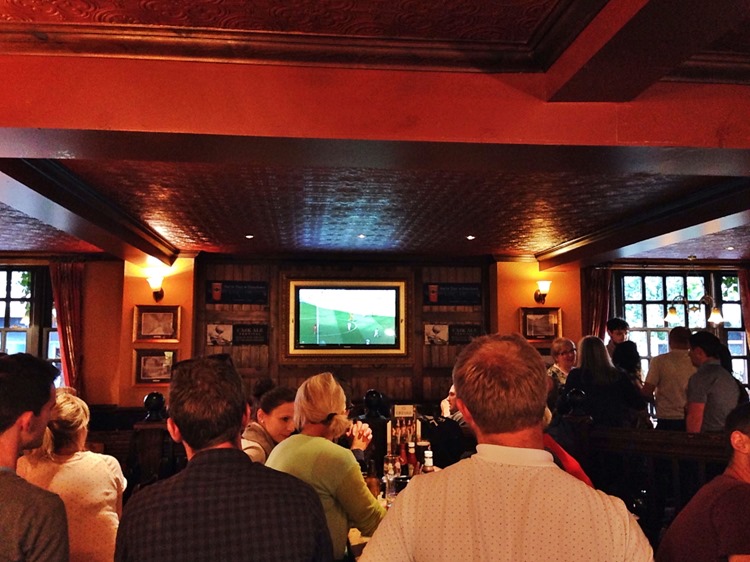 The weather in London is magnificent during June, July, and August.  To be honest, I’m a fan of it the whole year round (What a weirdo! I hear you shout), but nobody can argue with sunshine and mid-70s (low-20s if you’re in Celsius).  Aside from the occasional summer shower and even more occasional thunderstorm (which I love), it’s simply lovely.

My dad and I hopped the District Line west one day to check out the more adventuresome side of Kew Gardens.  When I visited with the Higgins’ in April, the flowers were at peak bloom – we were a little past that in July, but I knew my dad would be even more in to the Treetop Walkway. 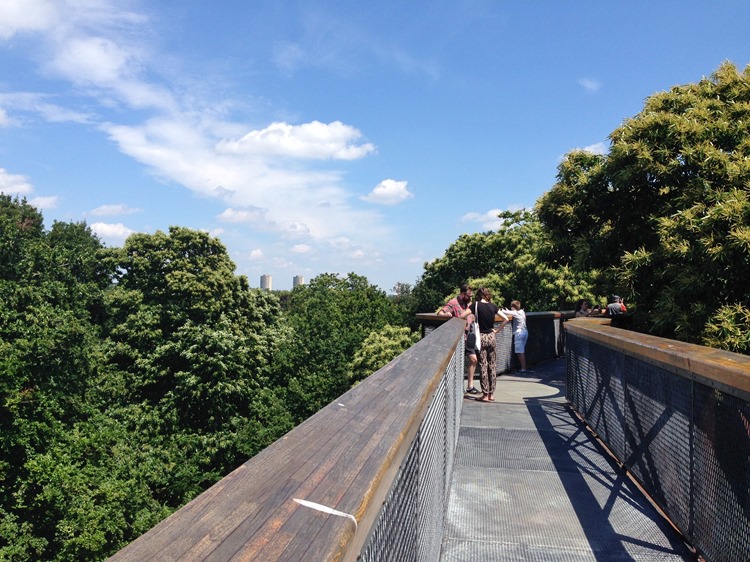 The walkway is 18m/60ft high and lets you walk through the canopy with a bird’s eye view of the gardens and greenhouses. 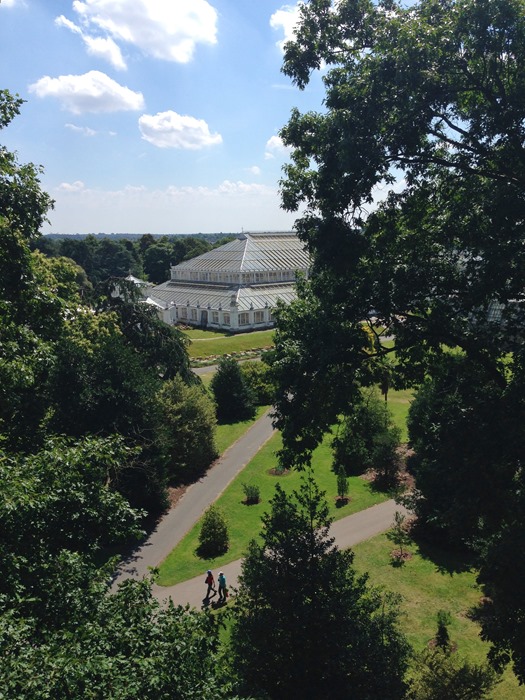 Everything was green and lush, and we spent the next few hours wandering through the half of the gardens that I hadn’t gotten to previously. 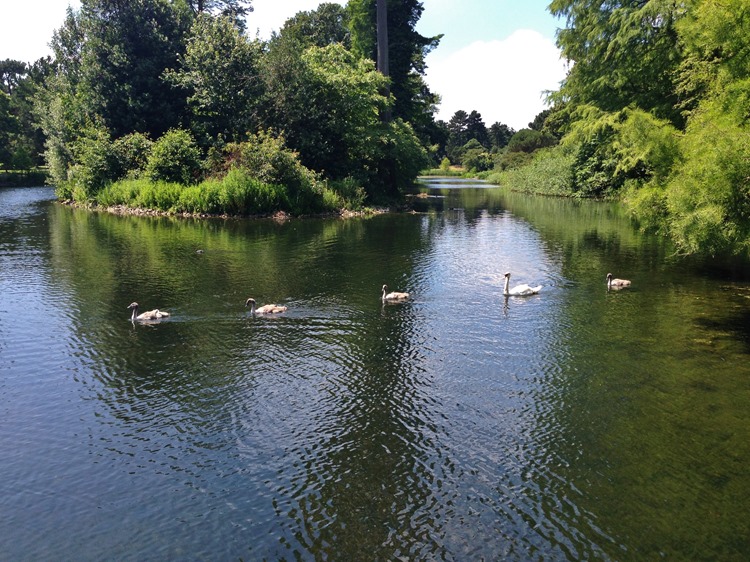 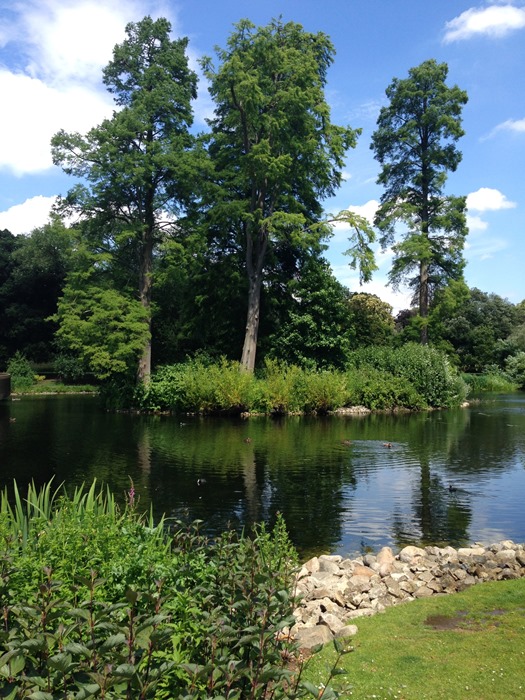 London is the greenest city of its size in the world, and there’s no better time to take advantage of this than the summer.  Other beautiful outdoor spaces include Regent’s Park, Hampstead Heath, the awesomely wild Richmond Park (I’ve not gone myself, but apparently wild deer sightings are commonplace!), and, of course, Kensington Gardens & Hyde Park… among many, many others!

It’s hard to go wrong if you’re in London during the summer.  It’s just so spectacular.  Catch a show, find some great street food, watch a match in a pub, and get outside – this is just a start for making the most of it!  My dad and I had a few more adventures, posts still to come (hint: we skipped out of Great Britain but not the British Isles…) but our time within old London town couldn’t have been better. 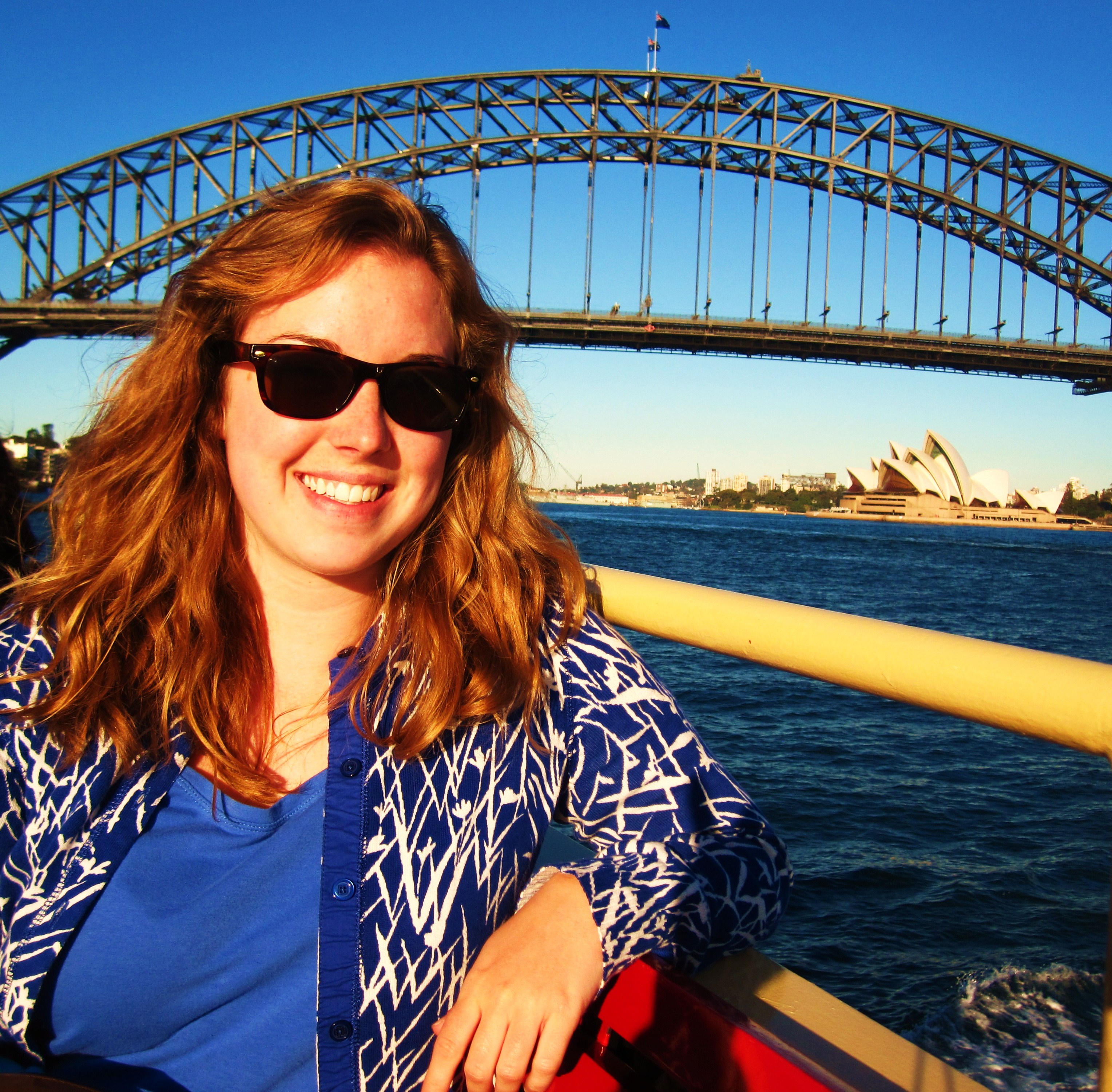