Well, we made it!  We may be a little worse for the wear, but we made it through Hurricane Irene in… maybe not one, but a few solid pieces.  Let’s go back to the calm before the storm, shall we?  If you recall, by last Thursday evening (the hurricane was scheduled to hit us on Saturday morning), the tourists (and some residents) were evacuated, the businesses were boarded up, and the crazies who were stickin’ around were stocked up on the necessities to ride out the storm. 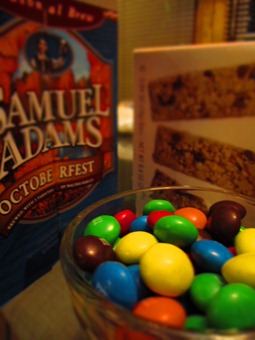 Sarah had previous plans to work in Charlotte for the weekend, which left Irie and I to hold down the fort at home.  I ended up having Indre and Milda come stay with me because they live on the beach road, and anywhere that close to the ocean is generally rocked pretty hard during hurricanes.  This made them feel much safer and less anxious about the storm, and also gave me some human company, which I was glad of!

Friday, the day before the storm, was a weird one.  First of all, the Outer Banks was an honest-to-goodness ghost town.  The bypass was virtually empty, and the girls and I took Irie on a long walk around the neighborhood without seeing any human life besides a couple of preteen skimboarders.  It was partially eerie and partially AWESOME!  It felt like we had the entire OBX to ourselves.  Add that to the fact that there was that odd bright-but-cloudy breezy humidity that usually precedes a big summer storm, and it felt like some zombie apocalypse movie come to life… minus the zombies.  Even though we knew there was a hurricane scheduled to hit us within twenty-four hours, we spent the afternoon walking around and stretching our legs out before being cooped up inside for who knew how long.  Ironically (given the focus of the storm), the sound was super calm and the beach was pretty rough. 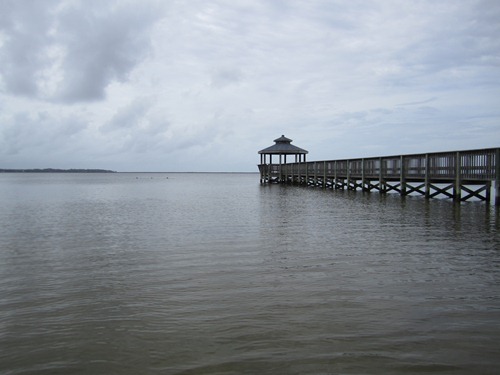 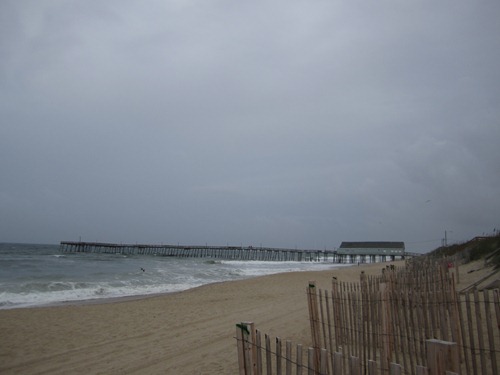 By Friday night, the wind had started to pick up and it really felt like a storm was a-comin’.  It was a little creepy going to bed with the house creaking and rattling around us, but the Palmetto Palace is solid enough that I wasn’t really worried.

I woke up around 3:30am (Friday night/Saturday morning) and quickly realized that it was because I was a hot sweaty mess.  Further inspection and creepin’ around in the dark revealed that our power was out, and the fans and air conditioning were therefore not working.  At that point, I resigned myself to the fact that getting through this storm was going to be a VERY long haul if our power had gone out when the storm was still eight hours away.

I didn’t sleep too much after that and ended up giving it up as a bad job around 7am and getting out of bed.  The wind was really howling by that point and it had started to spit a little, so I double-checked that I hadn’t left any chairs out on the deck and that Perry was pulled as far under the house as he could get.  Indre and Milda got up a couple of hours later, and we amused ourselves by playing a ferocious few (hundred) rounds of Uno and roasting marshmallows for s’mores over tealight candles, which were all we had.  Lemme tell ya, that takes a loooong time… unless you just get impatient and light your marshmallow on fire to roast it faster, as was my general strategy.  Sidenote: I LOVE MY NEW CAMERA!!  Exhibit A: 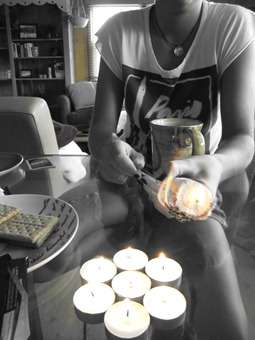 Around 10am, the electricity came back on, so the three of us made a mad dash to flush the toilet and turn on the coffee pot (we’re classy, I know).  As the power went on and off pretty consistently over the next few hours, we kept this pattern going, ensuring that we at least had the bare essentials to go on – because what more do you need than a clean potty and a cauldron full of hot, strong love?

Around two o’clock Saturday afternoon, the electricity came back on for good.  Strangely, we’d lost power before the storm really got bad and got it back just in time for the worst weather – the opposite of what you’d expect (and what most of the rest of the OBX was experiencing!).  With electricity – which meant AC, a working refrigerator, and a consistent laptop charge, weathering the hurricane for the rest of Saturday was downright pleasant!  Indre, Milda, and I cozied up for our own Harry Potter movie marathon and made an impressive dent in our stockpile of rations (can you believe they’d never had peanut butter M&Ms before?!).  Once we started going stir crazy, we made a few quick forays outside to take pictures and record some hilarious mock newscasts.

It was pretty darn windy, but really not raining much at all.  The storm surge had done a number on the sound, though – it had sucked all the water out of it that morning, and shoved it all back in that afternoon, so that Bay Drive and most of the extended side streets were rapidly flooding. 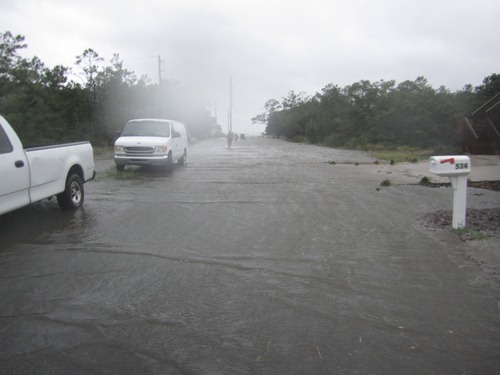 By Saturday night, the flooding had crept up past the end of Palmetto, and it was time to move Perry out of harm’s way.  We moved him and Sarah’s Jeep (she’d gotten a ride to Charlotte) down to Front Porch.  Running up and down the street at ten o’clock at night in full-on hurricane conditions was cool in a “this is Storm Tracker Bruce’s wildest fantasy” kind of way, but a little creepy!  The flooding finally peaked about four houses away from mine – talk about lucky.  The wind kept getting stronger and stronger and the chandelier in the living room was swaying ominously.  I imagined a miniature-scale Phantom of the Opera scenario where our goofy and totally out-of-place fancy chandelier fell down and crushed the coffee table and I got to dramatically sing the theme music… but no dice.  We all hunkered down together in the living room with (some more) hot coffee and a(nother) good movie.  Irie was king of the air mattress and wouldn’t let anyone else share it with him, but he was a good sport through the whole ordeal so I figured he’d earned that right. 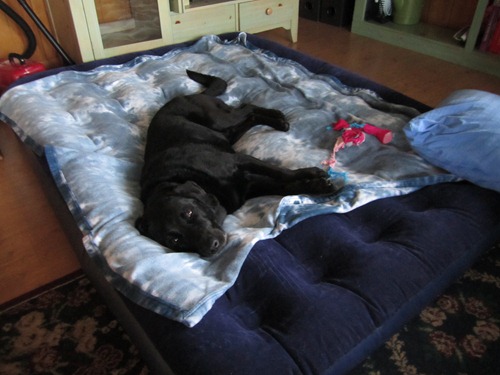 Going to bed on Saturday night was definitely the scariest (really the only truly scary) part of the hurricane.  The house was rockin’ and rollin’ pretty consistently by that point – it still felt solid and I wasn’t worried about Irene huffing and puffing and blowing it down, but there was just nothing else to concentrate on while I was lying in bed trying to fall asleep.

At that point, all the boarded windows on neighboring houses seemed intact and the aftermath of the flooding wasn’t yet apparent.  We woke up on Sunday to the official Day 1: After Irene, but that’s a whole other post, which I’ll be back with in a couple of days!