Happy May, everybody!  Better nine days late than never, right?

This past weekend, I flew to New York for the third time in less than two months, after Sara’s bridal shower in March and Sara’s wedding in April – yikes!  I will tell you for certain that I would be quite happy not to set foot in an airport for a while now.  However, the endless air travel was totally worth it, because this visit was for something not at all stressful, and just wonderfully, wonderfully happy: I went back to college!!

I hadn’t been back to visit Geneseo since I graduated almost a year ago, and it was long overdue.  A lot of friends from my year stayed in the Rochester or Buffalo regions, or at least in New York State, and have been back to Genny a bunch of times for events or just for fun.  Needless to say, I have been insanely jealous every time I’ve seen a Facebook status about somebody going back to our college town, and I knew I had to get back there before graduation this year!  I have a lot of wonderful friends who were a year younger than me, or are in grad school at or near Geneseo, or are close enough to come back for the weekend, so there were a lot of good reasons to get back before this semester ended!

So I booked my tickets, and last Thursday I flew on up and was greeted in incredible fashion at the airport by my dearest friend Emaline. 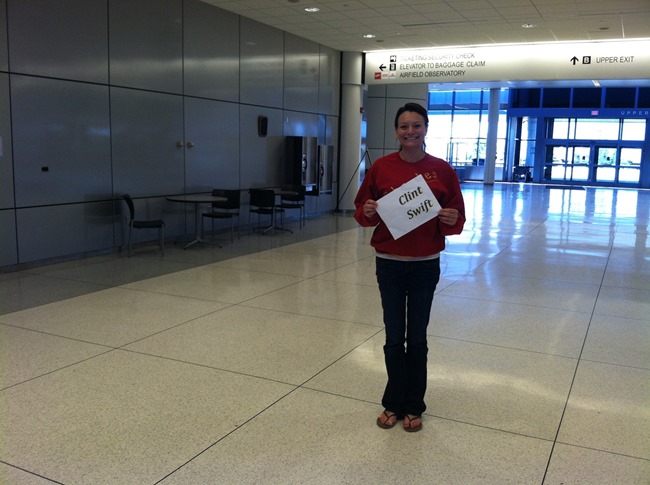 Two and a half years later, we still take every chance we get to wear our Halloween costumes from 2009.  Usually in public.

Emaline is currently in grad school at the University of Rochester and has a super cute little apartment in the city.  We dropped my stuff and quickly headed out to enjoy the sunshine on a walk through Highland Park – as luck would have it, I arrived the day before the Rochester Lilac Festival began! 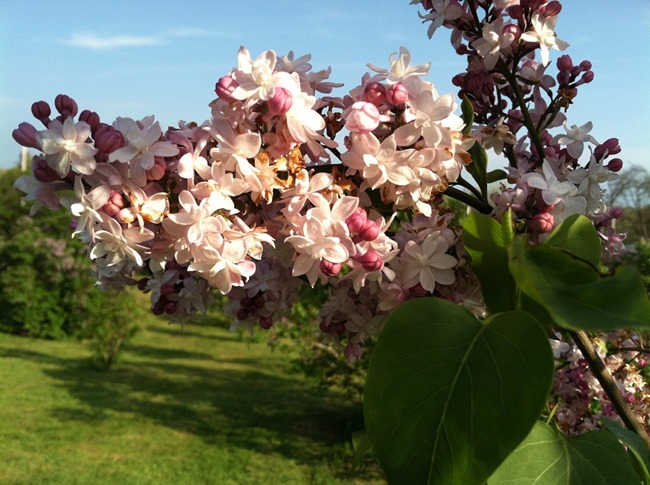 The Lilac Festival is a huge annual event, and it was so much fun to see the park in bloom again!  I went to the Festival every year of college except for junior year, ever since my roommate, Carly, took me during our freshman year! 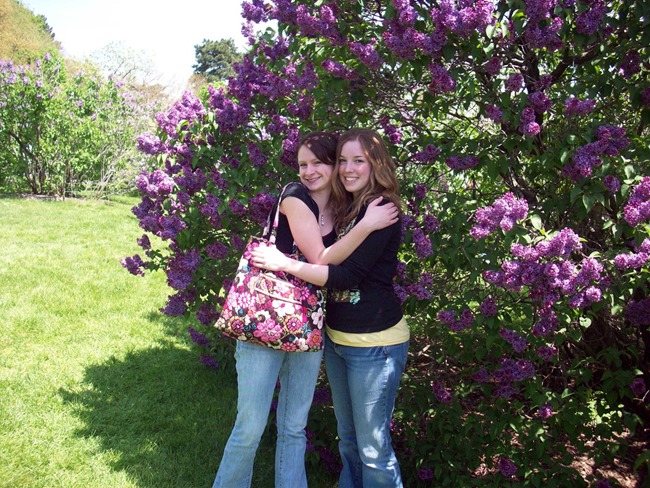 What a throwback photo!  Anyway, despite one billion percent humidity that afternoon, Emaline and I had a great time catching up, walking through the park, and making friends with passing dogs. 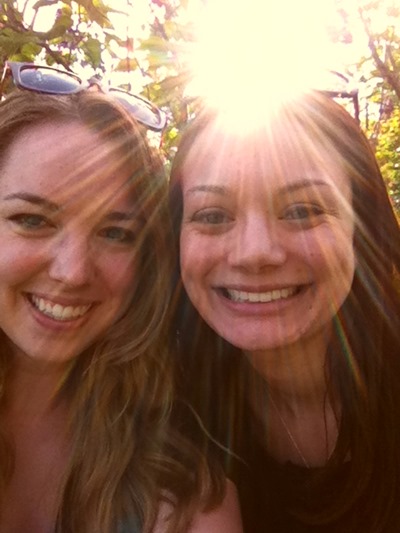 After our jaunt around the park, we went to dinner at Simply Crepes right on the Erie Canal.  We split two different crepes – one with ham and Brie and apples, and one with bacon, Thousand Island dressing, and half a pound of steak.  YUP.  It was delicious, and we found it hilarious that we had the manliest crepe on the menu, and that “manly crepe” is sort of an oxymoron.  Our server, Andrew, found it significantly less hilarious than we did.  That’s fine. 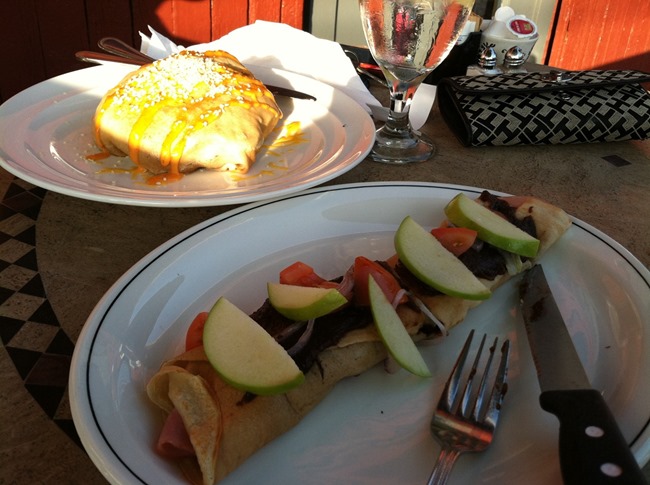 When we were done with our lovely dinner, we were off to Geneseo!!  We arrived a little before sunset and met Corrin (my co-RA from last year) at Allegany before heading up to Muddy Waters.  As luck would have it, it was open mic night and Professor Greenfield was performing some of his classic original tunes!  For those who are unfamiliar, he’s an English prof at Geneseo who writes charming songs in his free time about college, teaching, and life in general – his most popular is an upbeat number about housetraining his family’s dog during a Rochester winter, called “Pooping in the Snow.”

We spent a good hour or so at Muddy (I made it through a large iced ekeroma – I was in serious withdrawal!), and then Evan met us on Main Street so we could have a dramatic reunion running to each other down the sidewalk.  It was movie-worthy.  Emaline made the drive back to Rochester, and Evie, Corrin, and I went to Southside to meet Luke.  After collecting the tallest and most alluring piece of the Allegany Staff ‘10-‘11 puzzle (that’s Luke if you didn’t get it), we were off to a Geneseo Thursday night tradition: QUARTERS!  How I’ve missed it.  And it was there at the Vital that we found Adam the birthday boy, and our beautiful reunion became a quintet. 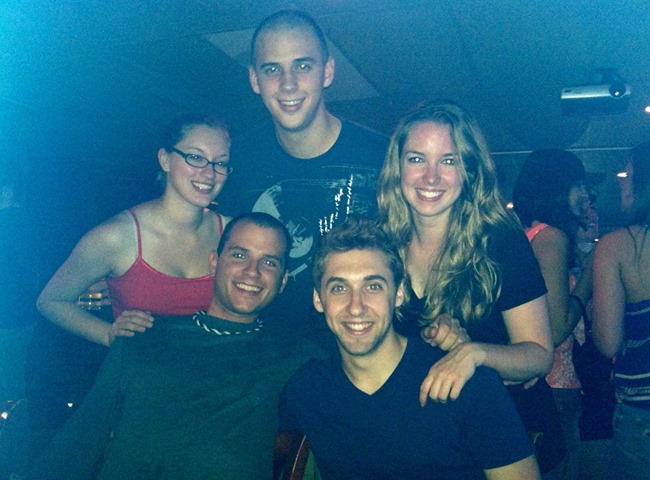 Disregard the demon eyes.  Maybe I was glowing with happiness?  Pretty sure I was, because this was the most wonderful thing ever.  These people were pretty much my life during my last year at school, and I love them all more than I can even explain.  We’ve talked and Skyped and texted pretty frequently, but it was amazing to actually see and hug them again after almost a year apart!  Of course, Meghan and Zulela weren’t there and our staff reunion could never be complete without them, but I feel lucky that I got to see them last fall.

It was during the fateful few hours at quarters together that Evie hijacked my phone and created a Twitter account, from which he was tweeting on my behalf for the rest of the night.  It’s true, I’m on Twitter.  I swore it would never happen, but I, like everyone else, must sometimes eat my words.  Actually, to be fair, I swore I would never do it, and technically I didn’t.  And I will never disclose my Twitter name because Evie was feeling fiesty and made me the most embarrassing one on the face of the planet.  Anyway, I ran into a ton of other familiar faces at the Vital and had such a great time just hanging out with everyone.  It really felt like I still belonged there – just in a slightly different way than last year.

We rounded out the night by checking two essential items off my Geneseo weekend bucket list.  The good old IB to get our dance on… 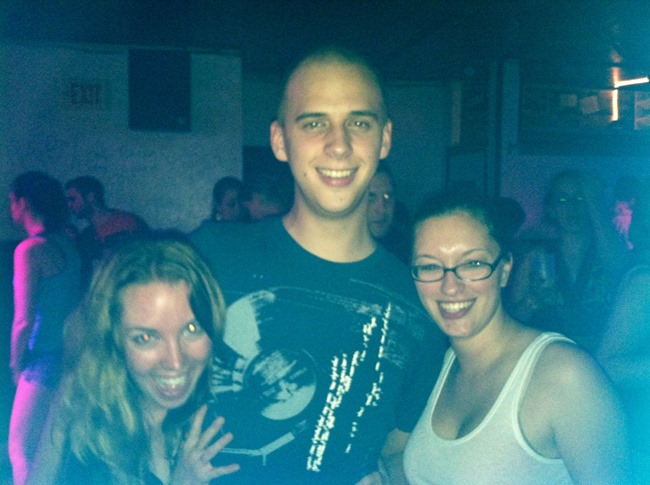 (Oy, again with the demon eyes!)  And finally, the necessary trip to UHots for late night garbage plates. 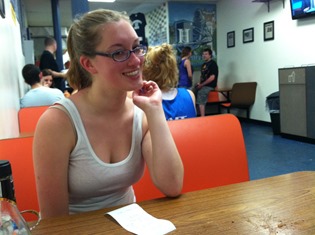 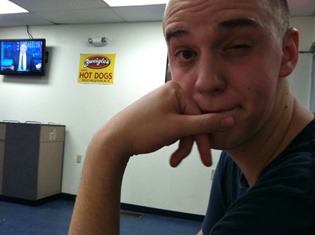 They’re so so cute.  No photos of the plates because they were scarfed down immediately, of course.

And with that, Thursday night was over and it was time for bed.  I stayed with Corrin in her suite in Allegany that night.  It wasn’t my room and I was just visiting, but it was nice to be back in a place that I truly considered home for a good chunk of time.  It was so comforting to smell the familiar ‘Gany smell (I know that sounds weird, but Allegany totally has its own smell) and talk with Coco as we drifted off to sleep.  I call her that because she was my co and her name is Co-rrin.

Friday was a very eventful day, so I’ll be back another time with the rest of my Geneseo recap!  And to all a good night.