Sorry for the long hiatus.  I was moving into a new apartment while still working my normal schedule of two jobs, and a week of packing, purging, and moving left very little time to sit down and blog.  Then, when I was finally settled in my new place, my laptop wouldn’t connect to the wifi network.  Thankfully, the awesome guys at the local computer repairs place fixed me up to run as good as new!  So here I am again, settled in and trying to soak up every last second of my time on the Outer Banks (only a month left… hoooly cow).

I figured I owe you a pretty good adventure after so much radio silence.  Luckily, my leisurely day off this week turned up a bit of excitement when my friend Jonny called me unexpectedly and said simply, “The weather’s good.  Are you free??”  An opener like that surely means something good is in store, so I said yes and got up to Currituck as quick as I could.

You might remember Jonny from when he took me up in the trike last summer.  This time, we switched it up a little bit. 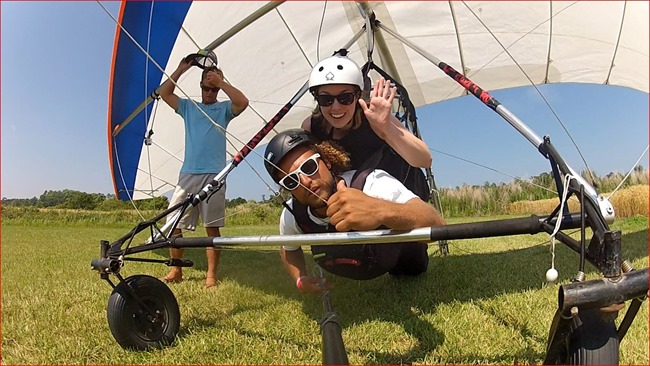 That’s Johnathon, another glider pilot pal.  Go ahead and take a moment to admire his beautiful hair.  Jonny’s the only tow pilot so Johnathon went in the glider with me.  This was a different experience than hang gliding in New Zealand because we launched via aerotowing instead of by foot.  There aren’t any big mountains around here to jump off of like there are in NZ, so we were hooked up to the back of the tow plane (called a Dragonfly) and Jonny pulled us off the ground like it was nothing. 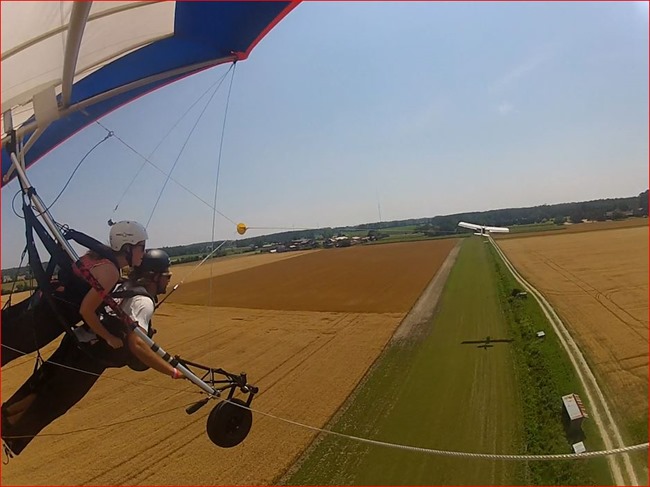 The setup for aerotow hang gliding is also different than foot-launching because you’re one on top of the other, instead of next to each other.  Overall, the “stacked” formation distributes weight more evenly so it’s helpful during the tow-up, but the side-by-side formation is necessary for moving together during a foot launch. 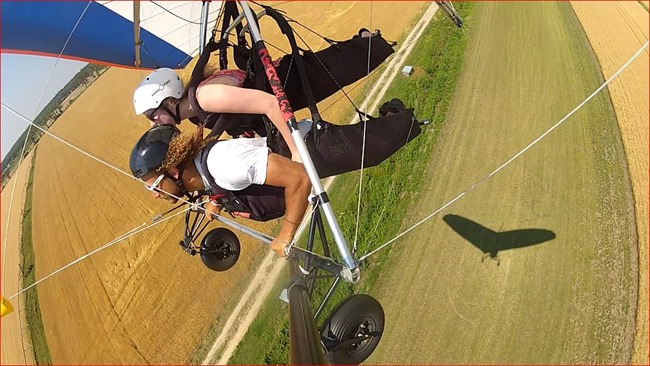 Just like in the trike, we flew over coastal Currituck and had a great view of the sound and all the inlets and waterways.  We slowly circled up to 2000 feet, and then Jonny gave us a a wave from the Dragonfly and dropped us.  See the little yellow cone on the tow rope falling away? 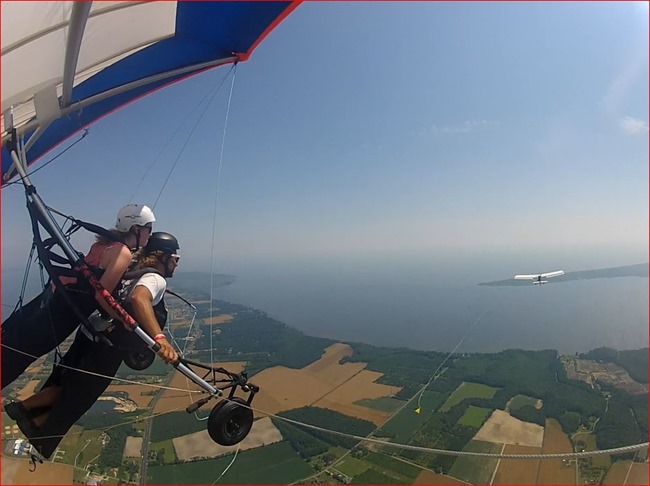 The first few seconds after he dropped us were like going over the top of a roller coaster, but the air currents quickly grabbed us and held us up.  Up until that point, it had been a free ride, but now the work (and the fun part!) started. 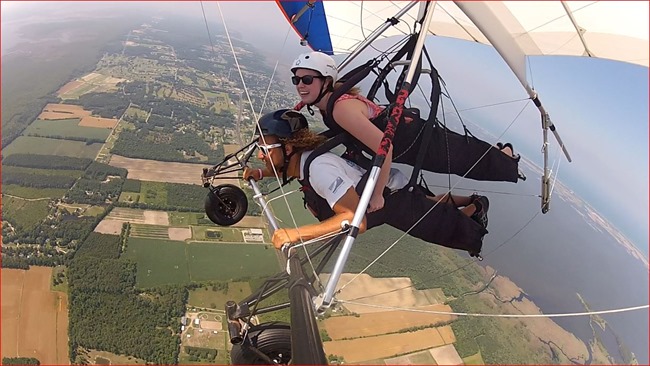 Jonny snuck around behind us… 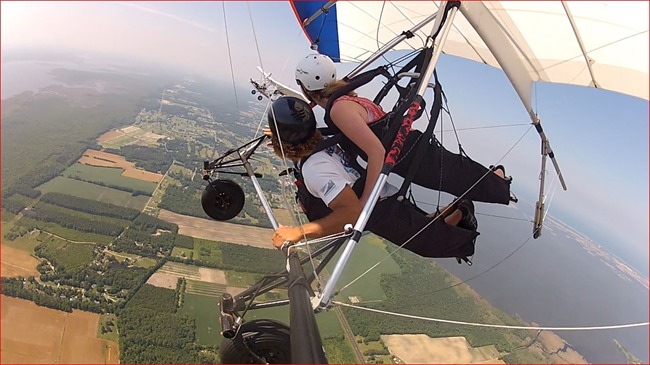 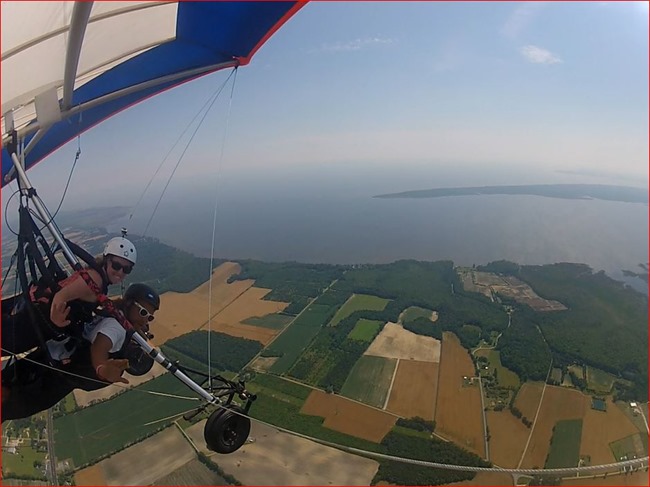 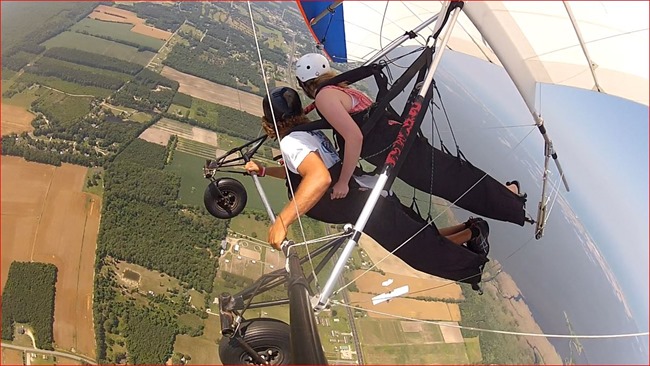 You can’t quite get the full idea from still photos, but he tailspun all the way to the ground.  It was crazy!  When I joked to Johnathon that Jonny was showing off, he said, “Yeah.  But he always gets down that way.”

Back in the air, we readjusted our GoPro and chilled out for a minute. 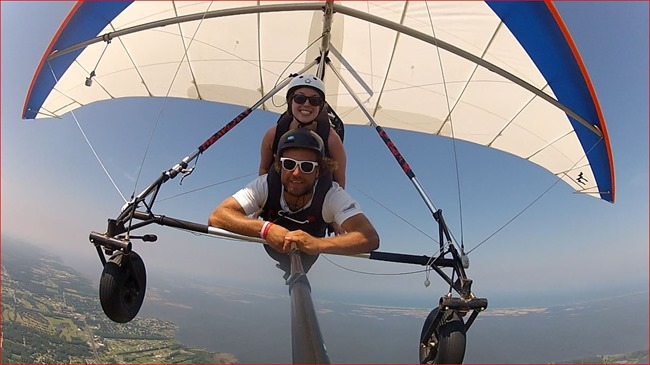 I’ve now gotten to see coastal North Carolina from the air a handful of times, but every time I do, it amazes me what a geographically interesting place it is.  It’s so skinny!  And this is Currituck… the Outer Banks is way skinnier (you can see Duck and Corolla on the OBX way on the horizon in a few photos above). 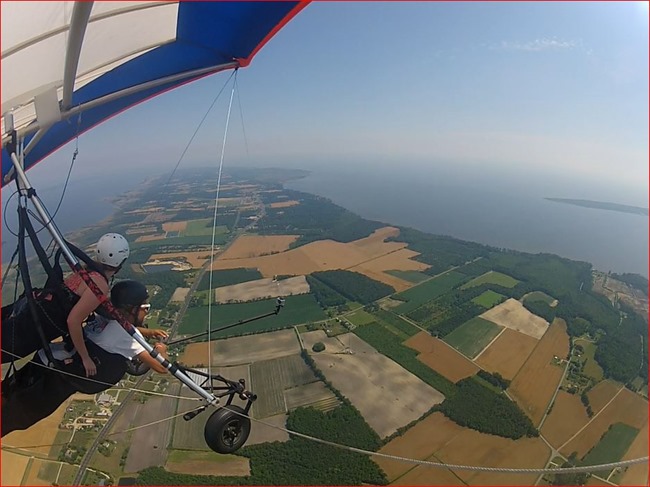 After a bit of gliding around, Johnathon gave me some pointers and then handed over the controls so he could hang out and take it easy. 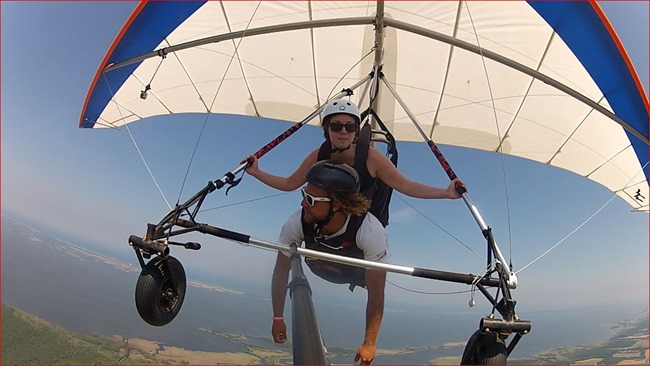 The glider was WAY easier to maneuver than the trike.  It felt super light and turned effortlessly when I steered.  We turned back around to start heading towards the landing strip and see some more of the ocean on the way. 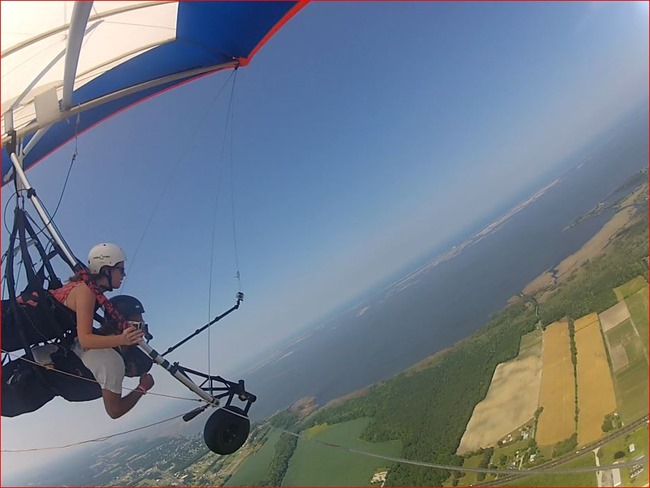 And then Johnathon took back the reigns and asked one of my favorite questions:

I had a vague idea of what he had up his sleeve when he asked me that question, and I was right… my face just about says it all here. 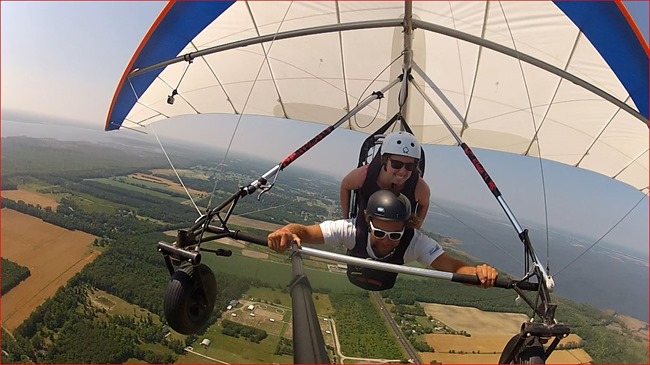 All we had to do was shift our collective bodyweight backwards and forwards to make the glider act like it was going up and down huge hills in the air. 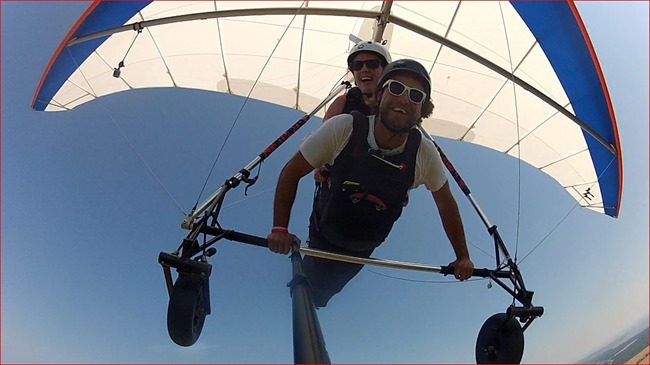 I love that you can tell by Johnathon’s face that he loves this just as much even though he does it all day, every day.  We were having a blast!  After the hills, he did some serious stunts for us. 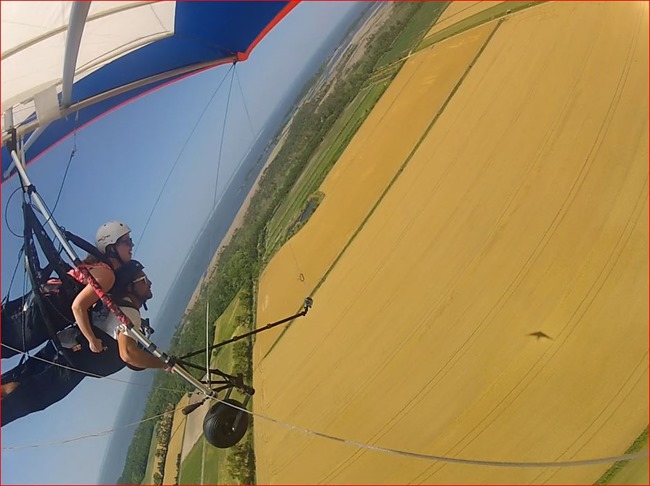 I love our shadow in that photo!  Sometimes we’d dive straight for the ground, but then catch an air current and go right back up again.  Johnathon was flipping, corkscrewing, and twisting us in every direction. 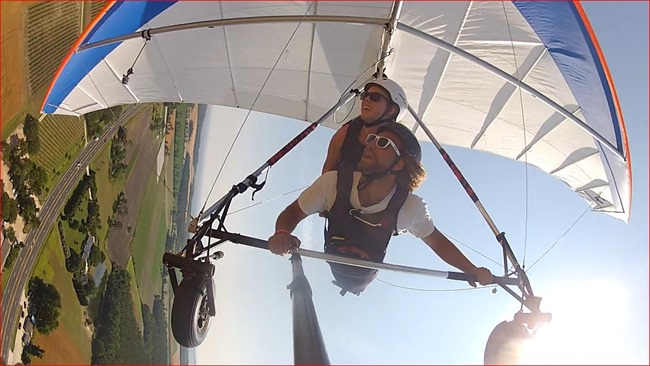 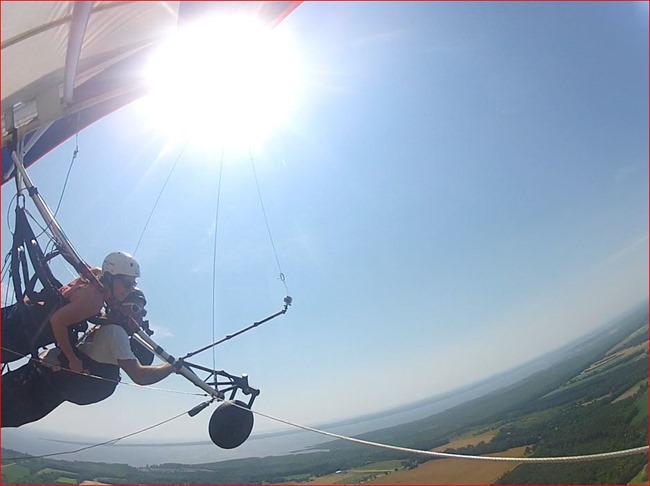 Eventually we leveled out again and spent our last few minutes gliding around smoothly and enjoying the views, all the while descending.  Finally, Johnathon brought us in for a picture-perfect landing exactly where we took off.  This landing was definitely less nerve-racking than in New Zealand because Johnathon was under me as we dove.  If I’m going to smash face-first into the ground, I’d rather have a squishy human to break my fall. 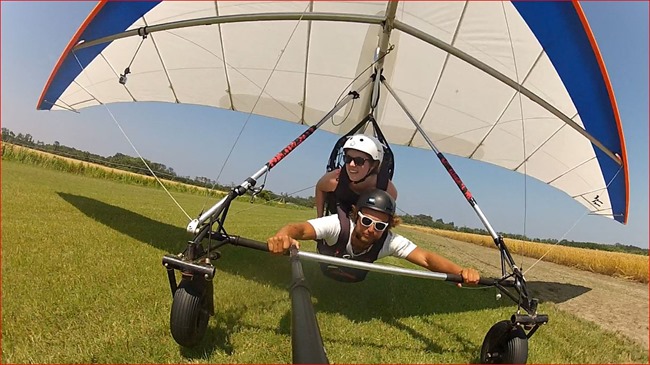 Then it was time to wrangle out of our harnesses (I was faster), peace out to the camera, and head back in after a successful afternoon’s adventure. 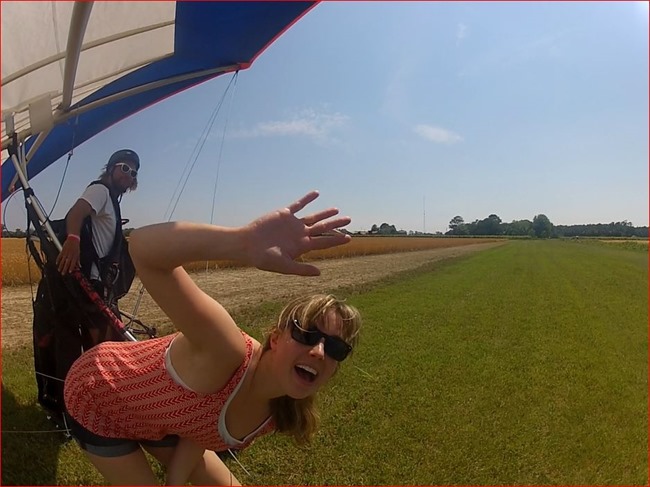 But apparently I wasn’t quite done.

Jonny really wanted to take me up himself, so we went up for a quick flight in the Dragonfly.  He even let me sit in front!  Like the trike, it’s totally exposed on all sides.  You have a seatbelt… but that’s about it.  Crazy!  I was tempted to take my camera and get some photos of the scenery, but I was just too nervous about dropping it (FYI my sunglasses were from the dollar store… wasn’t taking any chances!).

Once again, I owe my dear friend Jonny (and equally awesome buddy Johnathon) for the thrill of a lifetime.  If you’re ever near the OBX, you’ve got to let these guys at Kitty Hawk Kites take you up.  You won’t regret it!

So what’s next?  Amity, your hot air balloon suggestion is still top of the list… or maybe it’s time to just get my pilot’s license myself?  I wonder if they have coupons for that…

3 thoughts on “Playing with the Birds”