A couple of weekends ago (how is time passing so quickly?), Amity and I set out for a full day of excursions in central London.

All good days should begin with brunch, so that was our first order of business.  We set out to find The Breakfast Club in Soho, which I’d heard recommended as essentially the best breakfast & brunch menu you can find in London.  That phrase is my fantasy.

However, I’m still not quite used to remembering that I live in a major city now, so we turned the corner on to D’Arblay Street to see a big queue stretching away from the front door of the tiny establishment.  We hopped on the end just to see how quickly it moved, and almost immediately the hostess came out and said that the wait would be over an hour.  Oops.  Fortunately, we weren’t in any big hurry and neither of us were too starving yet, so we decided to wait it out.

Our brilliant strategy worked, and a big chunk of the queue (most people were clearly much hungrier than we were) wandered away to find an alternate option.  After that, parties of two were taken in relatively quickly, and we probably only waited about 20-25 minutes overall! 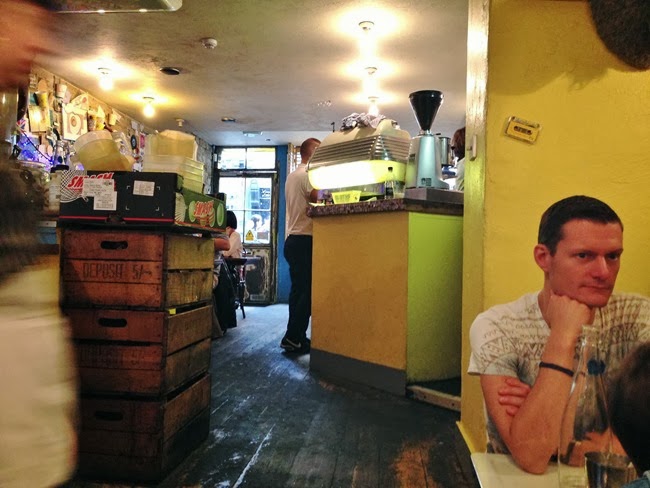 The place was crowded, noisy, and painted violently yellow.  And I mean all that as a compliment.  The décor seemed like it couldn’t decide which decade it belonged to (the name of the venue would suggest an 80s theme, but there was also a whole lotta Elvis goin’ on).  On top of that, the music selection was all 90s, all the time.  The two songs I remember hearing one after the other were Ghetto Supastar (a 90s classic, man!) and Runaway Train.  I guess The Breakfast Club transcends a single time period.

We wedged ourselves in to a row of little wooden tables that was packed like sardines.  The maneuvering was a little awkward… let’s just say our ketchup bottle was dangerously close to being knocked over by someone’s butt any time a fellow diner had to squeeze in or out.  Our two-person table was so tiny that we had to rearrange the condiments to create a fence between us so we’d each have enough room in front of us for our plates.  It worked out nicely. 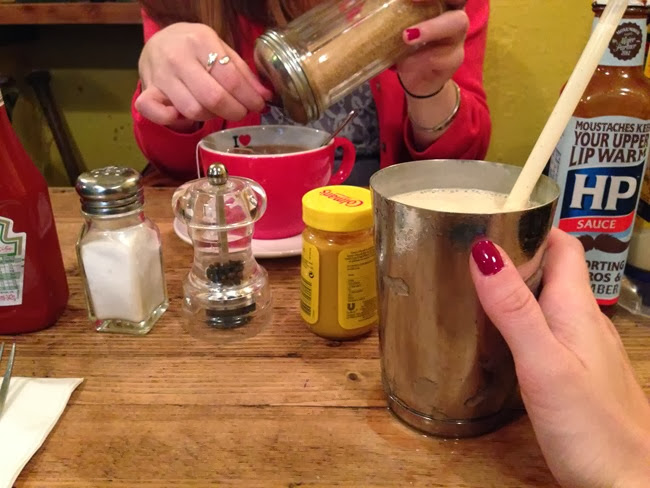 Amity started with tea and I tried the Elvis milkshake (peanut butter and banana).  Definitely order that.  It was super delicious and heavy on the peanut butter, although it did come in a frozen metal tumbler that promptly melted and soaked the table.

The Breakfast Club’s specialty seems to be combining pretty normal ingredients and dishes in novel ways.  Their menu is just ambiguous enough that you’re always in for a bit of surprise when your food comes.  I ordered the Ham So Eggcited (oh yeah, and they’re big on puns), which was described as simply “ham, eggs, pancakes, and syrup.”  That’s exactly (egg-xactly) what it was… all piled together in one glorious stack of brunchy heaven. 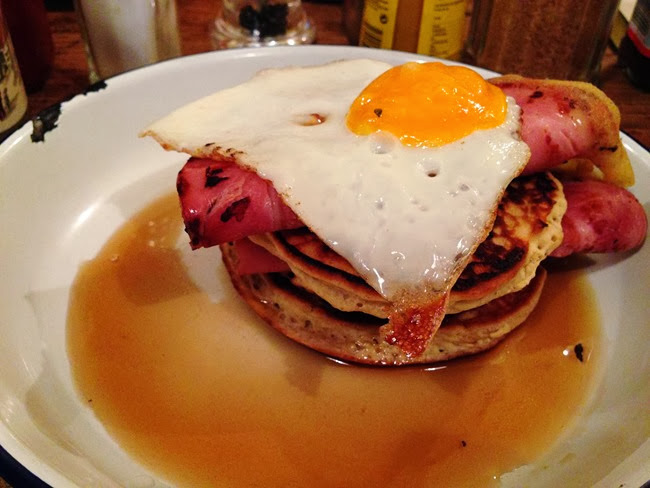 I wouldn’t have eaten all these ingredients in the same bite before, but now folks, my mind has been opened!  I have seen the light!

Amity and I both agreed that The Breakfast Club was a hit, and headed out to walk off our food babies before our next stop of the day.  We meandered down Tottenham Court Road and stopped in to a big department store called Primark, which is the closest thing we’ve found to Target so far (though not quite up to that mythical standard, of course).

Not surprisingly, three floors of inexpensive clothes and shoes turned into a huge timesuck, and we eventually realized we had to scoot or we’d be late for our main event: the final stage of the Tour of Britain cycling race!

We walked through Trafalgar Square to Whitehall and stopped briefly at the start/finish line, where a man with an extremely feminine haircut was commentating on the previous stages and biggest contenders.  We even got to see Bradley Wiggins take the stage in his gold jersey!  The announcer asked if he was planning to hold on to it during that day’s race, to which Bradley replied, “No, I was thinking I’d lose it, actually.”  Cheeky. 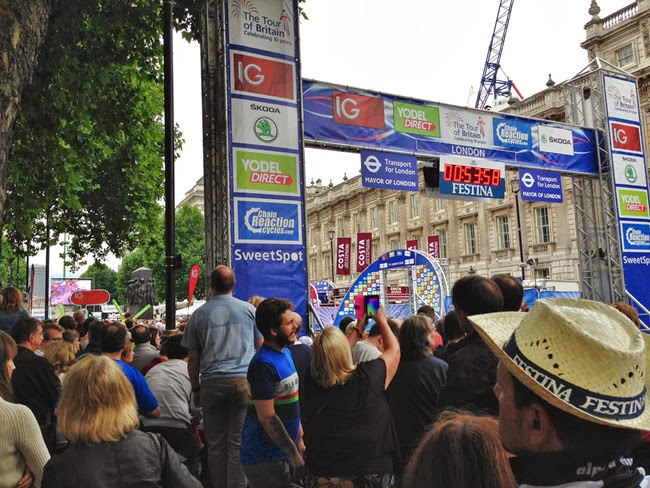 (That picture’s actually from when we popped back to the finish line a while later, which is why the timer is going.)

We decided to try and watch the race from the Victoria Embankment, which runs right along the Thames.  We found a good spot, became mildly confused as to the direction the race would be going, but just decided to stay there and see if some cyclists passed us.  And they did!

This final stage of the race consisted of a whole lot of laps around a relatively short course designed to pass all the London hotspots.  It was funny to see the cyclists riding almost leisurely for the first bunch of laps and chatting to each other as they went… but after all, not much can actually be won or lost in the final stage (I learned a lot more about the strategy involved in bike racing from the year’s Tour de France). 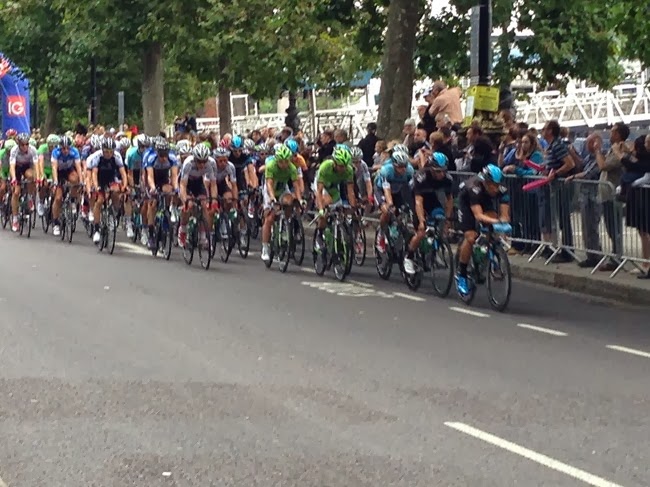 We clapped and cheered through about five or six laps, then decided to move along and find a different vantage point for the finish.  We stopped directly under Big Ben for a while, and could see the television helicopters flying over us to film the race.  Especially cool since my parents were watching the live footage on TV at the same time (they didn’t see us though… of all the days to forget my light-up sombrero at home!). 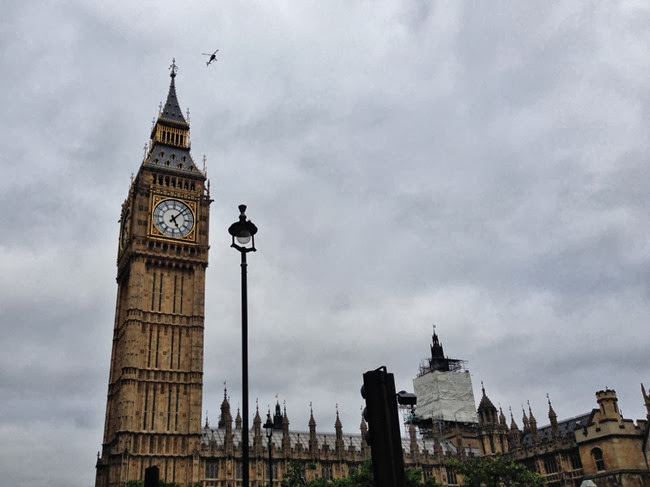 See the chopper up there?

The race ended in a flurry with Mark Cavendish as the stage eight victor, and Sir Bradley triumphant overall (isn’t that what happened in the final stage of the Tour last year, Dad?).  We found a lovely spot outside the Westminster tube station to pass the time and watch tourists take pictures of themselves pretending to lean on Big Ben.  These two were the worst offenders: 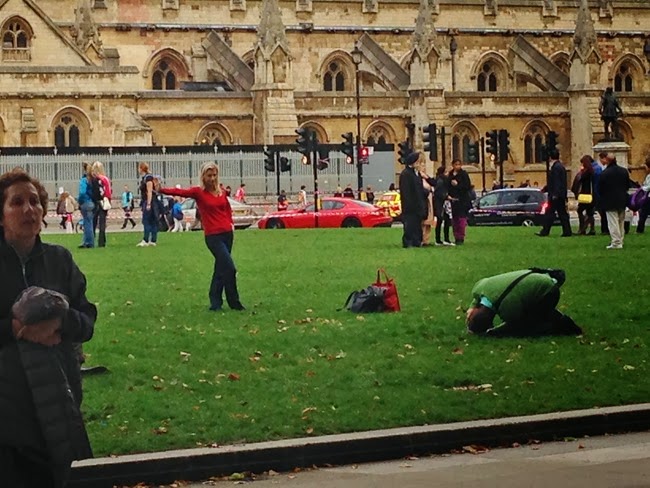 Anything for a good angle, eh?  Now, I’m not one to judge – I definitely have a picture of myself pretending to lean against the Eiffel Tower when I was 16 – but they were there for a good 40 minutes taking variations of that exact photo.  Sometimes the girl got crazy and pretending that she was picking Big Ben up from the top, that it was sitting on her hand, etc… brilliant advances in photography happening right before our eyes.

The view to the other side was considerably less ridiculous. 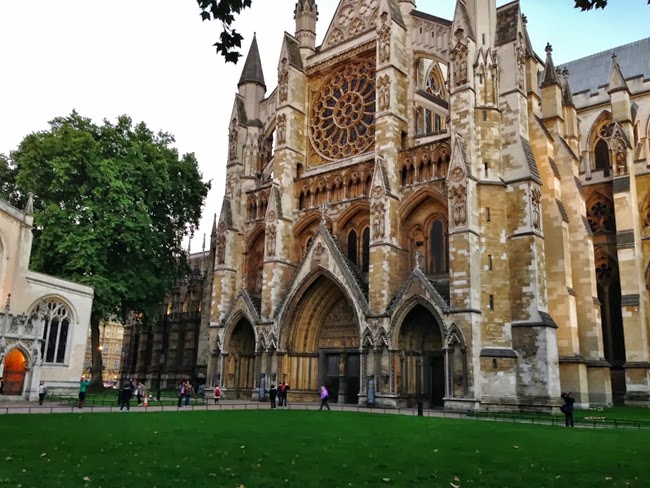 We were actually waiting around so that we could attend an evening church service in Westminster Abbey.  The service was given by a lady who had about eighteen different titles (Doctor Reverend Vicar Elder Sarah So-and-so, Esquire III… something like that).  She was actually a medical doctor and a practicing therapist in addition to being a reverend (which didn’t make me feel bad about my own accomplishments at all or anything…) and her sermon compared the lives of St. Thomas and Martin Luther using cognitive behavioral therapy.  This is a big deal in psych.  It was awesome!

It was also amazing to actually sit in Westminster Abbey.  Even though we were only in the part directly inside the doors (the full sanctuary wasn’t opened up because of the small size of the service), it was still such an impressive and beautiful space.

The service only lasted about half an hour, and we reemerged on to the green just as the sun was setting. 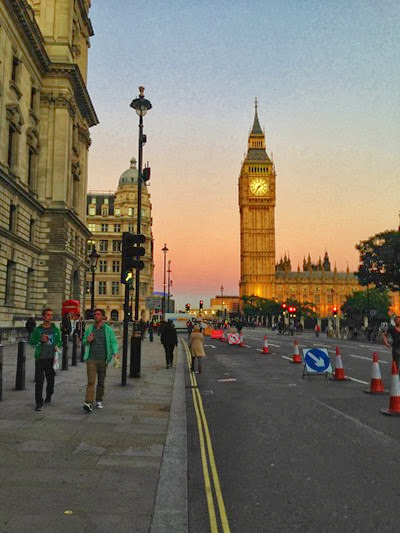 What’s the best brunch spot you’ve ever been to?  Anyone who’s been to London have any more recommendations?  I’m serious about breakfast food.