I’m back from my “academic retreat weekend” with better stories than I expected.  Let’s start with a bang-up embarrassing one, shall we?

Our coach bus was scheduled to depart from LSE at promptly 4:45pm last Friday, which meant I should leave my flat about an hour before that to get there with a little time to spare.  Unfortunately, at about three o’clock, I got a text from my friend telling me that the District Line (the tube line I needed to take) was completely shut down, as were a couple of other lines.

This meant taking the bus.

I have been really trying to repair my relationship with the London bus system, but this is made difficult by the fact that it is just terrible.  The buses are hardly ever on time, they get completely caught up in traffic, and they generally mess up your travel plans no matter how hard you try to plan ahead.

Case in point: I left immediately – seriously, I was out the door by 3:10 – and my London transport app estimated that it should still only take me an hour and fifteen minutes to get to LSE by bus at that time of day.  Yet, at 4:45, my red double-decker was still standing still in traffic, barely past Kensington Gardens.  I’d been texting with my friend, who was already there and desperately trying to get them to hold the coach for me.

And did I mention it was dark and raining by this point?  Ugh.  Eventually I had to acknowledge there was absolutely no way the bus was going to get me there in time, so I had nothing to lose by trying it another way.  The only other way I had was my feet, though.

So I leaped off the bus and ran, wearing my wellies and my big heavy backpack, the mile from Piccadilly Circus to LSE.  It was the worst.  In retrospect, it’s kind of funny, but it took me a few days to see it in that light.  I kept thinking I was going to fall on my face in a puddle and just lay there out of sheer exhaustion.

Anyway, I don’t really know how, but somehow I actually made it, tumbled on to the coach bus as a sweaty hot mess (where my classmates and lecturers were super nice about being held up!), and we all set off for the countryside only fifteen minutes late.

To add insult to injury, we drove straight back the way I had come and nearly passed by my flat.  Oh, the humanity!

Do you need some pretty pictures now?  I thought so.

Our retreat was hosted at Cumberland Lodge, a beautiful old country house in Windsor Great Park in Berkshire.  They gave us the history of the lodge when we first arrived, which was extremely interesting, but I’m already getting quite wordy so I’ll let you read about it here if you’re interested. 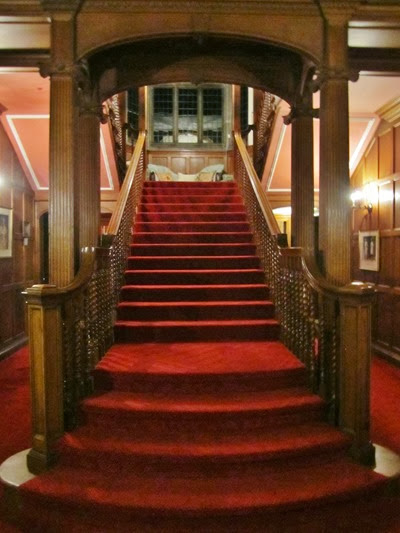 Cumberland is grand and cozy at the same time – the perfect English country home! – and after an excellent supper we were allowed to explore a bit on our own.

If you’ve seen The King’s Speech, you might recognize this main staircase! 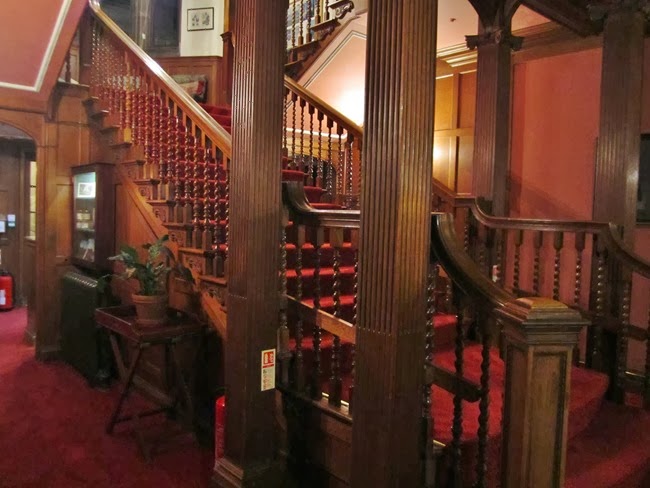 We even found a secret library with amazingly old books (although the lighting does look sort of weird and fluorescent here, it was much softer in person).  And every single room had a fireplace. 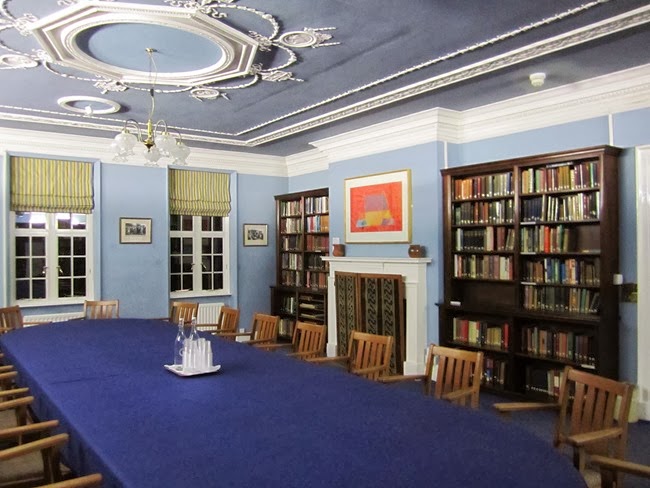 We had the first of our seminars that evening, where one of our professors and a PhD student presented their research involving cyranoids (people directly speaking the thoughts of someone else – named for Cyrano de Bergerac!).  It was a bit sci-fi-ish but also really cool, especially when they told us about the experiments they’ve designed and how they’ve learned to shadow-speak (mimic what they hear through a radio transmitter in real time) almost perfectly.

Finally, it was time for bed.  There were about 50 of us on the retreat, from all across the social psychology and philosophy departments, and our rooms were randomly assigned and scattered among three different buildings.  I was rooming with my classmate, Anna, so we headed upstairs in the main building and wandered down the hall to find our spot. 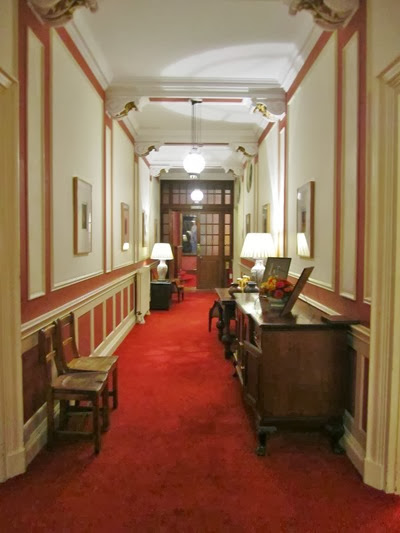 We were giddy with excitement at the sight of our comfy digs and immediately plopped down to try out our lovely squishy beds. 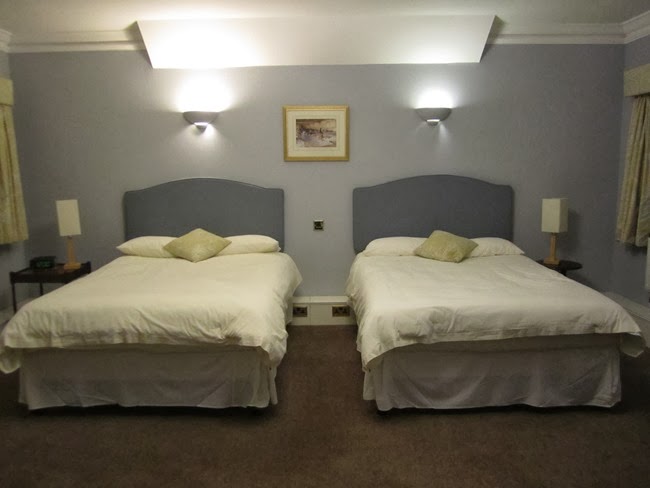 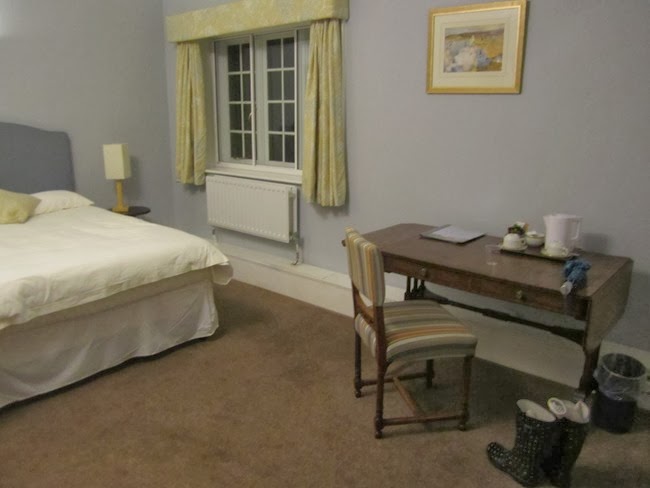 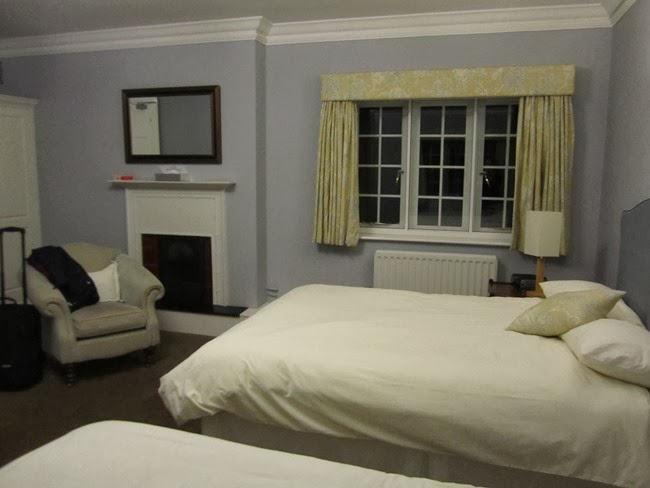 It was only when a few our of friends popped in to say goodnight, and gaped when we opened the door, that we realized we had somehow lucked into being assigned the biggest room in the building – including the biggest beds.  Anna and I tried to react indignantly on their behalf, but couldn’t stop ourselves grinning a bit when we closed the door again.

We appreciated our good luck even more the next morning, when we woke up and threw open the windows to this view: 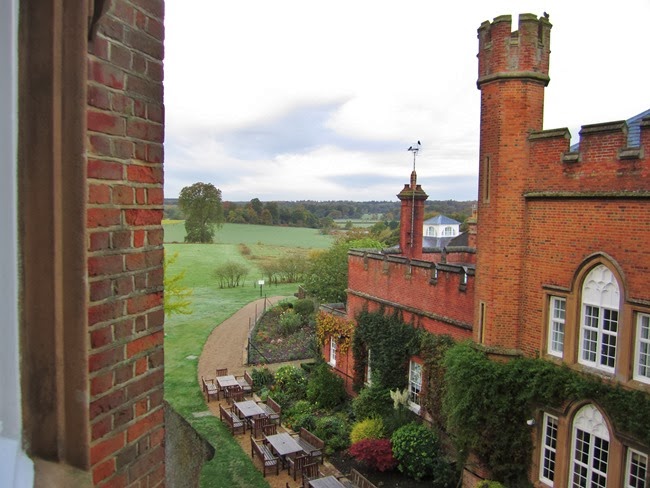 Our other window looked out over the lush green lawn and a bit more of the rolling hills in the distance.  Breathing in the country air was so refreshing after months in the city that it made me want to bound downstairs and start my day (this is not a feeling I often have so I was rather impressed).

We were greeted with a full English breakfast, which we enjoyed in one of the lovely old dining rooms.  I can’t even decide whether to compare it to the Hogwarts Great Hall or a scene from a Jane Austen novel.  Too perfect. 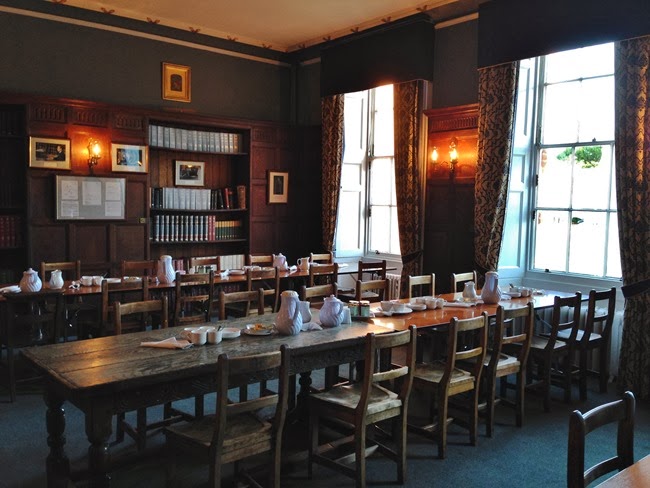 Predictably, this room had another fireplace with a beautiful herringbone brick pattern (they were all fully functional but it’s not quite cold enough for them to be lit yet), as well as shelves upon shelves that were visibly bowing under the weight of the books they carried. 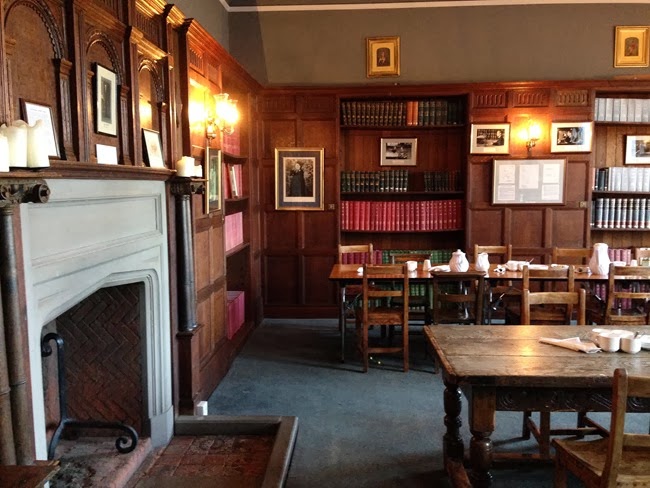 We wandered around the lodge a bit more after breakfast, peeking into some of the sitting rooms in the front of the building. 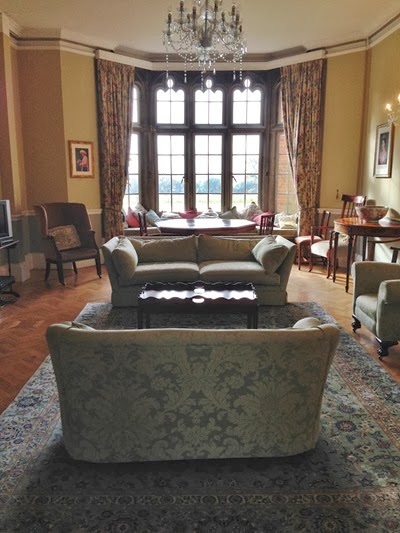 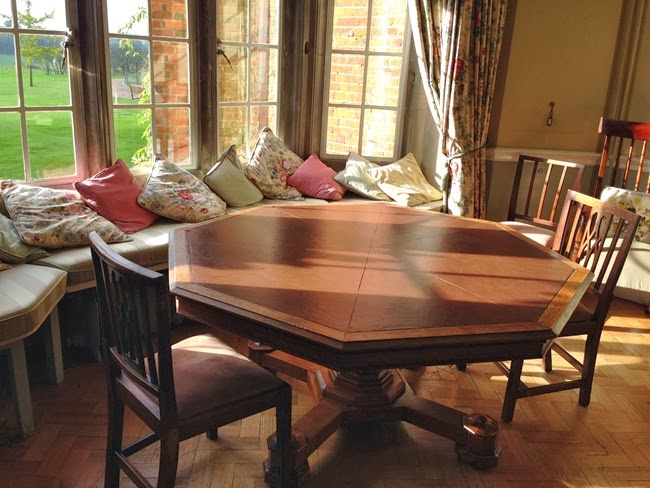 The mental image was even more vivid as I’d just seen Mr. Darcy in the flesh a few days before (I love England!!).

Soon it was time for our first seminar of the morning so we bundled up and made the quick walk from the main lodge to the Mews building. 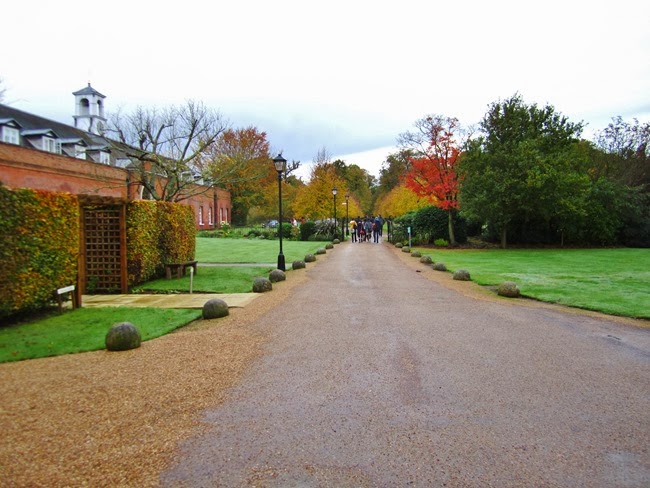 Along the way is the Grooms House, where some of the philosophy students were staying.  I never had a chance to go inside, but isn’t it just perfect? 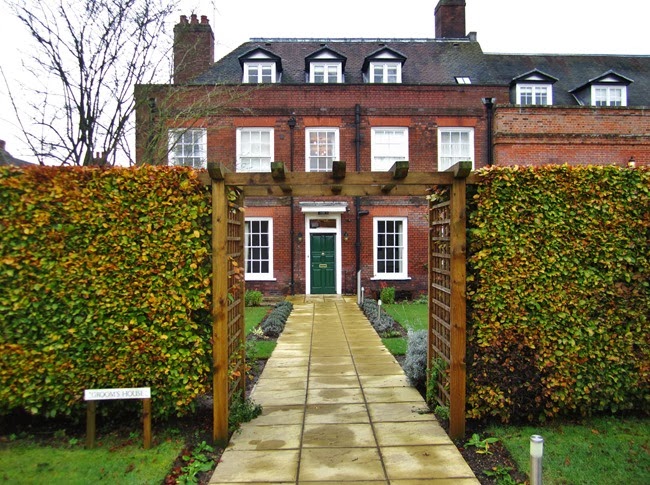 The rest of Saturday was mostly packed with seminars and discussion.  Our first started at 9am and our last finished at 10pm!  We did have meals in between, and a three-hour break in the afternoon, but we were still all mentally exhausted by the end of the day.  Cumberland Lodge is very strict about keeping the nature of your visit academic, and one of our lecturers told us that he’d asked if they could forego having a final lecture after dinner (you know, let us off easy and only end at 8pm), and Cumberland said no.

The large majority of the seminars were really fascinating, though.  They were related to our fields of study (so sure to be something we were at least generally interested in), but not the sort of subjects we’re covering in class.  They mostly had to do with our professors’ research, and ranged from the above-mentioned cyranoids to global diversity to field studies of ghettos in Brazil.

A few of us made use of our free time that afternoon and took a quick jaunt to the main attraction in the area.  I’ll give you a break here, though – check back soon for details of Windsor Castle!