Well, the dust is beginning to settle from the shenanigans of the first half of this winter break, and I’m hopelessly behind on blogging about it.  I have about a week left before school starts again so we’ll see how much I can catch up in that time.  Let’s pick up where we left off, back in Scotland, which somehow now feels like a very long time ago.

As the Brits say, let’s crack on, shall we?

“To travel hopefully is a better thing than to arrive, and the true success is to labour.”

Well, traveling hopefully and labouring were certainly themes of the second day of our Scotland trip.  This was our biggest “roadtrip” day, as our only plan was to drive from Glasgow to Inverness (known as “The City in the Highlands”).  The drive would normally take 3-4 hours but we had all day for it, which meant lots of room for detours and exploring.

Our day began with a lovely sunrise in Glasgow… at 8:30am. 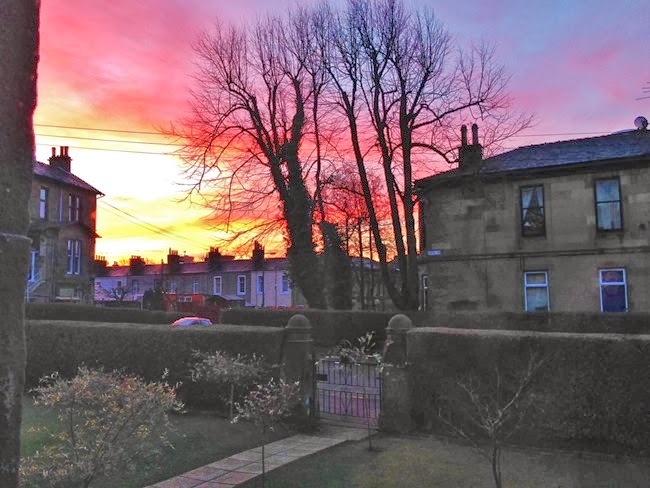 Yep, turns out Scotland’s waaay up there – about even with the lower part of Alaska, in fact – and there’s not too much daylight in the winter.  We’d actually scheduled our visit during the darkest week of the year, right before December 21st, so well done us.  Still, it made it easy to see the sunrise every day.  We enjoyed that one while having breakfast courtesy of Thomas at Craigpark, and then set off north.

We decided to drive up through the Trossachs National Park and right along Loch Lomond (of tenth-grade concert band fame). 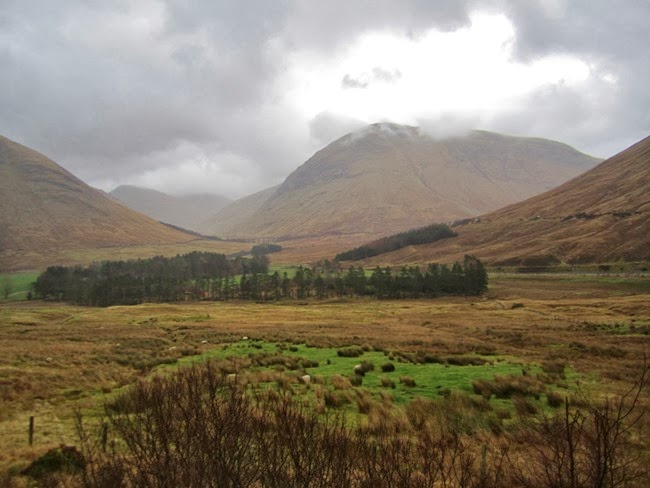 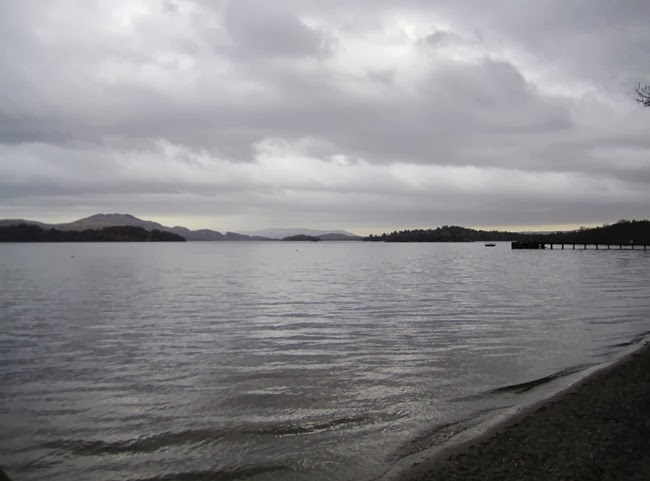 It was very gray and overcast that day, but it was nice in a way.  Scotland’s not one of those places that you necessarily want to see in good weather all the time.  You have to appreciate the roughness of the landscape a little bit.  Sort of like Milford Sound, I think the Scottish Highlands seem a bit more majestic and impressive under stormy skies than bright sunshine. 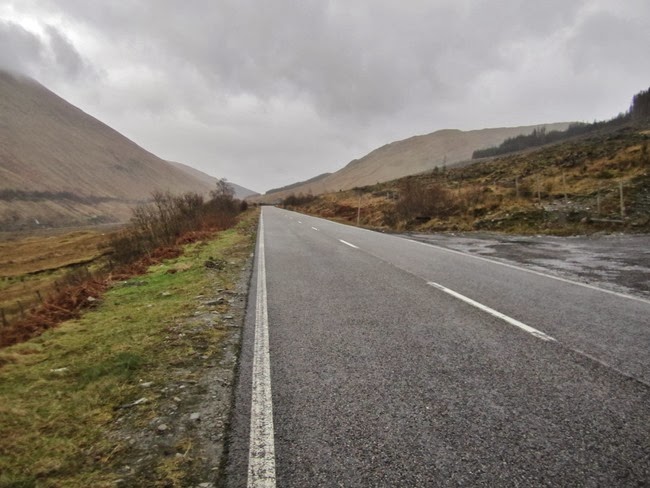 Milky Tea continued to carry us faithfully northward and, as the title of this post suggests, we passed many lochs that day.  After Loch Lomond, there was Loch Awe, Loch Etive, Loch Linnhe, and even, delightfully, Loch Lochy.  But more on that later.

We were driving along the banks of Loch Awe during a midday burst of rain, when Amity (our trusty navigator) noted that we were pretty near to something called Kilchurn Castle and that we might try and visit it.  Now, the number of castles in Scotland rivals the number of lochs and we were keen to see as many of both as we could.

Unfortunately, we were having trouble keeping a GPS signal since we were up in the boonies in bad weather.  We had our route and preplanned stops marked out on an actual paper map (my proposed tentative title for this trip was “Maps, Not Apps!” but don’t worry, I’m not making t-shirts or anything), but it was a bit difficult to deviate to things that weren’t shown on our map.  For example, the GPS on my phone was showing that Kilchurn Castle was in the middle of a lake loch.  After a minute though, we realized it was pretty likely that that’s actually something the Scots would’ve done.  And lo and behold: 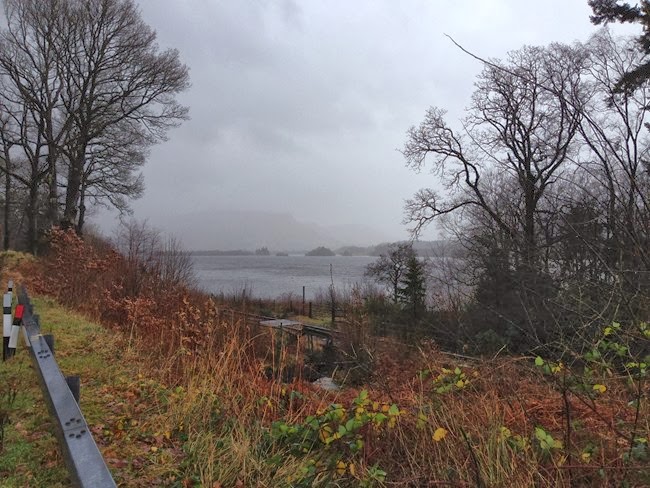 See that vaguely castle-shaped mound in the middle of the loch?  “Selves, it’s a good idea to try and get out to that,” said we.  And so, after driving past the same stretch of road a good few times and finally finding a helpful hint on Google about the non-existent entrance markings, we parked and set off down the marshy path that leads to the castle.  If the water’s high enough, it turns into an island, but it was low enough to expose the little land bridge that day. 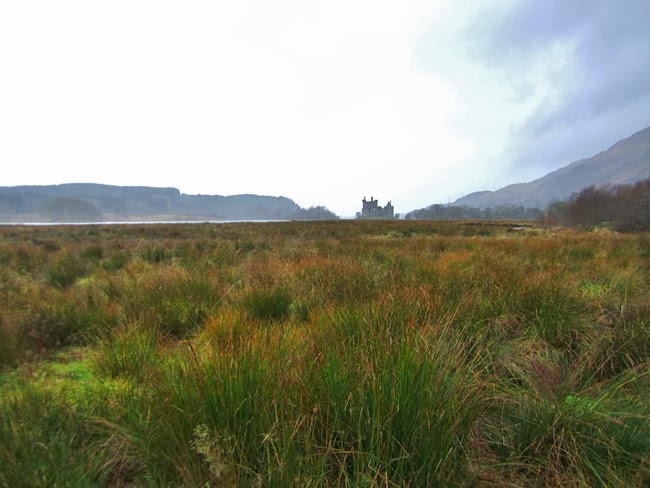 Kilchurn Castle was built in the 15th century and abandoned in the 18th.  As such, it’s mostly ruins now, but still presents quite an impressive sight.  It was really amazing to walk up this crumbling fortress and think that, five hundred years ago, people actually lived there!

Fun fact: the barracks are still mostly intact and are actually the oldest surviving barracks on the British mainland.  History! 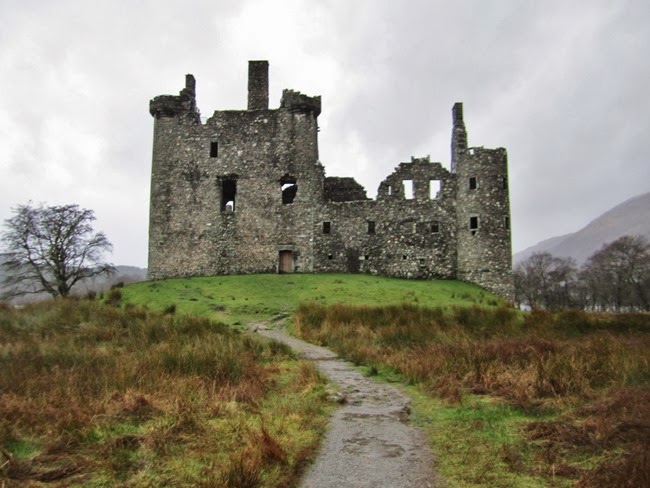 You can still go inside and climb up to the top of the battlements, but not on a Sunday, which is when we were there.  Ah well.  The view would’ve been nice, but only three or four stories higher than the one we had anyway. 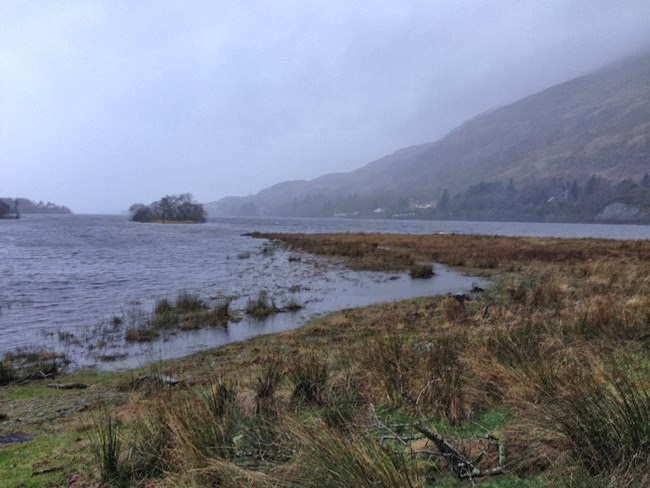 While we were walking around the outside of the castle, the sprinkles started turning into actual rain, and by the time we got back to the carpark, it was pouring.  Between Amity’s unlined coat and my dumb felt boots, we were both soaked to the skin on different parts of our bodies.  Luckily we could just dig into our bags and change, but actually, I don’t think we got properly warm again for the rest of the trip after that little debacle.  Live and learn.

As it always does in Britain, the rain let up before long, and we stopped for tea and soup and scones at a hilltop café overlooking Loch Linnhe and Castle Stalker, which I’d really hoped we were going to see! 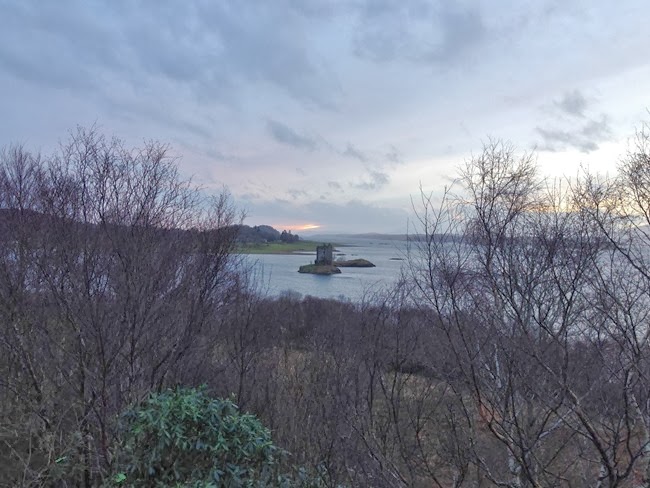 Yes indeed, it’s another castle in the middle of a loch!  But it’s such a cool one!  It was also the home of the French Knight in Monty Python and the Holy Grail.  Now go away before he taunts you a second time. 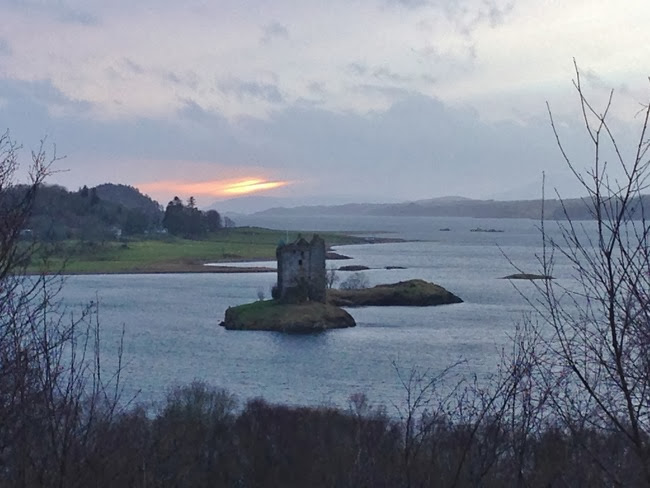 At this point, we were feeling ready to reach our destination, as the whole getting-soaked-and-freezing part had put a slight damper on our adventuring stamina for the day.  It was only mid-afternoon, but we were already losing the light.  We drove past the excellently-named Loch Lochy but truthfully didn’t even notice (it’s very small).  Maybe that was where we pulled over to see this excellent sunset though! 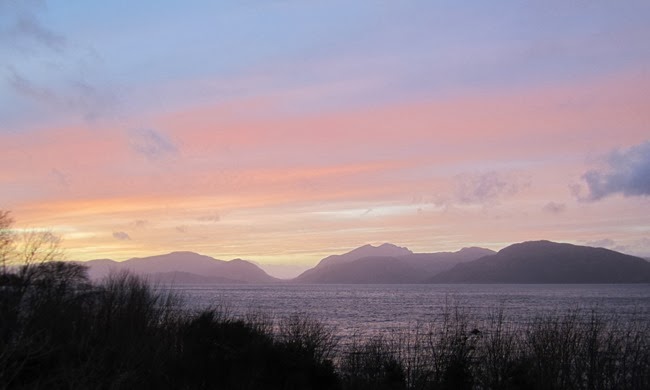 Hmm, yes.  That loch looks a lot like a Loch Lochy, don’t you think?  Say that five times fast. 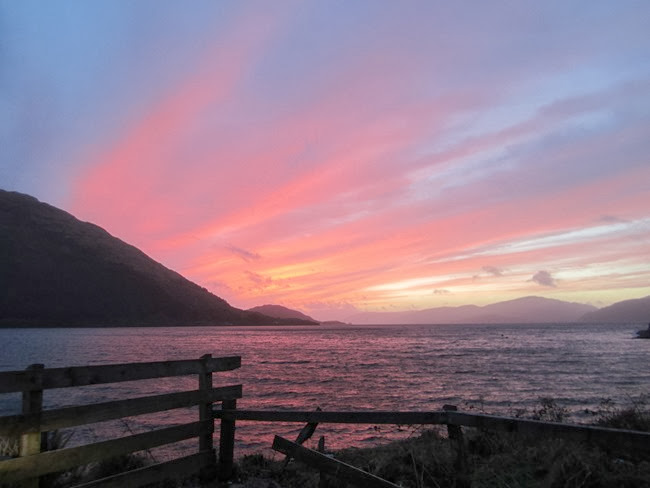 Sadly for us, beautiful sunsets are inevitably followed by total darkness.  That’s just how it works.  Literally the way the world turns.  So when we finally got to drive along the infamous Loch Ness, this is all we saw: 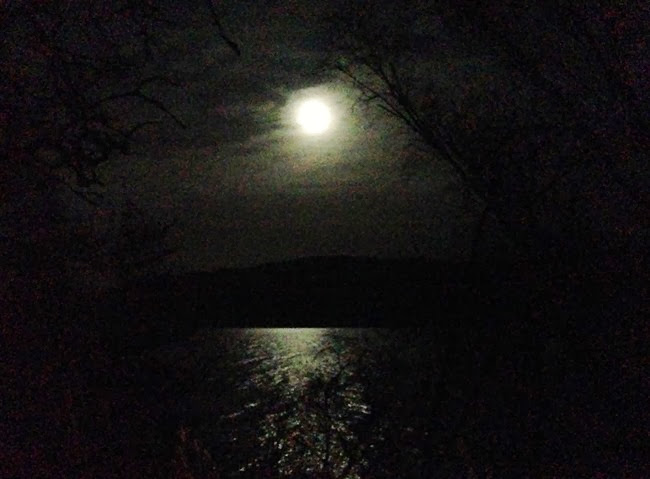 The full moon was pretty cool, actually, and a little eerie.  Like a sea monster head should’ve popped up from the lake right in the middle of that patch of reflected moonlight.

We didn’t bother trying to sightsee in the dark and instead kept driving until we finally reached Inverness and our ludicrously cozy bed and breakfast.  How cozy is ludicrously cozy, you ask?  Feast your eyes upon this slice of Scottish heaven: 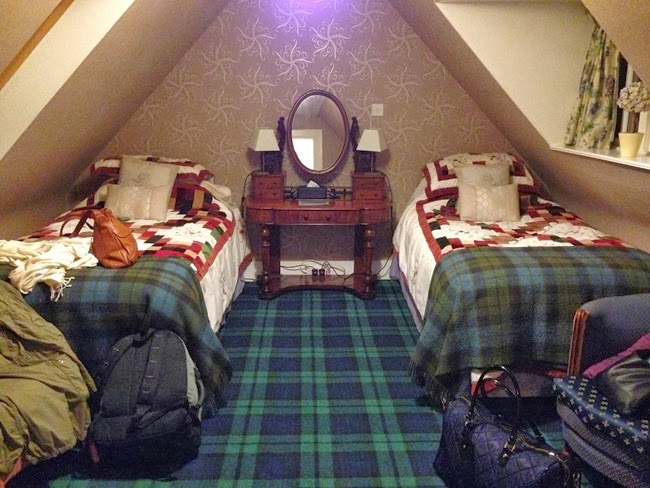 Wall-to-wall Black Watch tartan carpet and matching wool blankets on each bed.  So perfect.  We stayed at The Ghillies Lodge in Inverness, and both the B&B and its owner, Mary, were beyond sweet and lovely.  Our room did get really chilly at night because it was right under the roof, but I think we both were totally comfortable under the piles of blankets that were on each of our beds!

In fact, we walked into town to get something to eat, but then came straight back and parked ourselves in bed for the rest of the evening to watch 8 Out of 10 Cats until we fell asleep to the sound of rain on the roof.

Footnote: Why are you taking so long to blog about Scotland, Julie?  Well, as I was just explaining to Amity whilst laying facedown in her comforter, I’ve always wished that I’d blogged about my travels within New Zealand in more detail so that I had fuller accounts to look back on – so this time, I’m going to!  However, if you are weary of my wordiness, pop over to Amity’s blog and read her account of our trip in one post.  It’s quite funny – but beware, spoilers.

4 thoughts on “Along the Lochs”