The first day of our Scotland roadtrip was pretty heavy on driving and rather uneventful otherwise, but I think it’s best to get that day out of the way first so the fun can begin.

We took the tube over to Heathrow airport in the morning and checked in at the car rental place.  The lady at the desk handed over the keys to our little Fiat and we were off!  Actually, it wasn’t that little (especially for only two people) since they were out of compact cars.  It ended up being quite a comfy ride!  We affectionately named it Milky Tea because of the color.  Amity models: 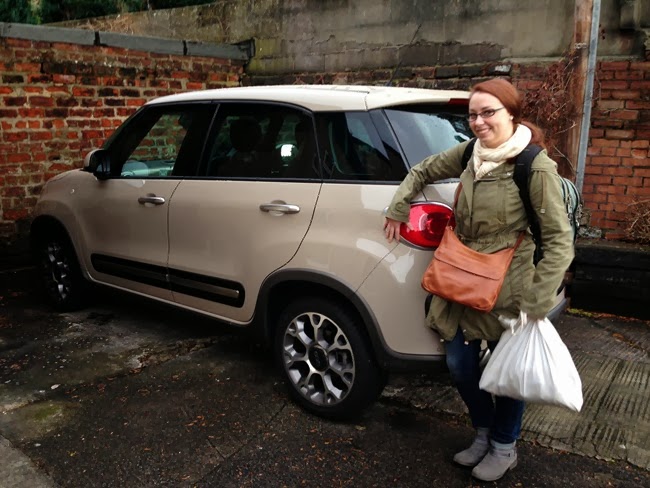 Driving on the left was just as I remember it being in New Zealand: terrifying for the first ten minutes until you sort of switch your brain over and get into the zone.  The drive from London to Glasgow was mostly on big motorways, so we didn’t quite get the idyllic English country drive I was imagining, but it did make the driving itself a bit simpler.  Also, it took us about seven hours, which is more than the amount of daylight we’ve been getting lately, so there wouldn’t have been much point in meandering our way up since we would have been passing a lot of it in the dark.

Towards the end of our trip, things got a bit stormy, but we had trail mix and Harry Potter audiobooks (roadtrip essentials), and plugged onwards.  The weather let up by the time we got to Glasgow and checked in to our little B&B, the Craigpark Guest House. 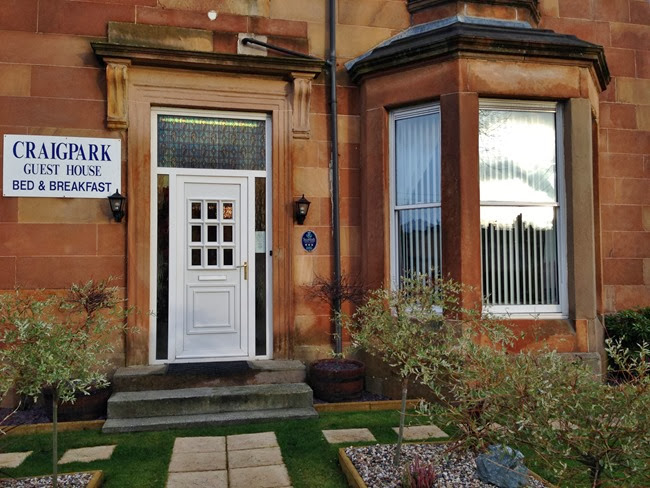 Thomas, the owner, showed us to our room and told us to fill out our breakfast order for the next morning and clip it on the old key board in the front hall.  So darn quaint. 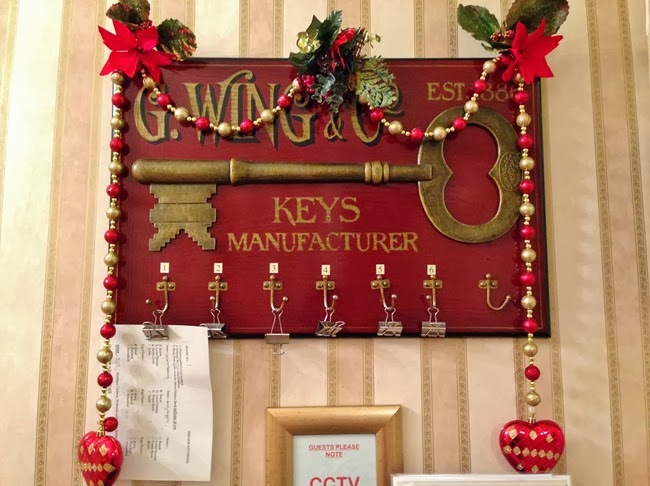 Amity and I dropped our bags and decided to head back into the city centre to find something to eat.  Navigating Glasgow with wet pavement on a Saturday night was definitely the most stressful driving of the trip (including the curvy Highland roads we’ll get to later!), but pretty soon we lucked out and found a street parking spot in the heart of town… and I left-hand parallel parked!!  I’m just going to remind myself of that any time I do something dumb now.

Anyway, we left Milky Tea to enjoy the sights of the Glasgow Christmas carnival as we set off to find some grub. Unfortunately, not much was still open, and I was sort of dazed and confused from driving for so long, so we eventually just grabbed some cold pasta salads from the co-op and ate them in the Glasgow train station, which was actually pretty cool. 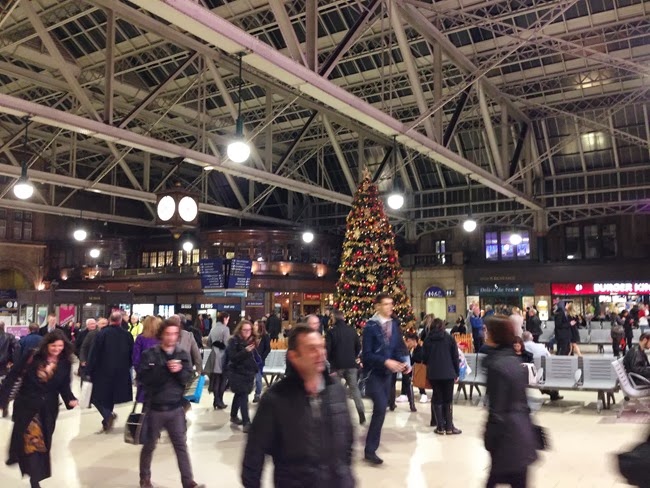 Another building I really liked was the Gallery of Modern Art, although we definitely didn’t have time on our visit to check it out. 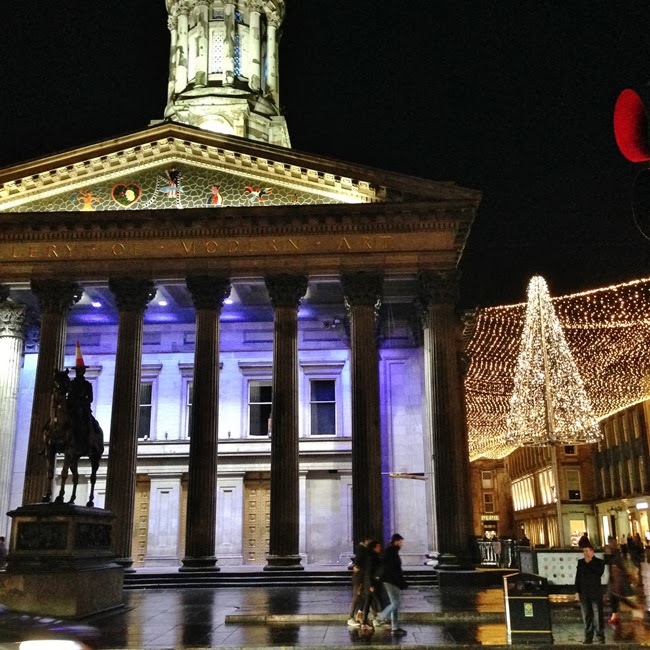 Feeling a bit better for having eaten, we headed back to the town square to explore the Christmas fair a bit more. 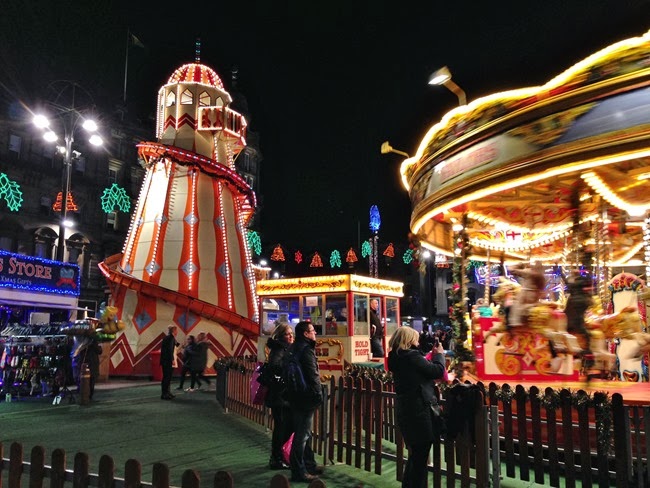 We didn’t go in, but walked around the perimeter watching the carousel riders and ice skaters having a good old time.  At the back of the square was the Glasgow City Chambers, which is that beautiful building next to the big Christmas tree in my first Instagram snapshot. 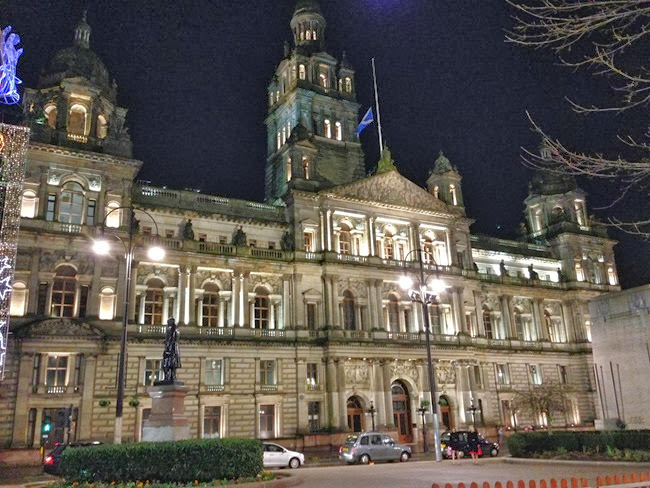 Neither of us had the stamina to wander for long, so pretty soon we bequeathed our prime parking spot to another hopeful candidate and drove back to Craigpark.  We were both pretty tired, so we took it easy and read, knit (Amity showed me how to knit cables!), and watched QI before drifting off to sleep with the rain once again pounding on the roof…

One thought on “London to Glasgow”