On December 24th, I woke up to this beautiful sunrise out of Katharina’s window: 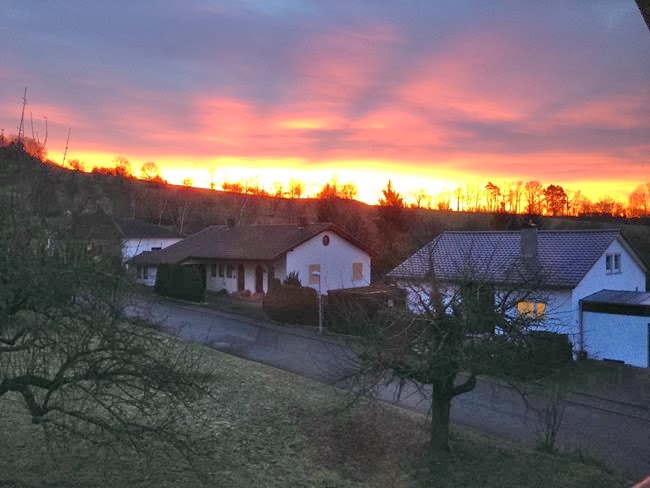 Not a bad incentive to get your day going, right?

We had a leisurely breakfast and multiple rounds of tea and coffee for everyone.  Katharina normally lives a couple hours south of her parents, where she has a teaching job, and her brother and sister were also home from their university studies in other cities.  I could tell that Katharina’s parents loved having their three children home again, and meals were fun, chatty family affairs.  They are all pretty good English speakers and made me feel right at home.  I would never expect them to speak English just for me (I was the one visiting their country, after all), but it was really thoughtful that they made the effort, and it allowed them to teach me a bit of German along the way!

After breakfast, Katharina and I drove just a few miles away from her parents’ little village to the main town centre of Tübingen.  We walked over the bridge that crosses the River Neckar, the same river that flows through Heidelberg.  Katharina told me that they have punting races around this bend in the river every year! 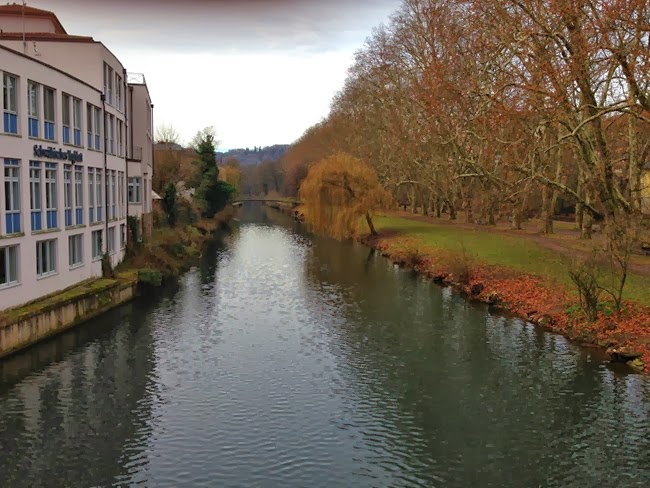 One of the loveliest sights in Tübingen is this row of brightly painted houses right along the river.  It reminded me of Rainbow Row in Charleston, South Carolina (I’ve never actually been there, but my grandparents have a cross-stitch of it that I always liked to look at when I was younger). 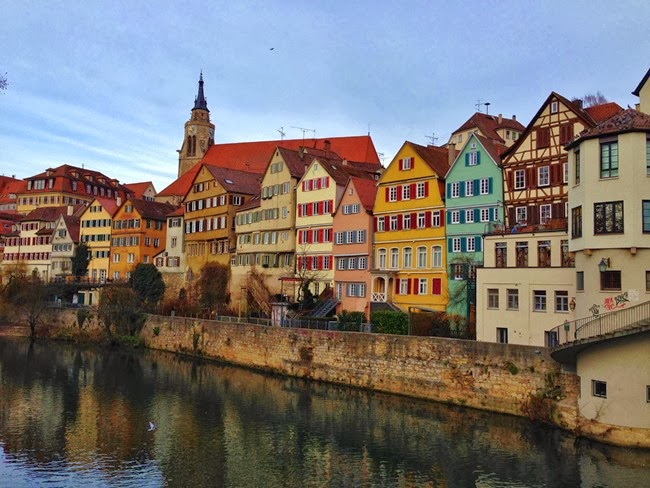 Tübingen is such a quintessentially old-European town.  Apparently, the Alstadt (old town) is one of the only completely intact historic old towns in Germany.  The winding cobbled streets are lined by tall, narrow timber-frame houses and on Christmas Eve, the village centre was still packed with Christmas markets and fresh produce stalls.

Satsumas are a type of mandarin orange that are extremely popular in Europe, especially during the winter (they’re also called Christmas oranges).  I love how markets always leave the dark green leaves on the fruit like this – it’s such a pretty contrast. 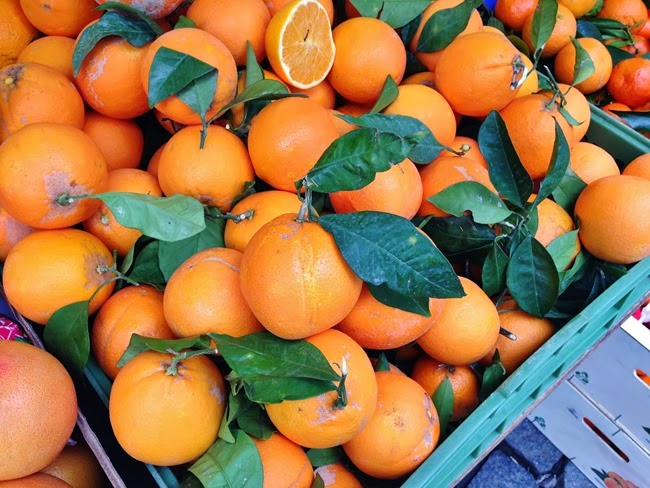 Tübingen is a university town, and since most of the students were home for the holidays at that point, the markets weren’t too crowded and it was easy to wander around without getting stuck.  We walked up to the highest point in the village to see the castle, Schloß Hohentübingen, that’s now part of the local university.  I’ve definitely been racking up my tally of castle views lately! 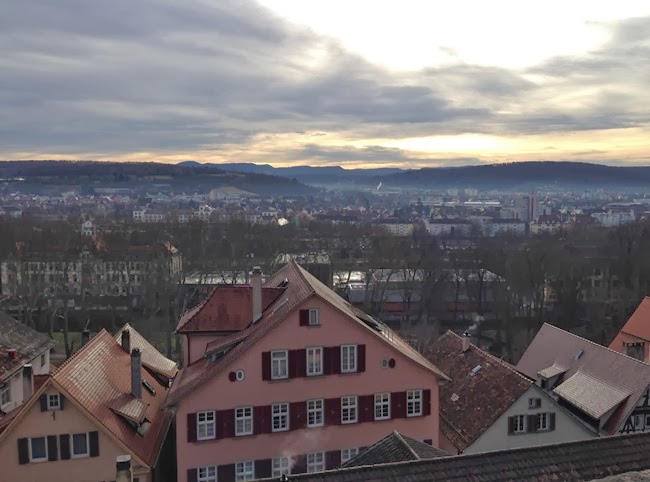 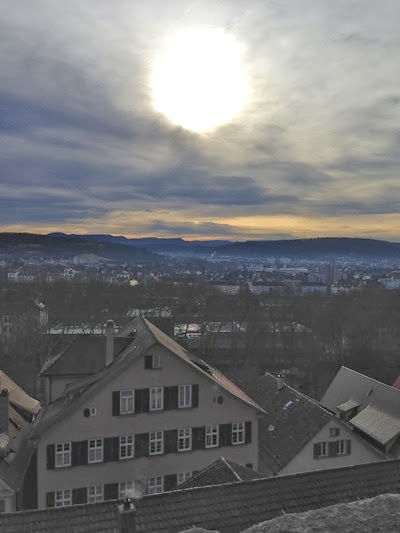 The castle looked out over the village and river valley, and to the forested hills in the distance. 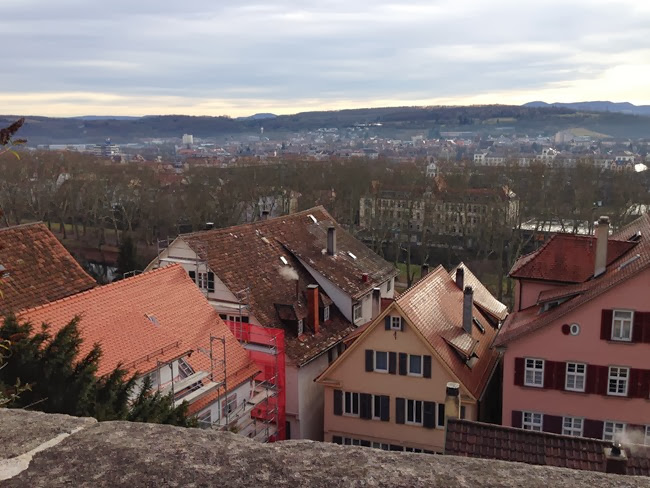 We walked through the main courtyard of the castle, which now serves as art and history museums, research labs, and a few classroom spaces for the university.  It’s also home to the famous “Wild Horse” sculpture, which is one of the oldest man-made artifacts ever found. 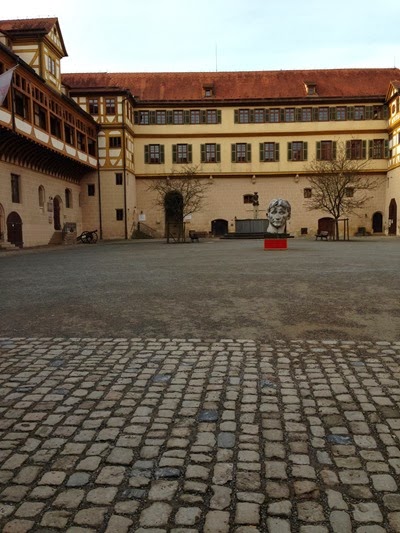 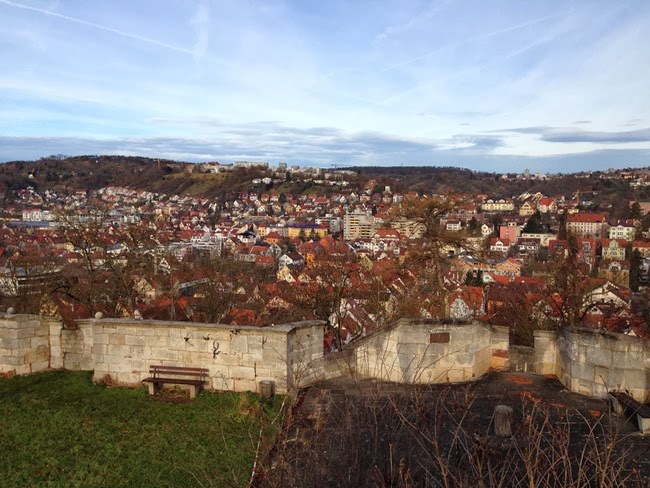 The clouds scampered away as we continued exploring the castle and found our way to some of the castle wall walks and gardens. 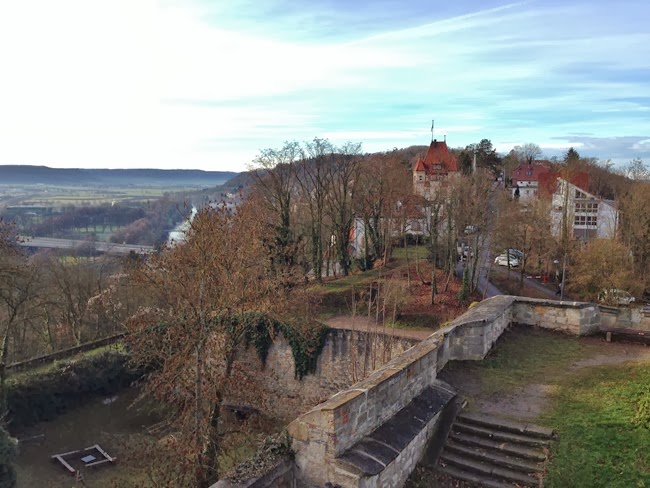 I wanted to live here!  Look at that beautiful river in the background. 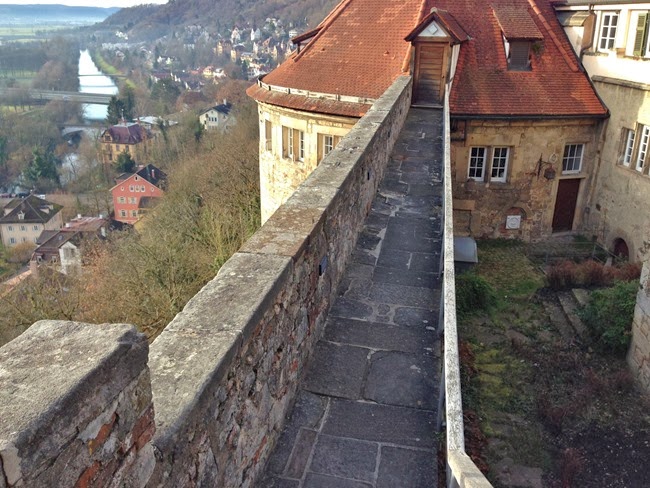 After our wander through the Alstadt of Tübingen, Katharina and I drove back to Wurmlingen and stopped by her grandmother’s house to visit with her family for awhile.  Another of her uncles was there along with his three-year-old son who was entertaining everybody with chocolate-fueled antics.  Some of her family spoke English and some didn’t, but regardless of the language barrier, everyone was so sweet and welcoming.

That evening, Katharina and I went to the Christmas Eve service at the local church with her father and sister.  I could actually follow along with most of the service, and I even knew the German words to “Stille Nacht” (“Silent Night”)!  I knew there must’ve been a reason we had to practice that growing up. 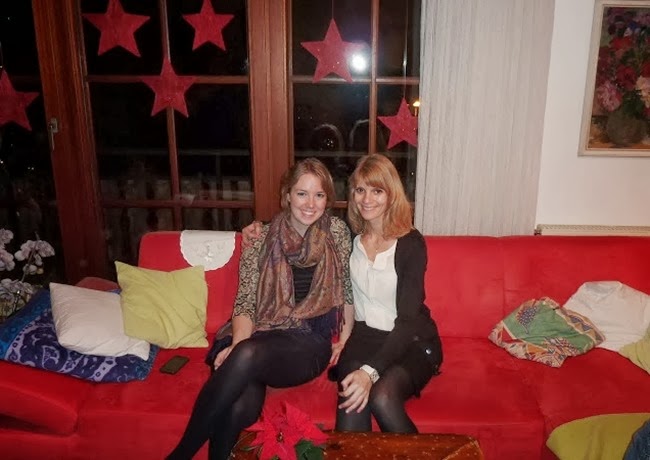 After church, we returned to Katharina’s parents’ house for a big family dinner.  And this was when something very, very beautiful happened.  I was introduced to raclette.  It’s apparently very popular in Europe, especially around the holidays, but I had never heard of it!  There’s basically a big two-tier griddle that goes in the middle of the table (the big black thing in the photos), and everyone picks their favourites from a wide selection of raw meat and seafood that’s laid out in bite-size chunks. 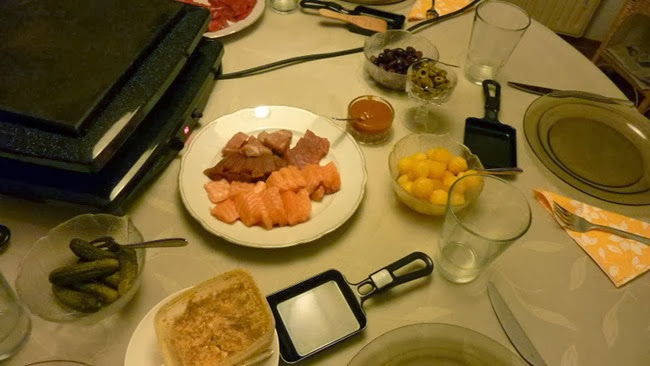 We had pork, beef, lamb, chicken, salmon, tuna… and yep, that’s octopus.  There are veggies and potatoes that are served as side dishes, but my favourite part was the cheese.  See those little black things with handles that sort of look like sand shovels?  You pile yours up with olives, mushrooms, sundried tomatoes, and whatever else you feel like, then fold this big slab of raclette cheese over the top and stick it in the side of the raclette grill, underneath the top level where all the meat is browning. 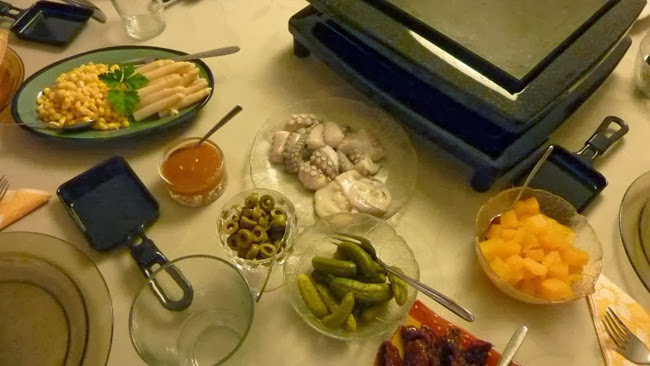 Everyone throws their meat on the grill and starts melting their cheese all at once, so it’s a very interactive, communal way of eating – I loved it!  It was fun, too – you’re guaranteed to run into some shenanigans when someone accidentally grabs somebody else’s meat from the grill, or some squidgy octopus goes bouncing out of reach of your fork.

After dinner, Katharina and I Skyped our friend Erika to wish her a happy birthday, and our dynamic trio from the roadtrip we took around the South Island of NZ was (almost) reunited! 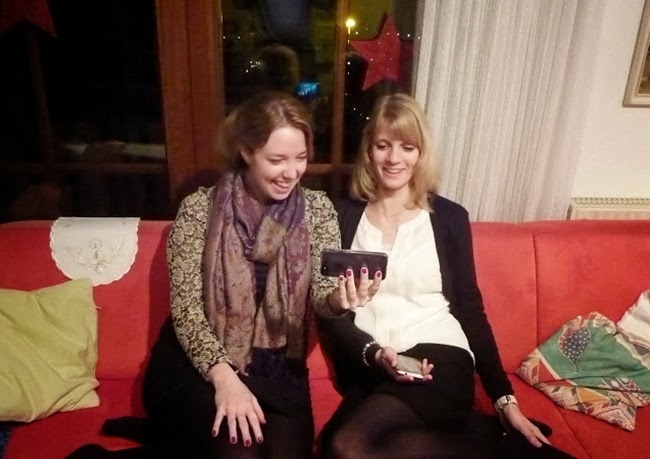 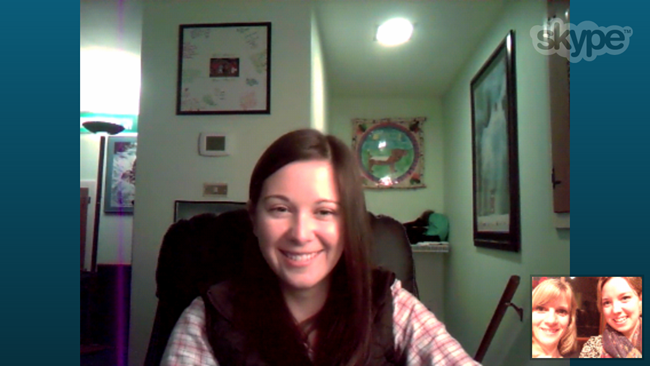 It was so much fun to all talk together again, reminisce about our past adventures, and daydream about a real reunion someday!  We also called our other NZ mate (and one of my flatmates) Chelsea, before cutting it short as the rest of the family began to wander back in for Christmas festivities. 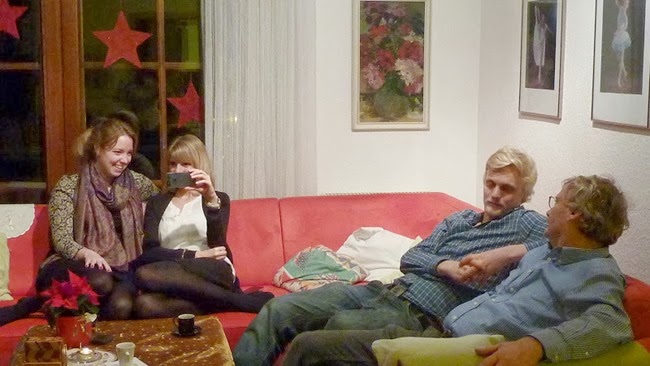 In Germany, the main day of celebration is Christmas Eve rather than Christmas Day.  We all gathered around their pretty Christmas tree with coffee and Christmas cookies and prepared to open presents. 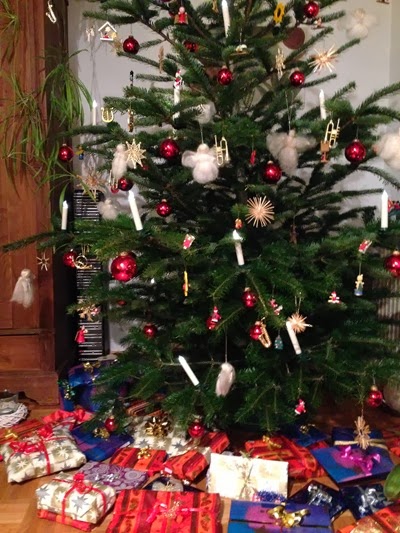 I was just really enjoying being in such a cozy family atmosphere and was happy to watch them all exchange gifts, but Katharina and her mom had gone way overboard, and I had almost as many gifts sprinkled under the tree as anybody else!  It was wholly unnecessary but still really, really sweet of them.

The absolute best were these two calendars with are now hanging side by side next to my desk: 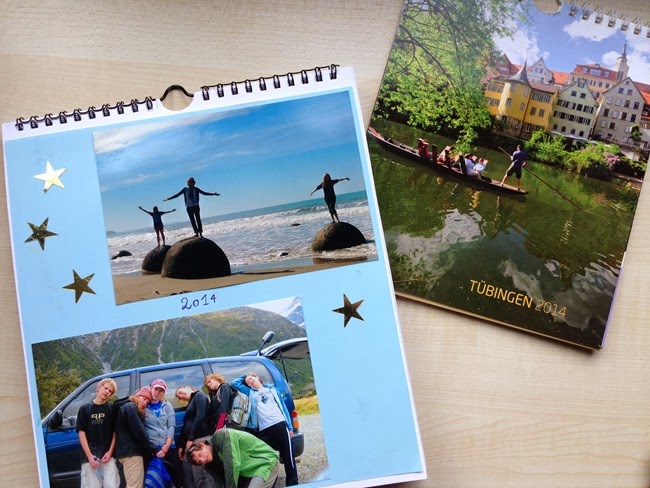 The one on the right is from Katharina’s mom, and it has lovely scenes of Tübingen for every month of the year (including punting next to the rainbow row on the front!).  The calendar on the left is handmade by Katharina and it’s packed with photos of us during our time in New Zealand – some of which I’d never even seen before!  It was especially sweet because Katharina and her brother and sister make a calendar of like this of family photos for their parents every Christmas, and it was really touching to be included in their family tradition.

Between these two and my amazing Geneseo photo calendar, I don’t think I’m in any danger of a lack of beautiful scenes to gaze upon… or of forgetting what month it is.

5 thoughts on “Christmas Eve in Tübingen”