“For my part, I travel not to go anywhere, but to go.  I travel for travel’s sake.  The great affair is to move; to feel the needs and hitches of our life more nearly; to come down off this feather-bed of civilisation, and find the globe granite underfoot and strewn with cutting flints.”

— Robert Louis Stevenson, Travels with a Donkey in the Cévennes (1879)

After a really excellent breakfast by Doreen (seriously, best bacon I’ve ever had) and “tea for two!” as she always said, Amity and I were ready for our first full day in Edinburgh.  Even though the forecast had said it was supposed to get stormy and really windy, it didn’t look so bad yet, so we decided to take our chances climbing Arthur’s Seat. 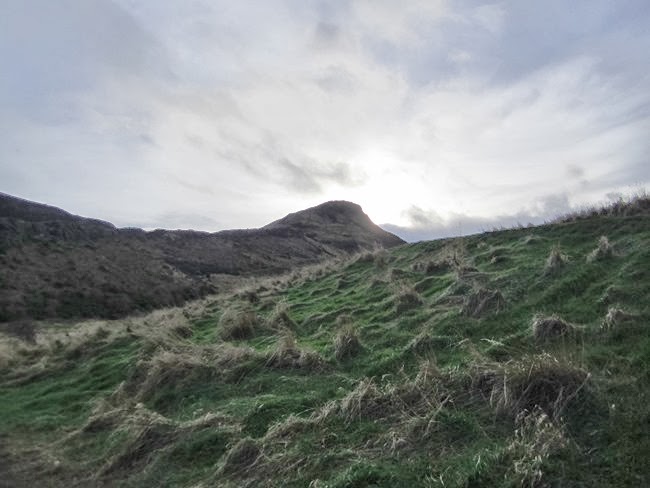 I’d heard it’s a definite must-do in Edinburgh – a high rocky, grassy hill that gives you panoramic views of the city and the Firth of Forth (the large body of water that Edinburgh is built around).  My dad recommended it from when he visited Scotland a few years ago, and it’s also where Rupert Grint and Julie Walters sit and have their heart-to-heart in Driving Lessons!  (Sidenote: See ya tomorrow, Rupert!)  Basically, I reallyreallyreally wanted to do this and Amity was a very patient friend.

We walked east to the Palace of Holyroodhouse (the Queen’s official residence when she’s in Scotland) and began the climb from there. 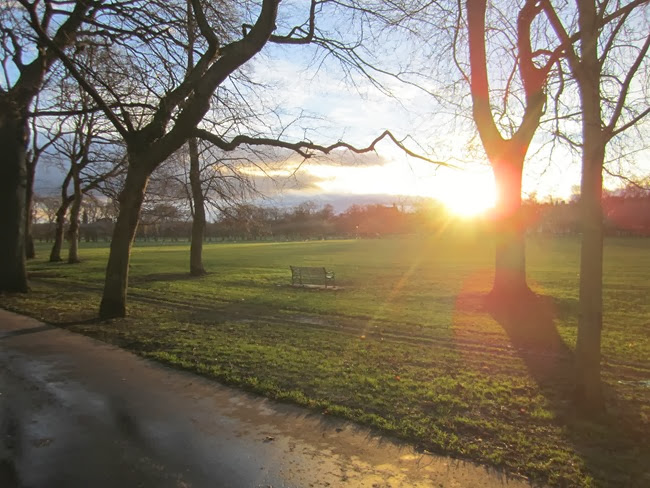 The path was easy going at first – just a gentle upward slope – but it quickly became steeper and more rocky. 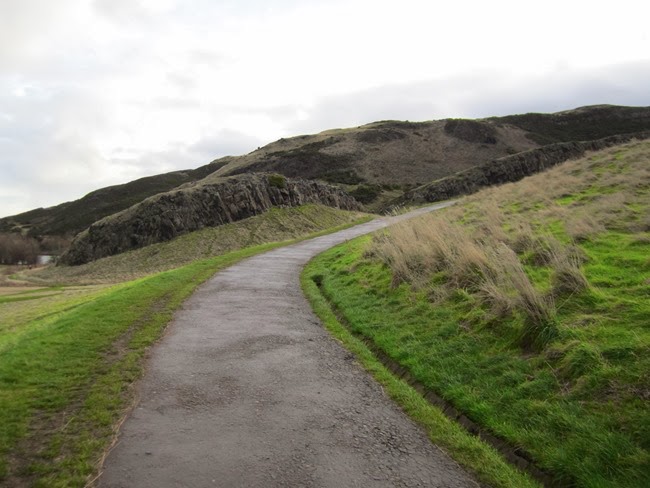 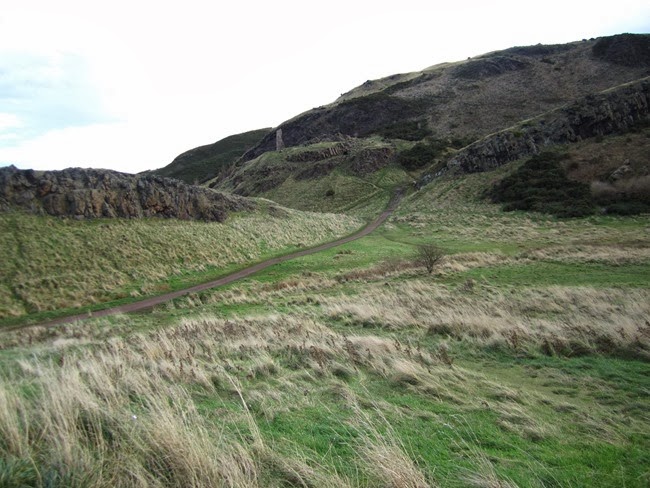 There were a handful of people walking their dogs in the lower parts.  It was so perfect to see border collies frolicking in the hills of Scotland!  It made me smile to see such happy dogs and such nice owners.  Townes would’ve loved it. 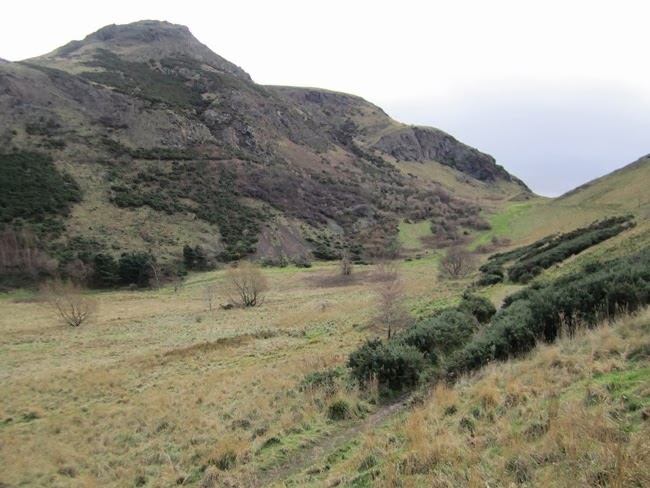 This was more like strenuous walking than actual hiking, but it had the same benefits: even when it’s tough, the views are so worth it! 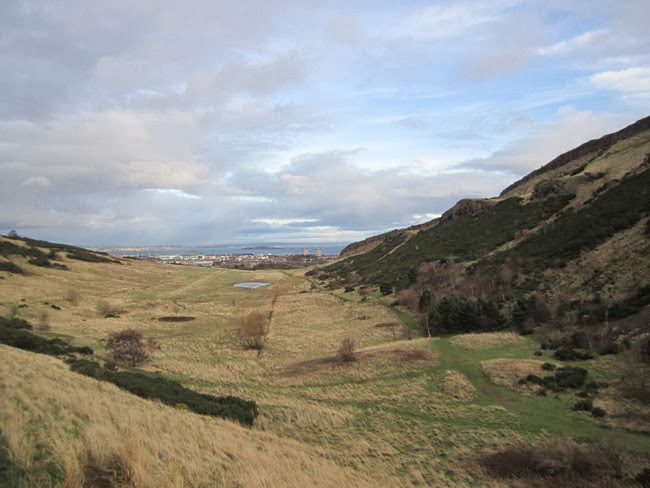 There’s always such a great sense of accomplishment and a gorgeous view at the end (Am, I can actually feel you rolling your eyes at me right now). 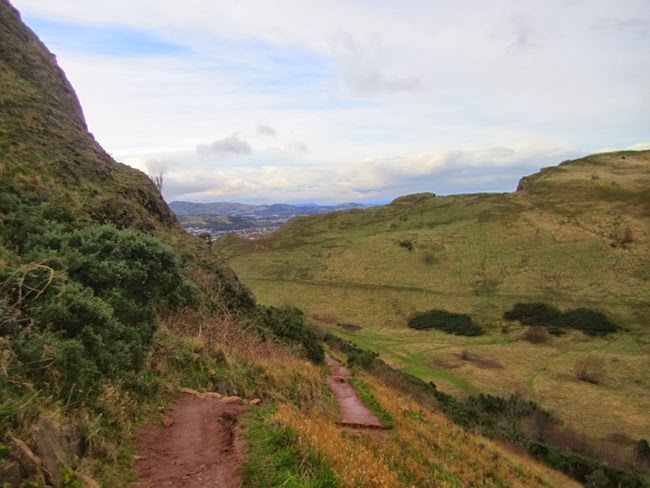 This was only about halfway along.  The higher we climbed, the windier it got.  I was really glad I had my big puffy parka on. 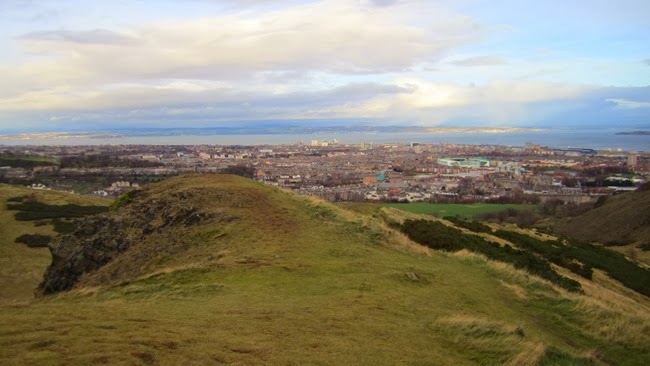 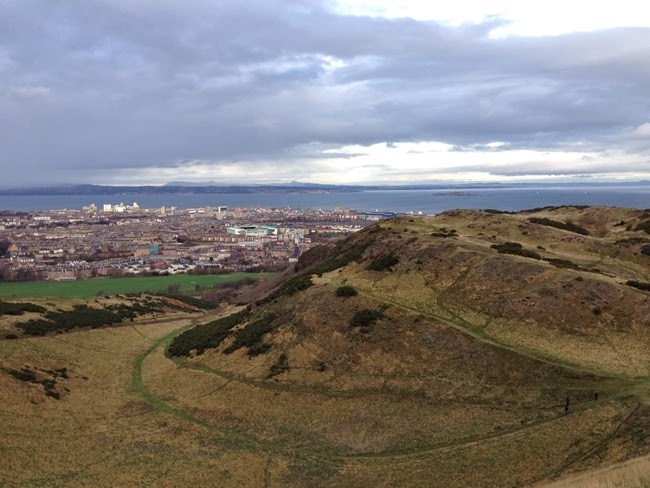 Once we finally reached the summit, it was insanely windy.  We later learned that there had actually been gale-force winds that day, which was not hard to believe. 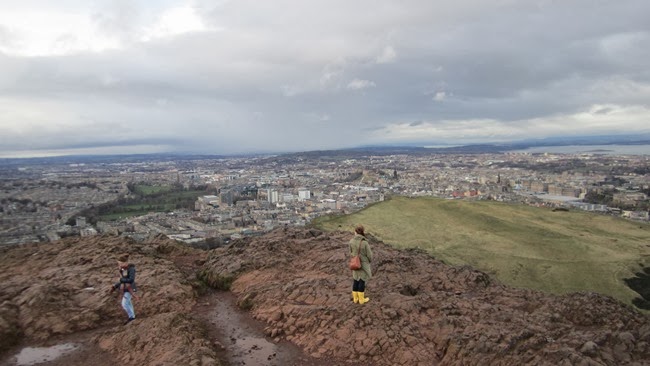 You actually had to hold on to something or the wind would quite literally blow you off the mountain!  The very highest point was all craggy rocks.  There were two little cement pillars – one with a map pointing out all the landmarks you could see from that vantage point (you can see three guys clustered around this one in the photo below), and another marking the highest point on Arthur’s Seat. 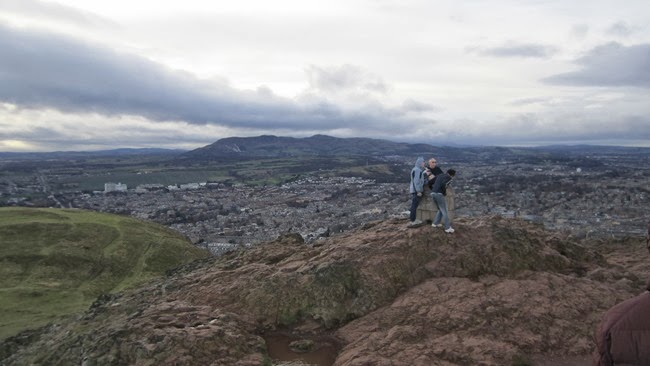 I scrambled up the rocks and clung on to the second pillar to take in the awesome panorama below.  In some ways, it really reminded me of the view of the Canterbury plains and Lyttelton Harbour that I saw on the Christchurch Grand Tour. 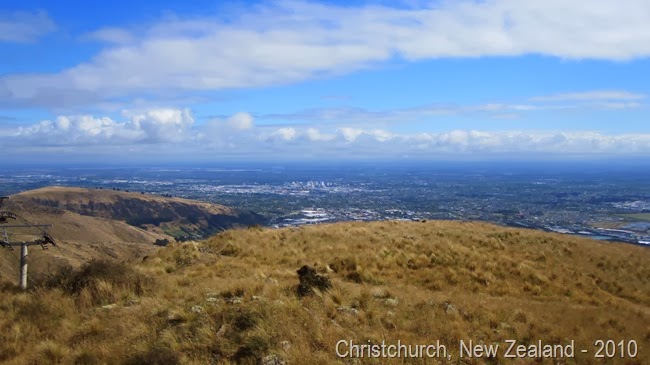 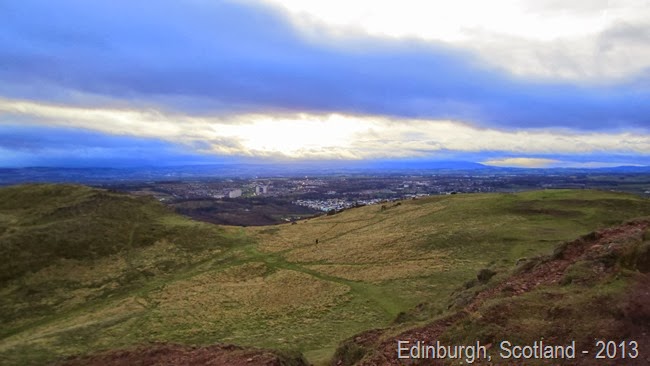 Pretty similar, right?  Although Christchurch was definitely enjoying much balmier weather that day!  The clouds really started rolling in as I hunkered down between outcrops, trying to get a few more pictures. 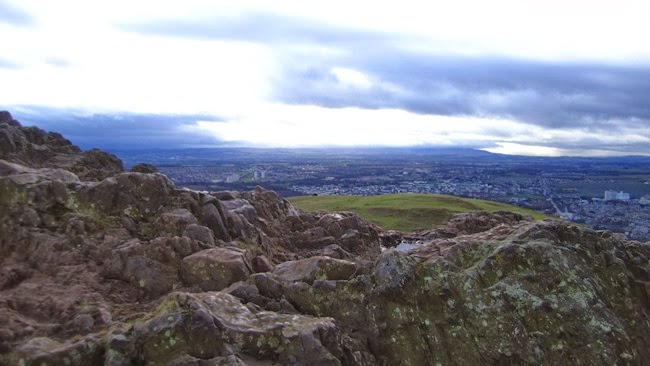 I loved it.  I loved it so much.  I could have stayed up there for hours (although if I’d actually prepared for that, I would have brought a thermos of tea and something to tie myself on to the mountain with).  To borrow Amity’s words, I do actually like “being bowled over by deadly gusts and having nothing but sharp craggy cliff faces to hang on to.”  I get it from my dad.  Amity and I were about as divided on the enjoyability of Arthur’s Seat as we are on the aesthetics of the new Scottish Parliament building, but variety is the spice of Flat 12, as they say.  We soldier on. 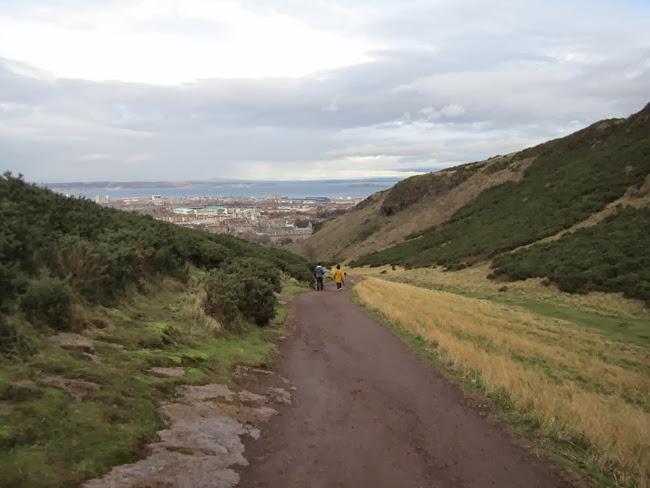 We started back down, which was equally as tough as going up in such strong wind.  We were a bit muddy and sore by the time we reached the bottom, but I was so glad I could check Arthur’s Seat off my Edinburgh bucket list.  We were also pretty worn out from being battered around by the wind, so we wandered through town to find a nice little café.  We looked into The Elephant House (famed as the birthplace of Harry Potter… the books, not the character… that would be weird), but it was absolutely packed.  We eventually found some nice window seats in a little Starbucks and sat for a while, picking out our dream homes in a local real estate magazine and trying not to fall asleep in our chairs.

When we left, we were still really tired but felt like we should keep making the most of our time in Edinburgh.  We were very close, so we decided to revisit Greyfriars Kirkyard since we’d only made a quick pass through with Billy the day before. 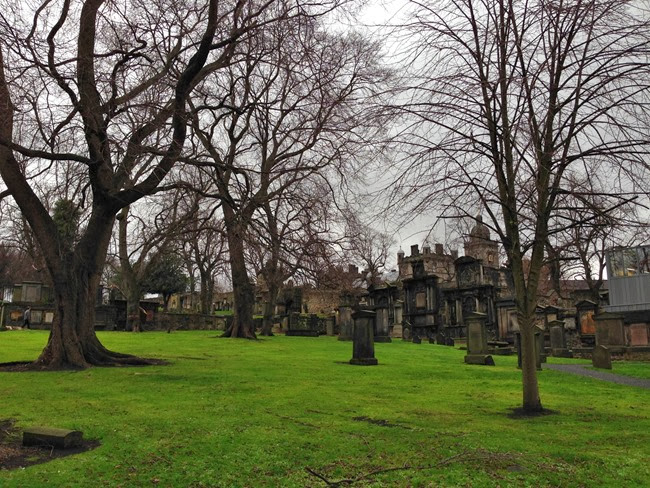 There were no other visitors in the cemetery that day except for a solitary groundskeeper, so we took our time reading the old gravestones and looking at the markers and monuments. 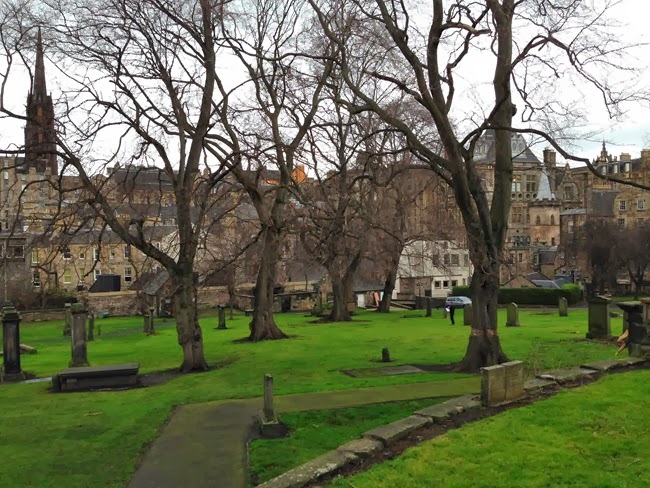 We saw the grave of Thomas Riddell, which was J.K. Rowling’s inspiration for the name of Lord Voldemort’s character, and tried to pick out William McGonagall (both the inspiration for Professor McGonagall’s name and the worst poet in the history of the English language), but for whatever reason he’s buried in an unmarked grave.  Probably embarrassed, poor chap.

Afterwards, we went into the National Museum of Scotland, intending to take in all the interesting exhibits and artifacts, but we were just too dazed and worn out to appreciate it properly. 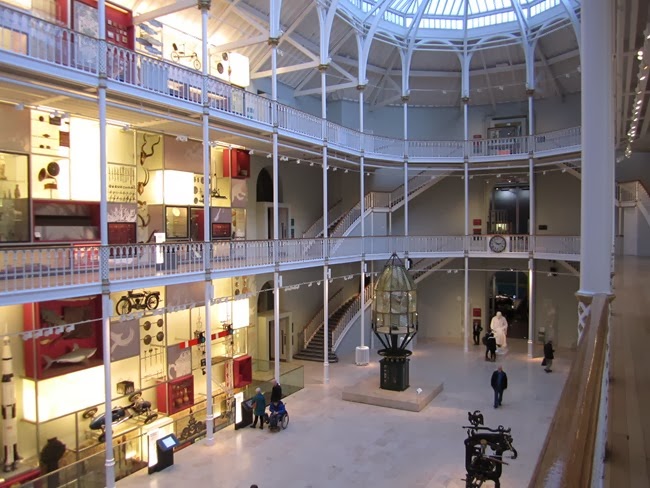 At least Amity and I were both on the same page about that, so pretty soon we decided we had to give in and just call it a day.  We stopped quickly into The Elephant House, which was much less crowded than before.  Though I’m sure it has quite a different feel than it did when J.K. Rowling actually sat there writing the first Harry Potter book, it was still a charming little place.  I had tea and something called chocolate tiffin, which was really magical and led to an immediate friendship with the older gentleman sitting next to me, who was eating a slice himself.  Amity and I were tucked back in our room at the StarVilla by 5pm (we actually ate trail mix for dinner to avoid going out again… roadtrip highlight).

And finally, I can’t really fit it fluidly into the narrative of the day, but it has to be included.  We also saw this: 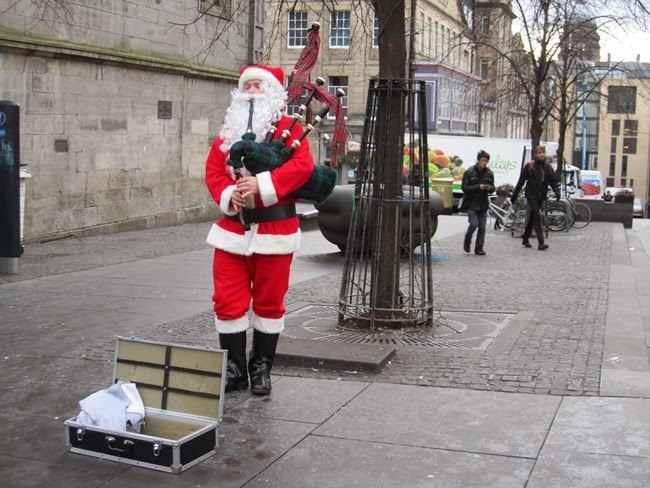 Happy Christmas from the bagpiping Santa, everyone!