I’ve been a little MIA the past couple of weeks because (1) it’s almost the end of term and schoolwork has increased by a NOT COOL AT ALL degree, and (2) I had a Geneseo friend in town!

Kate and I became friends during the very first class of our college careers, when we sat next to each other on the couch in Welles and immediately bonded over our professor’s super weird jokes and the 518.  Fast forward to now and Kate’s finishing up her final year of law school in Boston and, in a completely bizarre twist, she lives in the same building as my flatmate Chelsea from NZ.  Magical worlds collide.

Anyway, since Kate is taking the bar exam this summer and then immediately becoming a super professional grown-up lawyer, she figured she had better take advantage of her spring break this month… so she came to London!

We had lots of adventures during her week here, and one of my favorites was our “St. Paul’s Day.”  I’ve determined that you have to have a dedicated St. Paul’s Day when you have a visitor in London.  There’s so much to see in a relatively small area, and the views from Millennium Bridge are second to none.

We took the tube to London Bridge and did my usual walk through Southwark backwards (I stick to what works).

It was beautiful, glorious weather!  Flawless blue sky with only the occasional cottony clouds scudding past overhead.

We took our time walking over Millennium Bridge so that we could appreciate the views, and stopped for a couple photos, which make it look like Kate was taking her Hobbit friend out for a walk.

I’ll pause for a moment while you wipe the tears of laughter from your eyes, Mom.

Anyway, it’s not so bad if you cut off our legs:

I am allowed to look like a Hobbit when I’m standing in front of a gigantic cathedral!

…but our tummies were rumbling so we had to put our sightseeing on hold until we’d had lunch.  We went to the B.O.B.’s & Co. popup above The Rising Sun pub, which Amity and I had tried out last month and given rave reviews.  They had me at “lobster rolls in London.”

I wish I could say we’d been adventurous and tried something new, but we actually ordered the exact same things that Amity and I had done.  It was all just so dang good that I couldn’t bear to deviate!  We split the ahi tuna tacos and seared scallops apps, and each got our own lobster roll (with housemade mayo and fresh dill) and plum margarita.  Okay, maybe two plum margaritas.  Everyone knows that the best thing before a strenuous climb is heavy food and a few drinks, right?  No?

Anyway, following that fantastic feast (I’m alliterating like crazy today!), it was just a hop skip & a jump back to St. Paul’s.

We paid our entries and picked up the free audio guides, then proceeded to wander slowly through the cathedral for about half an hour, listening to the history and descriptions of different features.  We also got really good at starting our audio guides (which were actually iPods – #swanky) at exactly the same time.

The inside of St. Paul’s is breathtakingly beautiful.  I’d been inside a couple of times before, but always on a Sunday, so I didn’t go much farther than the doorway or the last row of seats so as not to disturb the services.  The ornate mosaics and intricate stained glass windows in the middle part of the cathedral were astounding!

No photos are allowed in the interior, but I did snap this one of the screen on my iPod so you can see how St. Paul’s is actually two stacked domes with a conical piece between them.

This was a particularly brilliant design of the architect, Sir Christopher Wren, who realized that the lower dome was necessary so that people could clearly view and enjoy the detail from inside the cathedral, but a higher dome would be needed for it to be seen and make an impressive statement from far away.

We made our way up the wide, twisting staircase to the Whispering Gallery, which is at the base of the lower dome and still inside the cathedral.  The perfectly circular gallery runs all the way around the dome, and the arching ceiling above your head carries whispers all the way across to the other side.  It’s like the part of Grand Central Station where you can hear people talking from across the way.

Kate and I split up and tried to whisper to each other from across the dome, but were overshadowed by a very enthusiastic St. Paul’s employee who was scurrying about and whisper-shouting “WHISPAH!  WHISPAH!  HELLOOOOO EVERYBODY!  WHISPAHHHH!”  It was hilarious, but unfortunately I cannot give you a conclusive statement as to whether or not the Whispering Gallery actually works.

We headed up some more steps to the Stone Gallery, around the base of the higher dome.  The clouds had rolled in since we’d been down on the ground, but it was still bright and vibrant.  I can’t even describe the view.

Objectively, I know it’s a lot of gray with a bunch of cranes in the way, but to me it was just the most beautiful sight.  I was having a real mushy moment with London that day.  I just kept thinking, “I love this city.”

Looking back across Millennium Bridge:

The bell towers tolled 3:30 while we were up there.  I loved that you could see St. Paul’s while standing on St. Paul’s!

We ducked back inside to make the final climb up to the tiny Golden Gallery, around the pinnacle of the tallest dome.  The staircase is pretty crazy.  When you look up, it looks like this:

And when you look down, it looks like this:

But when you reemerge into the fresh air, it looks like this!  Well worth the 528 steps from the ground up to this point.

We made a couple new friends and swapped photos with them.

And took a few more twirls around the gallery.  Name those London landmarks!

We even had a direct view on to the roof of St. Bart’s Hospital…

… which is where Sherlock jumped from in “The Reichenbach Fall.” 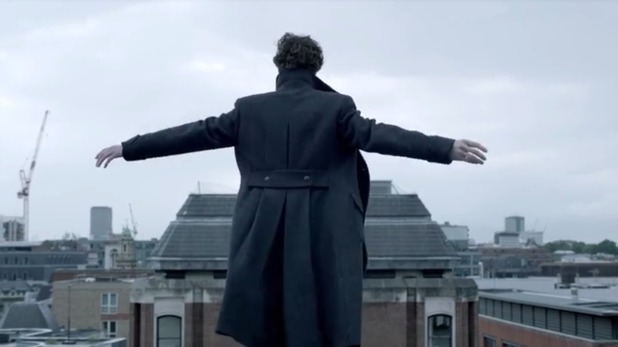 But never fear, I kept a weather eye on the place to make sure that Bento Tinderbox wasn’t sneaking back to try again.  All good.

We took a last glance around before heading back down the harrowing staircases.  We also peeked into the crypt for a few minutes, which I’d like to go back and revisit more thoroughly, but unfortunately they were closing up and we had to hurry on.

Bizarrely enough, when we got back outside the sky looked like this again.

I actually double checked my photos to make sure I hadn’t gotten them in the wrong order – nope, I took that one after we climbed the dome.  Crazy London weather.

One great part of having a visitor was that it allowed me to play tourist in lovely London town again!  Aye, she is a beauty.