There are countless things to see and do in London: museums, shops, theatre, eateries, historic sites, parks and gardens… I have a feeling you could live here for years and still not have seen everything.  Luckily, the city has a ton of great programs and offers that are designed to make the sights more accessible.  They’re especially eager to involve young people in arts and history, which is how Amity and I were able to score tickets to some awesome shows coming up!

The Historic Royal Palaces is an organization which oversees the Banqueting House, Hampton Court Palace, Kensington Palace, Kew Palace, and the Tower of London.  Amity and I signed up for membership, which will allow us free and unlimited access to all five of the palaces for the next year.

We decided to get a move on and spent last Saturday morning visiting the Tower of London! 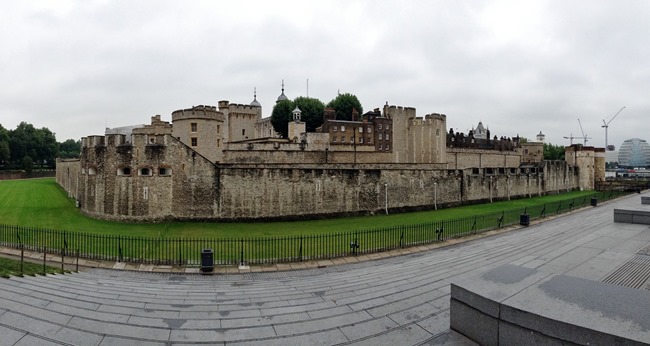 We were up bright and early, out the door by 7:30 and hopping off the tube at Tower Hill in plenty of time to catch the official unlocking of the tower gates at 9am. 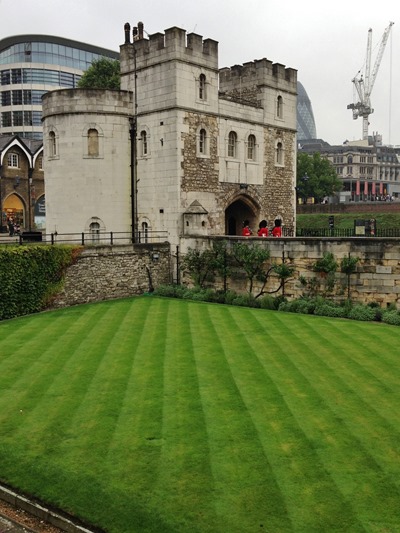 An armed royal guard stills escorts the keys to and from the gate as it’s unlocked every morning.  As they march, they shout appropriate instructions such as, “Escort the keys!”  Just to be clear, I guess. 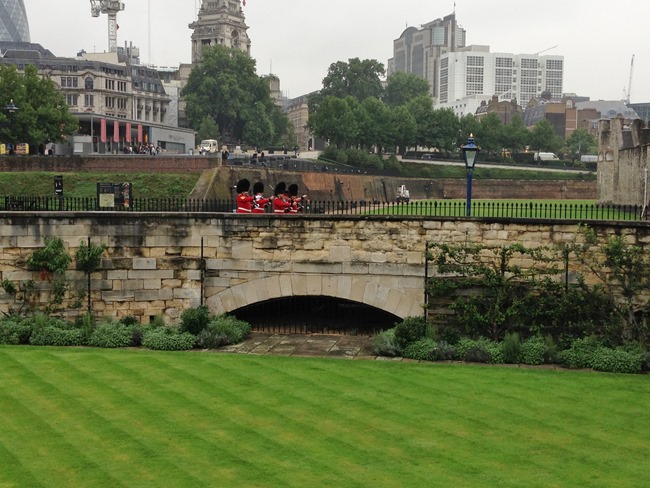 We also got a great view of Tower Bridge from the wharf.  I don’t know why exactly, but I’m more awestruck by this structure than by any other building in London so far.  It’s just so beautiful and impressive to me.  Big Ben and Buckingham Palace are neat, but they just don’t do it for me like Tower Bridge does.  Mmhmm. 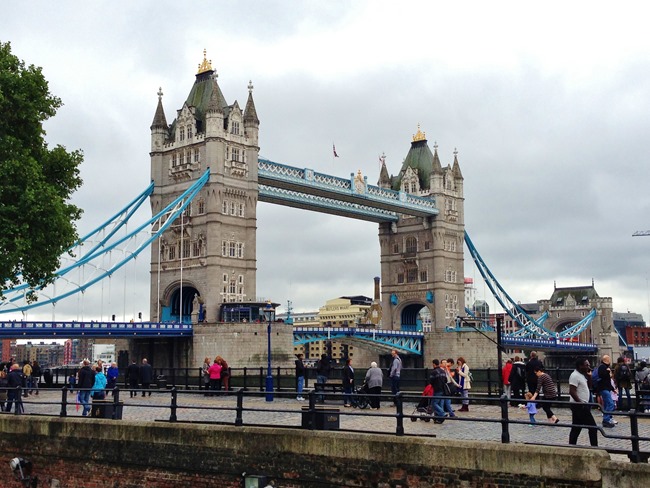 Our original plan was to hop on one or two of the guided tours, but we found that we could explore just as much (and beat the huge queues) by wandering about by ourselves, so we set off.

The Tower of London was built beginning in 1066 by William the Conqueror, more as a symbol of intimidation and power than an actual military fortress.  It was expanded, altered, and added on to over the centuries by different monarchs and historical events.

Inside the gate, it felt like a miniature city, with cobblestone streets and huge fortress walls on either side of us. 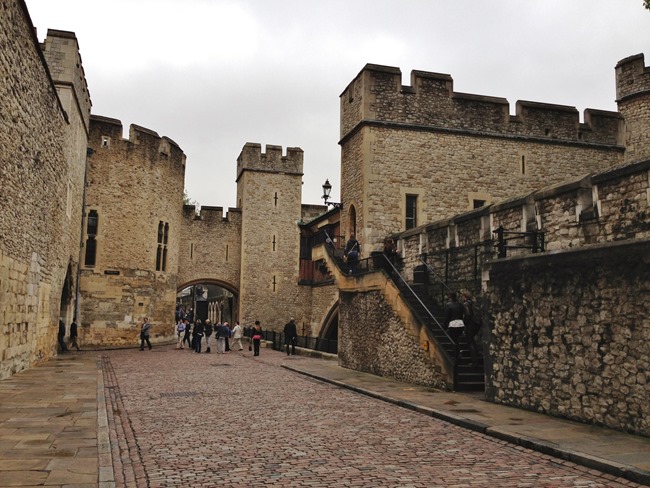 We ducked into any little alcove we found along the way for a peek! 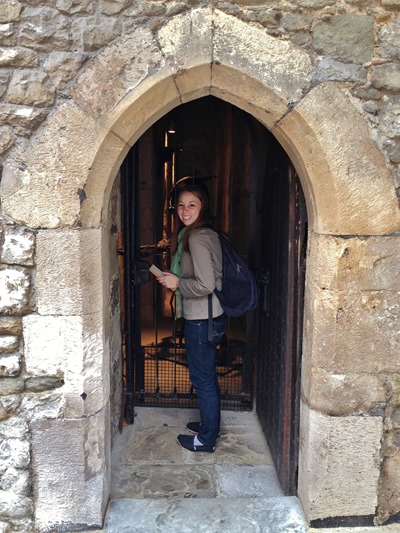 One of the first things we came across was Traitors’ Gate, the water gate through which many prisoners entered the Tower.  It was sort of spooky-looking and I could just imagine guards in rowboats bringing manacled prisoners in by candlelight at night. 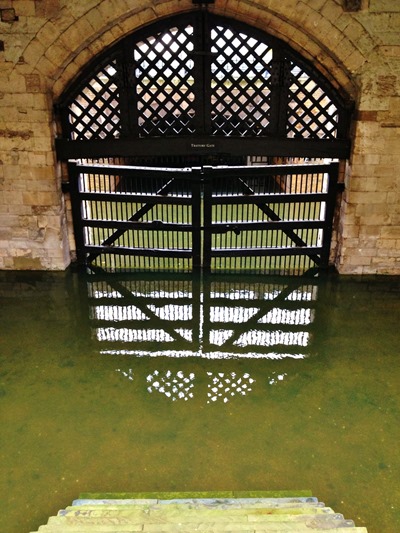 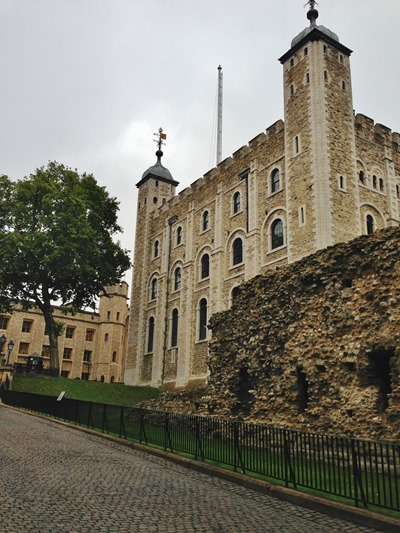 That crumbling wall in front of the White Tower is the remains of Coldharbour Gate, which was built by Henry III in the 1230s as an added defense.  The gate and wall were mostly demolished in the 1600s, then concealed by later buildings, and finally uncovered again by bombings during World War II.  Lots of excitement for a little stone wall, huh?

Since we’d gotten there right at opening, the Tower still wasn’t too crowded and we decided to take advantage of that by visiting one of the most popular attractions first: the Crown Jewels of the United Kingdom!  The display is housed in the Waterloo Block, and guarded by two very serious ravens. 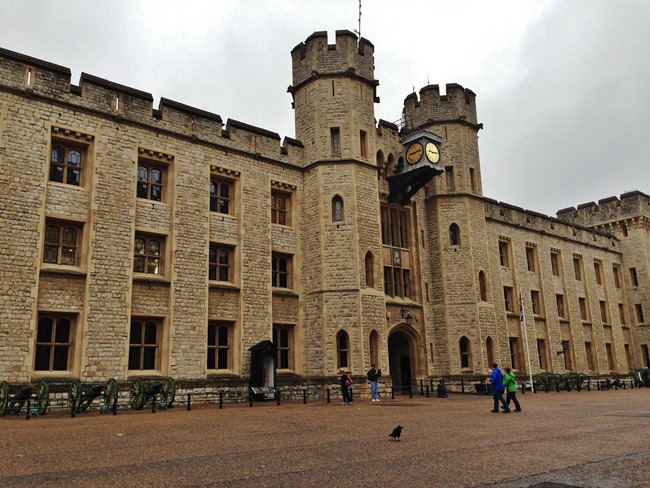 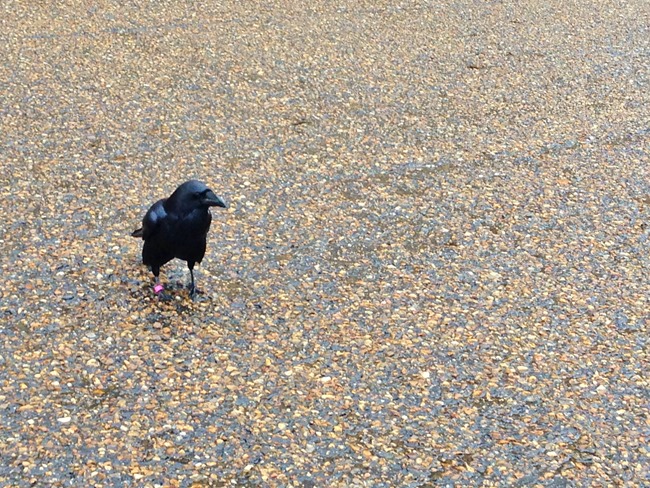 I mean it.  Those guys were HUGE.  They were also oddly nice-looking when you got up close.  Their feathers were deep black and had a sort of rainbow sheen like an oil slick.  They also made funny sounds where they puffed out their chest feathers and warbled like a bullfrog.  I was expecting them to squawk or something, but I guess I was thinking of crows.  Poor old ravens.  That probably happens to them a lot.  I’ll stop waxing poetic about birds now.

Anyway, there’s no photography allowed inside the Crown Jewels exhibit, so I snapped this last photo on our way inside: 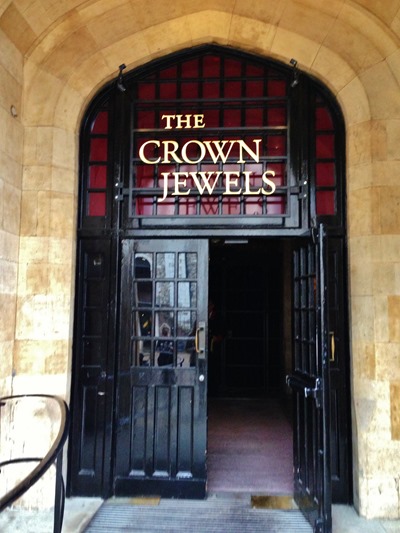 Amity and I both thought the Crown Jewels collection was amazing.  A few highlights…

We reemerged from the Crown Jewels exhibition to find that it had started drizzling (ah, surprise!).  The rain was so light that it was almost more like a really wet mist, and we could see it sitting heavily on top of the city when we got a view over the Tower walls. 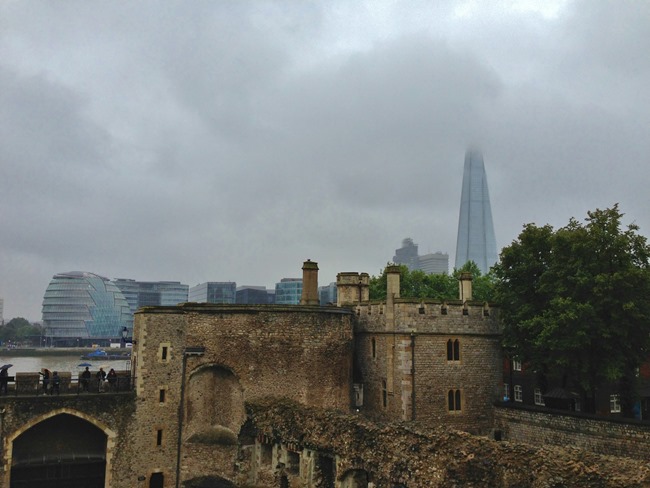 Look at The Shard on the right – we couldn’t see the top!  It reminded me of the day Erika, Katharina, and I visited Milford Sound, and it was so misty that the top of Mitre Peak was completely obscured.  Coooool.

We escaped the damp weather by heading into the White Tower (not to be confused with the pinnacle of Gondor, duh).  On the way up the entrance steps, we passed the staircase under which the skeletons of the Princes in the Tower were discovered.  You should look up the whole story, it’s fascinating.  The stuff of legend, really, as well as Shakespeare’s play Richard III – but here’s the short version.  The princes were Edward V and his younger brother Richard (about 12 and 10, respectively), who were heirs to the throne.  In 1483, they were confined in one of the towers by their uncle, Richard III, who declared them illegitimate heirs.  Richard III was made king and the princes disappeared.  They were always presumed murdered (at the hand their dastardly uncle, most likely, although there are a few weaker suspects as well), but that theory was on track to become just a ghost story until the skeletons of two boys aged 10 and 12 were found in 1674, buried in a wooden box underneath a staircase in the White Tower.  The story of the Princes in the Tower is one of the main reasons the Tower of London has acquired such a bloody and sinister reputation.  Oh, and the beheadings.  They definitely contributed.

Anyway, let’s go on in!  The White Tower is home to the Line of Kings, an extensive exhibition of armor and weaponry dating back hundreds of years.  The entrance was lined with artists’ impressions of the exhibit, which first opened in 1688 and is “the world’s longest running visitor attraction.”  My favorite was this floor-to-ceiling painting by an unknown artist from the early 1800s. 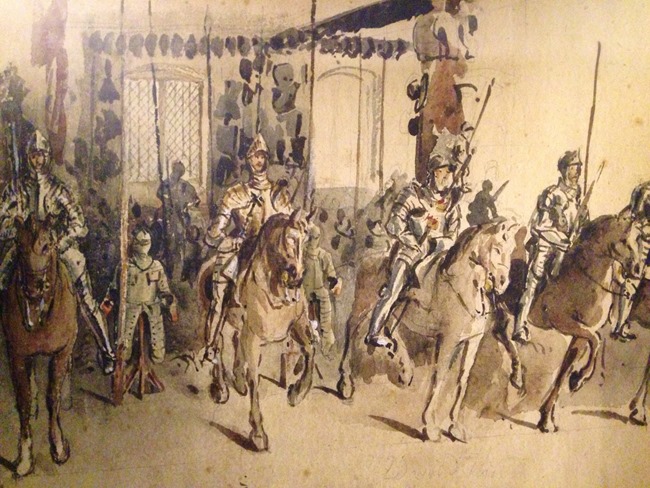 The Line of Kings was really impressive, and the grandeur of the displays was added to by the fact that much of the armor was arranged on life-size wooden horses, each carved by a different court-commissioned artist. 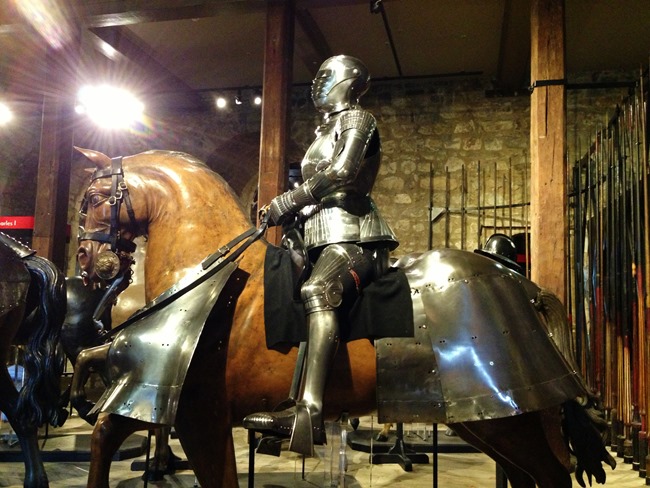 We wandered upstairs to this cavernous hall, which took us through a history of some of the different architectural features and changes the White Tower has undergone. 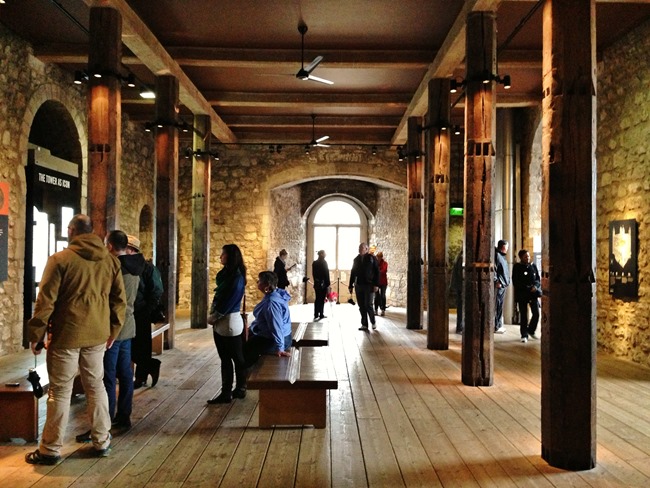 The rest of the building included more museum-ish exhibits on different aspects of the Tower’s history.  It was all so, so interesting, and having it laid out in such a cool old fortress made it much more intriguing than ambling through a regular museum.

Next up was the exhibit commemorating the Royal Menagerie.  It’s not there anymore – the animals were all moved to the London Zoo in 1832 – but it looks like we missed out on some pretty rad events. We were only 157 years too late to see the annual washing of the lions.  Dang it!

Ahh, the main event.  Ye olde axe and chopping blocke.  No, they didn’t have a guillotine.  Where do you think we are, France? 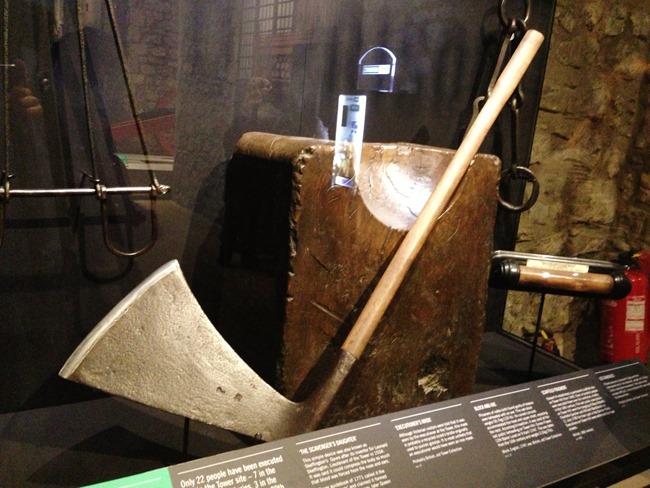 This pair were used only for prisoners of noble birth, and were in fact used for the last public beheading on Tower Hill in 1747.  Yikes!  And not only were they in a glass case for visitor viewing, but they were also memorialized on a pretty hilarious T-shirt in the gift shop. 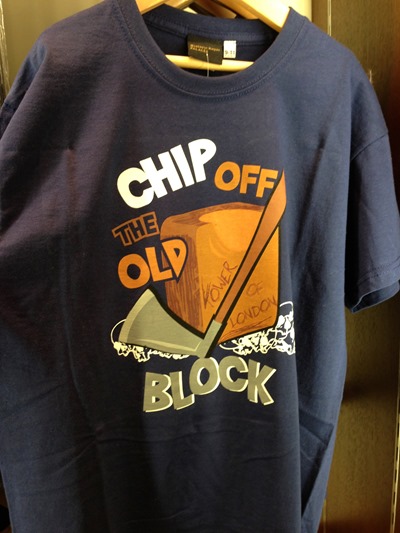 Speaking of beheadings (weren’t we?), the Tower Green outside now has a specially commissioned glass memorial to mark the spot where Anne Boleyn (and a handful of others) were beheaded.  It was rather eerie and solemn in the rain. 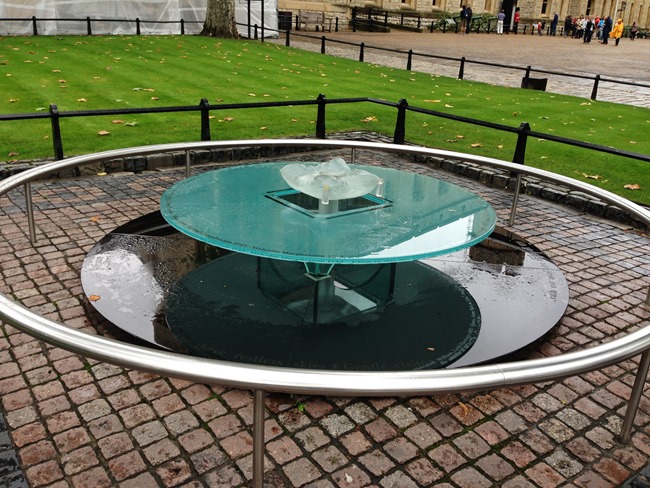 Directly behind the memorial was a bench with a raven (although he’s not always right there).  I told you they were huge.  I was really tempted to sit on the bench for size comparison, but decided against it. 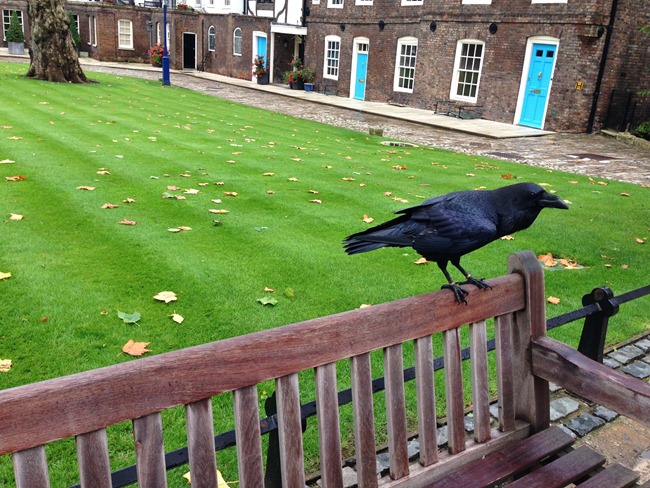 Beauchamp Tower was one of the main sites of imprisonment at the Tower, even as recently as the 1950s when two notorious London gangsters were held there!  The walls of the room upstairs, where most prisoners were held, were covered in “graffiti” that was left there by those who had a lot to say, or just a lot of time on their hands. 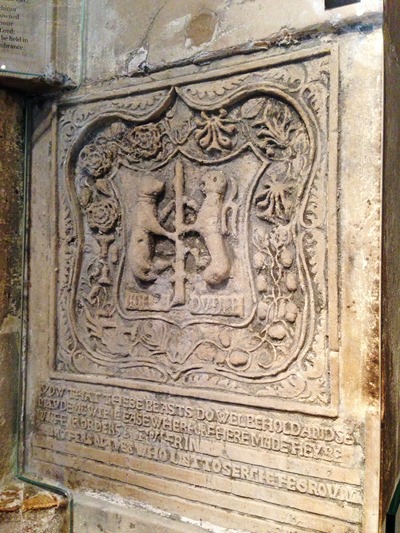 I feel like it’s crazy to call that sort of thing graffiti, but I guess technically it was unauthorized vandalism at the time!  It’s also pretty cool that its historical significance was recognized in time for it to be preserved and appreciated.

We also took in the exhibit on Torture in the Tower.  It was extremely interesting to learn about the history, but I’d feel like a creep posting a picture of the Rack here… too weird.  We decided to lighten the mood by leaving the torture chamber and popping in to an old guard’s quarters, complete with an old guard’s hat that you could try on to see how heavy it was.  Amity models: 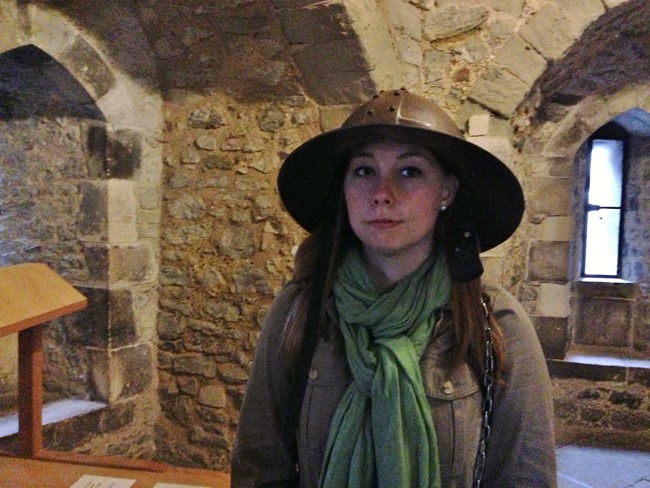 We continued on to the Bloody Tower, which is where the two princes were imprisoned by their uncle.  It got its name after their disappearance because it’s believed to be where they were murdered, though their bodies were then hidden elsewhere.  Almost two hundred years after the little princes, the Bloody Tower was also where Sir Walter Raleigh was imprisoned three different times, once for thirteen years with his wife and children.

The Bloody Tower links to the Wall Walks, which run most of the perimeter of the Tower of London and gave us another view of my architectural love interest: 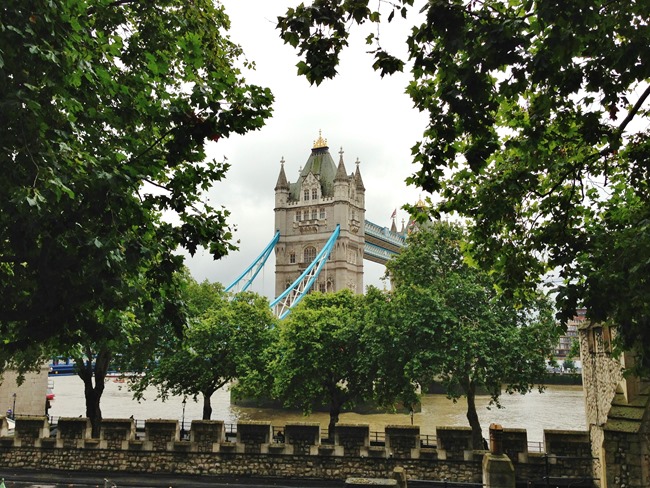 By that point, we had spent over four hours exploring the Tower and had checked just about everything off the map.  Oh, and we were starving.  Luckily, the onsite café had some pretty fine lunch offerings, so after soup and lasagna and royal blood velvet pie (it was blackberry, don’t worry, I’m not sure why that’s what it was called), we felt much better.  See?  Happy faces. 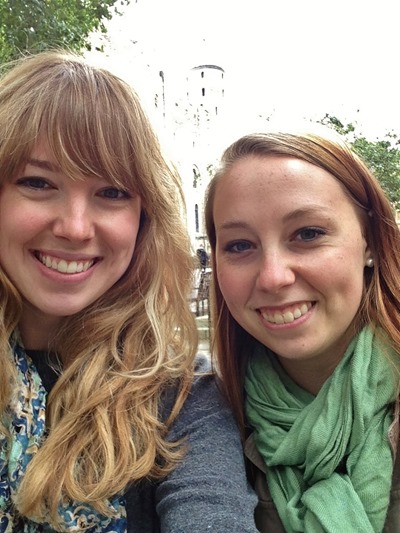 Yikes, this has gotten super long, sorry.  There was just so much to see!  We really could have spent all day here, but Amity and I were both getting really cold because of the dreary weather, and the human attention span can only stand so much.  Still, we really enjoyed our full morning of exploring, and I’m glad we got to experience one of London’s most significant landmarks.

Happily fed, we took a final glance at the majestic White Tower and headed home. 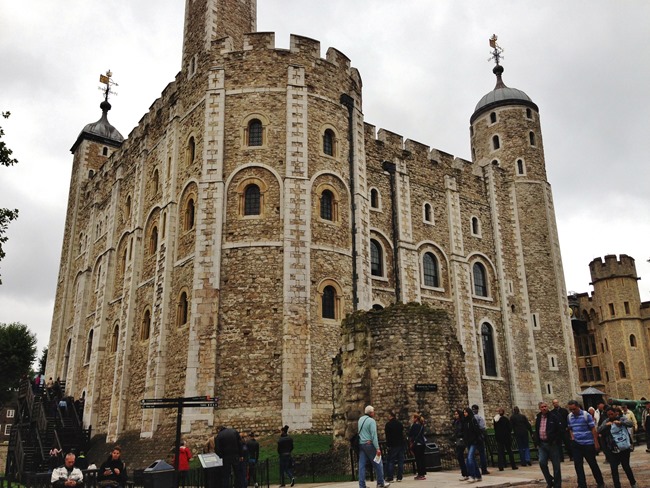 Now I’m just itching to climb Tower Bridge.  What spell has that place put on me?

4 thoughts on “Tower of London”